LOS ANGELES — The Washington Wizards are a mess.

While it's not surprising that they aren't among the elite squads in the Eastern Conference after finishing last year in eighth place at 43-39, they should be a lot better than 2-8. Their 110.2 points per game are on par with most franchises, but they are yielding a miserable 120.5 points, worst in the league.

What can they do to fix what appears to be a broken situation?

"They need Jesus," one executive said.

"I wish I knew," one agent answered.

With a pair of star guards in John Wall and Bradley Beal, shouldn't the Wizards be on par with the Portland Trail Blazers, who are 8-3 behind a somewhat similar backcourt duo of Damian Lillard and CJ McCollum?

The short answer is no, because the Blazers play defense.

Typically, the coach is the scapegoat. In his first year with the club in 2016-17, Scott Brooks led the Wizards to their best record in decades with 49 wins before a solid playoff run to Game 7 of the second round. Last season's 43 wins weren't bad given Wall missed half the year with a knee injury.

Per Candace Buckner of the Washington Post, Brooks is likely safe.

Despite a 2-8 start, Scott Brooks has the loyalty of the locker room and even more, the security of coaching in Washington. Brooks's coaching seat isn't even close to being lukewarm. Why? Let me explain: https://t.co/cmAV0F30yH

"I don't think it's solely on [Brooks]," Buckner told Bleacher Report. "I don't think they're this bad, but when they're playing like this, what else can you call them at this point?"

"You'd think they'd have figured it out, how to play together," she continued. "That they keep regressing is alarming."

Losing new acquisition Dwight Howard for training camp and the preseason to a glute injury set the team back. Howard, Jeff Green and Austin Rivers were the Wizards' primary offseason acquisitions, and the team is 1-2 since Howard's debut.

"In the three games [Howard] has played, the first nine minutes were a revelation," Buckner said. "The next game he was plus-27; then Dallas happens [a 19-point loss], and they can't make shots, they don't defend."

From the outside, the Wizards don't look like a team that enjoys playing together.

"It isn't Brooks or the roster," a video analyst said. "They just hate each other, or at least they play like they do. I think Wall needs to change the way he plays—get off the ball early and get it back later in the clock and attack, like Tony Parker [when he was with the San Antonio Spurs]."

Whether the team is irreparably broken is unclear.

The ideal step for Washington is internal improvement, given the team's hefty investment in the roster. Otto Porter Jr. is the highest-paid player at $26 million, followed by Beal at $25.4 million and then Wall's $19.2 million. Next year, Wall's $171 million extension kicks in at $38.2 million in the first year.

If Howard opts out of the second year on his deal of $5.6 million, the Wizards will still have over $111 million in guaranteed salary next year in just five players (Wall, Beal, Porter, Ian Mahinmi and Troy Brown Jr.). The NBA projects a salary cap of $109 million, so the core three really need to thrive together.

At their current salary, Washington will pay $12.2 million in luxury taxes for what has been a disappointing roster, which begs the question: should the front office look to trade Wall, Beal and/or Porter?

"If they can find a Blake Griffin-type trade [like the Los Angeles Clippers found last year], that would be a start," the executive said. "I can't see them getting back a huge return of assets because the biggest asset is getting off [Wall's] salary."

Making matters worse, Wall has a 15 percent trade kicker that would yield another $19 million to $21 million if he's traded at some point before the February trade deadline, increasing his total contract to roughly $210 million. That's an astronomical penalty, and while he can waive that bonus, why would he?

If the Wizards wait to trade Wall after the season, starting in July, the trade-bonus factor becomes moot since he's set to earn well over the NBA's projected $32.7 million maximum salary for a player with nine years of experience. In other words, a Wall trade probably isn't in the cards this season unless he's desperate enough to leave Washington that he waives the kicker.

"I don't know if he's as fast [as he was before the injury]," the video analyst said. "But he is still pretty damn quick."

Would the Detroit Pistons consider a massive investment in Andre Drummond, Griffin and Wall, with Reggie Jackson the key piece going to Washington? Wall is the better player, but Jackson is earning "just" $18.1 million next season.

How about the Phoenix Suns? They badly need a point guard and have a relatively movable contract in Ryan Anderson (less than $16 million of his $21.3 million contract is guaranteed next season) along with TJ Warren, who is in the first year of a four-year, $47 million to $50 million extension. The Wizards would need more in return, and such a move would leave them without a starting point guard.

"I always just think the bedrock of the franchise is Beal and Wall," Buckner said. "Otto is a guy who just now and then hits threes, scores 19 points, defends well but is he a game-changer?"

Porter has two years left on his deal but can opt out of his $28.5 million salary for 2020-21. He also has a 15 percent trade bonus, but since he is currently earning more than the five-year max salary of $25.5 million, the kicker wouldn't apply. At just 25 years old, he'd be a strong get for any contending team needing a wing defender who can hit the three, but he's not cheap.

If the Wizards did look to move Porter, they would need to get depth in return if they hope to compete around the Wall/Beal tandem. Speculatively, perhaps a team like the Brooklyn Nets might have interest, with players like Allen Crabbe, DeMarre Carroll and Kenneth Faried to help match Porter's salary, along with a young guy like D'Angelo Russell or Rondae Hollis-Jefferson. Don't forget it was the Nets' offer sheet in July 2017 to Porter that Washington matched.

Would the Dallas Mavericks entertain moving Harrison Barnes, who can opt out of the final year ($25.1 million) of his deal after the season? Would a Barnes/Porter swap move the needle for the Wizards?

Beal is probably their most attractive player to offer teams. He has two additional years on his deal for $55.8 million, but he's only 25. He's hitting just 33.7 percent of his shots from three-point range this season but has a career average of 39.1 percent.

Would the Los Angeles Lakers short-circuit their youth movement to add a more experienced scorer next to LeBron James? After Dec. 15, players like Kentavious Caldwell-Pope, Michael Beasley and Lance Stephenson can be traded. The Lakers would probably need to include at least one of Lonzo Ball, Brandon Ingram or Kyle Kuzma, though.

Note that Caldwell-Pope can block a trade since he re-signed with the Lakers on a one-year deal, and his $12 million salary would be a significant piece to help match salaries with Beal.

The Minnesota Timberwolves are in limbo with Jimmy Butler, who has demanded a trade. Butler would add a defensive presence, along with his ability to score. If the Wizards are willing to give up Beal, they'd need assurances that Butler was willing to re-sign.

Unlike Wall, who has such an expensive contract, the Wizards would probably find a long list of teams interested in Beal. He's also the player they probably prefer to keep most.

In a perfect world, they'd like the roster they have now to work out.

"In the LeBron-less East, they thought they could compete with Boston, Toronto and Philadelphia," Buckner said. "I still think they have a good squad. When Kelly [Oubre Jr.] can play with that small-ball lineup, they're really good ... that's on Scott Brooks to find the rotation."

The Wizards didn't give Oubre an extension before the season, so he'll be a restricted free agent next summer, as will guard Tomas Satoransky and center Thomas Bryant. The team will also have several unrestricted free agents in Markieff Morris, Jason Smith, Rivers and Green.

While the luxury-tax threshold is expected to climb to $132 million next season, the Wizards could easily reach that figure if they bring back key rotation players like Oubre and Morris. The long-term prognosis for the franchise could look like the short-term dilemma, with a lot of money invested and little to show for it.

Given some time to integrate Howard and a more home-heavy schedule, they should climb in the Eastern Conference. But at this point, there's no reason to believe they're on par with the Celtics, Toronto Raptors, Philadelphia 76ers, Indiana Pacers or Milwaukee Bucks.

The solution isn't obvious. Firing Brooks won't suddenly give the team depth and defensive acumen. Chemistry takes time, and if it continues to be elusive, Washington should start to aggressively break apart its core.

Regardless, the Wizards need to listen to offers and explore the trade market, both now and when Wall's trade bonus is less of an obstacle. 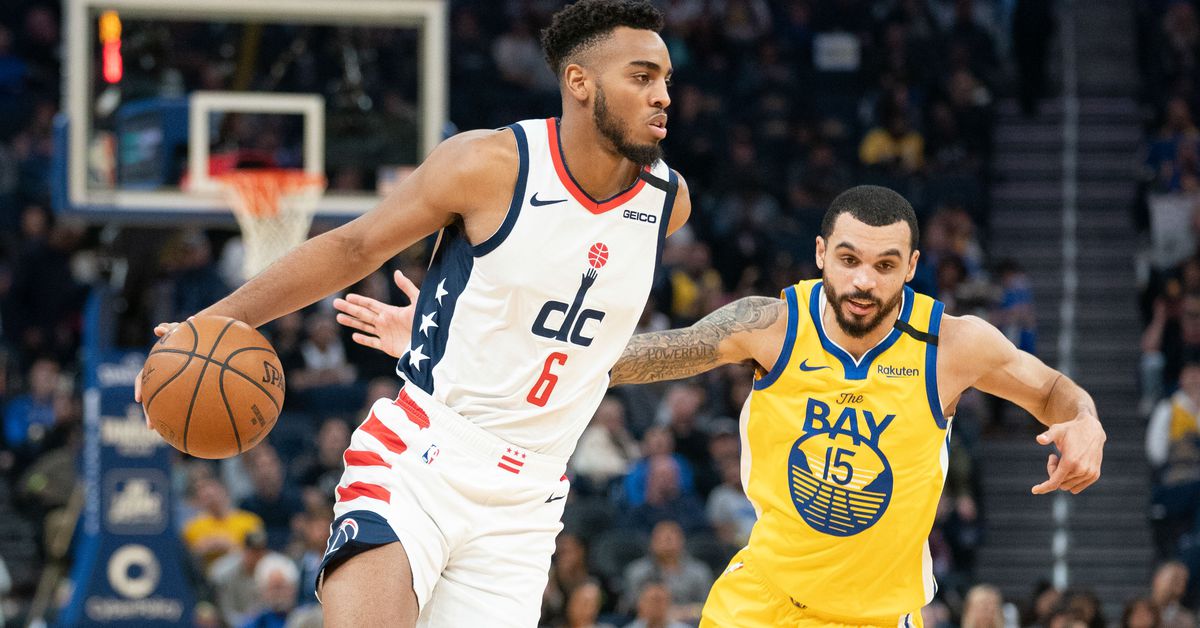