Over a month has passed since news spread of Jimmy Butler's trade demand from the Minnesota Timberwolves, and his next destination remains a mystery. The situation may play out in a number of ways, expected or unexpected.

Butler has agreed to play for the team while he waits for Minnesota to honor his trade request. But he sat out Wednesday's game vs. the Utah Jazz, which some view as a pressure tactic, as suggested by The Athletic's Shams Charania.

Jimmy Butler is taking next step in six-week-long process aimed at getting the All-Star out of Minnesota by sitting tonight against Utah, and could lead to extended absence for Butler, league sources tell me and @JonKrawczynski.

But Butler denied that was his motive to ESPN's Rachel Nichols.

It would behoove the Timberwolves to resolve this as quickly as possible, but they shouldn't rush at the expense of a better return for Butler. He is arguably their best player, acquired last year from the Chicago Bulls for Zach LaVine, Kris Dunn and Lauri Markkanen. The Timberwolves gave up a lot. They may never recoup their losses, but a good Butler trade could salvage some of the team's future.

The following is a list of possible resolutions to the Butler saga, in no particular order: 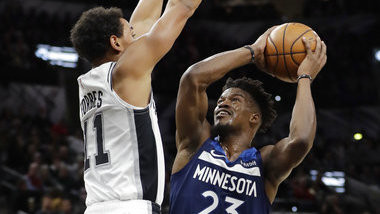 Let's get this one out of the way. It appears unlikely that Butler and the Timberwolves work out their differences, but it's certainly one of the many possibilities. Butler is expected to opt out of his final year at $19.8 million next summer. Minnesota can pay him roughly $190 million to stay over the next five years. It's a safe bet to say this won't happen.

Wolves Lose Butler for Nothing

After the Feb. 7 NBA trade deadline, if the Timberwolves haven't traded Butler, they're likely to lose him over the summer without anything to show for the All-Star wing. He can sign outright with any team willing and able to meet his price, although the most another team will be able to offer is roughly $141 million over four seasons.

Opt-In and Trade or Sign-and-Trade

Like a reconciliation, a summer Butler trade is unlikely. He'd have to opt in to his contract, contingent on a trade, but then he'd be paid a below-market $19.8 million for 2019-2020 rather than signing for significantly more on a new deal, which is undoubtedly a non-starter. Butler could also opt out then agree to a sign-and-trade, but since nearly half of the league will have ample cap space, this would only be a favor to Minnesota, and it's hard to imagine Butler caring about that.

If the Timberwolves don't land a deal, they may be willing to cut Butler loose before the end of February, especially if he's willing to accept less than his contracted $20.4 million. But Minnesota will (in theory) do its best to get something done before this contingency, right?

If nothing has happened yet, Minnesota can pay Butler to go away after the March 1 playoff eligibility waiver deadline to prevent him from joining another team for a postseason run.

This appears to be the goal for coach and president of basketball operations Tom Thibodeau, per several front office executives. Not that Minnesota will go after San Antonio's All-Star guard DeRozan, but a package similar to what the Spurs got in return for Kawhi Leonard. It's widely believed that Thibodeau is less interested in draft picks as the primary return, and that he prefers players who can help his team win now.

Some of the names he's said to be chasing include Houston Rockets guard Eric Gordon, Philadelphia 76ers anomaly Ben Simmons (which is a non-starter for Philly) and Miami Heat wing Josh Richardson. Houston has reportedly discussed sending four first-round picks to Minnesota for Butler, but several NBA executives question if that's accurate. Certainly, if Gordon were included, the Rockets wouldn't be sending four unprotected picks to Minnesota.

The Sixers could build a trade package around Wilson Chandler and Jerryd Bayless, perhaps including the unprotected rights to Miami's 2021 first-round pick. Chandler is certainly a significant step down from Simmons, and while the draft pick should hold value, it may not appeal to Thibodeau.

The Los Angeles Clippers have been tied to Butler, perhaps Minnesota would have interest in Danilo Gallinari or Tobias Harris. Gallinari is still owed another $22.6 million for next season, while Harris has an expiring contract. Yahoo Sports Chris Haynes recently reported that the Clippers "do not intend to trade Harris."

The Raptors seemed to come from out of nowhere in the Leonard deal. When a team reaches a standoff with a player, it can often be an unexpected team that swoops in under the radar.

The Washington Wizards are off to a slow start. Could John Wall or Bradley Beal interest Minnesota? Would Butler give Washington an assurance he's willing to re-sign?

Would the Portland Trail Blazers break up their Damian Lillard/CJ McCollum backcourt for Butler?

The Los Angeles Lakers can get into the conversation in mid-December with Kentavious Caldwell-Pope's $12 million expiring contract (when he's trade-eligible), although the veteran guard can block a trade should he choose (via the league's One-Year Bird rule). Would the Lakers move one of their younger players like Brandon Ingram to get an established star next to LeBron James? They're probably more likely to wait until the summer, when they'll have cap room to sign another big-name player.

Like Caldwell-Pope, most free agents who signed contracts this past summer cannot be traded until Dec. 15. Minnesota's potential menu of trade targets will increase substantially in six weeks.

If Timberwolves owner Glen Taylor loses faith and patience, perhaps he'll remove Thibodeau. If Minnesota is no longer fixated on a playoff berth, it might be willing to take a future-based package of draft considerations.

And in that case, the Timberwolves could accept Houston's four first-rounders without any significant players players attached, outside of salary matching (like Brandon Knight's remaining two years and $30.3 million).

For now, the Timberwolves are in ninth place in the Western Conference at 4-4. They play the first-place Golden State Warriors at 10:30 p.m. ET Friday, and Butler is scheduled to suit up in his Wolves blues. How many more times will we say that? I guess we'll just wait and see.