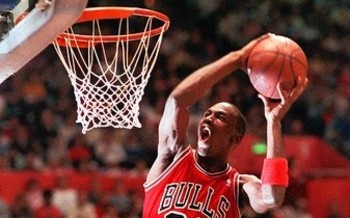 No question about that.

He could score like no tomorrow. Provide blanket defense. Shoot for high averages. Slam it home over opponents from far distances. Make big shots. Block. Steal. You name it.

Without question, Jordan's best years were on the Chicago Bulls. But how would they rank from worst to first if they were collectively evaluated?

Even though his "worst" seasons were still great, this article will attempt to rank his seasons as a Bull.

Regular and postseason performances will be considered in making the rankings. 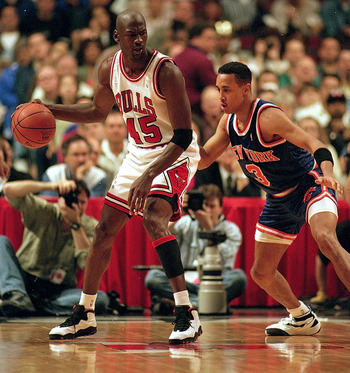 Michael Jordan came out of his 19-month retirement to help aide the Chicago Bulls to playoff glory.

However, Jordan showed signs of rust and could not shake that off come playoff time, where the Bulls lost to Shaq and the Orlando Magic in the Eastern Conference semifinals.

Michael played 17 regular season games. He averaged 26.9 points, 6.9 rebounds and 4.5 assists. His 41.1 field goal percentage was the lowest of his entire career, but he did have the legendary 55-point game against the New York Knicks.

His Airness played only 18 games due to a severe broken foot.

Instead of sitting out that season, Jordan pushed management and the coaches to play for a playoff spot.

In three playoff games against the mighty Boston Celtics, Michael averaged an astounding 43.7 points, 6.3 rebounds and 5.7 assists on 50.5 percent shooting.

He also dropped 63 points in Game 2, the highest total in playoff history.

Being the third player drafted in 1984, much was riding on Michael to turn the Chicago Bulls around.

Boy, did he produce immediately.

Having one of the most dominant rookie seasons ever, MJ averaged 28.2 points, 6.5 rebounds and 5.9 assists a night, propelling him over Hall of Famer Hakeem Olajuwon for the Rookie of the Year Award.

Jordan's player efficiency rating was 25.8, the NBA's second best that year. He also had 14 win shares.

In MJ's third season, he was determined to come back from his horrible foot injury, and he made a tsunami of a comeback.

His Airness scored a career-high 37.1 points a night, the sixth-highest average in NBA history. Only Wilt Chamberlain and Elgin Baylor had higher averages.

His player efficiency rating was 31.7—his career high. He led the league in win shares with 16.9.

While his Bulls were swept by the Boston Celtics, Mike dished out 35.7 points, seven boards and six assists. However, he shot a playoff low 41.7 percent from the field.

This is where it gets a bit sticky with ranking Michael's seasons.

Even though MJ secured a championship and was league MVP, it was not his best season.

Jordan dropped 28.7 points, 5.8 boards and 3.5 assists while shooting 46.5 percent a night during the regular season. However, his player efficiency rating was fourth highest in the league (25.2) and he had 15.8 win shares, the second lowest during his Chicago tenure.

Come playoff time, Mike was a beast. He averaged 32.4 points, 5.1 rebounds and 3.5 assists in 22 games, including nailing the title-winning shot over Bryon Russell.

Michael had a stellar playoffs. In 19 contests, His Airness scored 31.1 points, collect 7.9 rebounds and dish out 4.8 assists while draining 45.6 percent of his jumpers.

His most memorable game came in Game 5 of the NBA Finals while combating the flu. He exploded for 38 points, seven rebounds, five assists, three steals and a block. This performance gave Chicago a big 3-2 lead in the finals, which the Bulls won the following game.

Having a bitter taste in his mouth after his 1995 playoff run ended roughly, MJ vowed he would work harder to improve himself.

Jordan worked out all summer and gained 18 pounds of muscle to his frame because he realized he needs to be more physical.

He also poured over his fade away jumper so he wouldn't have to slash his way to the hoop all the time.

Jordan was well deserving of the MVP Award, leading the league in player efficiency (29.4) and win shares (20.4) as he led the Bulls to a record 72 wins. He also was ninth in defensive rating (99.6).

Winning one championship was not enough for Michael Jordan. His goal was to defend Chicago's title.

Jordan dominated again in the playoffs, scoring 34.5 points, having 6.2 boards and 5.8 assists in 22 games. He shot 49.9 percent from the field and scored 759 playoff points—a career best.

Against the Portland Trail Blazers in the finals, MJ poured on 35 first-half points one game. He was so incredible that he had to only shrug at his proficiency.

In 1992-1993, everyone was gunning for the two-time defending champions.

So, MJ had to raise to the occasion once again, playing one of the best seasons ever without winning the MVP Award.

Michael Jordan led the Bulls to a 47-35 record on while playing at the top of his game.

He averaged 32.5 points, eight rebounds and eight assists while stealing 2.9 balls a game. Jordan shot 53.8 percent while leading the NBA in player efficiency (31.1) and win shares (19.0).

In the playoffs, Michael led the Bulls to series wins over the Cleveland Cavaliers and New York Knicks before falling to the eventual champion Detroit Pistons in the Eastern Conference finals. Jordan's series-clinching buzzer beater against Cleveland is one of the NBA's most iconic shots ever.

In 19 playoff battles, MJ averaged 34.8 points, seven boards and 7.6 assists while nailing 51 percent of his shots.

Michael topped off his huge third season with one of the best years in NBA history.

This season, Michael won his first MVP Award, made All-NBA first team and his first NBA All-Defensive first team and claimed his only Defensive Player of the Year Award with the sixth-best defensive rating (101.5).

His 31.7 player efficiency was a career high and sixth best all time. He also led the NBA in win shares with 21.2, another career high.

Air Jordan led the Bulls to a first-round victory over the Cleveland Cavaliers but lost to the Detroit Pistons in the conference semifinals.

In the regular season, Jordan methodically tore NBA players apart. He won another scoring title with 33.6 points a night on 51.6 percent shooting.

Michael Jordan's first championship season was by far his best as a Chicago Bull.

During the regular season, MJ led the league by scoring 31.5 points a night. He also had six boards, 5.5 assists, 2.7 steals while shooting a career-high 53.9 percent from the field.

His 52.4 percent shooting was his second-best playoff showing.

The above video shows MJ doing some nifty layup through Los Angeles Lakers defenders during the finals. Even the hyper-competitive Magic Johnson had to give him some love.

Bob Bajek is a second-time writing intern at Bleacher Report. He is also a freelance reporter and can be followed at Patch.com and Twitter.