NEW YORK — The Knicks fired their head coach Friday, because of a ghastly record and a bunch of other reasons that could fill the next several paragraphs. But that would be a waste of time.

This latest Madison Square Garden calamity isn't really about David Fizdale's coaching acumen or his playbook, his rotations or his player-development skills. It isn't even really about Fizdale. Or that Jenga-puzzle roster he was dealt.

No, it's about James L. Dolan. At the Garden, it's always about Dolan.

No NBA owner hires and fires coaches and executives as frequently as Dolan. No NBA owner consistently incites as much havoc and instability. No NBA owner has so profoundly squandered a natural resource as Dolan has in his feckless 20-year stewardship of a once-proud franchise in the NBA's glitziest market.

Fizdale is the eighth coach to be fired by the Knicks since 2004 (not counting interim coaches). Some arrived with stellar credentials (Lenny Wilkens, Larry Brown, Mike D'Antoni), others with an air of promise (Derek Fisher, Jeff Hornacek, Fizdale). All left New York worse off—their bank accounts fatter, but their reputations in tatters.

The Knicks have hired and fired five lead basketball executives since 2004, including legendary NBA figures from Isiah Thomas to Donnie Walsh to Phil Jackson. All departed under clouds of various shapes, sizes and despairing shades of gray.

Maybe it will be different for the next guy. Maybe the Knicks get lucky and lure a gifted executive like Toronto's Masai Ujiri to fix this mess. Some NBA sources believe it's possible. 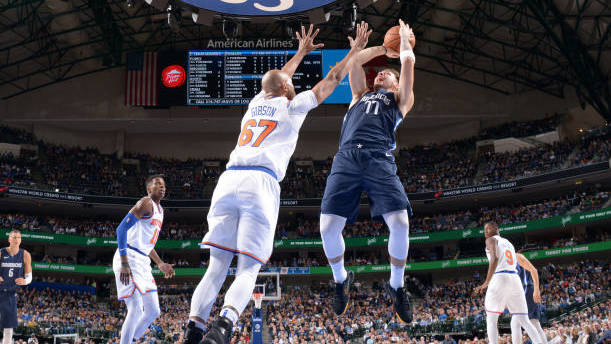 But on Friday, it was Fizdale's turn to take the fall. He arrived with great promise, steeped in the Miami Heat's winning culture, with endorsements from LeBron James and Pat Riley himself. He leaves as a diminished figure, carrying a 21-83 record after less than two seasons at the helm of a comically poor roster.

That roster was forged by team president Steve Mills and his general manager, Scott Perry. And Mills, of course, was handpicked by Dolan, who has hired, re-hired and/or promoted Mills three times since 2003, with consistently poor results.

Mills played basketball at Princeton, but he came to the NBA as a business executive, first at the league office and then at the Garden. He never worked a day in basketball operations until Dolan—suddenly and inexplicably—fired GM Glen Grunwald in September 2013 and replaced him with Mills, who had been out of the league for four years.

Six months later, Mills was demoted to a secondary role to make room for Jackson as team president. Jackson, one of the greatest coaches in NBA history, also had zero experience as a front-office executive. He might have had a chance if he'd had a seasoned GM working with him, but he was saddled with Mills—one rookie leading another. No other NBA team would have hired either one in those roles.

David Fizdale's firing drew an outpouring of relief on social media from players around the NBA.Gregory Shamus/Getty Images

Dolan wanted Mills because Mills was an indefatigable loyalist. He wanted Jackson for his resume and to serve as a human shield when things inevitably imploded. ("Hey, you can't blame me; I hired the guy with 11 rings!")

Along the way, Dolan—with the assistance of some credulous media and fan blogs—cultivated the perception that he was no longer meddling in the team's affairs, as he had infamously done in the past, hijacking the Carmelo Anthony trade negotiation in 2011 and forcing Grunwald to acquire Andrea Bargnani in 2013.

And when the Knicks had a chance in 2017 to hire David Griffin, a smart, savvy basketball executive who wanted the job, it was Dolan who torpedoed it by insisting that Mills and the rest of the basketball ops staff remain. Griffin rightly balked.

It was Dolan who ejected Charles Oakley from the Garden and Dolan who ordered a subsequent press release that needlessly insulted the former Knicks legend. No, that ugly scene was not, strictly speaking, a basketball matter, but Oakley is a beloved and admired figure among current NBA players, and they were just as aghast as fans were to see him treated so poorly.

That's become a running theme in Gotham too. Witness the way the Knicks ostracized and dumped Carmelo Anthony, then Kristaps Porzingis. Or the way Dolan didn't fight to keep Jeremy Lin in 2012 after Lin had provided a rare spell of unfettered joy to the Garden.

Players notice these things. They remember. Today's players are savvier than ever about the franchises that employ them. They know which teams run smooth operations and which foster chaos and discord. There's a reason the Lakers, Clippers and Nets all landed multiple All-Stars in the last two offseasons, while the Knicks landed none.

It was Dolan who raised false hopes for Knicks fans last spring, by going on radio and foolishly predicting that superstar free agents would soon be signing here. It was almost certainly Dolan who ordered Mills and Perry to issue a bizarre statement to fans on June 30 after those stars all snubbed the Knicks.

It was certainly Dolan who ordered Mills and Perry to hold a panicky postgame press conference in early November after the Knicks fell to 2-8. It was a destabilizing event, undercutting Fizdale and igniting 24/7 speculation about his job security. (It was also unusual because Mills and Perry rarely speak to the media at all—because Dolan doesn't allow it.)

And you can bet it was Dolan who ordered the (widely mocked) tweet last week in which the Knicks rebutted a comment—clearly delivered in jest—by ESPN commentator Richard Jefferson. Only Dolan could have missed the joke or insisted on a response.

Fizdale was not effective in his brief tenure with the Knicks. But he hardly was given enough talent or time to establish anything. In assessing the Knicks' ills, rival scouts, coaches and executives all point the finger at the owner and the front office first.

"It's a systemic issue, not a coaching problem or a front-office problem," one rival executive said.

It was telling how many NBA figures expressed joy for Fizdale on the occasion of his firing, as if he'd been freed from a witch's curse.

There was Reggie Miller:

I’m actually happy for Coach Dave Fizdale, he’s a good man who’s was dealt a terrible hand with the Knicks.. But he’s not the only one who should be shown the door.. #KnicksStink

Even Democratic presidential candidate (and disillusioned Knicks fan) Andrew Yang weighed in, tweeting: "David Fizdale is the lucky one. The fans are still stuck with this team."

There are only two ways this calamitous cycle ends: Either Dolan sells the team (but don't say that out loud; he'll have you banned from the Garden) or he finally hires a proven, successful, sharp-minded basketball executive, hands him absolute authority to clean house and rebuild the organization and—this time—truly gets out of the way.

Sources say Dolan is indeed enamored of Toronto's Masai Ujiri, who has twice fleeced the Knicks in trades (again, see Anthony, Carmelo and Bargnani, Andrea) and who last June presided over the first championship in Raptors history.

Sources also say Ujiri would be intrigued by the challenge of fixing the Knicks, the chance to build something from scratch and, not insignificantly, by the opportunity to elevate his Giants of Africa philanthropy by working in the New York market.

Influential voices in the NBA have strongly advised Ujiri not to take the job, if it's ever offered, sources say. But those same sources say Ujiri might do it anyway, if the money is right, if he's granted the necessary autonomy and if Dolan funds Giants of Africa as generously as the Raptors ownership group has.

Ujiri's contract is believed to run through 2021 but with an out clause under certain circumstances. He turned down a lucrative extension last summer, sources said, leaving the impression that he wants to keep his options open.

While the lack of autonomy the Knicks have offered their executives in running the team likely would prevent Raptors president Masai Ujiri from taking over the team, the opportunity to expand his African youth sports program might compel him to reconsider.Ron Turenne/Getty Images

If not Ujiri, maybe Oklahoma City's Sam Presti. Or Portland's Neil Olshey. Or Indiana's Kevin Pritchard. There are plenty of seasoned, capable GMs out there, if Dolan can break his old habit of hiring only loyalists or celebrities and if he's willing to give the next GM the necessary authority. That's still a big "if."

"Doubt he wants what a good GM will bring," said one veteran executive. "Disagreement. Pushback. Different decisions than he might want."

But the job will always hold appeal, because the Knicks can outspend anyone, and the Garden still exudes a certain mystique.

As another executive said, "There is no larger platform."

Eventually, there will be a new coach, a new team president, a new purported savior, stepping in where Thomas-Brown-Jackson-D'Antoni-Walsh-Fizdale failed. There will be press conferences and promises and talk of a new culture, a new era. There will be a glimmer of momentary hope, inevitably obliterated by dysfunction and despair. It's the Garden way. It's Jim Dolan's enduring legacy.

Howard Beck, a senior writer for Bleacher Report, has been covering the NBA full time since 1997, including seven years on the Laker beat for the Los Angeles Daily News and nine years as a staff writer for the New York Times. His coverage was honored by APSE in 2016 and 2017, and by the Professional Basketball Writers Association in 2018.

NBA veteran Jamal Crawford returns to “The Full 48 with Howard Beck” to discuss his 51-point game, what he would do if he was the commissioner, what he thinks of the potential changes to the NBA schedule and if he'll ever retire.