In their never-ending quest for semi-success, the Washington Wizards have been playing much better since five-time All-Star John Wall went down with a season-ending heel injury. They're 6-4 since Wall played his last game, and that includes recent victories over the Sixers and Bucks and a two-point double-overtime loss to the Raptors on Sunday.

Bradley Beal has been on an absolute tear, including in Thursday's 101-100 victory over the Knicks in London, averaging 29.8 points on 45.7 percent shooting over the 10-game stretch. After a rocky 2-9 start and the associated histrionics, things seem to be looking up in the nation's capital—at least for the basketball team, which is only two-and-a-half games out of a playoff spot in the Eastern Conference.

Perhaps that's why owner Ted Leonsis felt good enough to proclaim before the Knicks game that he would never oversee a tank job, according to Candace Bucker and Scott Allen of the Washington Post.

Still, this is a franchise that has yet to reach the potential many envisioned with Wall and Beal in the same backcourt. It is a franchise with little ability to pursue significant help in free agency and a lot of difficult-to-move parts.

That's why is hasn't come as a surprise that a conga line of contenders have kicked the tires on Beal, by far the Wizards' most valuable—and most tradable—asset. Multiple team executives and agents tell Bleacher Report the impending Feb. 7 trade deadline is expected to be a busy one and that Beal's talent, sharpshooting, versatility, age (25) and contract (two years and $56 remaining) make him one of the most coveted assets in the marketplace. 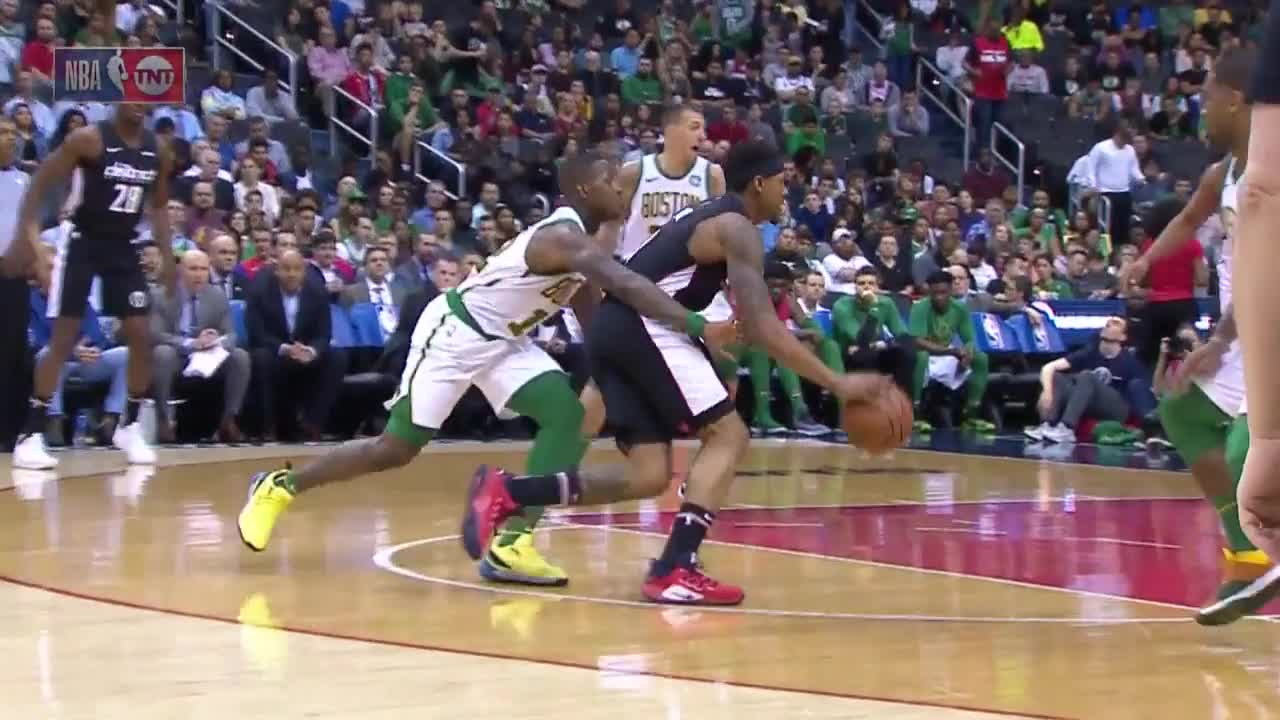 "There are so many teams in the mix trying to make that extra push that want Beal," a Western Conference executive told B/R.

But why would the Wizards trade a young, productive star on a reasonable deal? According to the rival executives and agents, the Wizards may not and have indicated no willingness to part with Beal.

The problem is Wall.

"Wall is unmovable," one of the rival executives told B/R.

As has been well-documented, Wall's four-year, $170 supermax extension kicks in next campaign, and his salary will nearly double from $19.2 million to $38.2 million. When he returns from his season-ending surgery to address bone spurs in his left heel, Wall, 28, will have played just 73 games over the previous two seasons because of injuries.

John Wall's spotty injury history and mammoth contract increase have made Bradley Beal the target of other teams' desires with the trade deadline approaching.Will Newton/Getty Images

Wall's contract also includes a 15 percent trade kicker, making the path to a deal almost impossible to navigate. According to ESPN.com's Zach Lowe, don't even think about a Wall trade before July 1 because of the complexities of what is believed to be the first trade kicker spread over a supermax contract.

Interestingly, though, the ball is moving much better without him. Wall's usage rate this season was 29 percent, which is consistent with where he's been the past four campaigns. But the Wizards' assists per game have gone up (from 24.9 to 27.9) without him, and so have their passes per game (from 279.1 to 325.2), according to NBA Advanced Stats.

"John and [James] Harden are the two guys with the ball in their hands more than anybody in the league," an Eastern Conference scout said. "It's hard to play with that."

So where does all of this leave the Wizards and Beal? It depends on how their season goes.

"Knowing Ernie [Grunfeld, the Wizards' general manager], he will hold on to him in a desperate attempt to make the playoffs," another Western Conference executive said.

But if things go south—and if the Wizards' repeated attempts to plug holes and make the playoffs for a third straight year prove futile—which teams are most motivated (and best equipped) to make a play for Beal?

In the East, Toronto and Boston are among the most motivated teams to come calling, for obvious but unique reasons. The Raptors have made it known in front-office circles that they're interested in adding an elite shooting guard, rival executives say. A package including Jonas Valanciunas, Delon Wright and a first-round pick might be a sensible starting point to the discussion, one of the execs said.

With the Celtics struggling to find an identity—and defined roles for their plethora of wing players—there could be a path to a deal. Jaylen Brown, the expiring contract of Marcus Morris or Aron Baynes (2019-20 player option) and a first-round pick would have the makings of a compelling offer, according to one executive. The C's could win the East with a core of Kyrie Irving, Beal, Jayson Tatum and Al Horford. Whether the Wizards would want to help Boston is another story.

And don't forget about the Pacers, who are not only third in the East but also have the pieces to put together an enticing trade package. Let's start with Darren Collison, Myles Turner and a first-round pick. The Wizards would get a point guard who could work for the rest of this season while Wall is out, plus Turner, a roll man who could work with Wall down the road (assuming the Wizards are, in fact, stuck with him). From the Pacers' perspective, adding Beal to a young core of Victor Oladipo, Domantas Sabonis, Bojan Bogdanovic and Thaddeus Young would make them even more formidable.

Despite the Wizards' slow start, Beal has put together his best statistical season, posting career numbers in scoring, rebounding and assists.Ned Dishman/Getty Images

In the West, the Lakers have to be part of the conversation because of the LeBron James factor, though it's not clear to rival executives whom they're willing to trade in any deal and whom they aren't.

"At one point a month ago, they were dangling Lonzo [Ball] a little bit, but now they don't want to trade him," one of the execs said.

Josh Hart, Ivica Zubac and Moritz Wagner are available, rival executives say, while pretty much everyone else is off the table. To get Beal, it's going to take a lot more than that.

The Mavericks have to be a consideration, given their current crossroads with 2017 lottery pick Dennis Smith Jr. Minnesota would at least have a conversation starter if they included Andrew Wiggins in the discussion (which executives say they're willing to do). Other borderline playoff teams like the Pelicans, Hornets and Magic also would have to be considered, though New Orleans and Orlando are more focused on upgrading at point guard, execs say.

What about Beal? His agent, Mark Bartelstein, is not looking for a trade.

Whether Beal does will have everything to do with if the Wizards are open for business on a trade-deadline deal for him…or not.