Though the Washington Wizards have shown signs of life since details of an ugly, contentious practice spilled out publicly last week, the long-term prognosis for the team remains grim.

No, this isn't the first long November that has prompted the question, "Is it time to blow up the Wizards and start over?" This time, though, the answer may be an unequivocal, "Yes." Cruelly, a more difficult question awaits.

The latest dysfunctional turn for the franchise in the nation's capital came with reports of multiple verbal flare-ups during a Nov. 17 practice that came after the team had won three of four, a stretch that ended, however, with an 11-point loss at Brooklyn. The most damning moments, according to multiple reports, came when All-Star John Wall barked, "F--k you" at coach Scott Brooks, and backcourt mate Bradley Beal vented: "I've been dealing with this s--t for seven years. It starts top-down." Beal's tirade was perceived as a shot at Ernie Grunfeld, who has been the Wizards general manager since, oh, forever (technically, 2003).

Wall apologized to Brooks soon after cursing at him and did the same with his teammates the next day. One team official told Bleacher Report that the five-time All-Star was "almost in tears" over the incident and realized he'd "made a mistake."

In retrospect, the Wizards may have made a much bigger blunder in signing Wall to a four-year, $170 million "supermax" extension, which kicks in next season—just as Wall, 28, appears to be on the decline. In 2022, when Wall turns 32, he will be making in excess of $47 million.

"Nobody will take that contract," a Western Conference executive said. 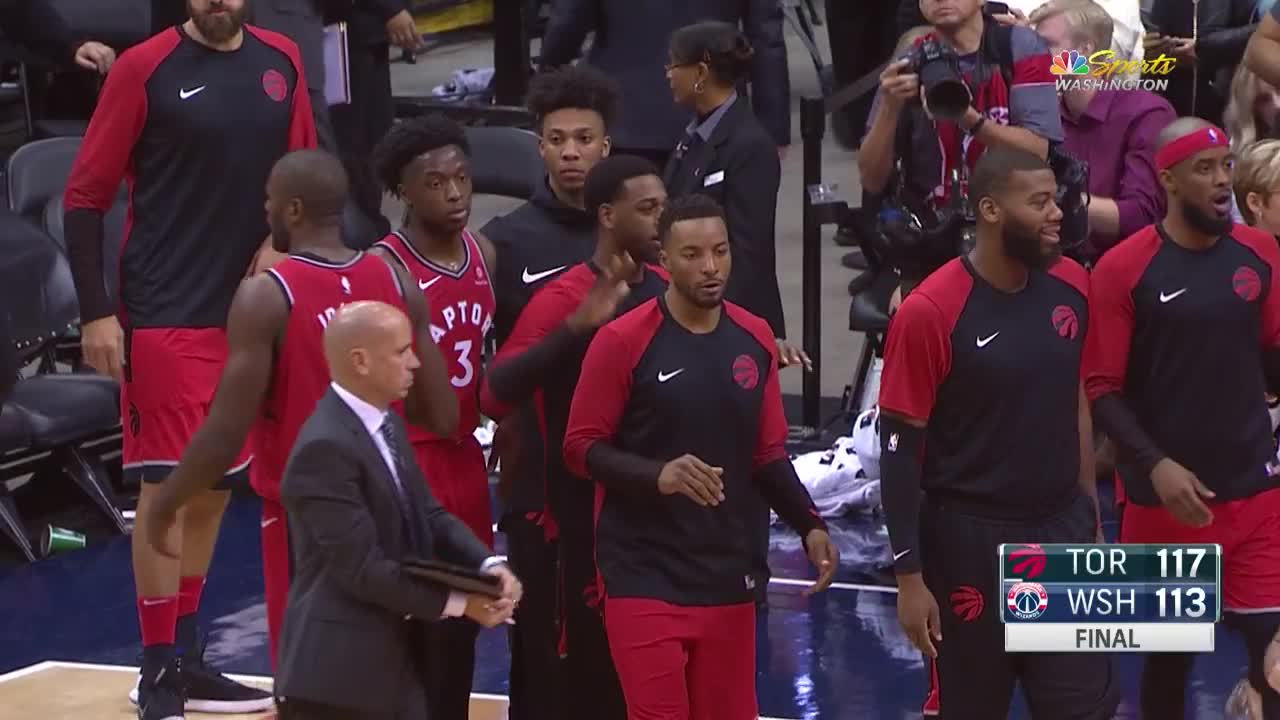 Well, as long as Robert Sarver owns the Phoenix Suns and James Dolan owns the New York Knicks, never say never. In fact, another rival executive claimed that Phoenix may be the one logical landing spot for Wall if Washington's longtime front-office duo of Grunfeld and Tommy Sheppard indeed decide, at long last, it's time to tear it down and start over.

To understand how difficult a path the Wizards face to get out of this mess, it's important to know how they got into it.

ESPN.com's Zach Lowe put it best: The Wizards as currently constructed are the result of a series of moves that, in isolation, seemed sensible and innocent enough at the time. But after nearly a decade of following a win-now approach, Washington is boxed in by current and future contracts coming home to roost.

Not only has John Wall's inability to get the Wizards in a winning rhythm been an issue this season, his back-loaded contract also poses a threat to the team's ability to build toward the future.Ben Margot/Associated Press/Associated Press

In addition to Wall's massive extension—his salary jumps from $19.2 million this season to $38.2 million in 2019-20—the Wizards have Beal and Otto Porter Jr. on max deals through '20-21 (Porter has a player option that season). If this were a core you could win with in the revitalized Eastern Conference, there would be little trepidation about dipping into the luxury tax to re-sign 2015 No. 15 pick Kelly Oubre Jr. when he hits restricted free agency next summer.

But do the Wizards, in fact, have a core they can win with in the East? This is a question they've been asking themselves for the entirety of Wall's eight-plus years in Washington; indeed, for much longer. They've made the playoffs in four of the past five seasons—justifying the seemingly sensible string of win-now moves, from Trevor Ariza and Marcin Gortat (both their additions and subtractions) to Nene Hilario and Markieff Morris. Yet Washington has not made it out of the second round since 1979. When does the payoff finally come?

While Grunfeld's moves, by and large, have been justifiable—given the string of playoff appearances that many other franchises should envy—they've also lacked a long view and creativity. Given all the flipping of draft picks for veterans, there was bound to be a dearth of young talent on the roster, not to mention a lack of tradeable assets.

These are the kinds of risk-reward calculations that NBA front offices make all the time. But with the Wizards, the problem cuts even deeper. They've tried wave after wave of complementary players to Wall and Beal, and it hasn't worked. Does there come a time when they wonder if they've been building around the wrong stars all this time?

With Wall and Beal's long injury history, notably tepid relationship and inability to guide the team past the second round of the playoffs, will the end game for a Wizards team led by this backcourt tandem ever be any different?

Already struggling to keep focused on the court, Scott Brooks also has found himself the target of his players' anger in practices.Don Juan Moore/Getty Images

As Wall came off a season in which he missed 41 games due to injury, the Wizards opened this year 1-7, which became 2-9. Wall's early-season fitness and conditioning levels have long been a concern for the Wizards, league sources said, but this time it was especially so. A few months earlier, Wall became the butt of #NBATwitter jokes when he appeared bloated and disheveled for his photo with Team USA.

"How do you show up for Team USA looking like that?" said one executive who was present for the workouts, estimating that Wall may have been as much as 30 pounds overweight at the time.

Nonetheless, the Wizards seem to be climbing out of their early-season troubles. There were those three wins right before all hell broke loose in that practice Nov. 17. And since the incident became public, Washington has gone 3-2 while averaging 119 points per game. The Wizards are 6-4 since the 2-9 start.

The awakening included a win over the surprising, West-leading Clippers and a 135-131 overtime win over the struggling yet presumptively championship-contending Rockets. Wall and Beal combined for 68 points against Houston, and Wall dished out 11 assists to go with his 36 points.

"Ask James Harden if John Wall is on the decline," one team source said.

All told, the Wizards aren't close to out of the playoff race and have only three fewer wins than the Celtics, who were supposed to have been among the favorites to emerge from the East with LeBron James now posting up in Staples Center.

But make no mistake—team officials are preparing for the possibility that things go the other way. If the evident lack of chemistry between Wall and Beal continues, as well as the knockdown, drag-out conflicts behind the scenes, the day may finally come to abort the win-now mission and "blow it up," as one of the rival executives put it.

As an old saying among NBA front-office personnel goes: "If you've dug yourself a hole, stop digging."

But what if the Wizards come to find out that they're just in too deep?

The problem starts with Wall and Beal, whose uneasy relationship has been well-documented over the years. Wall even admitted in 2016 that he and Beal "have a tendency to dislike each other on the court."

It's nothing new, really. Kevin Durant and Russell Westbrook weren't best friends. Harden and Chris Paul aren't either. Nor are Damian Lillard and CJ McCollum. But when personalities and playing styles don't mesh, it's always magnified when you're losing. And when those players are supposed to be the axis around which the rest of the team revolves, the tension can spread like a virus.

Amid reports that the Wizards are open to including Wall and Beal in trade talks, multiple executives told B/R that Washington is not shopping its All-Star backcourt just yet. But if the dysfunction continues, those sources say there's a realization among the team's decision-makers that a breakup could be inevitable.

Beal would have by far the most value in the marketplace, according to the rival execs. At 25, he's three years younger than Wall. Unlike Wall, he's a reliable three-point shooter. His max deal is also shorter (two years and $56 million remaining) and not of the supermax variety. Wall's deal also includes a 15 percent trade kicker, which could be a nightmarish obstacle to finding a trade partner for him.

Grunfeld could try to double down yet again on the Wall-Beal tandem by offering Porter and/or Oubre in an attempt to land a third star. But ESPN.com reported that those players have drawn little interest.

Or they could take another approach. If the Wizards find that Wall is, in fact, untradeable, they could part with Beal—who would yield the most assets anyway—and use the move as a tipping point to challenge Wall to finally lead the team the way a five-time All-Star and supermax player should.

"That's what I would do," one of the rival executives said. "You tell Wall: 'See, we traded the guy you don't like. Now it's your team.'"

Minnesota and San Antonio are two teams that one of the rival execs said would be interested in discussing a trade for Beal. For the Timberwolves, he would serve as a replacement for Jimmy Butler. For the Spurs, he would provide more scoring punch and a three-point-shooting threat—though such a move would necessitate moving DeMar DeRozan to the 3 or playing them in the backcourt together at times without a true point guard.

Gregg Popovich and R.C. Buford don't make panic moves. But given the Spurs' recent struggles, they are expected to be one of the teams that most closely monitors the Wizards mess to see if it's fixable—or not.

In the end, that's the same question the Wizards are asking themselves…yet again.