NBA Power Rankings: LeBron James and the 15 Greatest Point Forwards of All Time 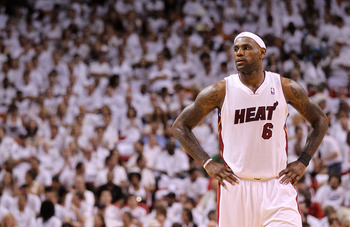 After posting another amazing line in the Miami Heat's Game 4 victory over the Chicago Bulls, LeBron James has once again proven how dangerous an extremely versatile player can be.

However, that's not all, as his repeatedly impressive performances have helped to seal a spot for him as one of the greatest point forwards in NBA history.

But where, exactly, does LeBron rank among the all-time greats?

Well, this slideshow will seek to answer that question, ranking the top 15 point forwards of all time. 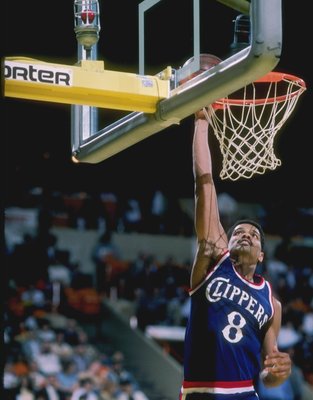 Marques Johnson entered the NBA in 1977, joining the Milwaukee Bucks and head coach Don Nelson—who has become infamous for his nontraditional coaching methods.

And as it turns out, the combination of those two may have very well resulted in the birth of the term "point forward."

In fact, Johnson tells it like this: "It was the early '80s and we had all our point guards hurt with the Bucks. Nellie came up with a way to have me initiate the offense in all our sets. My response was, 'so instead of being the point guard, I'll be the point forward.' Nellie liked the label and has used it ever since."

In the end, Johnson only managed a career average of 3.6 assists per game, but his innovation is what truly earns him a place on this list. 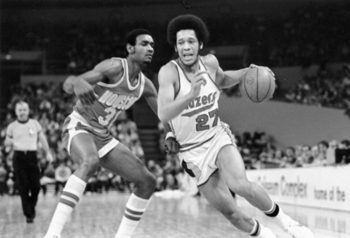 Before Marques Johnson, there was John Johnson.

As a member of the Cleveland Cavaliers, Portland Trail Blazers, Houston Rockets and Seattle Supersonics from 1970-82, the 6'7", 200-pound Johnson was a pioneer of the point forward position.

Johnson served as the primary distributor for a few of his teams, racking up some decent assist totals and even earning a few All-Star berths in the process.

And while he may not have been responsible for coining the term point forward, he certainly would have fit the bill. 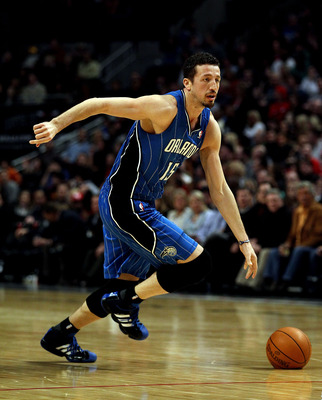 Standing 6'10" and weighing in at 220 pounds, Hedo Turkoglu is one of the purest point forwards in the NBA today.

The Turkish forward has thrived as an essential ball-distributor and playmaker on the Orlando Magic, handling the ball with ease and creating tons of mismatches due to his size.

Moreover, when allowed to play in this role, Turkoglu has put up some solid numbers, with averages of 5.0, 4.9 and 5.1 assists per game during his last three seasons with Orlando.

And while the 32-year-old has seen his scoring totals drop lately, his versatility and skill level should allow him to play for a few more years, and possibly earn a higher place on this list. 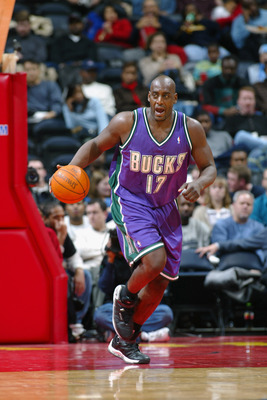 Throughout his 13-year NBA career, Anthony Mason certainly looked the part of a pure interior player.

Moreover, standing 6'7" and weighing about 250 pounds, he became known for his toughness and tenacity on the boards and on defense.

However, Mason possessed the ball-handling and passing skills of a much smaller man, a fact which allowed him to thrive as a point forward.

In fact, after he left the offensively inept New York Knicks of the early 1990s, he immediately turned in a 5.7 assist-per-game campaign for the Charlotte Hornets.

And even though he was aging at that point, Mason was still able to dish out his fair share of assists before his eventual retirement, sealing his place among the best point forwards of all time. 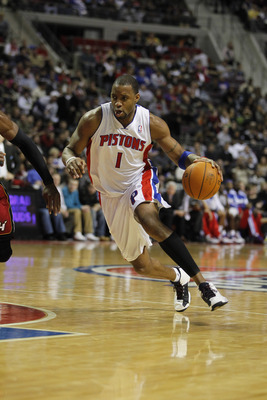 After entering the NBA straight out of high school, Tracy McGrady needed a few years to develop, however, it soon became evident that he was destined to become one of the league's best playmakers.

And while he was largely known for his scoring, the 6'8", 223-pound forward also possessed a fantastic ability to set up his teammates.

In fact, McGrady averaged over five assists per game seven times, with a single-season high of 6.5 APG.

Moreover, in his most recent campaign, he even logged some time actually playing at point guard for the Detroit Pistons.

So in all, McGrady has been able to post a career average of 4.6 assists per game over his 14 seasons in the NBA, earning him a place among the NBA's best point forwards ever. 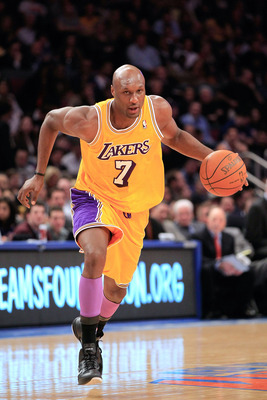 Shortly after debuting in the NBA, Lamar Odom was already putting his point forward skills on display.

However, he hasn't managed to maintain that level of production throughout his career, due to his playing alongside other players who serve as primary ball-handlers, and more recently, due to his limited playing time in a sixth-man role.

Nevertheless, whenever Odom is on the court his playmaking skills are apparent, so as he continues his career he will certainly end up among the top point forwards ever. 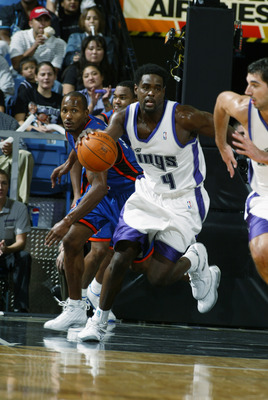 After an enormously successful career in which he was named to five All-Star teams, Chris Webber was certainly one of the more successful NBA players of his era.

What's more, the 6'9", 245-pound power forward was able to thrive as a focal point of his team's offense, setting up his teammates regularly with his solid ball-handling and passing.

As a result, Webber managed to average 4.2 assists per game throughout the entirety of his career, allowing him to go down as one of the best point forwards of all time. 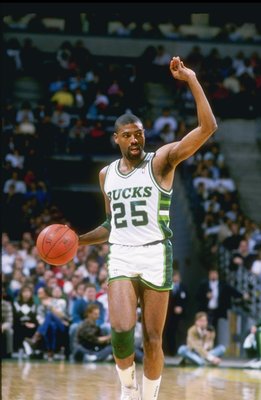 While Don Nelson utilized Marques Johnson as his first, experimental point forward, he really took the position to another level with Paul Pressey.

Pressey actually played alongside Johnson on the Milwaukee Bucks, and Nelson immediately shifted the responsibility of running the offense onto the shoulders of Pressey.

For his part, Pressey thrived as the team's ball-handler, distributor and playmaker, averaging upwards of seven assists per game during a five-year span.

In the end, he finished with a per-game career average of 5.1 assists, making him one of the first highly successful point forwards in NBA history. 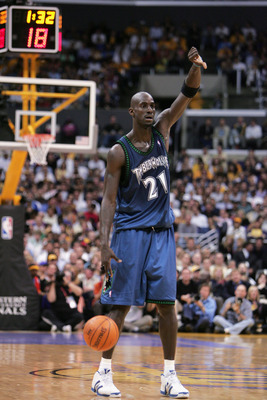 Before joining the Boston Celtics, Kevin Garnett was the do-it-all force powering the Minnesota Timberwolves.

And while his scoring, rebounding and defense got much of the attention, the 6'11", 220-pound forward also proved himself as an outstanding distributor.

As a matter of fact, he logged six consecutive seasons with an average of five or more assists per game, and 10 seasons with four or more.

So despite his increasing age and decreasing amount of time spent as his team's playmaker, KG has still posted a career average of 4.1 assists per contest, making him one of the NBA's all-time great point forwards. 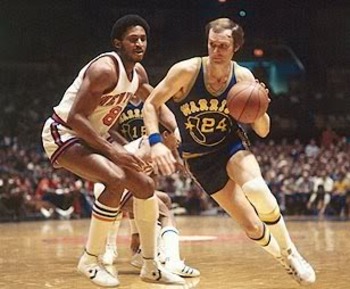 Rick Barry may have been the NBA's first highly effective point forward.

In fact, former NBA Coach of the Year Del Harris once said of Barry, "He would sort it out. He would make the plays. He was really the first guy to be utilized in that role very heavily. But there was no name attached to it."

Moreover, in his 10-year NBA career (Barry also played in the ABA for four seasons), the 6'7", 205-pound forward managed to average a full 5.1 assists per game, including five campaigns with six or more assists per contest.

Therefore, there is no doubt that the eight-time NBA All-Star was one of the best point forwards of all time. 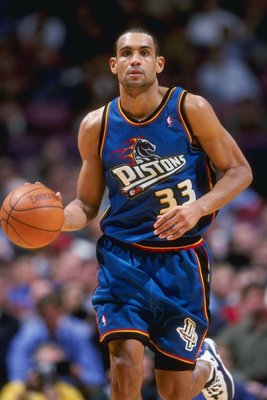 While Grant Hill just finished up his 16th season in the NBA as a solid, if somewhat underwhelming player, it's easy to forget just how dominant he was early in his career.

During his early years with the Detroit Pistons, the 6'8", 225-pound small forward did it all on the court.

And he was a fantastic point forward early on, as he managed to average over 6.25 assists per game throughout his first seven NBA seasons.

So although his career was severely hindered by repeated injuries, Hill has still earned a place among the top point forwards in history. 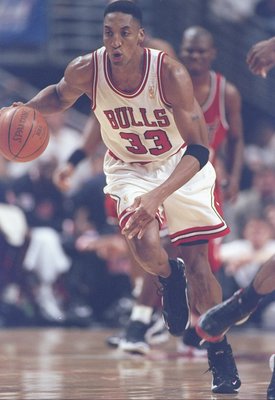 Scottie Pippen may be one of the most underrated players in NBA history—which is at least partially due to his role as a point forward.

Playing alongside Michael Jordan, Pippen did not need to shoulder too much of the scoring load, but instead, he was called upon to defend and run the offense.

And run the offense he did, racking up a 5.2 assist-per-game average over the course of his 17-year NBA career.

So seeing as though the 6'8", 210-pound Pippen helped to lead his team to six NBA titles and was named to seven All-Star teams, he is certainly one of the best point forwards ever to grace the court. 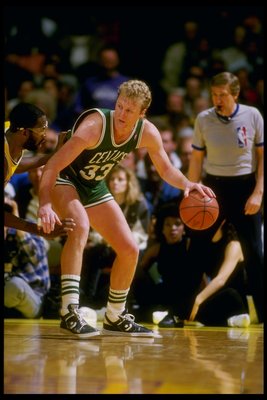 Larry Bird was one of the greatest players of all time.

However, much of the focus often goes to Bird's scoring abilities, leaving his playmaking to be overlooked.

Yet that is a big mistake, as the 6'9", 220-pound forward managed to dish out an amazing 6.3 assists per game throughout his 13-year career.

Moreover, he only averaged below five assists per game twice—once in his rookie season (4.5) and again in his injury-plagued 1988-89 campaign (4.8).

Consequently, he is within the NBA's top 35 all-time in total assists, a 12-time All-Star, a three-time MVP, a three-time NBA champion and definitely one of the best point forwards in NBA history. 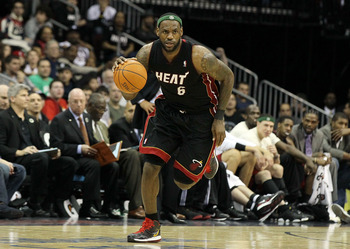 Sure, LeBron James is only in his eighth NBA season—but with what he has accomplished so far, he has certainly earned a spot next to the best point forwards in the NBA.

Currently, he is maintaining a career average of 7.0 assists per game, and he has posted a single-season average as high as 8.6.

Moreover, LeBron is cognizant of his role as an all-time great point forward, as he has stated, "I play it on the court every night, being the point forward. I bring the ball up a lot for this team. I initiate a lot of the offense. At the same time, I can create for myself also. Just like Pippen did. People look at Grant Hill in his heyday when he did a lot of those things too."

So with the talent, skills, track record and confidence, the two-time MVP James is clearly one of the best point forwards ever. 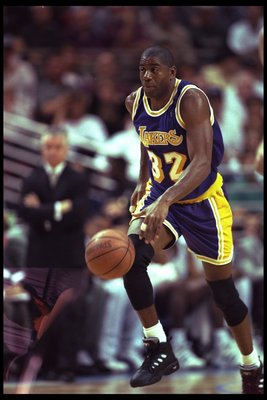 Yes, Magic Johnson did play point guard, not forward, for the majority of his career.

However, that wasn't always the case, seeing as though Norm Nixon was the Los Angeles Lakers' point guard during Magic's first four seasons.

And also, even when he was the point guard, Magic still occasionally shifted to play other positions.

After all, who can forget his filling in for Kareem Abdul-Jabbar at center during the 1980 NBA Finals.

But perhaps most important is the fact that he was, simply, a point guard in a forward's body, which should in and of itself make him a point forward.

So after qualifying him for contention as a point forward, little argument is need to show that he was the best.

With an average of 11.2 assists per game during his 13-year career, Magic leads the NBA by a long shot.

And when one factors in that he stands 6'8", weighed 220 pounds and was a 12-time All-Star, five-time NBA champion and three-time MVP, it's clear that Magic was the best point forward ever.