Rasheed Wallace didn't have a tough time choosing a jersey number when he signed with the Boston Celtics this past summer. He picked the same number he has worn for most of his career: 30.

That number, though, likely would not have been available to him if a man by the name of Len Bias hadn't passed away almost 25 years ago.

You've heard the story many times. Bias, the former University of Maryland star, died from a cocaine overdose less than 48 hours after being drafted second overall by the Celtics in the 1986 NBA Draft.

He was expected to insert youth and athleticism to an aging Celtics lineup and help the "Big Three" of Larry Bird, Kevin McHale, and Robert Parish win a few more titles in the 1980s.

Bias could have prolonged the careers of those Hall-of-Famers and then taken over as "The Man" and carried the C's to additional championships in the 1990s.

Unfortunately, the Celtics, who had won it all in 1986 over the Los Angeles Lakers, failed to claim another title in the '80s and Bird and McHale were forced into retirement in the early '90s due to injury.

Most of the '90s were absolutely miserable for the Celtics as they became a perennial lottery team once the Big Three left town and went on to acquire a bunch of average talent.

But the loss of Bias and the breaking down of Bird and McHale weren't the only reasons for the team's demise. Celtics All-Star guard Reggie Lewis died of cardiac arrest in 1993 at the young age of 27.

In case you didn't follow the NBA much in the 90s, Lewis was one of the most dangerous scorers in the league back then. He led the Celtics with back-to-back 20 ppg seasons and averaged 28 per game during the '92 playoffs.

Bias and Lewis could have very well formed a dynamic duo as two extremely gifted scorers who could drop 30 a piece on any given night.

The Celtics vs. Bulls matchup could have turned into an epic rivalry with the two teams fighting and clawing in the Eastern Conference Finals each year.

Just imagine the matchups—Jordan vs. Bias and Scottie Pippen vs. Lewis. Many people thought that Bias would have been as good or even better than Jordan and we know how good Pippen and Lewis were.

Who knows if the Celtics would have won stolen any titles from the Bulls, but they just might have beaten Hakeem Olajuwon's Houston Rockets in both '94 and '95 while Jordan was playing baseball.

But of course, the Celtics might have still been an awful team in the 90s.

Bias could have turned out to be a bust or just an average player and Lewis might have gotten injured and went from an All-Star to a role player.

We'll never know what would have happened if those two talented young men had lived, we'll just always have to wonder "what if." 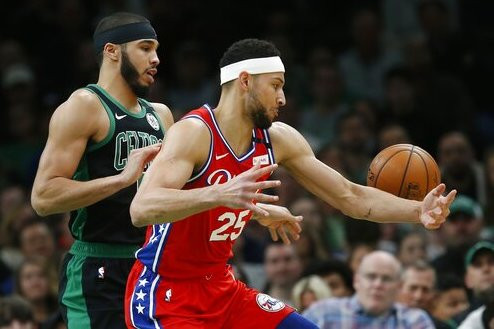