It has become all too easy to poke fun at the Los Angeles Lakers.

Los Angeles has now missed the playoffs more times in the past six years (six) than in the other 65 total seasons of the franchise's existence (five).

Perhaps the wildest part? We could see the Lakers in the Finals next year.

While this will disappoint trade-machine enthusiasts, no, the Lakers should not move James.

At age 34, he still put up the highest per-36-minute scoring average (28.0 points) and rebound mark (8.6) of his career while also posting the second-highest assist average (8.4) in his 16 seasons.

After a run of 13 straight postseasons and eight consecutive Finals, James finally has a chance to rest.

Coming into the 2018-19 season, James played in all 82 regular-season games, with 22 extra tacked on in the playoffs. In those 104 contests, he logged a league-high 3,948 minutes of court time. This was following a summer where he received just 108 days off from the end of the 2018 Finals to the opening day of Lakers training camp. 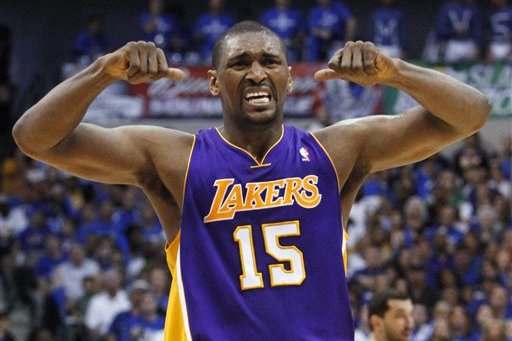 Now, James will have 178 days off between his last regular-season contest March 29 and the likely start of Lakers camp Sept. 24. That's almost an extra two-and-a-half months.

He's also coming off a season where he logged the fewest number of total games (55) and minutes (1,937) since his senior year of high school in 2002-03. That's nearly half the number of games and fewer than half the total minutes of the season before.

The rest of the NBA shouldn't want to find out.

The failed Davis trade essentially ruined the season for both the Lakers and New Orleans Pelicans, but with Executive Vice President of Basketball Operations David Griffin now running the Pelicans, trade talks should be back on. Griffin was the general manager for three of the four seasons James returned to Cleveland, assembling the championship team of 2015-16.

Griffin also carries plenty of experience with James and Davis' agent, Rich Paul, who also represents Tristan Thompson and JR Smith. Griffin and Paul previously agreed on nearly $250 million worth of new contracts for James, Thompson and Smith while all were in Paul's hometown of Cleveland.

While Griffin could try to build around Davis for one more year, maximizing his value in a trade before free agency in 2020 is the smart play.

If the Pelicans don't want to part with All-Star point guard Jrue Holiday, they could reroute Lonzo Ball as part of a deal.

Here's what a potential updated trade for Davis could look like:

Pairing Davis and James should at least mean a guaranteed playoff spot, especially if the Lakers keep Josh Hart and Mo Wagner as rotation pieces or future trade bait.

Still, two stars won't be enough to reach the Finals in today's NBA. The Lakers will have to rely on their own cap space and some free-agent scenarios to play out first.

This is why every signee after James last summer only got a one-year deal.

With the roster as it currently stands, the Lakers will have just $62.2 million in committed salary for next season, leaving about $46.8 million in cap space. That is more than enough to sign a max free agent. While James is normally on his social media hiatus this time of year, he's currently free to recruit DM as many upcoming free agents as he pleases.

So, who to target?

It'd be surprising to see either Kevin Durant or Kawhi Leonard join the Lakers, although general manager Rob Pelinka should definitely still make some calls. From there, four names stand out, in this order: Kyrie Irving, Kemba Walker, Klay Thompson and Jimmy Butler.

Irving is the most attractive option. He's the youngest of the bunch at 27 and the only one James has already won a title with. The divorce between Irving and James is well-documented and led to the breakup of the Big Three in Cleveland, but all wounds eventually heal. As ESPN's Brian Windhorst stated on The Hoop Collective podcast, don't rule out Irving's arrival just yet:

"I think the possibility of Kyrie and LeBron reuniting—that door, which was deadbolted, has been un-deadbolted and has now been cracked open … It might even be opening more by the day. And I say that just because I think it's on Kyrie's radar; it's on Kyrie's board. He has had discussions with people about playing for the Lakers."

This would have the potential to be better than the 2014 to 2018 Cavaliers, with Irving now in his prime and Davis substituted for Kevin Love.

If Irving is still unsure about reuniting with James, Walker would be a nice consolation.

At 29, he is two years older than Irving but nearly as talented. An All-Star for the last three years, he put up a career-high 25.6 points per game for the Charlotte Hornets this season while receiving little help. There's no good reason to stay with a team that couldn't even crack the Eastern Conference playoffs, and Walker should be fine giving up shots if it means a serious run at a title alongside James and Davis.

Thompson and Butler should be Plans C and D. While it would be hard to imagine Thompson leaving Golden State, the prospect of endless pinpoint passes delivered by James and the opportunity for his father (radio broadcaster and former Laker Mychal Thompson) to call his games may at least get the Lakers a meeting. Butler (18.7 points, 5.3 rebounds, 4.0 assists) would work nicely as a two-way, playoff-tested veteran star as well.

There's also some natural evolution in the Western Conference that could boost the Lakers' chances. If Durant, Thompson or both leave Golden State, the West becomes wide-open. The Houston Rockets are capped out and will owe 34-year-old Chris Paul $38.5 million next season. Even the Portland Trail Blazers could see valuable rotation members Al-Farouq Aminu, Rodney Hood and Enes Kanter walk in free agency.

A core of a rested James, Davis and Irving/Walker/Thompson/Butler could be the favorites to come out of the West with the right pieces around them. And enter in new head coach Frank Vogel, who is the most experienced and accomplished NBA coach who has ever been hired to lead James.

As dark as the past few years have been for the Lakers, the next few could easily become a whole lot brighter.

Greg Swartz covers the NBA for Bleacher Report. Follow him on Twitter. All stats via Basketball Reference or NBA.com unless otherwise noted.