It's time for the Indiana Pacers to re-evaluate their relationship with two-time All-Star Victor Oladipo, who is entering the final year on his contract at $21 million. Even if he wanted to commit to a long-term stay in Indiana, an extension is unlikely before free agency in 2021.

That's because the most the Pacers can offer is a 20 percent raise starting at $25.2 million, well short of a maximum salary (currently $32.7 million and likely to be higher in 2021).

"I bet they trade him," one former Eastern Conference executive said, looking ahead to the upcoming offseason.

Oladipo may have his eyes on a potential payday via free agency. He may have every intention of re-signing with Indiana, but the team runs the risk of losing him for nothing once his contract runs out.

The 28-year-old guard hasn't been the same since the January 2019 quadriceps tear that knocked him out for a full year. The team has been busy since, adding Malcolm Brogdon on a four-year, $85 million contract (via sign-and-trade with the Milwaukee Bucks). The Pacers also stole TJ Warren in a trade with the Phoenix Suns and locked in Domantas Sabonis on a four-year, $74.9 million extension that begins with the 2020-21 season.

Given more time, Oladipo may get back to being the player who averaged 23.1 points per game while leading the league with 2.4 steals during the 2017-18 season. But can Indiana even afford to keep him?

The Pacers are a small-market team with an owner (Herb Simon) who won't accept tanking and isn't willing to spend into the luxury tax. If Oladipo commands a maximum salary, Indiana could have nearly $128 million invested in nine players, with about $116 million of that going to just Myles Turner, Jeremy Lamb, Sabonis, Brogdon, Warren and Oladipo. 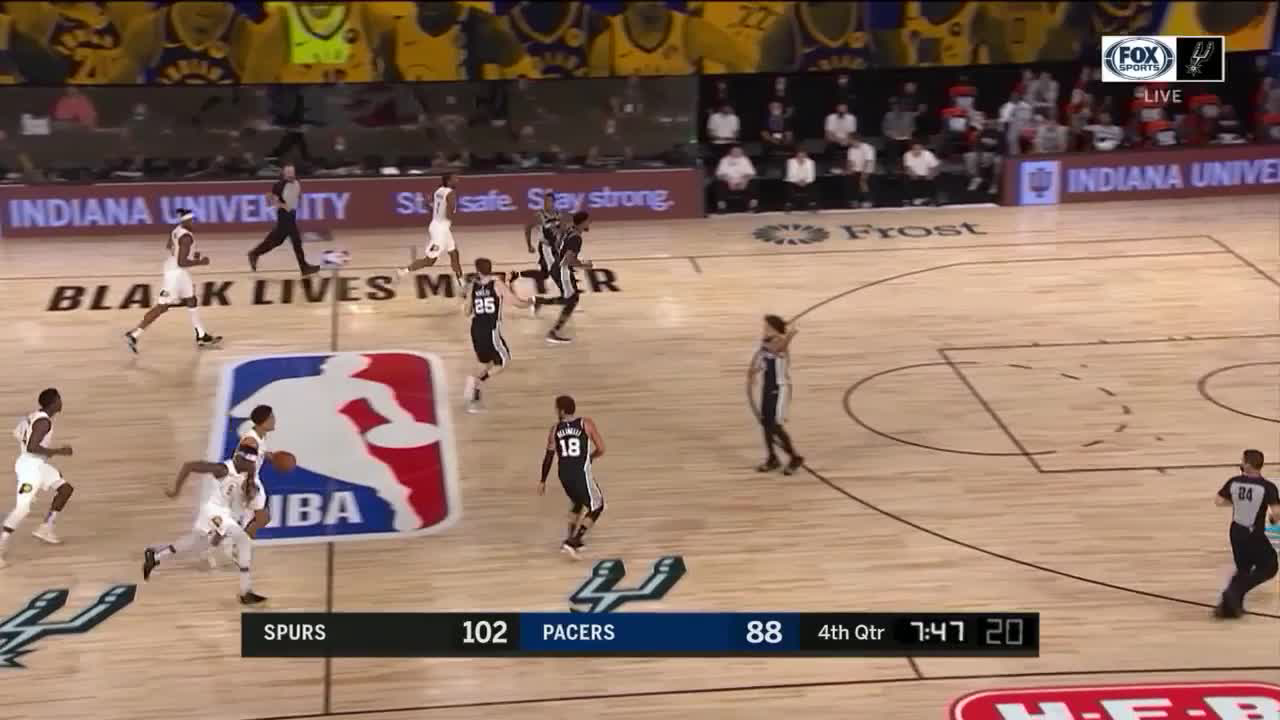 The NBA's uncertain economy is a complicating factor as the league tries to work through the COVID-19 pandemic. Thus far, the Orlando bubble has been a resounding success, but if next year is played without fans in attendance, the league's basketball-related income will take a significant hit.

If the cap can climb to $115 million with a luxury-tax threshold of about $139 million for the 2021 season, the Pacers might pay Oladipo. If so, they could be limited to signing minimum-salaried players to avoid the tax. And If the cap stays flat at $109.1 million (with a $132.6 million tax line) for the next couple of years, the Pacers might need to find a way to reduce payroll outright.

The answer could be trading a different player to keep Oladipo.

Several executives around the league still believe the Pacers eventually break up their big-man duo of Sabonis and Turner. But at least through the February trade deadline, Indiana had no interest in doing so. Looking ahead to 2021-22, Sabonis and Turner will earn a combined $36.5 million. That's two productive contributors, including one All-Star, at the same price as a single max player.

It's not the Pacers' way to trade high-value/relatively low-dollar contracts to overpay a player who still has yet to prove he's the same after a significant injury. Other teams may be better suited to take that financial risk.

"I don't think I would touch him," a Western Conference executive said. "He doesn't look healthy."

That's a fine point. Oladipo averaged just 14.5 points per game this season but also 22.3 over his three final playoff performances against Miami. Some teams will look at his diminished performance and move on; others will recognize that he initially intended to sit out the bubble entirely to continue his rehab. Faced with losing his salary by not playing, Oladipo chose to use the bubble as an opportunity to get his game back.

Several teams have shown they're willing to make that kind of leap, investing in a player dealing with an injury. The Los Angeles Clippers traded for Paul George, who they knew wouldn't start the season on time after two offseason shoulder surgeries. Kevin Durant got a massive deal from the Brooklyn Nets coming off an Achilles tear, skipping the 2019-20 season entirely.

The Pacers are not a top-tier free-agent destination, and with their financial restrictions, they need to be both proactive and conservative. Oladipo already has a significant say on where he goes next. Like Kawhi Leonard and Anthony Davis before him, he's at that sweet spot in his contract where he can try to direct Indiana to send him to his preferred destination.

"Oladipo can control [a trade] if he says he won't re-sign anywhere else," the former executive said.

Still, the Pelicans fared well in the Davis trade with the Los Angeles Lakers. Indiana has a window to get a profitable deal, but the longer the Pacers wait, the more significant the risk.

"You don't give that away [a player of Oladipo's pedigree], especially at a place like Indy," a former Western Conference executive said."

One contender could be the Heat, believed to be targeting Giannis Antetokounmpo of the Bucks with cap room in 2021. Milwaukee's fate will be evident over the coming weeks. A title could lead Antetokounmpo to sign a supermax extension; an early playoff exit could lead to an eventual trade or departure via free agency.

The Heat may not make a run at Oladipo until they know they're out of the running for Antetokounmpo. If they get that intelligence early enough, they could make a pitch with young pieces such as Tyler Herro, Duncan Robinson and Kendrick Nunn (with either Kelly Olynyk, provided he opts in to his final year at $12.2 million, or Andre Iguodala). Miami isn't likely to part with All-Star Bam Adebayo, so the club may struggle to generate enough assets for Oladipo.

While Oladipo might relish an opportunity with the Heat, Miami is also woefully deficient on tradable future draft picks. The team can only send its 20th pick in the upcoming draft, but not until after it's selected. The Heat would need to know both Antetokounmpo and Oladipo's plans in time to make the selection on behalf of the Pacers.

Also, Herro and Robinson have been delivering for the Heat in the playoffs. Miami may find it's better off with its home-grown talent.

The Atlanta Hawks may be able to make a more realistic pitch, starting with the No. 6 pick and prospects such as De'Andre Hunter, Cam Reddish and/or Kevin Huerter (several players still on their cost-controlled rookie-scale contracts).

If that's appealing to Indiana, the Hawks will face a similar challenge with Oladipo in that he can't extend at a max salary. But because Atlanta projects to be one of the few teams with significant cap room this summer, the Hawks would have the means to renegotiate Oladipo's contract after a trade to the 2020-21 maximum.

Assuming the NBA's salary cap stays flat at $109.1 million, Oladipo would be eligible for an immediate raise of $11.7 million to $32.7 million. The Hawks could simultaneously extend him for two additional seasons at roughly $70.4 million through the 2022-23 season.

Few teams have assets that might interest the Pacers and the ability to protect the return on that investment via renegotiation. The Detroit Pistons and Charlotte Hornets will be under the cap this season, but both teams are still rebuilding. And while the Hawks had a miserable 20-47 record, they do have one of the NBA's brightest young stars in Trae Young.

Even after an Oladipo trade, the Hawks could have nearly $20 million to spend on more talent, depending on how many players are needed to acquire Oladipo.

The New York Knicks are also searching for star power. In addition to their No. 8 pick, they can offer two first-rounders from the Dallas Mavericks (2021 and 2023), along with young players such as Frank Ntilikina, Dennis Smith Jr. and/or Kevin Knox.

The Pacers have solid players at point guard with Aaron Holiday, TJ McConnell and Brogdon. Knox still has to prove himself. The Mavericks' picks may not have as much value given Luka Doncic's explosion in Dallas. Yet, New York could have the cap room to renegotiate with Oladipo and may have a greater willingness to give up on its assets to get a star.

If Oladipo hits the trade block, look for other teams like the Lakers and Nets to pursue him, even without a long-term commitment.

With their 2019-20 campaign complete, the Pacers are at a crossroads with Oladipo. Unless he makes it clear he's fully committed to staying long term and the team is willing to cut salaries elsewhere, a trade seems inevitable.

Even then, Indiana doesn't have the cap room to negotiate his contract and would be beholden to his word. If Oladipo changed his mind, the Pacers would lose him to free agency without recompense.

That's too big a risk for a smaller market team unlikely to go into the luxury tax.