Since Earvin "Magic" Johnson's abrupt resignation as president of basketball operations for the Los Angeles Lakers last month, much has been made about the dysfunction in and around the organization.

Those perceptions were exasperated by Johnson's bombshell interview on ESPN's First Take Monday morning, where he took shots at Rob Pelinka and outlined his "betrayal" and explained why he chose to leave his position of two years without giving a warning to team owner Jeanie Buss or Lakers' superstar LeBron James.

The interview itself was explosive, but the fact that it happened on the day that L.A. was to introduce its new head coach, Frank Vogel, was like lobbing grenades at a team that was already trying to sift through the rubble left by the detonative force of Johnson's departure.

Now, as the Lakers look to the future and try to rebuild this offseason, they'll have to focus on more than just enticing big name free agents, developing their young core, making the correct roster improvements and choosing the right player with their No. 4 pick in next month's draft.

They'll also have to find ways to address their apparent leadership void and repair their image as a storied franchise and destination that players covet and regain their footing as a perennial contender for an NBA championship.

Here's the latest buzz on how the Lakers can put a positive spotlight back on hoops in Hollywood. 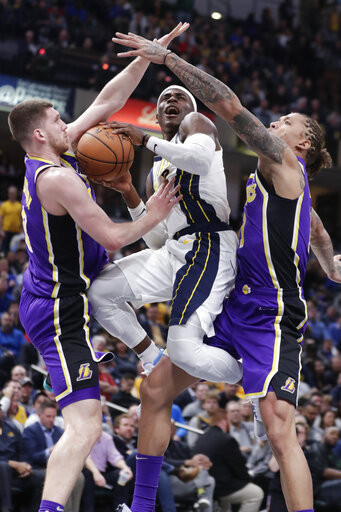 From Magic's scathing tell-all to Pelinka's denials and the Lakers' botched coaching search, the headlines and narratives about the team have not been kind.

And James has taken notice.

According to The Athletic's Sam Amick, the four-time MVP has "expressed concern that the combination of Magic's messy exit and all the negative Lakers headlines threatened to sabotage their summer."

L.A.'s superstar has reason to worry.

There are some really big names on the free agency market this summer and the battle to sign them will be intense.

Kevin Durant, Kawhi Leonard, Kyrie Irving and Klay Thompson will all be available and James knows that it's all up to him, now that Magic and his charisma are gone, to recruit at least one of them to the Lakers.

It was already going to be a tall order considering their dearth of talent, youth and recent history of missing the playoffs.

But now, with the newly revealed chinks in the organization's armor, it must feel like mission impossible.

And L.A.'s leadership hasn't helped. Pelinka didn't field questions after the introductory press conference and the normally visible team owner was nowhere to be found.

It's a bad look for the Lakers, and according to ESPN's Ramona Shelburne, it's likely that the front office will continue to remain mum.

"The Lakers' thinking, when pressed, is something along the lines of: The only thing that will change hearts and minds is winning basketball again, so just take the criticism until that happens. Speak through actions, not words," Shelburne wrote.

"The problem with that strategy is the Lakers' actions continue to be self-destructive, and the only definitive statements on the record are from Johnson."

Still, the pull of L.A. and the opportunity to be the catalyst that turns around the franchise's fortunes is a plus and James is still considered the best player in the world and players want to play with him because he's a willing passer, great leader and a proven winner.

James' presence at the Vogel press conference also presented the right optics. He didn't address the media, but the fact that he was there was enough to add a layer of hope to the proclamation from the new head coach that there was a "positive vibe" happening with the team.

"We need to build togetherness with our organization, and I don't just mean with the 15 guys or 17 guys that are going to be in uniform or in that locker room," Vogel said at the presser via ESPN's Ohm Youngmisuk and Dave McMenamin. "I'm talking about organizational togetherness. Starting with ownership and the front office to the coaching staff, the players, the trainers, the business side -- we are all going to be pulling in the same direction.

"This is something I've always preached as a head coach because you can accomplish amazing things if everybody is together. When that happens, with the way we do things from day to day, that stuff translates to the court and how we play."

Vogel also assured the media that he and James had encouraging talks since he took the reins.

"It was very positive," he said. "There's an excitement about what we can be and what we can accomplish, and I'm looking forward to getting started with this."

Pelinka, on the other hand, upped the ante on the team's outlook.

"I think if people take a look at where this franchise is right now, again we have a great coach, we have a high draft pick. We have a great young core, maybe one of the best in the league. We have a superstar on our team, and an open slot," Pelinka said via ESPN's McMenamin.

"So I think people can look at this as an opportunity to win a championship possibly next year."

With the Laker's current state of disarray, a title seems far-fetched, but James has a better than average chance of convincing at least one elite player to come and join him.

Increasingly, the odds are that it might be Irving.

According to ESPN's Brian Windhorst, the door is no longer closed on that possibility and that Irving is "more open" to reuniting with James in L.A.

James will have plenty of competition from the New York Knicks and nearby Los Angeles Clippers in the quest to land another superstar to ride shotgun on the road back to contention, but he'll more than likely find a way to make it happen.

Lonzo Ball on the Move?

Magic made note of the fact that he still believes Ball can be a great point guard in the NBA during his verbal takedown of the Lakers.

That prediction might ring true, now that Jason Kidd has joined on the staff as an assistant coach. With Kidd's pedigree as a Hall of Fame point guard, it stands to reason that Ball, with Kidd's tutelage, could have a breakout year.

But L.A. needs to level up if they want to compete in the ultra-competitive Western Conference, so no bets are off when it comes to roster improvements.

According to The Chicago Tribune's K.C. Johnson, the Chicago Bulls have eyes for the former No. 2 overall pick.

"The two most logical targets are Ball and the Grizzlies' Mike Conley Jr.," Johnson wrote. "According to multiple league executives, Dunn's trade value is low to nonexistent. So a direct trade with the Lakers centered on Dunn and the No. 7 pick doesn't seem feasible. However, the Bulls could be in position to facilitate a three-team deal in which the Lakers acquire [Anthony] Davis from the Pelicans.

"Ball intrigues the Bulls as a pass-first, defensive-minded point guard with positional size who can best maximize the talents of Lauri Markkanen, Zach LaVine and Wendell Carter Jr."

The Lakers were willing to mortgage their young core in a trade for Davis last season with Magic at the helm, but Buss was reportedly upset that he was willing to deal all or most of them in return.

That could mean that L.A. will hold onto Ball moving forward because of his potential and how he's grownn closer to James and has been getting guidance from him.

"From what I've heard, ever since this happened with Lonzo and firing of Alan Foster and the destruction or whatever is going to be left of Big Baller Brand," Windhorst said on his The Hoop Collective podcast. "I have heard that LeBron has really reached out to Lonzo and they've gotten much closer throughout this. He's really tried to help him through this."

That also seems to be the case from James' vantage point.

"I love the fact that he's taking control of his [stuff]," James told Tania Ganguli of The LA Times. "I mean, he's, that's what's really, really dope to me. Once I saw that story I just seen a kid turning into a man. ‘This is my career and I'm taking this. I done had enough with — whatever. I done had enough. Whatever. If I'm not going to be successful, I'm not going to be successful on my terms.' I saw a lot of that. We'll see."

Only time will tell if Ball stays with the Lakers, but one thing's for sure, they will do everything in their power to make the kind of moves this summer that puts them back on the winning track.