It was June 28, 2005 when Andrew Bynum first became a Los Angeles Laker. At 17 years and 244 days of age, he is the youngest player ever drafted. He decided to forgo college and entered the draft straight out of high school, hoping to be a high pick.

It was the Lakers who took a chance on him, selecting the then-lanky 7’0" New Jersey native with the 10th overall pick.

Some criticized the Lakers, claiming they reached. Doubters said Bynum wasn't a dominant player and never would be. They said Bynum would take too long to develop and the end result wouldn't be worth it.

Nonetheless, the Lakers ignored the non-believers, knowing it would be challenging to help him fulfill his potential. Bynum also knew it would be tough, as he arrived less than a year after L.A. traded away Shaquille O’Neal.

Whether he liked it or not, Bynum was the successor to the man who led the Lakers to three championships. He was the replacement for the man who was Kobe’s partner in arguably the best duo in NBA history. He was the heir apparent to the most dominant center the NBA had seen in over a decade.

Bynum knew he’d have to play his best, and that expectations would be high. He knew he had huge shoes to fill (size 23 to be precise). He knew it would not be an easy journey, and he wouldn't have had it any other way.

He started off slow. He was inexperienced, young, thin and certainly not dominant, but he showed flashes of brilliance, enticing Lakers fans and coaches alike with the promise of becoming a star center. His second season marked a clear improvement, as did his third, but it was during his third season that he suffered a devastating knee injury that would forever alter the course of Lakers history.

The team acquired Pau Gasol, who immediately became the Lakers' second-best player and Kobe's partner in a three-year run to the NBA Finals, winning two championships. After acquiring Pau Gasol, Bynum’s progress seemingly halted. He suffered another injury, then another and another. Pretty soon, people started to doubt him, believing him to be an average, injury-prone center.

Bynum was being forgotten, being nothing more than the fourth option behind Kobe Bryant, Pau Gasol and Lamar Odom. It seemed people had accepted that he would simply not become the great center so many people thought he could be. But Bynum would have none of it. 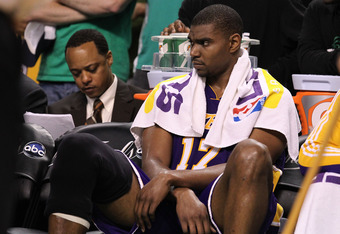 During those tumultuous years, Bynum not only dealt with injuries, but also with persistent and unyielding trade rumors. From Jason Kidd to Devin Harris to Chris Bosh to Dwight Howard, Bynum was continually amidst trade talk. But even with all the distractions, he remained unfazed.

While the media took turns guessing where he’d end up, Bynum diligently completed his knee rehab. While Kobe, Gasol and Odom soaked up the L.A. spotlight, Bynum built upper-body strength, transforming from a tall and thin kid to a 280-pound man.

While Lamar Odom got married on reality TV, Bynum worked on his footwork. At a time where many seemed to give up on him, he never gave up on himself.

It is now April 2012—almost seven long, arduous years after he first became a Laker—and Andrew Bynum has finally become the dominant center the Lakers envisioned when they drafted him. For all the criticism general manager Mitch Kupchak and executive Jim Buss received for being unwilling to trade him, it is time to humbly apologize and applaud them for their patience and resilience.

When everyone wanted Bynum gone, they stayed true to themselves and followed their plan. They didn't trade him, knowing few big men could do what Bynum could. And in the end, they were right. It took a couple of years for everyone to notice, but it happened.

They made the right choice in not trading Andrew Bynum.

From analysts to teammates to competitors, everyone agrees that Bynum has become a force to be reckoned with. He has, however, received criticism. He’s been called immature and a distraction, as evidenced by his flagrant fouls and bad decisions displayed on the court. Nonetheless, at the end of the day, Bynum is still a major contributor and far from being a hindrance to the team.

Bynum is a key reason why the Lakers have won so many games without Kobe Bryant. He is the reason the Lakers can remain competitive against teams like the Orlando Magic, Chicago Bulls, Los Angeles Clippers and San Antonio Spurs. There are only a few teams that are well equipped to stop a man of his size. With his skill set, and he takes full advantage of this.

For all the criticism he receives, he has not let it affect the way he plays on the court. After being benched for an errant three-point shot, Andrew Bynum came back the next game and scored 26 points. After injuring his ankle and sitting out a game, he came back and scored 36 points.

Bynum knows that the media will sometimes blow things out of proportion. His only concern is to improve as a player and help the Los Angeles Lakers win games. That is the right attitude for a young center heading into the playoffs.

Andrew Bynum is a polarizing figure. He has finally become a great center and consequently calmed down Dwight Howard rumors; in fact, there are people who argue Bynum is a better center than Dwight Howard, citing his superior offensive skills and the length he provides.

In the same way that there has been a lot of criticism, there has been a lot of praise for him. From local newspapers to international sports networks, Andrew Bynum is one of the most heard names right now when talking about basketball. And out of all praise he has received, none has been as powerful as the one given by the man he replaced, the living legend whose shoes he filled: Shaquille O’Neal.

It was during a live broadcast that Shaq was asked who the best big man in the NBA was, and without hesitation, he replied, “Andrew Bynum.”

And with good reason, too. As of today, he's playing the best basketball he’s ever played. He has, without a doubt, become the Lakers’ second-best player, and he will  be the key building block for the team in the future.

After seven long years, Andrew Bynum has arrived. And at 24, he's just getting started.

Nets star will see a specialist after reaggravating his shoulder injury

Veteran guard plans to sign with Clippers after clearing waivers