Peoples Timeline: A Look Back on The Rock's Historical Return to the WWE 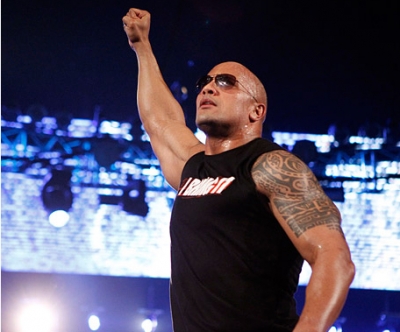 Over a month ago, The Rock made his return to the WWE after seven long years of being absent from the squared circle.

Little did any of us know that he wasn't back to just say a few lines, host Wrestlemania and leave.

He told us he would be back for good, and would also claim that, he is never, ever, going away.

Back in 1996, when the "blue chipper" known as Rocky Maivia made his debut inside of a WWE ring at Survivor Series, not many of us knew the impact he would have on the wrestling industry.

Fast forward to 2011, Dwayne "The Rock" Johnson is a big Hollywood movie star, as well as a WWE Legend.

A 38 years old, The Rock has at least guaranteed us one more match, at Wrestlemania 28 against WWE Superstar, John Cena.

In The Rock's return, he has taken over the WWE with his electricity and presence, unlike any other past star is capable of doing.

Let's take a look back on the last time we saw The Rock, up until Wrestlemania 27, where he brought down the dome in Atlanta, Georgia. 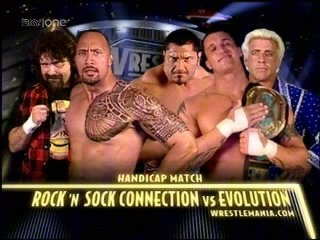 Seven years ago, at Wrestlemania XX, Mick Foley brought in The Rock to reunite the Rock N' Sock Connection and help him conquer the group known as Evolution.

Leading up to Wrestlemania XX, The Rock hosted his own version of "This Is Your Life" for Foley on the March 8, 2004 edition of Raw.

Years back, Mick Foley did the same for The Rock.

The team of Randy Orton, Ric Flair and Batista, representing Evolution, went on to defeat The Rock and Mick Foley at Wrestlemania XX, when Orton pinned Foley after hitting an RKO.

Many believed that this was The Rock's final match ever in the WWE and he would never return to the squared circle again.

A few sporadic appearances following Wrestlemania XX in 2004, in which The Rock appeared live in a WWE ring include, coming to Eugene's aid, saving Mick Foley from La Resistance and a Diva's pie eating contest.

It wasn't until 2007 when the WWE saw The Rock again. However, it would be via-satellite, on a pre-recorded segment.

On March 12, 2007, on an episode of Raw, The Rock made an appearance on the titantron. He predicted that Bobby Lashley would defeat Umaga at Wrestlemania 23 in Vince McMahon and Donald Trump's "Battle of the Billionaires" match.

The night before Wrestlemania 24, emanating from sunny Orlando, Florida, The Rock inducted his father (Rocky Miavia) and his grandfather (High Chief Peter Miavia) into the WWE Hall of Fame.

On this night, the WWE fans in attendance at Orlando's Amway Arena got a special treat, this was the first time The Rock appeared live in-person on WWE television since 2004.

During the induction speech, he made a famous remark towards John Cena, and how poor his movie The Marine was. However, The Rock did say his movie, Doom, wasn't any better.

In celebration of the 10th year of WWE Smackdown, a show that The Rock is credited for because of the word 'Smackdown', he made a special appearance.

However, once again, it was on a pre-recorded segment via-satellite, which of course, took away from the overall feel of the moment.

The Rock talked about how he was there from when it all begin 10 years prior.

I remember watching this, sitting at home, trying to get excited about the moment, but the fact that he wasn't actually there, didn't do anything for me.

I wasn't mad at the situation because The Rock doesn't owe us anything in my opinion, but it would of made the show more special if he was present.

However, it was in this segment, The Rock mentioned guest hosting Monday Night Raw, which reportedly fell through due to The Rock's travel plans in 2010.

After watching this, it was the first night I ever believed we would see The Rock again, and possibly in a match, when he was interviewed by David Letterman on January 19, 2010.

He talked about how special it was to hear all of the screaming fans inside of an arena.

The Rock talked about how he would most likely return in the capacity of hosting, and not necessarily for a match, but he never said never.

He left that door open.

The most special part about this interview is how The Rock cleared up being called Dwayne Johnson versus The Rock, where he said, "Well, I'll always be The Rock."

It meant a lot for this fan, to hear him say those words and set the record straight.

On Valentines Day, 2011, after seven long years, The Rock made his live return to a place he called home—the WWE.

On the previous episode of Monday Night Raw, Vince McMahon announced that Wrestlemania XXVII would be better than the previous and would be getting a special guest host.

He said this host would be someone who set a banner in the WWE, and I immediately thought of The Rock and posted a few articles along the way, including a preview of Raw that night, WWE Monday Night Raw Preview: Has The Rock Finally Come Back?

When it actually happened, I was still in shock.  I couldn't believe it was actually him, live, and in-person.

The Rock then went right after John Cena, making the night even more memorable.  Cena made comments towards The Rock in a 2008 interview with The Sun, taking several shots at The Rock.

Rock responded to Cena and said he would be seeing him at Wrestlemania.

However, on this night, finally, The Rock has returned.  Finally.

The entrance of The Rock still gives me chills when I re-watch it for the 5,658th time.  With every light that went off, it sent shockwaves and electricity through my body.

The week before Wrestlemania in Atlanta, Georgia, where The Rock would be hosting the biggest event of the year, he made one last stop on Monday Night Raw in Chicago, his first live appearance since his return on the February 14, 2011 edition of Raw.

After weeks of Cena and The Rock trading insults back and forth, in which The Rock used pre-recorded segments to get his message across, he finally made another live appearance.

During this appearance, he called out John Cena, only for them both to be interrupted by WWE Champion, The Miz and Alex Riley.

While John Cena was on the outside of the ring, The Rock was attacked by The Miz and Riley.  When Rock took control, Miz headed for higher ground while Riley received a Rock Bottom for his troubles.

However, Cena snuck up on The Rock and performed his finisher on him, the Attitude Adjustment. 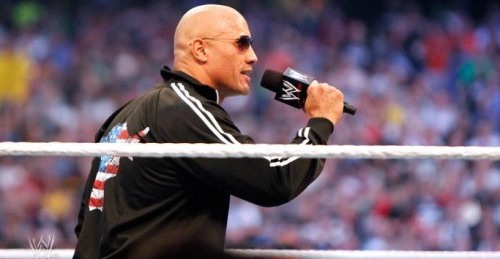 The Rock made his return to Wrestlemania, as he hosted Wrestlemania 27 from Atlanta, Georgia.

We knew it was going to get physical between The Rock, Miz and John Cena, we just didn't know how and when.

The Rock came out to the ring at the end of the show, just as Cena and Miz were involved in a double-countout draw.

However, The Rock restarted the match, with no countouts, no disqualifications.

From then, The Rock responded to Cena's actions the week before, sneaking up behind him, and planting him with a Rock Bottom, helping Miz earn the pinfall.

The Miz also received a Rock Bottom for his troubles as the show closed.

The night after Wrestlemania in the Philips Arena in Atlanta, John Cena called out The Rock.

The Rock responded to Cena about his actions at Wrestlemania, "What did you think was going to happen? You poke a shark in the eye, you get swallowed whole."

"The Rock respects you, but it doesn't change the fact, that flat out, The Rock just doesn't like you."

Cena responded, "hear it, feel it, see it, there are people standing in the ceiling, not because they want us to talk, because they want a match.  Not just a match, these people know what match, a match where generations collide.  The match they want is John Cena versus The Rock.  It's obvious, this is what we should do.  So, do you want to talk about it, or do you want to bring it?"

Rock answered, "John Cena, you have no idea what you just asked for."

"You asked The Rock to bring it, you bet your candy !#$ The Rock will bring it.  We make history, we do something that has never been done before, make the biggest match of all-time, on the grandest stage in the world, Wrestlemania 28, John Cena versus The Rock."

The two shook hands and made the match official.  Team Bring It versus Cenation.

I have never been excited about a match a year out and for all of the haters out there, if you don't like it, don't watch.

This doesn't go to say that I didn't want it to happen at Summerslam in Los Angeles this year, because the feud would be more fresh instead of waiting an entire year to see it.

There is a chance that it still could happen at Summerslam instead of Wrestlemania, you never really know until it all plays out.

However, this year long build up to Wresltemania 28 in Miami could work, but that doesn't go without a risk. The first Wrestlemania was risky and look how that turned out

There is no doubt that this would be different then anything we have seen before, a match made, a year out.

I don't know how the rest of 2011 will play out and how much we will see The Rock, but it is a good thing that his music could hit at anytime at any show now, leading up to Wrestlemania 28 on April 1, 2012.

He might not be back every week, but he is officially going to have another match and Team Bring It is alive and well, and that, is a great feeling.