Like many in the NBA, the Charlotte Hornets spent much of the spring not playing basketball, but soaking in their past while watching The Last Dance, the 10-part docuseries that captured part of the heyday of Michael Jordan and his Chicago Bulls.

Most of these Hornets had yet to dribble a basketball by the time Jordan rose over a sliding Bryon Russell to secure his sixth and final championship in 1998. The series, and the conversations around it, offered fresh insights into a man who helped shape the current league. And for the Hornets, it was a window into the mind of the man who signs their checks.

"I wasn't able to really watch him," Charlotte's second-year guard Devonte' Graham said. "I hear all the stories, and you see the films and the clips and things like that, but you actually watched The Last Dance, it kind of put it in perspective to why he is who he is and the way he played and the way he led and carried himself, why—to me, [he's] the greatest player—he's considered to be one of the greatest players ever."

"Just actually seeing this documentary, I learned so much," he said. "I didn't even know that they won three straight [championships two times]. I'm just being honest. ... To do things like that in this league, you have to be super special. 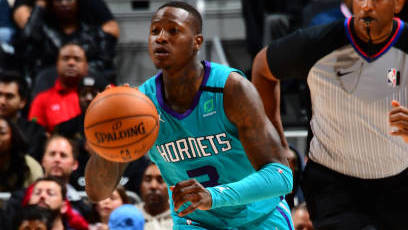 "You think you have an idea of [his mentality], but when you see this documentary, it kind of gives you chills. Me to be playing for him, the owner of the Charlotte Hornets, is super huge to me because I take that as he likes my competitive drive. He sees something in me. So ... I just want to keep getting better."

After the series concluded, Jordan held a videoconference with his youthful roster to discuss the documentary and his mentality as a player. He expanded on a competitiveness that alternately drove and alienated his teammates.

"I think my biggest thing that I [gained] is trying to be that more vocal leader, not calling people out [by] their names and stuff like that, but actually getting on guys, being comfortable getting on guys," Graham said.

While Terry Rozier admitted he may have gotten into a fight with Michael Jordan if he had played with him, he also said watching Jordan in "The Last Dance" opened his eyes.Jacob Kupferman/Getty Images

Embracing those types of difficult conversations, of course, is a fine line to walk that, as the series depicted, Jordan himself did not always navigate with care.

"We probably would've fought a couple times," Rozier said when asked how he would've taken Jordan's criticism as a teammate. "I would've taken the Steve Kerr route. [Kerr punched Jordan when a practice became particularly heated in 1995.] I'm super competitive. I would have known what he's saying is right. Maybe, it's just the way he's saying it. If it was in a crazy way, then tone it down, because I'm right here with you. Some guys are just different. Some guys you can really push to that point and some guys you just can't."

Of the current Hornets, only Rozier, Nicolas Batum, Bismack Biyombo and Cody Zeller played on teams that advanced to the playoffs. None of them are going this year, though, after the NBA's return concept prematurely ended the Hornets' season, along with seven other lottery-bound teams. For Zeller, the opportunity to pick Jordan's brain about his career was also an opportunity to consider the razor-thin margins that often separate a win from a loss.

"That was my question to him—about the difference between winning and losing, the room for error." Zeller said. "A lot of times, it was a game-winner by MJ, but it did come down to one shot or a jump ball with five minutes left in the fourth quarter.

Perhaps most revealing, however, were Jordan's views on his post-Bulls tenure with the Washington Wizards, for whom he briefly came out of retirement in 2001 for two injury-riddled seasons.

"He [said he] wishes that he would've done that a little bit differently, in that the next generation of players to come in, they really didn't want to hear the same feedback and kind of harshness that he used in Chicago. He wishes that he would've kind of taken Jerry Stackhouse under his wing and taught him how to be a better leader as opposed to try to do it all himself. He even mentioned that about today's generation was a lot different and might not want to hear the same feedback or criticism that he used to give."

For now, the Hornets are waiting to implement any lessons learned. The league has yet to determine when the teams not heading to Orlando, Florida, in late July will be allowed to gather again as the country grapples with the COVID-19 pandemic.

"I was definitely disappointed," Graham said of a season that ended with Charlotte at 23-42. "Definitely confused on how they took so many teams from the other side and only one team from the East. Like coach [James Borrego] said: You can't dwell on it. You can't cry about it. It is what it is.' We just got to take that and use it as motivation. Get better. Get stronger. Get faster. I got more time to work on my game. Just take it and use it as a motivation, like MJ did everything in The Last Dance documentary."

Michael Jordan's Hornets saw their season end early after the COVID-19 pandemic caused the NBA season's suspension and the team was then not invited to join the league's restart in Orlando.Brock Williams-Smith/Getty Images

The Spring of MJ has offered a time to reflect—not only for his team, but also for Jordan himself, who was removed from political and social issues during his playing days. (In 2016, though, he said he would "no longer stay silent.")

This month, Jordan announced he and Jordan Brand would donate $100 million to social justice and racial equality causes over the next decade, following the killings of George Floyd, Ahmaud Arbery, Breonna Taylor and so many others.

"We have been beaten down [as African Americans] for so many years," Jordan told the Charlotte Observer. "It sucks your soul. You can't accept it anymore. This is a tipping point. We need to make a stand. We've got to be better as a society regarding race."

Rozier, who recently participated in a protest in Charlotte with some of his teammates, welcomed the contribution.

"I just feel like what he said in his statement, we as African Americans have had enough," Rozier said. "I feel like he's always been there to donate and help with his piece. He's not a social media guy, which I love about Michael Jordan. He leaves his mark when he can, which is every time. I respect it. If you got it, give it up—$100 million is a lot of money."