They called it a standards meeting. It was the summer of 2008, and Team USA was coming off a disappointing third-place performance in the 2006 FIBA World Championship. So before the Beijing Olympic Games began, head coach Mike Krzyzewski gathered his staff and players together to talk about how they'd be sure to bring back gold this time.

"No bad practices," Coach K told the team. "No bad games. We only have 35 days together. Can't we make every one of them a good day?"

In the room were the likes of Carmelo Anthony, Dwyane Wade, Kobe Bryant, LeBron James...and Nate McMillan. The head coach of the Portland Trail Blazers at the time, McMillan was serving as an assistant for Team USA. When it was his turn to talk, he told the players that the most important thing was to be connected—to communicate and to be connected.

A few weeks ago, as the NBA's restart plan began to take shape, McMillan called Coach K. The Pacers and Blue Devils coaches reminisced about their time together from 2006 to 2012, and about guiding Team USA to back-to-back gold medals beginning in Beijing. To McMillan, the parallels between the Florida bubble and the Olympics were obvious. Players would be away from home for a long stretch. They'd be getting used to teammates after a long time away. And they'd be battling for a championship.

"This is a very similar situation to the Olympics," McMillan said. "You can't treat this like a regular season. You don't have that amount of time. We have to prepare to play high-level basketball in a matter of about three weeks. Then we have eight exhibition games. Then we're playing for gold."

For McMillan, the glaring difference between the Olympics and the Orlando bubble is the amount of star power he'll have at his disposal. 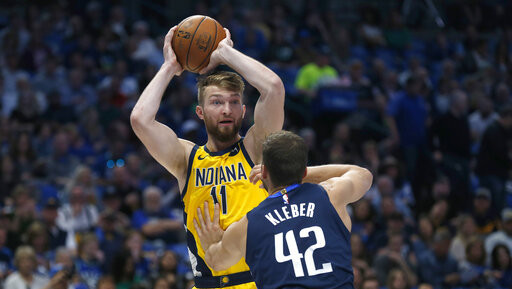 The Pacers' preseason plan involved breaking the NBA campaign into three distinct parts. The first would be without All-Star guard Victor Oladipo, who was still recovering from a ruptured quadriceps tendon he suffered in January 2019. The second would come when Oladipo worked off the rust as the team reintegrated him. And the third would be when a fully healthy Oladipo helped push the team to the playoffs.

Unfortunately for the Pacers, the plan stalled out at Phase 2. Oladipo did appear in 13 games before the season was suspended, but he has announced that he won't play in Orlando. On the bright side for Indiana, Phase 1 was a surprising success.

Seven Pacers averaged double figures in scoring, and many took advantage of Oladipo's absence to assert themselves. Malcolm Brogdon, acquired last summer in a sign-and-trade with the Bucks, emerged as a commanding floor general, averaging 16.3 points and 7.1 assists per game. In three seasons in Milwaukee, he never averaged more than 4.2 assists. Assuming that Brogdon recovers from the coronavirus (and a tweet Wednesday indicated he had), the Pacers offense should continue to flow smoothly.

Thanks to everyone who's asked how I'm feeling. I'm feeling well, and I'm ready for Orlando. https://t.co/mKOFekAeZ5

Although Indiana is missing Jeremy Lamb, who is out for the season with left knee injuries, TJ Warren and Justin Holiday have emerged as dynamic two-way wings. (Warren, averaging 18.7 points per game, is the team's top scorer.) And centers Domantas Sabonis and Myles Turner finally started to figure out how to share the floor effectively with one another. On many possessions, Sabonis would play the 5 on offense while Turner would man the 4, and then they'd switch on defense.

"Some people think it's an advantage playing against us when we've got our two bigs on the floor, but we can match up against anyone," McMillan said. "If we need to go small, we have TJ or Justin playing the 4. But if we want to be physical, not many teams can match up with our guys down low."

Make no mistake, this team is designed to revolve around Oladipo. But it showed it could succeed without him as well, going 30-17 and climbing to sixth in the Eastern Conference prior to his regular-season debut.

When Oladipo did return, the Pacers struggled to reincorporate him, going 1-6 in his first seven games back. Oladipo never looked like his best self on the floor, but he did seem to be trending in the right direction. And the team went 6-1 in his last seven games before the hiatus.

"His future health is the No. 1 priority, and we look forward to having him back at full strength for the 2020-21 season," team president Kevin Pritchard said in a statement. "This is not a unique situation for our team, playing without key players like Victor and Jeremy Lamb. This team has shown great resolve in responding to adversity and we fully expect this will be no different. We remain excited about what they can accomplish in Orlando."

To McMillan, the depth that the Pacers developed over the course of an unusual season is another analogy to his years with USA Basketball.

For many players, the Olympics are exhausting because they happen during what would normally be the NBA offseason. Instead of resting and rehabbing, players compete for their country. In this case, players are coming off a long stretch of physical rest, but staying healthy will still be a concern.

With little time to prepare and such a tight schedule between games, McMillan believes depth could be what separates teams in the playoffs. In a way, the injuries that plagued the Pacers throughout the season could be the same thing that pushes them, at long last, on a deep playoff run.

"No one has gone through any of this before," McMillan says. "No one knows how to handle or go into this type of situation. We've never played basketball in the month of August, much less the playoffs. This is uncharted territory for everyone—the NBA, the players, the coaches. This is an unexpected time, an unexpected situation, and it could bring about unexpected results."

With Victor Oladipo sidelined for most of the season, the Pacers needed to find ways to make their available players work, as they did in often deploying Domantas Sabonis and Myles Turner together.Darron Cummings/Associated Press/Associated Press

For the Pacers, that could be just what they need. They've lost in the first round of the NBA playoffs in each of the last four seasons, but they made it a goal to get past that this year. Although the circumstances have shifted rapidly in the past few months, the Pacers' main priority on the court has not.

"It's still our goal to do better than we did last year," McMillan said. "That means getting out of the first round. Our immediate goal is to go down to Orlando, get our guys healthy and give ourselves an opportunity to play. We're in the thing to try to win. That's the No. 1 goal. We're not trying to go down there and just play some basketball for the sake of it. We want to win a championship."

That attitude worked on the international stage. Soon, McMillan and the Pacers will find out whether it can translate to an equally unique setting.

Bryan Curtis of The Ringer joins David Gardner on the How to Survive Without Sports podcast to discuss how the pandemic has altered the sports media landscape. Will the NBA bubble be a ratings sensation? What will broadcasts look and sound like? And has access journalism changed forever?