Add the Philadelphia Phillies to the ever-growing list of teams willing to back up the Brinks truck for Stephen Strasburg.

Jon Heyman of MLB Network reported the Phillies are among the handful of teams considered contenders for the reigning World Series MVP. The New York Yankees, Washington Nationals, Los Angeles Dodgers and San Diego Padres are also in the mix. The Nationals are currently seen as favorites to re-sign their ace as they look for a repeat championship.

Strasburg, 31, is represented by Scott Boras, who is notorious for drawing out the free-agency process for his players to land the largest possible deal. It's unlikely we're nearing any type of conclusion in the race for Strasburg, whose transcendence in the 2019 postseason probably made him tens of millions of dollars.

The righty compiled a 5-0 record with a 1.98 ERA and 0.94 WHIP, striking out 47 batters in 36.1 innings on his way to winning the World Series MVP. His career 1.46 ERA in the postseason is one of the lowest for a starting pitcher in MLB history.

The Yankees, in desperate need of an ace to fortify their rotation, are seen as major players in the race for Strasburg and Gerrit Cole. Heyman reported the Yankees are "all in" on Cole after meeting with him this week and are also set to have a meeting with Strasburg on Wednesday.

The Phillies were among the most aggressive teams in baseball last offseason, inking Bryce Harper to a $330 million contract while also signing Andrew McCutchen and David Robertson and trading for J.T. Realmuto and Jean Segura. The result was a disappointing 81-81 campaign.

Signing Strasburg would give the Phillies an ace they've been lacking—their Jake Arrieta signing has not quite gone as planned—while also striking down a divisional foe. ESPN's Buster Olney reported the Phillies are seen as the favorites to land righty Zack Wheeler, who is among the starters on the market a step below Strasburg and Cole.

If the Phillies land Wheeler, that might take them out of the Strasburg sweepstakes. 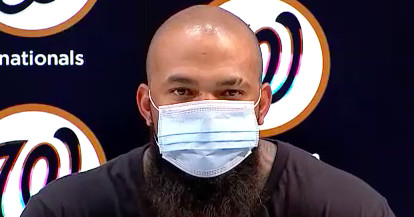 We broke down the Nationals' present and future across the outfield 👉