LOS ANGELES — "I'm not going to overreact to one game, but I do think the [Los Angeles] Lakers got to take LeBron [James] off the point."

That was Charles Barkley's take on the Inside the NBA media luncheon Wednesday at Shaquille O'Neal's "Shaquille's" restaurant at LA Live.

His comments came a day after the Lakers lost their season opener to the Los Angeles Clippers 112-102, when the team's offense sputtered after a strong first quarter. The Lakers got similar first-half results Friday night in a 95-86 win over the Utah Jazz.

"He can't play the point all night. They need to play at a much faster pace, and at his age, he can't do that," Barkley continued. "They need to find a way to speed the tempo up and get the other guys involved."

James is going to dominate the offense because he's one of the best players of his generation, but he may be better suited to playing alongside another ball-handler.

"LeBron only won a title when he had an elite creator on the wing in [Dwyane] Wade and Kyrie [Irving]," an NBA executive said at halftime.

Enter Alex Caruso, who played 20.5 of 24 minutes in the second half versus the Jazz. His numbers didn't jump out (two points, two turnovers with no assists), but his ability to handle the ball and defend opposing point guards helped make the game easier for James. 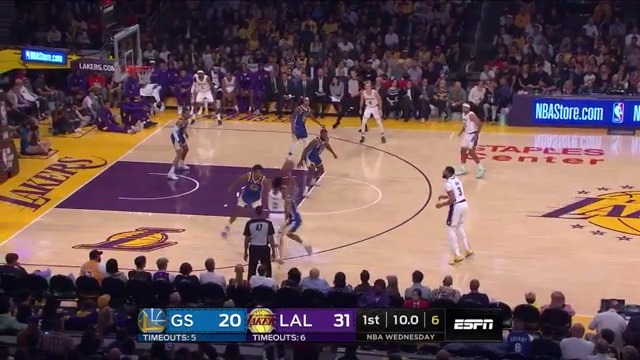 No one should mistake Caruso for Wade or Irving, but James has had the most success with another high-level playmaker alongside him.

With Rajon Rondo still sidelined with a minor calf injury Friday, coach Frank Vogel stuck with the same starting lineup for the Lakers' second game of the season. Again, James was featured as the team's point guard on offense, alongside defenders Danny Green and Avery Bradley and big men Anthony Davis and JaVale McGee.

The results were unimpressive, as Los Angeles managed just 43 points in the first half, shooting a paltry 34.8 percent from the field with 10 turnovers. The Lakers were able to take a lead into the break because of their defense, but the first 24 minutes featured ugly basketball.

Vogel may be in the early days of his first season on the Lakers bench, but he's a veteran coach. Credit him for scrapping his initial game plan at halftime and adding Caruso to the starting group in the third quarter. That meant another ball-handling guard alongside James.

"Offensively, it felt like LeBron was being asked to do too much, so we put another small in there in Alex Caruso," Vogel said.

The move seemed to open up the game for James, who scored 23 points in the second half to finish with 32, along with 10 assists.

The Lakers also got creative with their big-man rotation, moving Davis to the 5 in the second half while McGee sat.

"Rudy [Gobert] is a problem for any offense going against their defense. If you have another center out there where he's just rolling to the basket, [Gobert] can just kind of play center field and clog things up," Vogel said after the Lakers' first win of the season. "So, Anthony and I talked about it, and he was all for it."

Davis has been abundantly clear throughout his career, reiterating the notion at media day before training camp began, that he prefers to play power forward, not center. While Vogel agreed that's probably best throughout the season, at times the Lakers are going to need Davis to be flexible.

Vogel set a precedent in just the second game of the year that he's going to make the right decision for the team, regardless of his star player's preference.

"He just thought that we'd be more effective with me at the 5," Davis said. "If it makes sense, I don't mind doing it. It made sense tonight, but Coach is very smart. We're going to pick and choose when."

Keep a close eye on this one, as Davis is almost certain to opt out of his contract after the season. The Lakers need him to re-sign, and he probably will, but keeping him happy is an important part of the equation. Whatever position he likes to play, he's not going to enjoy being a Laker if the team doesn't win regularly.

"It's not necessarily something we want to go to full time, because obviously we want to keep Anthony fresh for the playoffs, but it's always in our back pocket—something we can go to against certain matchups, especially against elite rim protectors like Rudy," Vogel continued. "Both shifts in the lineup gave us a little bit of a burst offensively, and we didn't lose anything defensively."

Vogel has indicated he likes Rondo off the bench to make sure the team always has a floor leader on the court. The results against the Clippers and, for a half, against the Jazz may convince him otherwise, which could lead to Rondo pushing Bradley to the bench (or maybe Caruso sticks as the starter).

Whatever the answer, Barkley's warning seems spot on.

Naturally, the Lakers have a lot to resolve with a new head coach and several new players. Part of why the Clippers are so impressive to start the season is their continuity—the same core and style of play—with Kawhi Leonard replacing Danilo Gallinari.

The Lakers and Vogel need more time. They'll next host the Charlotte Hornets and Memphis Grizzlies, and McGee will probably return to his starting role, with Davis at power forward.

The Lakers will also be getting forward Kyle Kuzma back shortly, as he's nearing his season debut after an offseason foot injury.

"The bigger question with Kuzma will be how he fits in defensively with Davis and LeBron," an Eastern Conference executive said. "He'll be able to score, but can he guard bigger wings like Paul George?"

The Lakers have a lot to resolve before they evolve into the powerhouse they project to be. Fortunately, they'll have another 80 games to figure out what works best before the playoffs.