Antonio Brown's debut with the Oakland Raiders will reportedly be delayed due to a suspension.

Per ESPN's Adam Schefter, the Raiders intend to suspend their star wide receiver after he was involved in an altercation with general manager Mike Mayock.

Schefter added Brown and Mayock had "an exchange" regarding Brown using social media to post a letter he received from the Raiders. In the letter, Mayock wrote Brown would be fined nearly $54,000 for missing a walkthrough and training camp practice.

Ian Rapoport of NFL Network said the altercation with Mayock wasn't physical, but there was a "screaming match," where Brown said he would hit Mayock in the face. Brown then "punted the ball" and told Mayock to fine him, per Rapoport. Vic Tafur of The Athletic reported one of the players restraining Brown during the altercation was Vontaze Burfict.

Per Schefter, "there are those around the league" who believe the Raiders could suspend Brown "with the idea of trying to void the $30.125 million of guaranteed money in his contract."

Brown was absent for most of Oakland's training camp due to a dispute with the NFL over the type of helmet he wanted to wear. The seven-time Pro Bowler lost both of his grievances, but it did lead to an endorsement deal with Xenith to wear its Shadow helmet.

The Raiders acquired Brown from the Pittsburgh Steelers in March and signed him to a new three-year contract with $30.1 million guaranteed. He's expected to help rejuvenate an Oakland offense that finished 18th in passing yards and 28th in points scored last season. 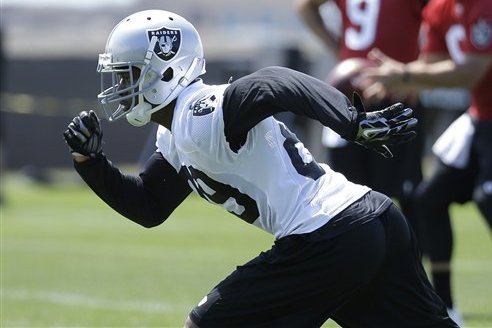 Oakland will kick off the 2019 season Monday against the Denver Broncos at the RingCentral County Coliseum.

Carlos Sanchez
via The Raider Ramble