There will be many narratives about the 2018-19 Toronto Raptors, who completed their championship journey Thursday night with a Finals-clinching victory over the Golden State Warriors. After all, they galvanized an entire country, turning a hockey town into a basketball city that sprung up Jurassic Park viewing parties everywhere from Mississauga, Ontario, to Rockford, Illinois, home of Fred VanVleet.

While the fairy tale aspect of a championship run is nothing new—and the impact this postseason has had on the future of basketball in Canada is very real—in truth, the Raptors built their championship team by going a traditional route. They stockpiled talent via trades and the draft, acquired a G League team and developed players like Pascal Siakam and VanVleet into contributors on a title team. They also executed a bold deal for one of the top players in the league.

The model feels fairly traditional when you remove the extraneous factors surrounding Kawhi Leonard's departure from San Antonio. But when you dig a little deeper, a central theme of redemption emerges about this Raptors team, specifically as it relates to the Golden State Warriors.

Any team that makes a sustained run at the championship—as the Warriors did with five straight Finals appearances and three titles—will have dashed the title hopes of many other contenders.

And as it turned out, many of those others later came together to take down the dynasty. 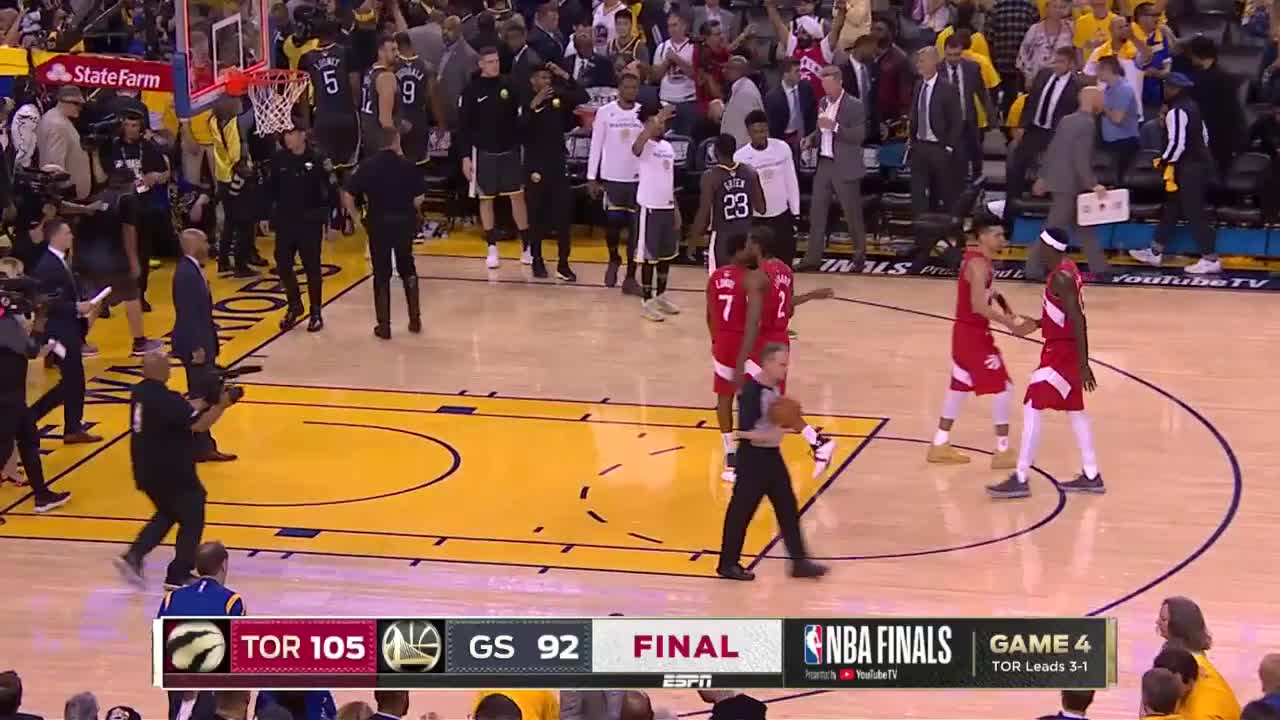 Success in the Journey

When the Warriors started their run in 2015, they went up against the Grit and Grind Grizzlies of Memphis, led by Marc Gasol, Zach Randolph, Mike Conley and Tony Allen. Memphis appeared to have Golden State's high-powered attack figured out and took a 2-1 series lead with Game 4 at home.

Instead, the Warriors responded to the first crisis of their eventual title run by winning the next three games. Gasol finished the series averaging 19.2 points, 11.2 rebounds and 1.2 blocks.

It signaled the end of an era in Memphis. The Grizzlies haven't won a playoff series since, and Gasol was traded to the Raptors at the 2019 deadline.

In 2016, as the Warriors marched toward the NBA Finals, they ran into another team that looked to be on the verge of a dynastic run. Led by Kevin Durant, Russell Westbrook, Serge Ibaka and Steven Adams, the Oklahoma City Thunder seized a 3-1 lead in the Western Conference Finals. We all know what happened.

OKC lost the next three games, Durant joined the Warriors in the offseason, and Ibaka was sent to Orlando in a trade for Victor Oladipo. Ibaka had averaged 12.4 points, 7.9 rebounds and 1.3 blocks in the series against Golden State.

Ibaka ended up in Toronto the following season in a midseason trade for Terrence Ross.

Once again, the Warriors thwarted another potential contender from rising up, breaking it up in the process.

And then there were the Spurs, who appeared ready to challenge Durant and the Warriors in the 2017 Western Conference Finals. With Leonard leading the way in Game 1, the Oracle Arena crowd was silenced as San Antonio raced to a 25-point lead in the second quarter. But Leonard suffered an ankle injury in the third quarter that removed him from the series.

The Warriors came back in the first game and swept the series. Leonard was a Raptor by summer 2018.

Memphis, Oklahoma City and San Antonio are no longer contenders, but key figures from those postseason runs ended up becoming teammates in Toronto this season, and they all, together, had their chance at redemption against the Warriors.

Danny Green, who was also traded to Toronto in the Leonard deal, was asked by reporters before the Finals whether he believed the Spurs would have beaten the Warriors in 2017 had Leonard been healthy.

"Woulda, coulda, shoulda," Green said. "It's hard to say. I think we had a good chance of winning Game 1 for sure. And certain games can change the series; you never know, but it would have been nice to see or it would have been interesting to find out if he was, if we had a healthy Kawhi. But he wasn't, so we had to go without him and figure it out from there. And we lost to a really good team. It wasn't meant for us to win that year or for us to be 100 percent healthy."

These Finals provided an alternate reality wherein Green, who hit six three-pointers in a crucial Game 3, and Leonard—the Finals MVP—got another chance, with a new team, to face the Warriors.

Before the Finals, Gasol passed up several opportunities to reminisce about his basketball journey from Memphis to Toronto and his first chance to win an NBA title in his 11th season in the league. "I'm not trying to reflect on it yet, to be honest," Gasol told reporters days before Game 1. "I'm not looking back. I'm just looking forward and looking to obviously now the Warriors."

Gasol could have reflected back to just weeks ago, when, in Game 2 of the Eastern Conference Finals against the Milwaukee Bucks, he looked rattled and sputtered to a 1-of-9 performance in a 125-103 loss. After that game, Gasol recovered and never relinquished his role as the nucleus of Toronto's free-flowing offense, as the Raptors went 8-2 in their next 10 games versus the Bucks and Warriors to win the championship. The Leonard trade made the championship possible, but the Raptors wouldn't have reached the Finals without Gasol's defensive efforts against Nikola Vucevic and Joel Embiid in the first two rounds.

A reporter asked Ibaka before the start of the Finals whether blowing a 3-1 lead to the Warriors was the toughest defeat of his career. "Yes, of course, yes," Ibaka said. "Come on, man. [A lead of] 3-1 in the semifinals of the NBA—I don't see any tougher loss than that. Anytime I think about it, man, it still hurts. It still hurts."

Ibaka was also seven years removed from his only Finals appearance before he returned this year. After being Toronto's starting center for most of the season, he shifted to a bench role following the Gasol trade, and after a rocky stretch, he found his rhythm in these playoffs. Ibaka came up huge in key moments again and again, including in these Finals, in which he had six blocks in Game 3 and followed that up with a superb 20-point performance in Game 4.

Every player on the Raptors who, at one point, faced the Warriors during their five-year run found themselves in Toronto, together as teammates, for many reasons, including the fact they failed to push past Golden State in previous attempts.

In the 2019 Finals, they all got to write that story over—the victorious final chapter that had eluded them at previous stops.