The azaleas are in full bloom in Lake Forest, Illinois as the Chicago Bears are using what special-teams coordinator Chris Tabor calls "Augusta Silence" to find a new kicker after the team cut Cody Parkey this offseason.

Augusta National Golf Club is the home of the Masters golf tournament, which features much quieter galleries than the norm.

"No one talks," Tabor told reporters after the team's OTA session Wednesday.

"Obviously we're doing the 'Augusta silence' [for a reason]. That's been awesome. I am used to people yelling at me. You know, I'm used to, I mean my daughters and my wife will yell at me, so I'm used to it. But when it's quiet out there it is, it is a different feeling. [Bears head coach Matt Nagy] and I have talked about it ... it's different."

The Bears have three candidates for the job: Chris Blewitt, Elliott Fry and Eddy Pineiro.

Blewitt kicked for the University of Pittsburgh from 2013-16, making 69.6 percent of his field goals. He has no NFL experience.

Elliott Fry last kicked for the short-lived AAF's Orlando Apollos, hitting all 14 of his field-goal attempts with a 44-yard long. He played for South Carolina from 2013-2016 and made 75 percent of his field goals. Like Blewitt, his next NFL game would be his first. 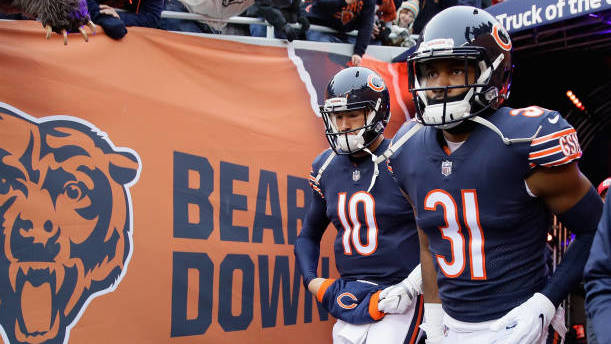 Pineiro hasn't appeared in an NFL game, either, but he had the most collegiate success. In two years at Florida, the 24-year-old nailed 38 of 43 field-goal attempts, including a Division I-leading 94.4 percent in 2017. He suited up for the Oakland Raiders during the 2018 preseason but was placed on injured reserve Sept. 1.

All three must deal with the Augusta Silence, which Nagy supports.

"We're creating as much pressure as we can on these guys," Nagy told reporters. "We're getting the 'Augusta Silence' out here with the team and that's eerie."

Eerie is a good word to use, as kickers are used to tens of thousands of screaming people when they line up for kicks. Hearing nothing instead could throw anyone off their game, so maybe the quiet will prove beneficial.

However, it's abundantly clear that the Bears are adamant about shoring up their kicking game. Parkey went just 23-of-30 last season and missed three extra points.

He had a chance to kick the Bears into the NFC divisional round against the Philadelphia Eagles, but a 43-yard try with seconds left was partially blocked, leading to a 16-15 loss.

If the Augusta Silence works out for the Bears, perhaps they've found a tradition unlike any other. Until then, Chicago hopes that its new kicker can help the team improve upon a 12-4 season that ended abruptly.