Dylan Bundy is only one Orioles pitcher who can't keep the ball in the yard.Associated Press

Through two months, the 2019 Major League Baseball season is on track to make home run history. The 1.33 homers per game that have been hit so far is the highest rate of all time.

There are explanations aplenty for this, yet a shockingly significant one is the very existence of the Baltimore Orioles.

Orioles pitchers have already claimed a place in baseball history that they'd rather not have. When New York Yankees outfielder Clint Frazier went deep off David Hess at Oriole Park at Camden Yards last Tuesday, the fastest-ever journey to 100 home runs allowed was completed:

The Baltimore Orioles have allowed their 100th HR of the season in their 48th game; the previous MLB "record" for quickest to allow 100 HR in a season was 57 games by the 2000 Kansas City Royals.

Orioles pitchers have since allowed 14 more long balls to bring their total to 114. One only needs to refer to the 2015 Pittsburgh Pirates to find the last time a team didn't allow that many homers over an entire season.

Perhaps it's needless to say, but the Orioles pitching staff is indeed on track for a new single-season home run record. Its average of 2.1 allowed per game points to a final destination of 340 home runs. That would break the 2016 Cincinnati Reds' single-season record by...wait for it...82 home runs.

The bright side for the Orioles is that their 5.84 team ERA is only the worst of the 2019 season and not of all time. It is, however, the highest since the 1999 Colorado Rockies finished with a 6.03 ERA.

The Orioles are also suffering from an offense that ranks 12th in the American League in runs per game. Hence their 16-37 record, which puts them on pace for a second straight season of more than 110 losses. Clearly, this is a team that still has a long way to go with its rebuild.

In the meantime, let's narrow down the root causes of the worst case of homeritis in baseball history.

In fairness to Orioles pitchers, some of the things fueling their home run rate are beyond their control.

This is an extreme home run era, after all, and the primary reasons for that include a ball that's almost certainly juiced and a new breed of hitter who's all about launch angle and exit velocity. To wit, the Orioles aren't the only 2019 team that features prominently on the list of highest-ever home run rates.

Oriole Park at Camden Yards isn't helping, either. It's a notorious launching pad, and it's thus far lived up to its reputation by allowing 64 of the Orioles' home runs.

A handful of those long balls wouldn't have made it out of, say, Kauffman Stadium in Kansas City:

The Orioles' early-season schedule also hasn't been of much help. They've played 18 games against the Minnesota Twins and New York Yankees, who rank first and fifth in home runs, respectively, plus a three-game series against the Colorado Rockies at the ever-slugger-friendly Coors Field.

These 21 games comprise only 39 percent of Baltimore's season, yet they've yielded 58 percent (66) of the team's home run output.

Still, only so much blame can be placed on Orioles pitchers' circumstances. Take it from first-year manager Brandon Hyde, who marked his team's record-breaking march to 100 homers with brutal honesty.

"We're facing good teams, but you've got to pitch," Hyde said, per Nathan Ruiz of the Baltimore Sun. "You've got to pitch here, stay off the barrel. You've got to be able to locate, and if you don't, in a hitters’ ballpark, against guys that mash, you're going to give up 100 homers 40-something games into it."

You do indeed "got to pitch." And the hard truth is that Orioles pitchers just aren't very good at that.

It's partially a stuff problem. Orioles pitchers are tied for 20th in average fastball velocity. They also rank 18th in average spin rate.

With that kind of modest action on their pitches, it's no surprise that only the Kansas City Royals and Texas Rangers are drawing swings-and-misses at a lower rate than the Orioles. Their 22nd-ranked ground-ball percentage also shows that batters have had an easy time elevating against them, and fly balls and line drives off Orioles pitchers have traveled at an MLB-high 95.1 mph.

Further, Hyde was on to something when he said "you've got to be able to locate." Orioles pitchers are among the worst at finding the strike zone. They've also been unable to trick hitters into chasing their pitches, as they have one of the lowest swing rates outside the zone.

Not so coincidentally, Orioles pitchers are throwing an MLB-high 30.4 percent of their pitches with the hitter ahead in the count. The price they've paid for that is an MLB-high 55 home runs allowed in such counts, the majority of which (35, to be exact) have come on pitches in the heart of the zone.

On one hand, there are the veterans whom the Orioles are hoping to turn into trade chips. These include 30-somethings Andrew Cashner, Dan Straily and Alex Cobb. Though Cashner has had an OK year, the trio's collective rate of 2.8 homers per nine innings is solid proof that each is past his prime.

On the other hand are Baltimore's many 20-something pitchers, among whom is only one formerly elite talent (Dylan Bundy, who peaked as MLB.com's No. 2 prospect in 2013) and one of the team's current top talents (Branden Kline, whom MLB.com rates as the Orioles' No. 21 prospect).

Right-hander Shawn Armstrong and left-handers John Means and Paul Fry have done well for themselves, but that's about where the success stories run out. Bundy and Hess, in particular, have taken up a place on the opposite side of the spectrum with a combined 2.6 HR/9 rate.

Mercifully, there is hope on the horizon.

The Orioles already have some exciting pitching prospects in lefties DL Hall, Keegan Akin and Zac Lowther, as well as righties Grayson Rodriguez and Blaine Knight. More should enter the team's system via the draft and international market in the coming years. Overseeing everything is general manager Mike Elias, who came to the Orioles from a Houston Astros organization with a reputation for getting the most out of its pitchers.

For now, though, the Orioles pitching staff is a motley crew of guys who are either trying to hang on or simply get a grip. When combined with their extraordinary external circumstances, what you get is indeed a foolproof recipe for historic pitching futility.

All the Orioles can really do is wait it out. All their opponents can do, meanwhile, is line up at the bat rack.

Orioles catching duo is thriving in the early going 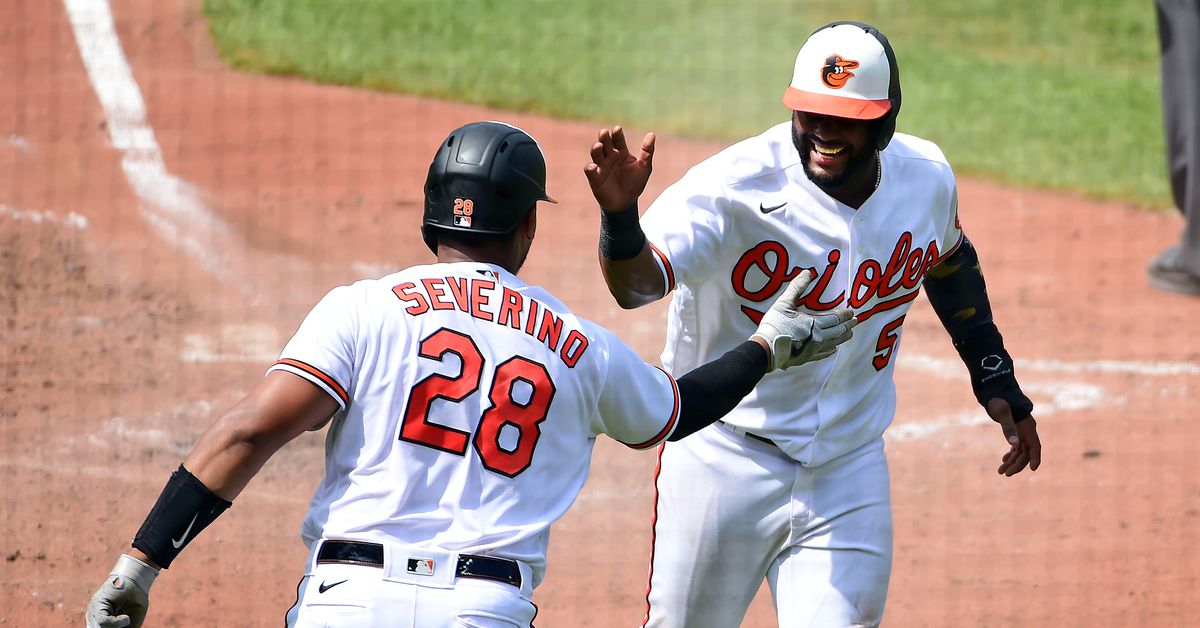 Orioles catching duo is thriving in the early going