Kobe Bryant is no longer lacing it up for the Los Angeles Lakers, but that didn't stop him from trash-talking Golden State Warriors fans on Monday.

"We'll be champions again before you know it," Bryant said of the current position for the Purple and Gold, per Goon. "And we'll be laughing in the faces of all those Warriors fans who came out of nowhere."

Golden State has earned those bandwagon fans Bryant alluded to by reaching the last four NBA Finals and winning three of them. What's more, the Warriors won an NBA-record 73 regular-season games the one time they didn't lift the Larry O'Brien Trophy during their run.

While the 16-9 Warriors occupy the No. 4 seed in the Western Conference at this point, it is difficult to envision the Lakers or anyone else beating a team featuring Stephen Curry, Kevin Durant, Klay Thompson, Draymond Green and DeMarcus Cousins come the playoffs.

The 14-9 Lakers sit in the No. 5 seed and do have LeBron James—who figured out how to topple the Warriors in the 2016 NBA Finals on the Cleveland Cavaliers—and a young core featuring Kyle Kuzma, Lonzo Ball, Brandon Ingram and Josh Hart, but they will likely need additions down the line to compete with Golden State.

Bryant will apparently be ready to laugh at the defending champions if and when that does happen. 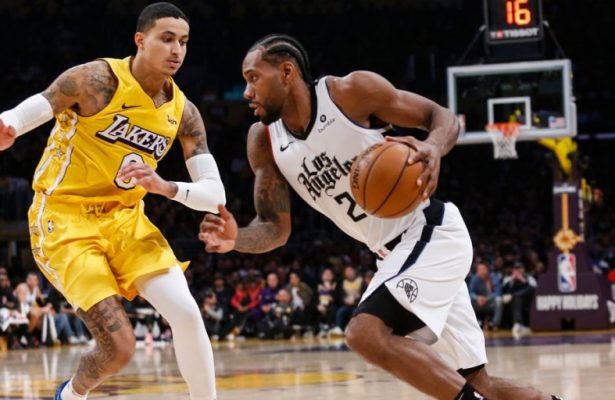