UFC 130: Rampage Jackson and the 6 Most Devastating Slams in MMA History 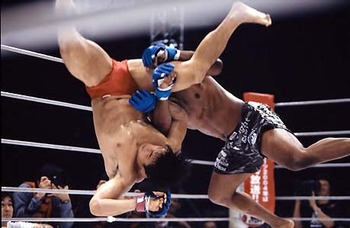 As much as we love to see flying knees and spinning back fists, there is something beautiful about a good old powerbomb to the mat.

So simple, yet so destructive.

There are few guys who have the raw power and technique to execute a slam, but when everything comes together there is nothing quite like it.

Here are the six best slams in MMA history.

Frank Shamrock is probably the most underrated fighter in history.

This slam took place in the middle of his UFC Light Heavyweight title run back in the late '90s, when Shamrock was all but unbeatable.

It only took Shamrock 22 seconds to knockout Zinoviev with this brutal slam, breaking the Russian's collarbone and ending his fight career in the process.

For obvious reasons wrestlers are the best in MMA at using slams effectively, and CB Dollaway was little more than a wrestler when he made his MMA debut back in 2006.

Fresh out of Arizona St, Dollaway fought Chuck Pablo, who was already 0-2 in his young MMA career.

It took "The Doberman" 17 seconds to end the fight with an impressive slam and get one step closer to the UFC.

Matt Hughes has become famous for his slams, but none compare to his knockout of Carlos Newton at UFC 33.

Newton locked in a tight triangle choke and had Hughes on the brink of unconsciousness before Hughes slammed the champion to the mat to end the fight.

The win was the beginning of one of the greatest title reigns in MMA history and showed the fans the warrior spirit that Hughes become known for.

A lot of people don't like Women's MMA, but when there are fights like this one no one complains.

After Strikeforce put a title match as the co-main event of a Strikeforce Challengers card a lot of pressure was on these women to perform.

Kaufman retained her Strikeforce title with this wonderful slam on Roxanne Modafferi, making sure they never disrespected the women's division again.

Gerald Harris is a powerful dude.

After earning a knockout of the night bonus just two fights before, Harris decided he wanted even more money and took out BJJ specialist Dave Branch with this highlight reel slam.

There are so many words that have been used to describe this sacred moment in MMA history, but I'll just use one: devastating.

Watch it, enjoy it and leave me some comments on some of the ones I missed.