Carson Wentz has never appeared in a playoff game.

He didn't take down the mighty Patriots.

He may have a Super Bowl ring, but he hasn't earned one. Not yet anyway.

All of that was a man who will be on the opposite sideline Thursday night when the Eagles take on the Jaguars and their new starting quarterback, free-agent signee Nick Foles.

Did Philly make the right decision? Should the Eagles really have let go of the only QB in franchise history to deliver a Super Bowl victory? Is it smart to put so much faith in, and pressure on, their chosen son, the 2016 No. 2 overall pick Wentz?

Ahead of this reunion (of sorts—neither quarterback is expected to play much if at all in the preseason game), Bleacher Report asked these questions of scouts, coaches and execs around the league. And we found a strong consensus: Yes, yes, and emphatically yes.

The past is the past, this team belongs to Carson Wentz in the present, and both the Eagles and their star quarterback could be on the precipice of an explosion. 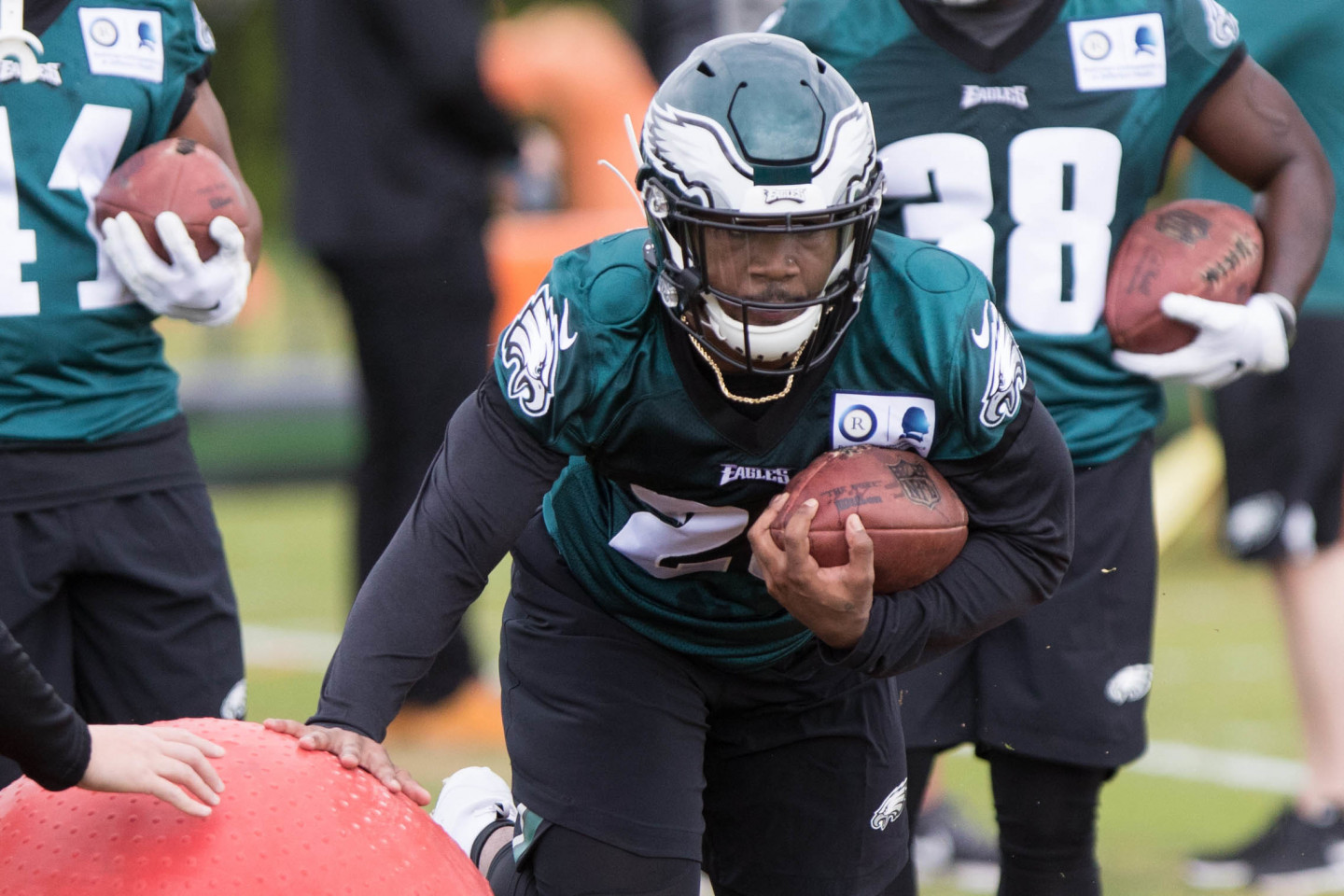 "I think people forget just how special Carson is," one longtime NFL scout says. "It's not crazy to expect him to be on the level of Patrick Mahomes as the future of the position. Tom Brady and Drew Brees are nearing the end. The next 15 years, we could be talking about Pat and Carson.

And the skill set is that rare.

This isn't some up-and-down quarterback or prospect who's shown a few signs that people are hoping point to a breakout. This is a future-of-the-league type of talent, ready to take over. When scouts look at Wentz, they see a special blend of size, athleticism, accuracy and quick decision-making skills, which is why the Eagles traded up to steal him out from under the rest of the NFL after the Rams selected Jared Goff with the first pick in 2016.

Of course, to achieve any of that potential, Wentz must stay healthy, and so far that's been the struggle. After starting every game as a rookie, Wentz's 2017 season ended with the ACL tear that opened the door for Foles' near-perfect run into and through the playoffs. The win catapulted Foles into the fanbase's hearts, but everyone knew that once Wentz returned, he would be the lead man again. But then his return was cut short by a stress fracture in his back late last season—an injury similar to one he suffered in high school that was discovered during his redshirt freshman season at North Dakota State.

Even coming off the injuries, the Eagles showed everyone how all-in they are on Wentz by signing him to a four-year contract extension worth $128 million ($107.9 guaranteed) that will keep him in green and white for six more seasons. The decision-makers felt confident enough in Wentz's talent, potential and ability to stay healthy to make him the league's fourth-highest-paid quarterback. That's a lot of faith, but Wentz's ability on the field and his personality off it has the team convinced he's the answer.

To many, that's been apparent from the beginning.

Senior Bowl executive director and former NFL scout Jim Nagy remembers seeing Wentz in 2016, when he came to the event as a draft darling but was unproven against top competition "Physical talent aside, and he has tons of that, the thing that separated Wentz was just who he was as a person. Most 21- or 22-year-old college kids aren't truly comfortable in their own skin, and that wasn't the case with Carson. Very grounded. Mature beyond his years.

"When we interviewed him at the Senior Bowl, he blew away the whole room. He just had a really cool way about him. It was easy to see why his teammates want to play for him. His leadership traits were obvious."

Adds a personnel executive who was heavily involved with scouting Wentz for another team: "What we loved about him is that you have this type-A personality who is a leader and a bit of a maniac about details … but he was a great dude. Teammates loved him. Coaches loved him. All he cared about were hunting and ball. That's what you want in a quarterback. We ultimately didn't get a chance to draft him [because the Eagles traded up], but we would have. We loved everything about him."

The Eagles need to see that version of Wentz as he compartmentalizes and moves past his injuries, especially with no fallback plan after Foles' departure and key backup Nate Sudfeld's wrist injury. It's Wentz and Cody Kessler in the quarterback room, so the pressure is on for a player who has suffered major injuries in three of his last four seasons, dating back to a broken wrist at North Dakota State in his senior season.

There is plenty of belief in him, though.

In his press conference last week, offensive coordinator Mike Groh remarked on the fantastic camp that Wentz is having. "I think he's had a tremendous camp, I really do," Groh said. "He's come out here to work, he's playing fast, communicating great with everybody. Made a lot of really, really good throws, completion percentage is very high. I think he's had a very productive camp."

Bleacher Report's Mike Tanier saw much of the same when he visited Eagles camp. "Wentz looks great," he wrote. "There are no signs of injury issues. There's plenty of talk about Wentz looking leaner (maybe by a few pounds) and changing his pre- and post-practice routines to stay healthy. But there's no reason to think that Wentz will continue to cope with the injuries that have kept him from playing a full 16-game season. Remember that Matthew Stafford was considered a chronic injury case early in his career. Now, you can't get rid of the guy."

CBS Sports' Jason La Canfora wrote after a practice he observed: "I am on board with the Carson Wentz MVP hype. Not that he wasn't always in great shape, but he looks incredibly lean and agile this summer. Unencumbered by a knee brace, he was slinging the ball all over the place at the practice I observed. There is so much multiplicity and versatility in his assortment of receivers and tight ends, and with a forward-thinking head coach, the sky is the limit on offense."

There have been other reports from camp that have been less optimistic, but one Eagles scout said to pump the brakes on any concerns being raised. "People are worrying just to get clicks," he said.

"Training camp is when you learn. He's working back from an injury and testing his limits and his body."

So what's the ceiling?

The answer from those who scouted Wentz coming out of North Dakota State, those who work with him daily and even his opponents is that he has the mental and physical toughness to handle the adversity of another injury and the talent to make fans forget about Foles' fairytale runs and emerge as a truly elite NFL quarterback.

The flashes have been there. Look at Wentz's 11-2 record in 2017, when he posted 33 touchdowns to just seven interceptions for the league's best TD-INT ratio and looked like an MVP candidate. And before his injury in 2018, he tossed 21 touchdowns in just 11 games, many of them played with a sore back. If he can stay healthy and repeat that production, all he needs to add is a Foles-like playoff run.

Those are the goals set by those in Philly. Resident B/R Eagles fan Adam Lefkoe sums it up well. "Completing a 16-game season is definitely up there," he says. "Continuing to run but being smart about contact is everything. Playoff success."

That will come for Wentz if he's able to handle the rigors of a 16-game season. We saw the development between his rookie and sophomore seasons that pointed to his talent and ability to learn and improve. The 2018 season was a bit of a wash due to injuries both to Wentz and the players around him, but he still showed the type of quarterback he can be.

And he has the team around him. The Eagles have a premier head coach in Doug Pederson, a top-five offensive line and one of the league's best defenses, coordinated by Jim Schwartz. The current over/under is 10 wins, set by Caesars Palace. The promised land of a Super Bowl victory is achievable with the franchise quarterback under center. Without him? The Eagles are a talented but lost team.

Expectations are high for Wentz and the Eagles—inside the team's facility, among the fanbase and around the league. Can he finally climb the ranks of NFL quarterbacks and emerge as the face of the franchise and superstar he's shown flashes of?

The talent and potential are obvious. Scouts are ready to call Wentz a top-five NFL quarterback. He just has to stay healthy. If he can do that, another Super Bowl ring is the expectation. And this time, the ring will be all his.

4 New Roster Rule Changes That Could Affect Eagles in 2020

4 New Roster Rule Changes That Could Affect Eagles in 2020