HOUSTON—Pick any point of the Houston Rockets' current season, and there's no time in which they haven't been the living embodiment of Chinua Achebe's Things Fall Apart.

Loss of key personnel? Check. Major injuries? Check. A complete departure from the identity that made them the team with the NBA's best record last year? Check.

And yet, through it all, they've found a way to be resilient because of the otherworldly play of James Harden.

No Chris Paul, Eric Gordon or Clint Capela? No problem for The Beard.

But lost in Harden's ascent to the top contender for this season's Most Valuable Player is this: The Rockets are slowly regaining their defensive identity, and it's all due to the return of associate head coach Jeff Bzdelik.

"He's been great," said Harden, who just passed Elgin Baylor with his 19th consecutive 30-point game. "We were missing him the first few months of the season, but he brings that tenacity, that dog to the coaching staff that we all need. He tells us from top to bottom when we're wrong, and he praises us when we do a great job. So we're happy to have him back."

"He has a good relationship with players, that's the biggest thing," Rivers added. "Usually, the defensive coach does it his way, and when things don't work out, he gets frustrated, and there's tension between the players and the coach. But he does a great job of communicating with us and seeing what works as a team."

Asked by head coach Mike D'Antoni and Rockets owner Tilman Fertitta to delay his retirement, Bzdelik put down his fishing pole and returned to the team's sidelines full time the day after Thanksgiving.

"There's great people here, and they asked me to come back, and they've been so good to my wife and I that it was hard to say no to people that you really admire and care for," Bzdelik told B/R.

During the first nine games after his homecoming, Houston went 2-7, including an embarrassing 107-104 loss to the Dallas Mavericks, and bottomed out at 14th place in the Western Conference standings.

Additionally, they had the fifth-worst defense after allowing 112.2 points per 100 possessions and were the second-worst defensive rebounding club at 68.5 percent.

"We've only had two practices in terms of really being able to get out there and practice and sweat," said Bzdelik, who noted that no one in practice can even stop Harden from scoring. "So to show on film and to walk through is not the same thing as actually having that muscle memory of actually doing it in a habitual way."

Something must have clicked, though, because the Rockets went on a 10-1 run to finish out December and improved their defensive rating to 108.2 points allowed per 100 possessions.

"Switching helps because, like Denver got torched the other day because their bigs weren't up on screens, and so if your bigs aren’t up on screens ready to switch out, their bigs like Kevon Looney and Draymond Green have free shots on [Kevin] Durant's defender, [Stephen] Curry's defender and [Klay] Thompson's defender," Bzdelik said. "And if you get a clean hit on one of those defenders, they get air space, and they're deadly, so you gotta be up at the level to switch out to take away their air space, and in order to do that, you have to switch everything."

Houston's late-December tear was partly due to the adjustment of their switch-everything philosophy.

Instead of switching everything, they focused on switching only on the perimeter and having Clint Capela stay home to grab defensive rebounds. Because of that minor tweak, they were able to raise their defensive rebounding rate to 72.9 percent.

"Our injuries have prevented us from switching everything," Bzdelik added. "And so we started keeping Capela home. It's something that we wanted because it's been hard for us to rebound."

Bzdelik's had his hands full with the new rules aimed at cracking down on contact made by defenders off the ball. It is illegal for them to impede, wrap and hold or push offensive players. This new rule has created a freedom of movement for offensive stalwarts like Curry and Thompson of the Golden State Warriors and for other teams that feature rapid ball movement such as the Los Angeles Lakers and the Milwaukee Bucks.

Combating the new rule has proved difficult for most teams, including the Rockets.

"Like coming in on a single-side tag and getting out to a three-point shooter to take away a lob and take away a three on a single side, it's almost impossible. It really is. You got a guy like Kyle Korver on the weak side, or you got a guy like Capela rolling to the rim and you got a guy like Harden coming off that ball screen, what do you do? If you help on James with the big and the 'single-side tag' guy has to come in to help momentarily to prevent the lob and then the guy throws it to an open shooter like Korver, something's going to give, so you switch. You have a chance to combat all three of those options."

It hasn't been easy to thwart long-distance shooters this year, but Houston has had success limiting players like Damian Lillard, Paul George, Bradley Beal, Curry and Thompson with their defense of the three-point line.

"Well, you gotta pick them up four big steps beyond the arc," Bzdelik said. "When we switch, our rules are switch to deny, switch to force a turnover and switch to take away a three. So you want to aggressively switch. Now, in order to do that, you have to have them above the three-point line to begin with, and so the other thing too is we have a low man. We don't usually have a nail man, so we don't give up any open slot threes. And so teams want offensively to get threes and get layups and draw fouls, so we want to foul with the chest, we want to switch to take away threes, pick people up way above the arc and have a low man to protect the rim and take away layups."

With Capela out at least a month with an injured right thumb, it will be difficult for the Rockets to protect the rim. They only have PJ Tucker and Nene patrolling the paint, since their big-by-committee strategy with Marquese Chriss and Isaiah Hartenstein crashed and burned before it got off the ground.

There is hope that Kenneth Faried, who is expected to clear waivers Monday after agreeing to a contract buyout with the Brooklyn Nets, will fill some of the rebounding and defensive void left by Capela, but surprisingly, he's not their only hope for post defense.

Yes, he said Harden was a great post defender. D'Antoni agrees, especially after the league's leading scorer, who finished Saturday's game against the Lakers with 48 points, eight rebounds, six assists and four steals, successfully defended Ivica Zubac on the low block in the second half of Houston's 138-134 overtime win.

"He's pretty strong in holding his ground, and he's good at stripping the big guys when they bring the ball down," Tucker said. "So me taking [Kyle] Kuzma and putting James on the big guy was a big adjustment for us in the second half."

For his part, D'Antoni is tired of the narrative that Harden is not a good defender.

"They're trying to find something that he's not Superman at," he said. "I think his defense has been underrated for a while. Every once in a while, he'll take a play off, and they'll zoom in and say look, look, look. You can do that with every player in the NBA if you wanted to, if you want to make that narrative, you can make it, you can nitpick him and find something, but it's just the narrative that you want to make.

A quick internet search will reveal a number of memes directed at Harden's defense or lack thereof, but it doesn't bother the six-time All-Star.

At the beginning of the season, Houston was lambasted for letting top defenders like Luc Mbah a Moute and Trevor Ariza walk in free agency, only to replace them by Carmelo Anthony, who is not known for his defensive prowess.

Many fans and analysts attributed the Rockets' early struggles to the loss of those two, but that wasn't a fair assessment, according to Bzdelik.

"They had guys hurt, and because they were hurt, they weren't in great shape, so it wasn't anybody's fault," he said. "And with Trevor and Mbah gone, you lost experienced guys, and we were trying to replace them with new guys that weren’t acclimated to a system, so it was like a perfect storm of stuff."

With CP3 expected to come back soon, Bzdelik's schematics will likely take another step forward, allowing for stronger defense on the perimeter and an easier path to continue the climb in the rankings.

"Bzdelik was one of the guys who taught me defense when I was young in Denver, and his philosophies are sharp," Nene said. "You just gotta listen to him and do what he asks you to do. It's simple: Be communicating, do your effort, do your best, and good things happen when we do that."

Considering Houston's injuries, the fact that the team went 9-7 before Bzdelik and then 17-12 and improved to fifth place in the West since his return shows that the Rockets made the right decision in bringing him back.

"You just gotta look at the score and our position and where we were before him and after him," Nene said.

Unless otherwise indicated, all stats courtesy of Basketball Reference or NBA.com. 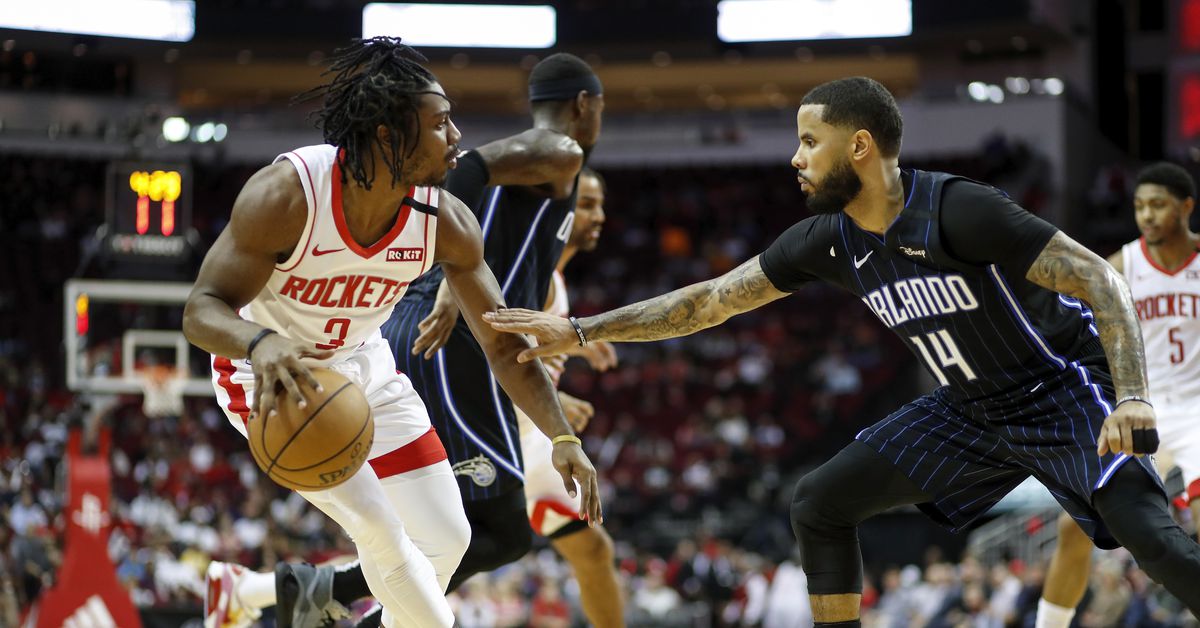 Jeremy_Brener
via The Dream Shake