USC wide receiver Joseph Lewis was arrested on a felony domestic violence charge Wednesday night after an alleged altercation with a woman at a Los Angeles residence.

On Thursday, TMZ Sports reported the woman fled the home and called police, who later arrested Lewis. He was taken into custody on $100,000 bail.

In February, Lewis was arrested on five misdemeanor charges related to a domestic violence case. He accepted a plea deal that saw him serve 21 days in jail.

No further information about the altercation was immediately released.

Lewis was suspended indefinitely from the Trojans' football program following the February arrest. He told the Los Angeles Times in May that he was hopeful of being reinstated for fall camp, which is scheduled to begin Aug. 3.

The L.A. native was a 5-star prospect and the No. 31 overall player when he committed to USC as part of the 2017 recruiting class, per 247Sports.

He made four catches for 39 yards and no touchdowns in 11 appearances as a true freshman. 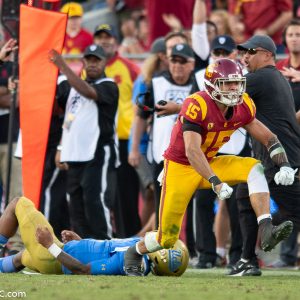