NFL MVP Aaron Rodgers didn't have the best season of his career statistically in 2014, at least not compared to his record-setting 2011 season—his passer rating of 122.5 still stands as the highest in NFL history.

But overall, and in ways that don't always show up on the stat sheet, Rodgers was at his best in 2014, showing grit, determination and improved decision-making as he led his team to a 12-4 finish and the NFC Championship Game.

For his part, speaking in October, head coach Mike McCarthy thinks Rodgers is a "much better player now" than in his 2011 season, per Fox Sports Wisconsin's Paul Imig:

Rodgers may never hit the numbers he put up in 2011 again; most quarterbacks won't achieve those kinds of numbers in their entire career. But his 2014 campaign was about perseverance, precision and keeping his team alive in improbable moments. The following five plays showcase the best of Rodgers' MVP season.

5. Week 13 vs. New England Patriots: To Cobb in Double Coverage

It wasn't the flashiest play of the day—that distinction went to the 45-yard catch-and-run touchdown by Jordy Nelson in the final seconds of the first half.

But it was Rodgers' seven-yard completion to Randall Cobb on third down just before the two-minute warning that sealed the hard-fought game for the Packers, by keeping the ball out of Tom Brady's hands.

Green Bay's final drive of the game began with 2:40 left on the clock, and because New England had two timeouts remaining, the Packers needed to get one first down to be able to kneel out the clock.

2nd-and-8: Lacy around the right side for four yards.

3rd-and-4: Time to pass. Cobb lined up in the backfield and then went into motion. Rodgers took a beat in the pocket and then fired a dart to Cobb, who was wrapped up by two defenders and yet, somehow, managed to make the catch.

Had Rodgers not squeezed the ball into that seemingly impossible window, the Patriots would have gotten the ball back, trailing by just five points with two minutes left on the clock: an eternity for Brady.

But with his pinpoint accuracy, Rodgers' throw sealed the win.

The Packers were "aggressively treating" Rodgers' calf injury prior to the divisional-round matchup against the Dallas Cowboys, but it was clear once he got out on the field that he was not right. Rodgers' mobility was severely limited, and though he is not known for gaining significant yardage with his legs, he nevertheless has come to rely on his mobility to keep plays alive.

But against Dallas, Rodgers was mostly limited to the pocket, and it cost him certain opportunities. Speaking to the media after the game, Rodgers noted that the four-yard touchdown pass he threw to Andrew Quarless at the end of the first drive was a perfect example of his limitations.

"I feel like with my normal mobility, I would have just been able to run that one in," Rodgers said in his postgame presser. "But as I moved forward in the pocket, I realized I wasn't able to do a whole lot."

That fact became crucial early in the fourth quarter, when Green Bay trailed Dallas by one point. Rodgers had made an impressive 46-yard touchdown pass to Davante Adams late in the third, but other plays had gotten away from him due to his limited mobility. He had been sacked twice, lacking the ability to escape or extend the life of the play—though the offensive line was outstanding in pass protection overall.

Needing to take the lead with nine minutes left to go in the game, Rodgers took the field at Green Bay's own 20 and began executing. He went a surgical 6-of-6 for 65 yards, finding Quarless for half those completions as he marched the Packers down the field and to Dallas' 13-yard line.

1st-and-10, shotgun formation. Rodgers took the snap and, after evading the initial pressure, looked to his right to find nothing. He rolled out to his left, and in another situation, he may have kept running toward the end zone. But essentially on one leg, Rodgers instead threaded the needle between two Cowboys defenders and into the hands of tight end Richard Rodgers.

Despite his clear discomfort throughout the day, Rodgers went 24-of-35 for 316 yards, three touchdowns and zero interceptions. In fact, in the two games in which his calf injury was most a factor—against Detroit and then Dallas—Rodgers had two of the highest passer ratings on the season, 139.6 and 125.4, respectively.

The improbable touchdown to Richard Rodgers simply signified how much Aaron Rodgers stepped up this season when he was far less than 100 percent.

It wasn't the play that put the points on the board—the four-yard touchdown pass to Andrew Quarless would do that—but were it not for Rodgers' masterful fake spike one play prior, the Packers would have run out of time and lost to the Dolphins by four.

Working from the Miami 16 with less than 30 seconds left in the game, Rodgers intended to spike the ball to stop the clock. As told to ESPN.com's Rob Demovksy, Rodgers said that as he came to the line of scrimmage, he saw Dolphins cornerback Cortland Finnegan playing at least 10 yards off Adams.

Though he yelled "clock, clock"—indicating a spike—Rodgers made another hand signal, a signal he hoped the rookie Adams would pick up on, because if he didn't, the game was over. And then, instead of the spike that everyone expected, Rodgers took the snap and immediately threw it to his right—to Adams—who caught it and, crucially, took it out of bounds at the 4-yard line.

"It's one of those things that you don't really tell anybody what's going on," Rodgers told Demovsky. "You're just yelling 'clock' and signaling 'clock' and then right before I snapped it, I looked out to the right, and they were way off outside, so I just kind of faked it and moved."

So much of the play depended on Adams picking up on the signal and having the foresight to run out of bounds, so credit is owed to the rookie. But had Rodgers not noticed Finnegan's position in his pre-snap read and not concealed his intentions, the Dolphins likely would have come away with the win.

There aren't many widely held criticisms of Rodgers that he hasn't overcome, but a pervasive one is the idea that he isn't capable of leading fourth-quarter comebacks. At least in this instance, Rodgers proved he has the football IQ as well as the accuracy and the touch to pull it off in high-stakes circumstances.

2. Week 17 vs. Detroit Lions: Playing Through the Pain

Sometimes it's most obvious which player is most valuable to a team when he's not on the field.

The Packers led the Detroit Lions by a touchdown late in the first half of the season-ending matchup. Driving down the field, Rodgers wanted to make it two scores heading into the locker room.

With 2:30 left, the Packers found themselves at 1st-and-goal at Detroit's 4-yard line. Out of the shotgun, Rodgers took the snap and scrambled forward five yards, eyeing an open Cobb in the end zone.

But at the end of the scramble, throwing left across his body, Rodgers went down as the ball left his hands, clearly in excruciating pain. Cobb made the reception, but at what cost? Rodgers remained on his back, occasionally rolling over to his left side in pain, surrounded by teammates, officials and medical staff.

The Lions smelled blood in the water and quickly took advantage by scoring a touchdown with 20 seconds left in the first half. The Packers headed into halftime up by a score, but Rodgers headed into the locker room on a cart, and it was unclear whether he'd return.

Meanwhile, to open the second half, the offense looked out of sorts without him, and the Lions quickly scored again, on another strike from Matthew Stafford to Calvin Johnson.

The Packers went on to win 30-20 and clinch the NFC North title after Rodgers returned to the field early in the third quarter. But if Rodgers hadn't completed that touchdown pass to Cobb as he fell to the ground with the calf injury, who knows what the final score might have been?

Having entered the championship matchup against Seattle with a torn calf, Rodgers appeared to suffer another injury late in the third quarter on a short pass attempt to the left to Lacy.

Rodgers rolled his right ankle as he fell to the ground and was lying there for a moment before an official and Bryan Bulaga helped him to his feet.

On the next play, Rodgers was brought down hard on a sack by defensive end Cliff Avril.

Rodgers was noticeably hurting when he took the field at Green Bay's own 22 with 1:25 left in the fourth quarter and the Packers trailing by three points on their final drive of the game. Rodgers' first two attempts of the drive were completions to Nelson and Cobb, both for 15 yards.

On the third play of the drive, with 43 seconds left on the clock, Rodgers lined up in shotgun formation out of the no huddle and took the snap. At Seattle's 48-yard line, Green Bay was still out of range for the game-tying field goal.

After glancing left to find Nelson covered by Byron Maxwell, Rodgers began to move. Bulaga and T.J. Lang had opened a lane off the right edge, so Rodgers scrambled out around to his right and looked downfield in front of him to find Sherman standing between him and Davante Adams.

So Rodgers kept going, visibly limping 12 yards down the field to convert the first down, skipping toward the end when his calf appeared to give out on him.

It was just about enough to put Mason Crosby in field-goal range. Rodgers' next two passes were incompletions, and he tossed one more pass to Nelson for six yards to get Crosby within 48 yards. The field goal may not have been possible without Rodgers' scramble three plays prior.

Everyone knew Rodgers was injured heading into the game and that his mobility would thus be limited. For the most part, it was: Though Rodgers had 43 rushing attempts in 2014, and nearly three per game, he had just the one scramble against Seattle.

But on that particular play, Rodgers did what he had to.

It was likely ill-advised by his coaches; if he had seriously exacerbated his injury in the championship game, would it have even mattered if the Packers had won if he was hurt for the Super Bowl?

But it also demonstrated sheer determination to win, and it kept Green Bay alive at least until overtime. That one play—Rodgers doggedly limping and skipping down the field toward the first-down line—best exemplifies the spirit of Rodgers' MVP season.

Chiefs DT will be active today after missing the divisional round

Report: Bengals Not Trading No. 1 Pick

Report: Bengals Not Trading No. 1 Pick 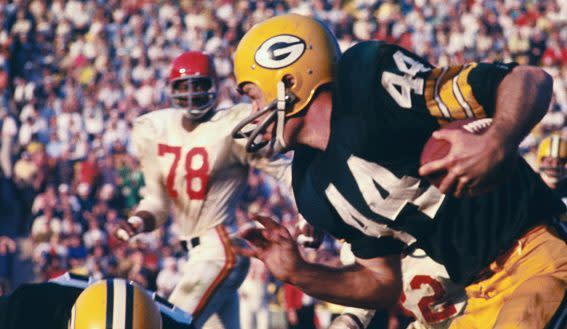