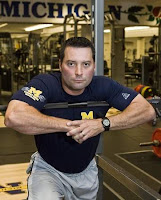 We all know that Michigan's S&C coach Mike Barwis doesn't mess around when it comes to working out.

So when Freshmen come in for the first time, it's a shock. But when you're a kicker who really hasn't worked out much, it's a real shock.

This is what Brendan Gibbons, a freshman kicker who just got on campus, had to say about Mr. Barwis:

"The workouts are real hard, I've just got to get used to it," said Gibbons, a 6-foot, 200-pounder from West Palm Beach (Fla.) Cardinal Newman. "I never worked out like this before."

Punter Zoltan Mesko has been an early mentor to Gibbons and offered him the best advice so far. "Just work hard and don't give up because if you give up, Barwis goes crazy," Gibbons recalled Mesko telling him.
Barwis works everyone hard.
Here is what Taylor Lewan, a Freshman Offensive Lineman, had to say when he got on campus a few weeks ago:
"Yesterday I had my first Barwis workout," said Lewan on Saturday afternoon. "We lifted and then we did plyos (plyometrics) and ran. During plyos, my legs were so shaky I could barely walk. My legs were cramping up and everything. It's a huge program. This is going to make us all athletes. Twice as much the athletes that we all are."
Barwis has already had an impact on future QB starter Tate Forcier. Per Coach Rod:
"Tate was so proud, he came by and saw us yesterday at a whopping 190 pounds. He came in at 175 wearing a long sleeve shirt, now he's wearing a t-shirt and eventually he'll be wearing a muscle shirt. He's had a great spring, carried it over to the summer. He and a couple of those other young guys are going to have an opportunity, so we'll see what happens."

Wolverines in the NFL: Maurice Hurst tweets that he's signed with the San Francisco 49ers

Wolverines in the NFL: Maurice Hurst tweets that he's signed with the San Francisco 49ers