While some have been critical of the amount of money Aquib Talib is receiving, Albert Breer of the NFL Network reports that the specific terms of the agreement make it a better deal then it appears on the surface:

Aqib Talib has developed into one of the best shutdown cornerbacks in football over the past couple of seasons. On Tuesday, the Denver Broncos rewarded him nicely for that transformation, signing him to a six-year, $57 million contract, according to ESPN's Adam Schefter:

Ben Volin of the the Boston Globe put into perspective how lucrative the contract is:

B/R's Matt Miller weighs in on the move:

Mike Klis of the Denver Post is reporting that before making the move, the Broncos talked to former Patriot Wes Welker about Talib:

NFL.com's Ian Rapoport provides Talib's reaction to having Welker as a teammate:

The Tampa Bay Buccaneers originally selected Talib with the No. 20 overall pick in the 2008 NFL draft, but there were plenty of question marks about how long he would last in the league. He earned a four-game suspension during the 2012 season for violating the NFL's performance-enhancing-drug policy, which ultimately led to the New England Patriots acquiring him from the Bucs.

That turned out to be a career-changing move for Talib, as he thrived under head coach Bill Belichick. The cornerback made an instant impact for the Pats in six games during the 2012 season, and he truly came into his own in 2013 with four interceptions in 13 games and a Pro Bowl nod.

Broncos quarterback Peyton Manning went on to throw for 400 yards in that game, which prompted ESPN's Trey Wingo to suggest that Talib might have been the Patriots' most important player:

While it may seem somewhat shocking to make that declaration, particularly with quarterback Tom Brady going strong, there is no question that New England's defense was totally different and far more vulnerable without Talib locking things down.

At the same time, Talib's proneness to injury initially made Patriots owner Robert Kraft reluctant to sign him to a big contract, per 98.5 The Sports Hub’s Felger and Mazz show (via Tom E. Curran of CSNNE.com):

Well we want to retain all the good players we can retain. It's not like we have unlimited funding so ... He wasn't on the field a lot of the time since he's been with us. It's a balance of us balancing all that out and what is he worth. I think he's happy here and would like to be here and we're happy with him and we'd like to have him here and now it's just about doing business.

NFL fans and talent evaluators have come to the realization that Talib is one of the best in the game, and even his peers have come to recognize his progress. Seattle Seahawks cornerback Richard Sherman is known for tooting his own horn, but he listed Talib among the best players at his position, according to Mike Petraglia of WEEI.com:

I'm sure every corner out there that's playing good football right now – the Joe Haden's, the Patrick Peterson's, the Darrelle Revis's, the Aqib Talib's, the Alterraun Verner's – feels like they're the best corner in football. In order to play this game at the highest level, that's how you've got to feel.

The NFL has become a pass-first league over the past several years, so while quarterbacks and wide receivers are more important than ever, so are cornerbacks. A corner like Talib can take away an entire half of the field in any given week, and that makes life far more difficult for opposing quarterbacks.

With that in mind, it comes as no surprise that Talib was a highly sought-after asset in free agency. The big question now relates to his ability to stay healthy throughout the life of the contract, as he has never played all 16 games in a season.

At 6'1" and 205 pounds, Talib is one of the most physical cornerbacks in football, which is the main reason why he is so effective. That physicality also leaves him susceptible to injuries, though, so he'll have to strike a balance moving forward.

Even so, an elite-level player like Talib is worth the risk, and he could ultimately prove to be the best signing of the 2014 offseason. 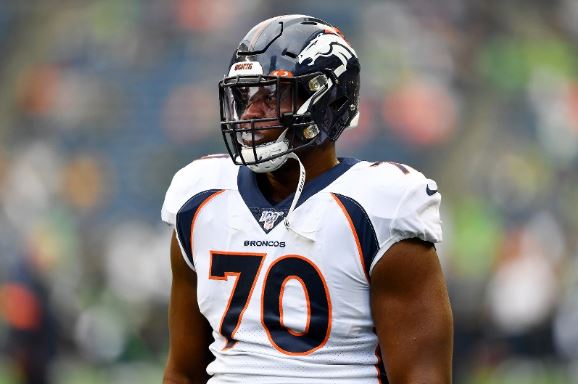