Tim Tebow to the New England Patriots.  Stunningly, the most secretive and ambiguous franchise in professional sports has willingly delved into a full-blown circus.  While Tebow does bring some positive qualities to the table, here are several factors that will hinder the polarizing quarterback from realizing on-field success in Foxboro.

The Patriots' franchise quarterback is notorious for stubbornly staying on the field even during routs.  What makes anyone think he will willingly succumb to a Tebow Wildcat package on a 3rd-and-1 in the second quarter?  Moreover, why would Bill Belichick willingly take his best player off the field for any amount of time?

Let's solely consider the on-field aspect of the Tebow acquisition.  Apparently, he will remain at quarterback for the Patriots, courtesy Gregg Rosenthal of NFL.com.  Despite constant urgings from industry experts, Tebow has resoundingly refused any positional switch.  In fact, former New York Jets' special teams coach Mike Westhoff unveiled how Tebow's obstinance handcuffed the team's plans for his usage:

"Tim Tebow, as an NFL quarterback ... he's very limited in some things," Westhoff said. "If you throw him right in the middle of a drop-back passing offense, he will look very very average at best. But if you incorporate him in different facets of your offense, I think he can be a factor. That's what I felt we were going to do, but we never did it. We could put him in for a play. I was expecting to see him line up as a ... really, to tell you the truth ... a couple roles. I'll give you example ... an H-back. A tight end. ... And then he's lined up at quarterback. That's what I was expecting to see. And we didn't do it.

"My role with him was really only to be like one percent. That's all I was thinking. Then when Eric Smith got hurt, I had to use him full-time. I didn't have anyone. I was stuck,  I lost two guys. ... Most of the stuff he did for me, he did outstanding. But it was supposed to be only a fraction, and it ended up being his only role."

Having never installed a Wildcat package before, New England has no reason to start taking Brady off the field.  While having an unquestioned leader can help diffuse controversy (as the Jets found out the hard way), it also eliminates Tebow's preferred role.

OK, let's indulge the possibility that Tebow can make the team as a backup quarterback. That would require him learning New England's notoriously complicated playbook, which relies on option reads from both the quarterback and the receivers.  This is asking a lot for someone who could not even remember plays in the huddle two seasons ago for the Denver Broncos, courtesy NESN.

Asking him to come into an offense that demands relentless precision in timing and high intelligence in reading the defense is an untenable situation to say the least.  Here are the five lowest QBR ratings amongst qualified passers in 2011, the last season Tebow started a game, courtesy ESPN.

Even Mark Sanchez of "Butt Fumble" fame ranked ahead of Tebow.  Yikes.  If Tebow floundered in a drastically simplified Broncos offensive system, there is little reason to believe he can competently run the most complicated engine in the NFL.

Even if Tebow were willing to accept a role as a blocking fullback and short-yardage back, the Patriots generally utilize Stevan Ridley in short-yardage situations.  Ridley is 23 years old and coming off a breakout campaign in which he rushed for 1,263 yards with 12 touchdowns.  In addition, they have already signed LeGarrette Blount as potential insurance to fill the power back role.

Zack Cox of NESN, among others, floated the possibility of Tebow playing tight end, but that is arguably the deepest position on the Patriots' roster—assuming Rob Gronkowski returns to health.  Unless Tebow can secretly become a Randy Moss-type deep threat, he has no role on the high-powered New England offense.

Yes, Patriots' offensive coordinator Josh McDaniels drafted Tebow in 2010 with the hopes of molding him into a viable long-term option.  Unfortunately, the Patriots already have a promising young quarterback prospect in Ryan Mallett.  If the connections aren't obvious enough, Mallett also wears Tebow's preferred No. 15 jersey.

Perhaps this is an indication that the Patriots have found a suitor for Mallett, who was widely rumored to be on the trade block prior the 2013 NFL Draft.  But that seems unlikely at this time, as teams are largely decided on their quarterback plans for next season.  Furthermore, there has not been enough time for injuries to create an opening, nor would any reasonable coach abandon a quarterback after a handful of OTAs.

Additionally, Tebow's signing was accompanied by the release of third-stringer Mike Kafka.  It would be highly impractical for the Patriots to carry only two quarterbacks into training camp.  While Tebow is no lock to make the team, it appears he is another adopted McDaniels disciple, following the true gems of Brandon Lloyd and Greg Salas in Foxboro.

So far, I have only touched upon the on-field impact of Tim Tebow.  Now that we have exhausted any viable on-field roles he could play, it is time to confront the elephant in the room.

New England's locker room is an impregnable wall of steel.  From Corey Dillon to Randy Moss to Chad Ochocinco, no one has rocked the boat and managed to stay on the roster.  Malcontents like Albert Haynesworth and Adalius Thomas were dealt with swiftly, so it seems safe to assume that Tebow will not capsize the team's 2013 campaign.

Nonetheless, Belichick is taking an unnecessary risk in seeing if his locker room can handle the relentless media circus that accompanies Tebow.  At best, he will provide a positive locker room presence while a lack of playing time eventually minimizes the media horde.  As Mike Reiss of ESPN Boston notes, Tebow could resemble Doug Flutie's 2005 campaign with the team:

When it comes to Tim Tebow's fit with the Patriots, this reminds me a little bit of Doug Flutie's signing in 2005.

Sometimes Bill Belichick sees something in a player—both on and off the field—that makes him want to have him around the team. In Flutie's case, there was great respect for his competitiveness and history in the game, and how he'd fit in the quarterbacks room with Tom Brady and rookie Matt Cassel.

But apart from an entertaining drop-kick, Flutie's lack of contributions were accompanied by a total dearth of media attention.  Tebow will not be able to fly under the radar so discretely.  With so little to gain and so much potential for distraction, why even take the chance?

*Unless otherwise stated, all stats are courtesy of pro-football-reference.com.

How Will Team Address WRs?

How Will Team Address WRs?

Amendola Weighs in on Brady’s Future 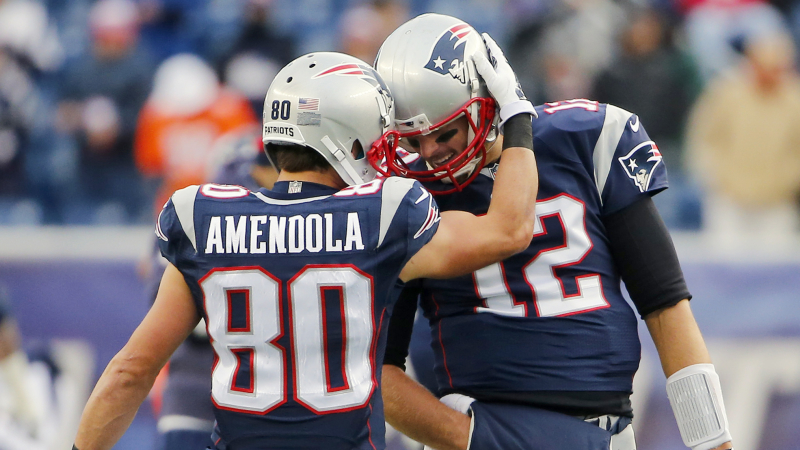 Amendola Weighs in on Brady’s Future