Had someone like Shaquille O'Neal won those titles, it wouldn't have had the same impact. MJ was a global phenomenon because he won them with grace and style.

Basketball had long been a big man's game. This was even true in Jordan's era. During the 1994-95 season that MJ missed, the top five players in PER were all frontcourt players (David Robinson, Shaquille O'Neal, Hakeem Olajuwon, Charles Barkley, Karl Malone).

Jordan and Scottie Pippen were in direct stylistic contrast to a league that was predicated on pounding down low, and the fans loved them for it.

Jordan accomplished this with superior athleticism, but also superior technique. From a standstill, he would often toy with his opponents, feinting with his pivot foot like a confident swordsman. His planted foot was attached to the floor, making it easier for him to explode away from his defender at just the right moment.

Jordan will be remembered as the man who could fly, but dunking was not his signature. No, MJ was a layup artist of the highest order, someone who could turn hang time into dazzling 360-degree floaters through traffic.

His style extended beyond the court as he became an international icon. He was so influential that his imprint remained as strong today as it ever did. According to Forbes, Michael Jordan is still earning $60 million annually off his shoe sales.

Back in the late '80s and early '90s, Nike's "Air Jordan" shoe line vaulted into an unprecedented level for a sports brand. Spike Lee directed Jordan's Nike commercials using the "It's gotta be the shoes" slogan, and the spots became era-defining.

Jordan played before Internet overanalysis, but retiring in 1993 to play baseball captivated the nation. Not only was the move bold, but it was illustrative of how much Jordan had dominated the game prior to retirement.

After three consecutive MVPs and titles (and an Olympic gold medal), Jordan could plausibly have been bored with the sport he'd conquered. There was simply nobody better, and there was no realistic challenger to Chicago's throne.

Regardless of motivation, the news was met with a funeral's solemnity (below). 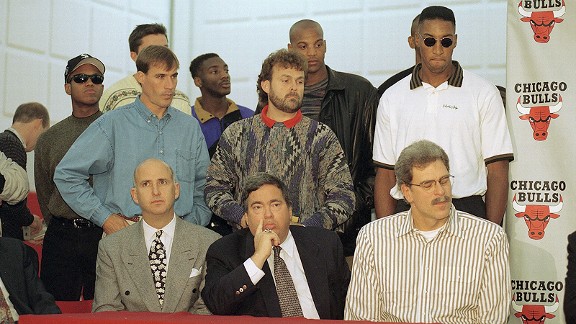 His time away from the game created something that had long been lacking in regard to MJ since Chicago's first championship in 1991: doubt. When Jordan returned in 1995, there was widespread doubt over whether he could ever be what he once was.

That doubt was initially validated when Chicago lost in the 1995 playoffs to the Orlando Magic. It was just the perfect setup for the Bulls, aided by the addition of Dennis Rodman, to next reel off a historic 72-win season and three more titles.

In his second act, Michael Jordan gave us the Madison Garden "double nickel" 55-point explosion. He also gave us "the flu game" and his championship-sealing shot over Byron Russell and the Jazz. That shot was supposed to be the punctuation mark.

It wasn't, because Jordan later returned to play with the Washington Wizards in 2001. Some bemoan this move, but he still averaged over 20 points per game in his final two seasons.

At age 50, Michael Jordan is remembered as basketball's greatest player ever. He's the man who represented a cultural shift from the '80s to the '90s, from the Cold War to globalization.