For some time there has been a rather large contingent on the internet that seems to think Ricardo Quaresma is the next incarnation of Cristiano Ronaldo. Another fast Portuguese winger with a bag of tricks who's destined to bask in the bright lights, this time with a stronger frame that prevents him from taking those unfortunate falls that seem to plague his compatriot.

I myself have been counted among the number of people who were waiting for the moment when he would get a chance to prove himself bigger and better on a world stage than his brief spell at Barcelona.

Lo and behold, after St. Jose Mourinho took over at Inter, I was treated to the prospect of seeing him play for my favorite club outside of Merseyside, and rejoiced at the opportunity. I, unlike a lot of people who praise him up and down the block, have been able to watch him play at the highest level week in and week out for my beloved Inter, and can tell you fully, and with complete honesty, of the glittering heights of talent he has reached.

He sucks. Flat out isn't fit to take to the pitch in the blue-and-black. He just cannot, for the life of himself pass the ball well, his tricks, which were the bane of so many Portuguese defenders, have been mercilessly exposed by the back lines of Italy, and his vaunted physical traits are wasted in a league where brains trump brawn because he can't play as part of a team.

He has no sense of position, his indiscipline on the pitch is sometimes unfathomable, and he generally seems like a confused man completely out of his league. Judging from his last foray into top-flight ball at Barcelona, he probably is.

One of the more shattering revelations is that his renowned tricks, the Rabona and the Trivela, are not some new shiny fullback-stunners to top the elastico. They're crutches he uses to prop up the massive shortcomings to his ability that his spells in La Liga and Serie A have confirmed to be chronic: he has one good leg.

Quaresma, it should be remembered, has a hell of a right leg. He can score some very pretty goals using it. But the fact is that he has no ability with his left, and uses a weird bag of entirely unnecessary football skills to mask it.

The Trivela, for those unaware, is the technique whereby one strikes the ball with the outside of his foot, putting a reverse bend on the ball and allowing for a right-footed shot from the right side of field to bend goalwards as if it were made with the left, or vice versa. This shot (detailed in the previous video post) looks pretty damned cool when you pull it off.

But, far more often than not, it goes wildly off the mark and leaves the team with a possession wasted and a rather embarrassing failure to convert in their minds. The Inter-Catania goal used as an example before should indicate this, as it was one-of-a-kind. Literally. That's the only goal he has scored for Inter. 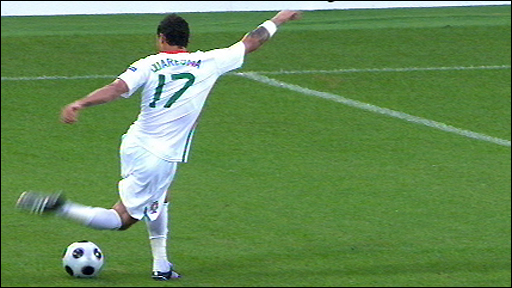 The Rabona is an even odder one. It involves the player wrapping his right (in this case) foot around the left, and taking the shot/cross/pass with the plant foot on the opposite side of the ball. See our man performing one here. Now, upon watching this, you may think "that was pretty cool," and in fact, you would be right.

The odd part is that this is not a trick, or a flashy skill. This is how he takes crosses when he plays on the left wing. All the time. Not kidding. It's the type of completely superfluous skill that might make you think he's a braggart or a showoff. While I can't speak to his personality (I have been informed by a Portuguese reader that he looked like a complete ass in an episode of Portuguese "MTV Cribs"), the actual explanation is much simpler: he just can't kick with his left foot. Both of these skills are clearly less "tricks" as just excuses for him never kicking the ball with his wrong foot. 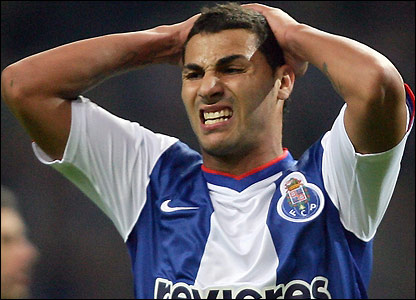 Quaresma also has zero to no self-confidence. His miserable forays into the top flight have clearly left him shaken, and the obvious disapproval the press and fans have shown for his lackluster performances have taken their toll. Mourinho himself, on the day of the loan, said quite simply "He is a player that I wanted in Milan but unfortunately, he has not been able to overcome the criticism directed at him. Without confidence in oneself it becomes more difficult."

Now all of these problems might add up to a terminally flop-prone player, but he's now been given (another) chance to prove himself in a top league, this time at Chelsea. My money is on him turning out as a Jose Mourinho in reverse. Mourinho wants to (and is well on his way to) winning all the silverware one can win in all the top leagues.

Quaresma is on his way to flopping in Spain, Italy and England. But, there is some hope for Quaresma fans out there, as if there's any league that would fit him, and any team to give him a spot in which to succeed, it's the EPL and Chelsea. A man of physical gifts, many tricks, but tactical ineptitude is built to succeed in the Barclay's RUN AROUND RUN RUN GET THE BALL SHOOT SHOOT SHOOT Premier League.

This, after all, is the league that made Cristiano Ronaldo the football politician's consensus choice for world's best footballer. If he has a chance to make something of his admittedly huge talent, it's in a league where speed and power trump skill and brains. And of course, his competition for play at Chelsea would come in the form of Florent Malouda and Salomon Kalou. In other words, he's starting every game, goofy-looking crosses and all.

There may be hope for Ricardo yet, but my money is on him doing the Veron treble across the pond as well. And on the bright side for all us Inter fans, we don't have to boo him at home matches anymore.

My cats and television screen should be much happier without the noise.

Frank Lampard names the five best players he ever played alongside

Frank Lampard names the five best players he ever played alongside

Shauryas Sharma
via We Ain't Got No History