Alan Pardew said as much when, as manager of West Ham United, Arsenal's less prodigious London rival, he had signed Benayoun from Racing de Santander in 2005.

Both parties—player and club—were all smiles when the signing was announced that summer in July.

"[Benayoun is ]a creative midfield player, who brings an educated discipline to the attack. But he's also a diligent player, who hardly misses a game and has improved year on year in La Liga," enthused Pardew.

Benayoun was 24 at the time and had enjoyed three successful seasons at Racing. Pardew was convinced that Benayoun, who, at 15, had been educated for a year at Ajax's acclaimed youth academy, would add to his discipline and diligence in West Ham's midfield flair and creativity.

"He's a player with flair, who'll be able to open the door for us when teams sit deep. We needed a player like that and at 24 he is a great signing for the club," continued the BBC Sport report referenced above.

Benayoun would spend just two successful seasons at West Ham, after which he moved to Liverpool, under controversial circumstances.

The Israeli news website ynetnews.com recorded the following on Benayoun's move from West Ham to Liverpool.

After a two-year stint as a full-fledged Hammer, Israeli soccer player Yossi Benayoun is leaving London's West Ham United for Liverpool and next season will see the 27-year-old midfielder wearing the iconic red uniform.

Sources within the club say its managers are interested in signing Benayoun for a period of 3-4 years.

Despite being offered a more lucrative contract in West Ham immediately after the current season ended ($101,000 per week), Benayoun opted for a lower-paying but more professionally-challenging position with the 2007 UEFA runner-up.

Rafael Benitiez, the then-Liverpool manager, lauded the virtues of his new signing. "He can also play in many positions, giving us a different option for the team."

Benayoun's four seasons at Liverpool were not less successful than his two seasons with the Hammers.

In his first season, for example, he scored 11 goals in 47 appearances. In the second and third he scored nine goals apiece in 42 and 45 appearances respectively.

When he left Liverpool in 2010, he had made 11 appearances for the Reds and had score a single goal that year.

Arsenal fans will best remember Benayoun's four-year stint at Liverpool for the brace he scored against Arsenal to deny them a victory that looked all but assured in the two club's Premier League encounter on April 21, 2009, a match Gooners will also remember for Andre Arshavin's four-goal heroics.

In a game that seesawed between the two teams, Arshavin appeared to have secured victory for the Gunners in stoppage time, but as the Jerusalem Post described it, Benayoun scored a stoppage-time goal of his own when he "[lept] in and [volleyed] home the equalizer two minutes later."

Benayoun in action against Arsenal in the thrilling four-all match in 2009. Laurence Griffiths/Getty Images.

Phil McNulty struck all the right notes in his report of the match. I'd encourage readers who want to reminisce on the match to read his report here.

From Liverpool, Benayoun—who, as a nine-year-old had had to hitchhike 60 kilometers round trip to training and games at Hapoel Beer-Sheva FC with his father, after the club's scout had spotted the talented lad—moved to Chelsea FC.

Here's the story, as reported by The Independent and in Benayoun's own words:

With his father, Benayoun, always a slight, almost fragile figure, hitch-hiked to the training grounds of Hapoel Be'er Sheva, the only senior team in the Negev desert. The Negev is an extraordinary place. Desperate. 'It's a normal life like anybody. My family still live there, in the desert,' Benayoun protests before adding 'It's a different life from England but it's my home. It's one of the smallest and poorest cities in Israel.'

It is understood one of new Reds boss Roy Hodgson's first acts in his new role was to rubber stamp the winger's departure.

The Israeli is expected to commit to a four-year contract at Stamford Bridge.

Meanwhile, The Independent reports that Benayoun will earn around £55,000 a week with the Blues.

An Achilles injury, coupled with the change of management, would hamper Benayoun from being successful at Chelsea. When therefore Arsenal came calling on transfer dateline last August, Benayoun didn't hesitate.

I was negotiating with three teams but as soon as I heard Arsenal were in, I knew it was a big chance for me. I knew that with [André] Villas-Boas, I would not get enough credit [at Chelsea]. I have not played as much as I want but it is great to be at a club like Arsenal.

As hinted in his comments above, Benayoun's playing opportunities at Arsenal have been few and far between, that is, as far as starts are concerned.

This isn't surprising though, were one to understand Benayoun's role this season as best defined in terms of an impact fringe player than of a central, inevitable one.

Seen in this light, the following table, which takes a census of Benayoun's appearances for Arsenal acquires proper focus, even if albeit his substitute appearances have been seldom of impact nature. 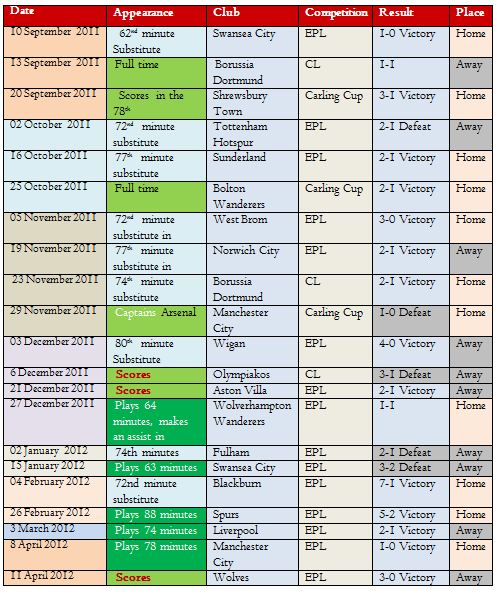 For Benayoun, though, who took a significant pay cut to move from West Ham to Liverpool, impact and substitute appearances aren't enough or satisfactory. It is why he spoke in early March about moving both from Arsenal and Chelsea to maximize his playing opportunity elsewhere.

My inclination at the moment is to sign for a mid-table team and play another two or three years. The bottom line is that I’m not playing enough games. I haven’t been given enough opportunities. I scored the winner at Aston Villa and made a goal in the next game, but for some reason I have not been given a chance to play since then. I still believe in myself though and I believe that I will get more opportunities to play Premier League football in the future.

And in the Guardian article referenced above, Benayoun has reiterated the sentiment.

It has been up and down this season for me. I try to be focused and concentrated but it's not easy. I was waiting all the time for my chance. A few times, I got my chance and then I didn't get another for a long time. But in big clubs, you have to be patient. Of course, it's hard to find rhythm. For every player, it's not easy. You want to play a run of games but, like I said, it is a big club.

On this evident therefore, it isn't clear whether or not Benayoun would want to stay at Arsenal under the present condition.

In any case, Arsene Wenger himself hasn't made a decision on whether or not to extend Benayoun's loan term for another year or sign him permanently.

Asked about his decision on this by Arsenal Player, Wenger responded:

No, not yet [I have not made a decision]. That will happen at the end of the season. We have to look at the situation in a global way because we have many players out on loan so we need to deal with these situations.

Although the "global" situation is still unclear in Wenger's mind, what isn't so is his admiration for Benayoun.

First of all he knows the job in this [wide] position. He is highly focused in the big games, that is a massive part, because you cannot switch off.

Arsenal fans have responded well to Benayoun. They've warmly applauded his effort in the league matches against Spurs and Manchester City at the Emirates.

The player's performance at Arsenal has been excellent in general, with the only poor performance being the away defeat to Swansea City where he ineffectively deputized for the injured Mikel Arteta.

But even here, hardly anyone could fault his commitment and tenacity.

To return to the question in the heading, then, here's what I think.

Arsene Wenger should retain Benayoun and make him both captain and focal point of the Arsenal FA and Carling Cup team, with the understanding that he'd still have the opportunity to rotate with the players with whom he has competed for starting position in the first XI this season.

In other words, his fundamental role in the first XI would remain the same, plus the added responsibility of leading Arsenal's charge in the domestic cup competitions.

I believe—perhaps naively—that if Arsenal are able to keep a consistent lineup in the cup competitions, comprising of players such as Benayoun, Nicklas Bendtner (or Marouane Chamakh), Park Chu-Young, Emmanuel Frimpong, Francis Coquelin, Ryo Miyaichi, Ignasi Miguel, etc, in the event some of these players are not sold, there's no reason why Arsenal couldn't compete favorably in the early goings of these competitions.

Like Benayoun, these players could of course rotate in and out of the first XI.

I suppose that, were Wenger to sit Benayoun down and sketch for him such a role in the coming season, a season which Arsenal must strive seriously to win one or two of the competitions the club will participate in, Benayoun might decide to stay.

But as Wenger explains, all depends on the global picture of what Arsenal really needs to succeed in the coming season. Should the club decide to bring back some of her loanees, there might not be place—wages wise—for Benayoun.

On the other hand, the experience and maturity of Benayoun are sure to come in handy in some of these tricky cup matches, and even in the Premier League. Mikel Arteta's impact at Arsenal this season is a solid argument for this notion.

Therefore, I'd rather Arsenal retained Benayoun and sent some of the youngsters on loan to free up the money Arsenal would need to keep the Israeli international.

What do you think, do you suppose Benayoun has a place at Arsenal in the coming season, or not at all?

Should he be retained or let go, so Arsenal could give the resultant space to one of its up-and-coming youngsters or so it could buy some other option for the space?