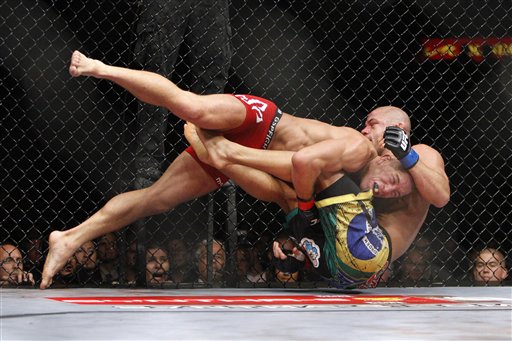 When Georges St. Pierre battles Jake Shields for the UFC welterweight title this weekend at UFC 129, it will likely be the biggest and toughest test of his career. It will bring new questions as to what St. Pierre's approach will be to facing a grappler that is better than him when it comes to submissions.

Will he still go for takedowns at the risk of getting caught in a submission? Will Shields be able to take him down?

These questions and more will be answered from one of the very best takedown artists in the sport today. His ability to set up takedowns with strikes will leave no openings to get caught, and this is what makes him one of the top 10 fighters with the best takedowns. 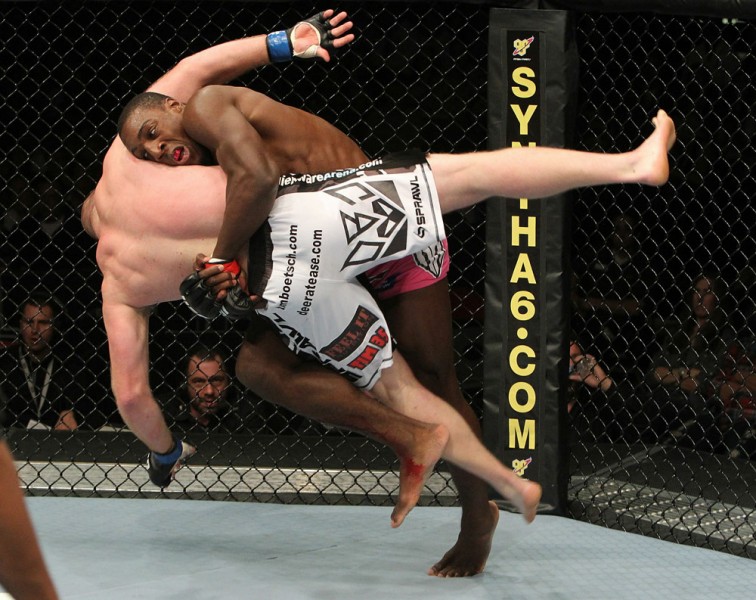 Davis was a NCAA Division 1 wrestler at Penn State University and took his strength and technical skills into mixed-martial-arts where he won nine bouts in a row. He also won the No Gi Grappling World Jiu-Jitsu championship as a blue belt.

In his bouts with Stann and Nogueira, Davis used his wrestling to dominate the two light-heavyweight fighters over three rounds. He showed off how he can adapt to his opponent in the Nogueira bout, switching from double leg to single leg midway through the fight.

He is currently undefeated and scheduled to face Rashad Evans at UFC 133. If he wants to test out his takedowns or takedown defense, it doesn't get too much harder than what will be in front of him that night. 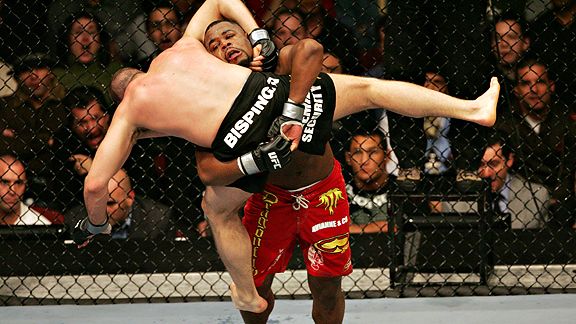 Rashad Evans has won the majority of his bouts with wrestling alone. He was a NCAA Division 1 wrestler at Michigan State University.

The Ultimate Fighter 3 winner was known for his powerful wrestling base, and he displayed this on the show beating Keith Jardine and then Brad Imes in the Ultimate Finale. He took it and evolved into one of the more well-rounded fighters in the sport.

Evans utilized his takedowns to defeat Thiago Silva and Quinton "Rampage" Jackson as well as Forrest Griffin to obtain the UFC light-heavyweight championship.

Coming down from heavyweight, Evans has the kind of grip that lets him take the smaller fighters to the ground almost at will. 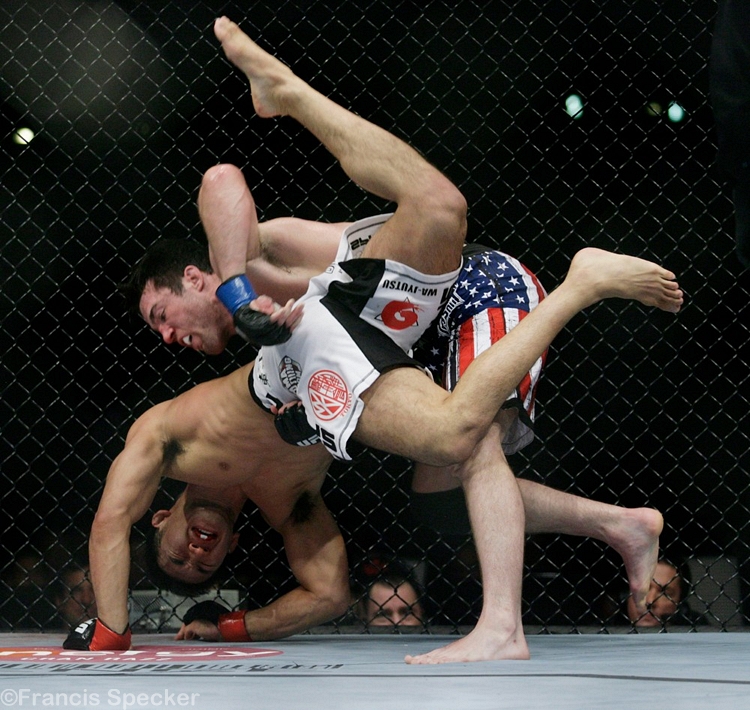 Middleweight title challenger Chael Sonnen is one of the toughest, grittiest and most entertaining fighters out there. He is also an extremely proficient fighter when it comes to wrestling and securing takedowns.

It was his takedowns that won him two elimination title bouts versus Yushin Okami and Nate Marquardt. Sonnen used his striking to set up the shot for a takedown. He got almost everyone, and that would establish a pace that would wear both contenders down. It did just that, and he won a decision in both.

In his most recent bout versus Anderson Silva, the 34-year-old took the pound-for-pound king down at will and make it look easy. Unfortunately, he got submitted with a minute in the fight. If they ever fight again, expect to see much more of the same.

No. 7 Tie Between Gray Maynard and Frankie Edgar 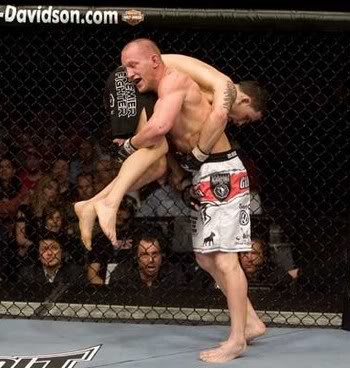 Since their second fight ended in a draw, so does determining who has the better takedowns.

The first bout was all Maynard as he got takedowns at will and took the smaller opponent down to win a three-round decision.

The second bout was totally different with Maynard getting the better of the striking and Edgar getting the takedowns. Maynard spent too much energy trying to put Edgar away early that he had nothing left to defend the takedowns and slams of Edgar. The fight resulted in a draw with Edgar retaining the title. 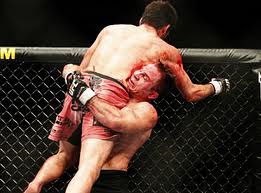 Fans don't see it that often anymore, but former UFC lightweight champion Sean Sherk has some of the best takedowns and slams in MMA.

Everyone forgets what Sherk did to Kenny Florian and Hermes Franca, but if you love takedowns, go watch those two fights. He took them down at will, and in the Florian fight, picked him up over his head and slammed him several times to the canvas. It was the ferocity of Sherk that made them so memorable. He looked like a man possessed.

The 37-year-old may not have too much time left in this sport, but he is expected to return sometime during the summer. Hopefully, he gets back to his wrestling roots so fans can see what made this guy so effective and exciting as a champion. 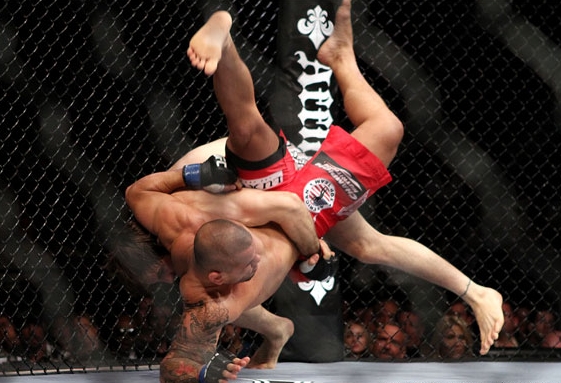 Like Sonnen, welterweight contender Jon Fitch loves to use his wrestling to break down opponents. He likes to get close and take his opponents down as soon as possible. He has done this to the likes of B.J. Penn, Thiago Alves, Ben Saunders, Paulo Thiago and many others.

Criticized for his lack of action, Fitch is often called one of the more "boring" fighters in the sport. Fans want to see a finish, and they haven't seen one from him since 2007.

What he does have though are some very effective takedowns. As long as Fitch remains to have some of the very best in MMA, don't expect anything different until he fights Georges St. Pierre again. 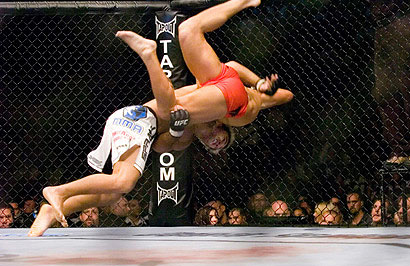 UFC welterweight challenger Josh Koscheck is a former collegiate wrestling champion, and he proves just how good he is every time he fights. He has used his takedowns to get dangerous strikers Paul Daley and Anthony Johnson to the ground before winning both bouts.

What makes Koscheck so impressive as a fighter was his ability to adapt into MMA with a wrestling base exclusively.

With relentless shots and a powerful wrestling base, Koscheck is able to utilize his relentless takedowns against some of the very best opponents, including Georges St. Pierre. 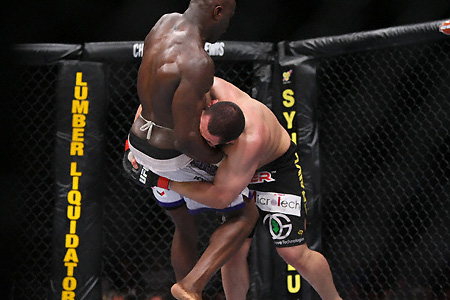 There aren't too many fighters that are going to be able to take down former UFC heavyweight champion Brock Lesnar.

Cain Velasquez did this, and he weighed in almost 30 pounds less than his opponent.

The current heavyweight champion also showcased his takedowns in the Cheick Kongo fight. After badly being hurt twice during the three-round bout, Velasquez got several takedowns at will, including one by picking Kongo up over his head and slamming him to the canvas.

Besides being great at getting the takedown, Velasquez is also a finisher. He has stopped eight of his nine opponents and is undefeated. 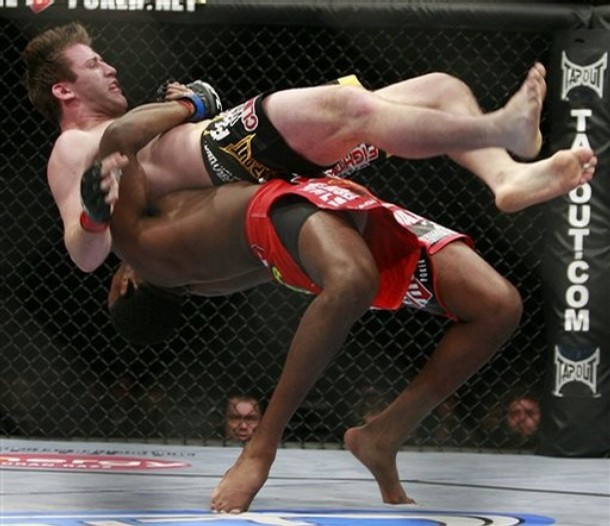 Current UFC light-heavyweight champion Jon Jones has the most wild and spectacular takedowns in MMA. His unorthodox style combined with his Greco-Roman wrestling background makes for an intriguing fighter and wrestler.

Jones is one of those guys who makes every aspect of MMA fun to watch, including wrestling. Whether he is striking, grappling or wrestling, he makes it look fun and easy but also fascinating to the viewers who prefer toe-to-toe action.

It will be a while before we see Jones in the Octagon again. He was scheduled to face former teammate Rashad Evans but pulled out after having to get surgery on his right hand. 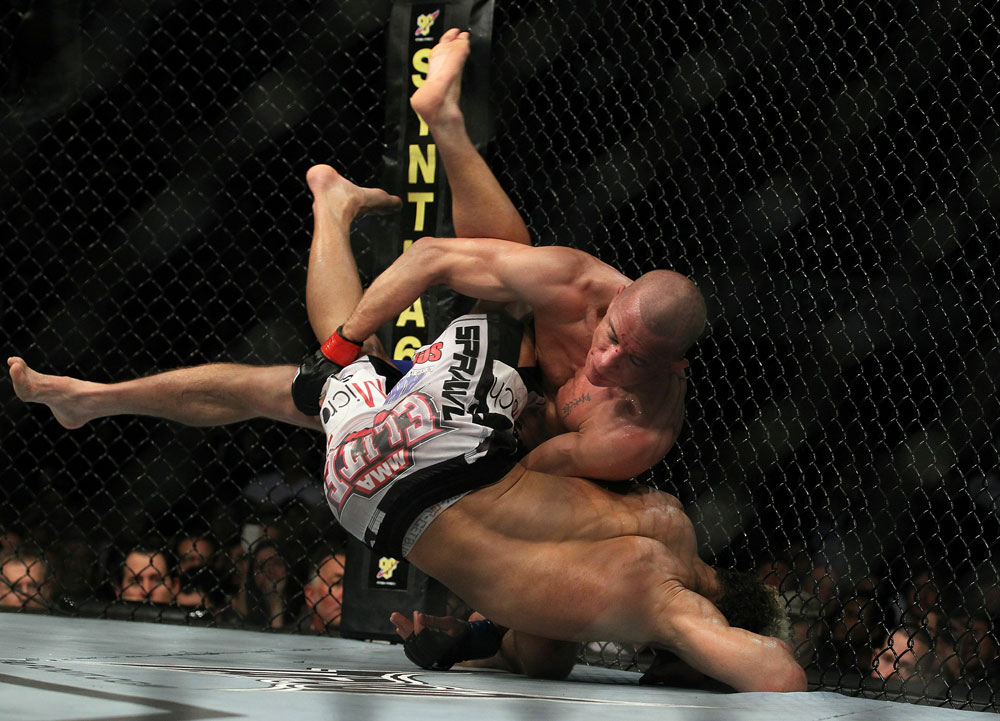 Despite not having any background whatsoever in wrestling, St. Pierre emerged to build his legacy as one of the greatest fighters ever and as one of the most dominant wrestlers in MMA. He does everything perfect, and this makes him stand out above all the rest.

He is fluid with his punches and his shots and executes the takedowns how they were meant to be done in mixed-martial-arts.

The 29-year-old Canadian has also expressed interest in competing at the 2012 Olympic Games as a wrestler. That would be interesting.