NASCAR: 15 Things That Could Help the Sport Right Now

The racing and competition on the Sprint Cup level has been fun to watch throughout the 2011 season, with first-time winners like Trevor Bayne and old favorites like Jeff Gordon and Matt Kenseth returning to Victory Lane after lengthy slumps. Even a relatively uninteresting two-car tandem draft edition of the April Talladega race will be remembered for a wild four-car photo finish.

Meanwhile, it appears as if a rule change preventing Cup drivers from earning points in the Nationwide Series hasn't had its intended effect. Justin Allgaier and Ricky Stenhouse Jr.'s tie atop the points standings has been completely overshadowed by Cup drivers such as Carl Edwards and Kyle Busch winning the actual races and getting the actual glory.

Tracks are also feeling the pinch of empty stands and falling ratings which, while not as steep as years past, are starting to become a trend this season.

What could be done to help the sport right now, in both the short and long run? Here are 15 of my suggestions. 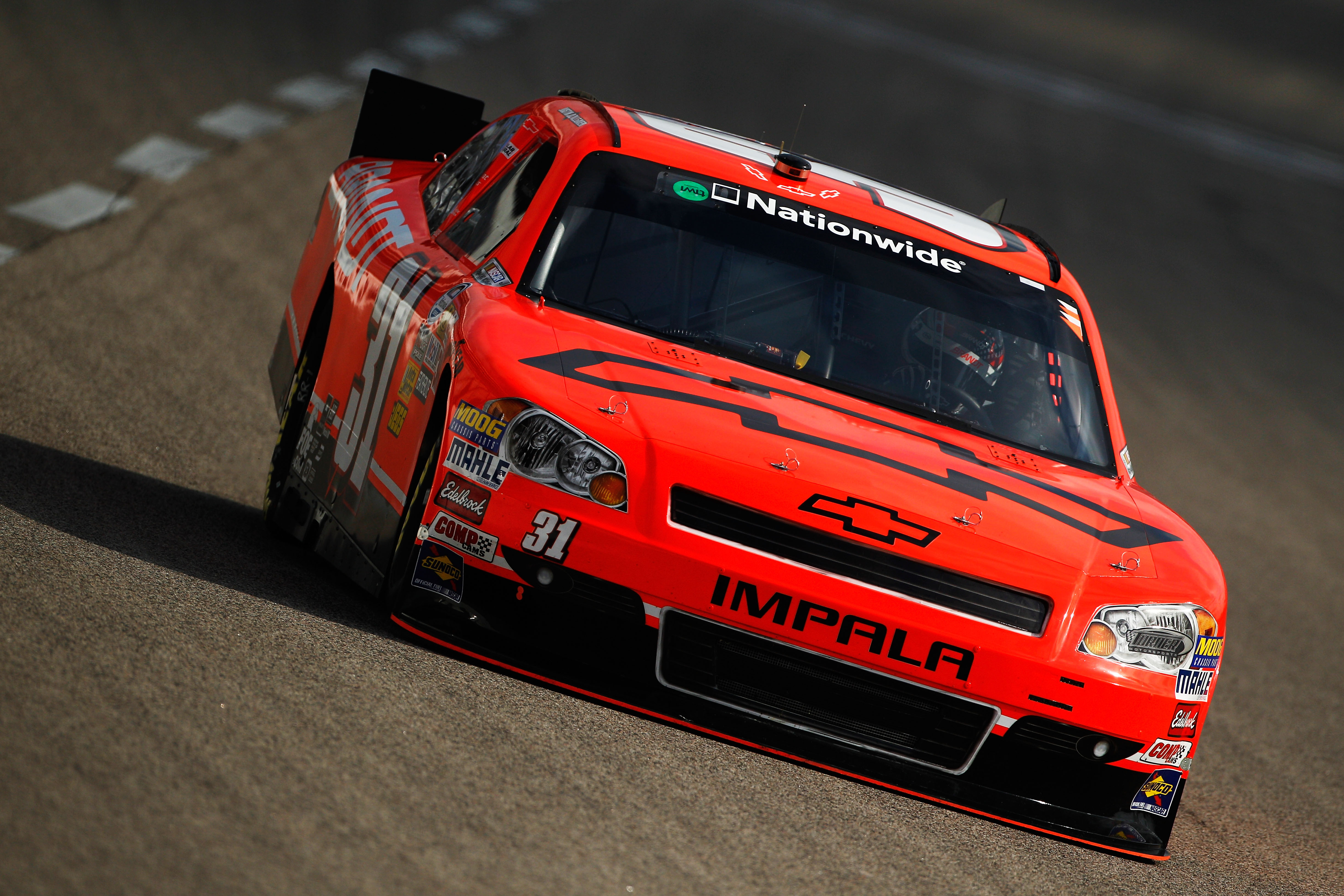 I won't go into great detail on this, as fellow Bleacher Report writer Paul Carreau hit the nail right on the head in this article last week.

Cup drivers have won each of the eight races this season, putting the actual points race on the back burner. The Nationwide Series points race is seemingly rarely mentioned and ignored by ESPN during race telecasts, as those who want to know who is leading points (as for now, it's Justin Allgaier and Ricky Stenhouse Jr.) have to rely on Jayski.com after the race.

The series formerly known for cultivating young talent has essentially become an exhibition series for Cup drivers and teams to fatten their wallets a day before earning actual points.

Of course, the first step towards making the Nationwide Series seem important is ...

Finding a Television Partner That Cares About the Nationwide Series

When it was announced that ESPN/ABC would be the exclusive television home of the Nationwide Series starting with the 2007 season, it appeared as if the conglomerate was excited about airing races for the first time since a Camping World Truck slate in 2002.

A memorable ad campaign featured young racers in driving school, with commercials such as the one attached to this slide (Remember Stephen Leicht, Todd Kluever and Brad Coleman?).

However, ESPN/ABC have made it perfectly clear that the Nationwide Series is worthless in their eyes. In years past, races have aired with little pre-race or post-race coverage for live events, and programming issues have bumped races onto ESPN Classic and SPEED (a Fox-owned network).

Cup drivers are almost the sole focus of each broadcast, as Marty Reid enjoys gushing over Kyle Busch's success in the Nationwide level at every single opportunity. The actual Nationwide points race is ignored.

Thus, it would do NASCAR a lot of good to announce that the Nationwide Series would be in search of a new television home in the next contract.

One thing needs to be made very clear: The Nationwide Series is not the Sprint Cup Series, no matter how many times you wish it could be.

Bringing Back a NASCAR-Based Reality Show

There's plenty of great stories to be told on a weekly basis on the Sprint Cup, Nationwide and Camping World Truck levels.

Instead of being fodder for pit reporters during the race, NASCAR should allow film crews to create another reality show on the life of drivers on and off the track.

In years past, SPEED's "NBS 24/7," FX's "NASCAR Drivers 360," and ABC's "NASCAR in Primetime" have offered insights into drivers and teams that on-track coverage simply cannot do. 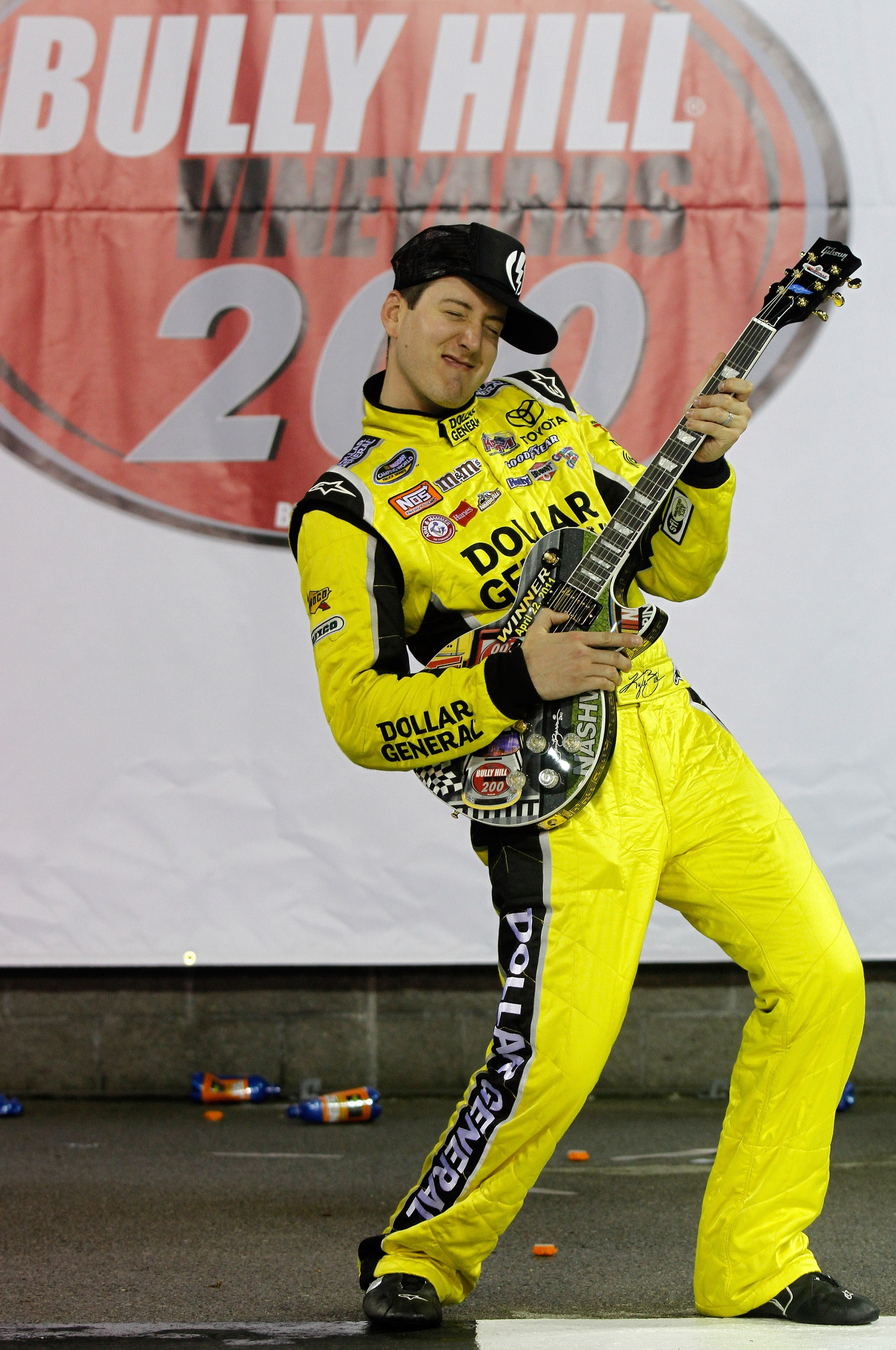 Thus far, the only non-Cup driver to win on either the Nationwide or Camping World Truck levels this season is Johnny Sauter, who made a late-race pass to win the Truck race at Martinsville earlier this month.

With the points systems now prohibiting Cup domination in the standings, it's time for NASCAR to get serious and prohibit Cup domination on race day.

Limit each Cup driver to 15 or so races outside of the premier series every year. That way, drivers like Kyle Busch can still visit Victory Lane without spoiling it for the little guys. 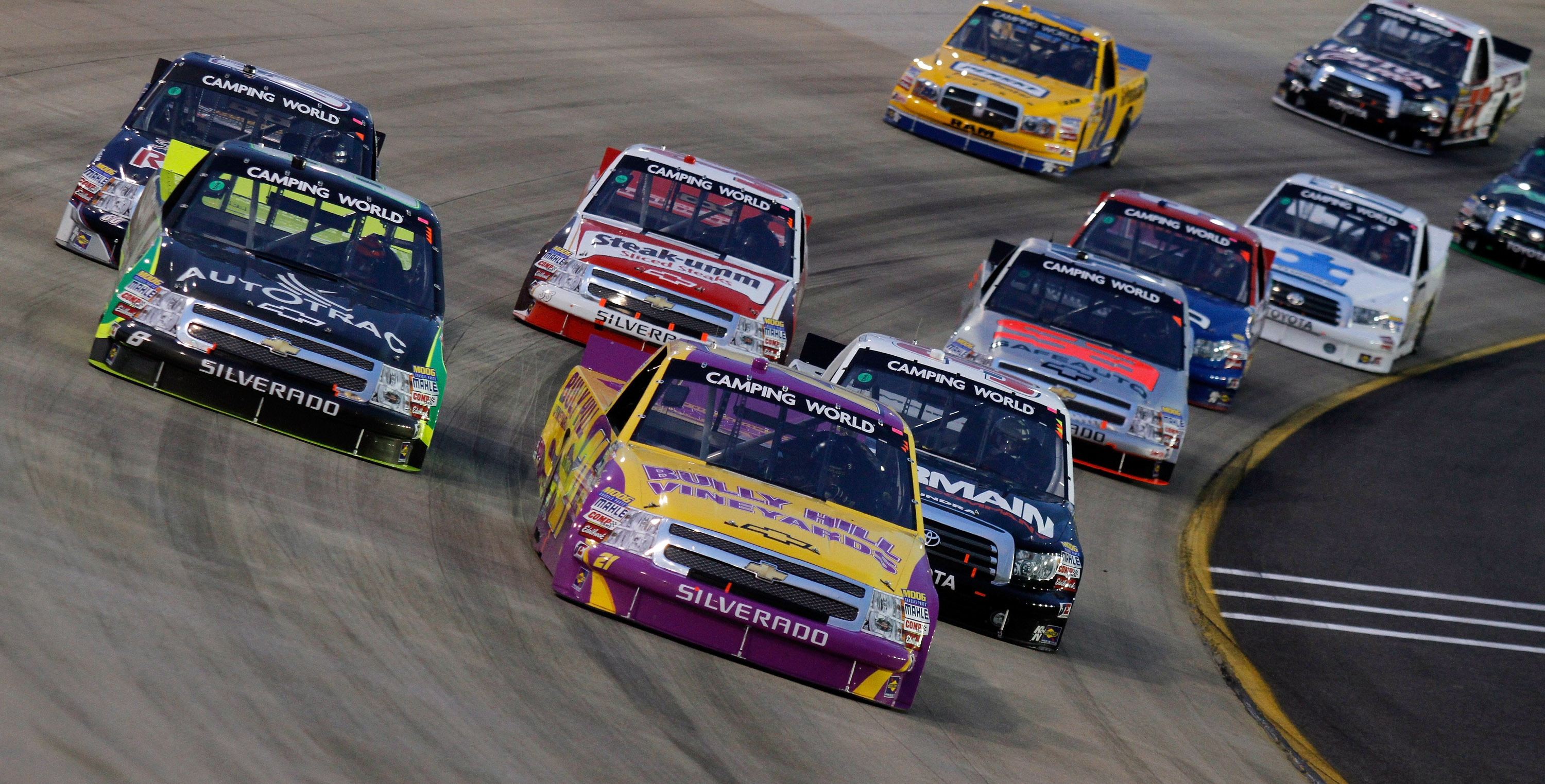 The Camping World Truck Series is a curious case in today's NASCAR world.

A pleasant mix of young guns and wily veterans, the series is known for "tough trucks, tough racing."

However, the marketing and promotion of the series seems to mostly come from SPEED/Fox more than NASCAR itself. ESPN refuses to promote when the next race is during NASCAR Now, but SPEED has given the series a unique television presentation since picking up exclusive rights to the series from the "Worldwide Leader" in 2003.

Today's casual racing fan may not be familiar with Cole Whitt, Austin Dillion or Nelson Piquet -- three drivers who will certainly battle for Sprint Cup titles later in their careers.

Not only that, the Jack Sprague-Ron Hornaday rivalry from the late 1990s, one that took the series from its notorious halftime breaks to a legitimate racing tour, has all but disappeared from NASCAR lore, even though Hornaday is still a title contender in the series.

Come to think of it, the Camping World Truck Series would be a perfect place to launch a NASCAR-based reality show (as outlined in the third slide).

Making the Track Seem Full, Even If It Is Far from a Sellout 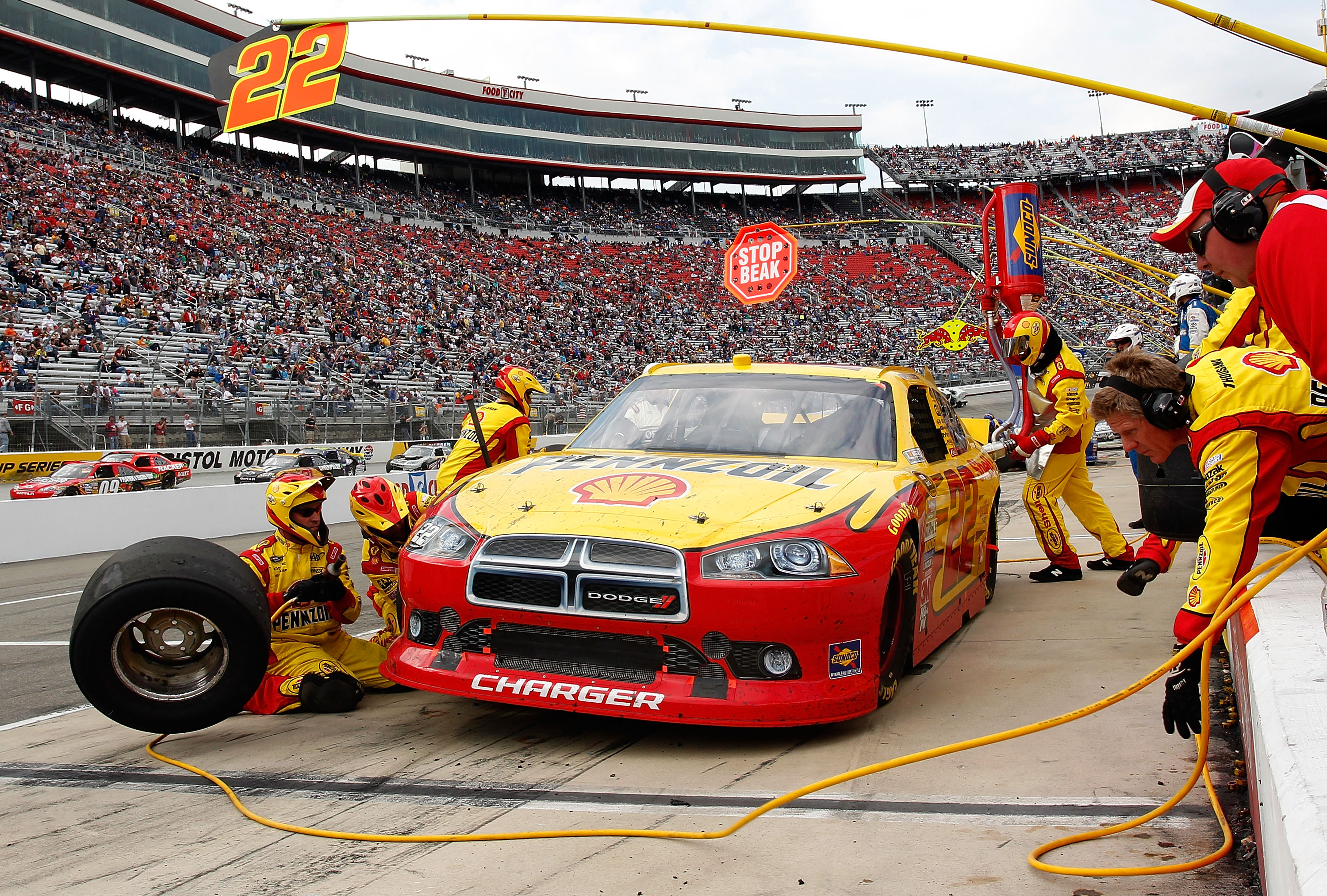 There's only so much repetitive print, online and television advertisements can do anymore when it comes to selling fans on coming to the races each week.

Tracks like Bristol Motor Speedway have experienced poor attendance in 2011, and it does not look good on television. If fans aren't at the track, why should viewers at home be interested?

Give tickets away or place sponsored tarps over empty seats if you have to, but television and radio should still talk about the situation on air.

(For further information, search "NASCAR empty seats" on Google. There's plenty of links to articles that explain the lack of attendance better than I can.)

For those of you that may not have heard, Walmart struck a merchandising deal with NASCAR prior to the 2011 season, becoming an "official sponsor" of the sport.

One of the focal points of the deal can be found on www.walmart.com/nascar, as the big box store is offering a four ticket, four hot dog, four drink, one program offer for $99 available at selected tracks.

That's roughly $25 per person, a heck of a deal that should be publicized more often than it is. 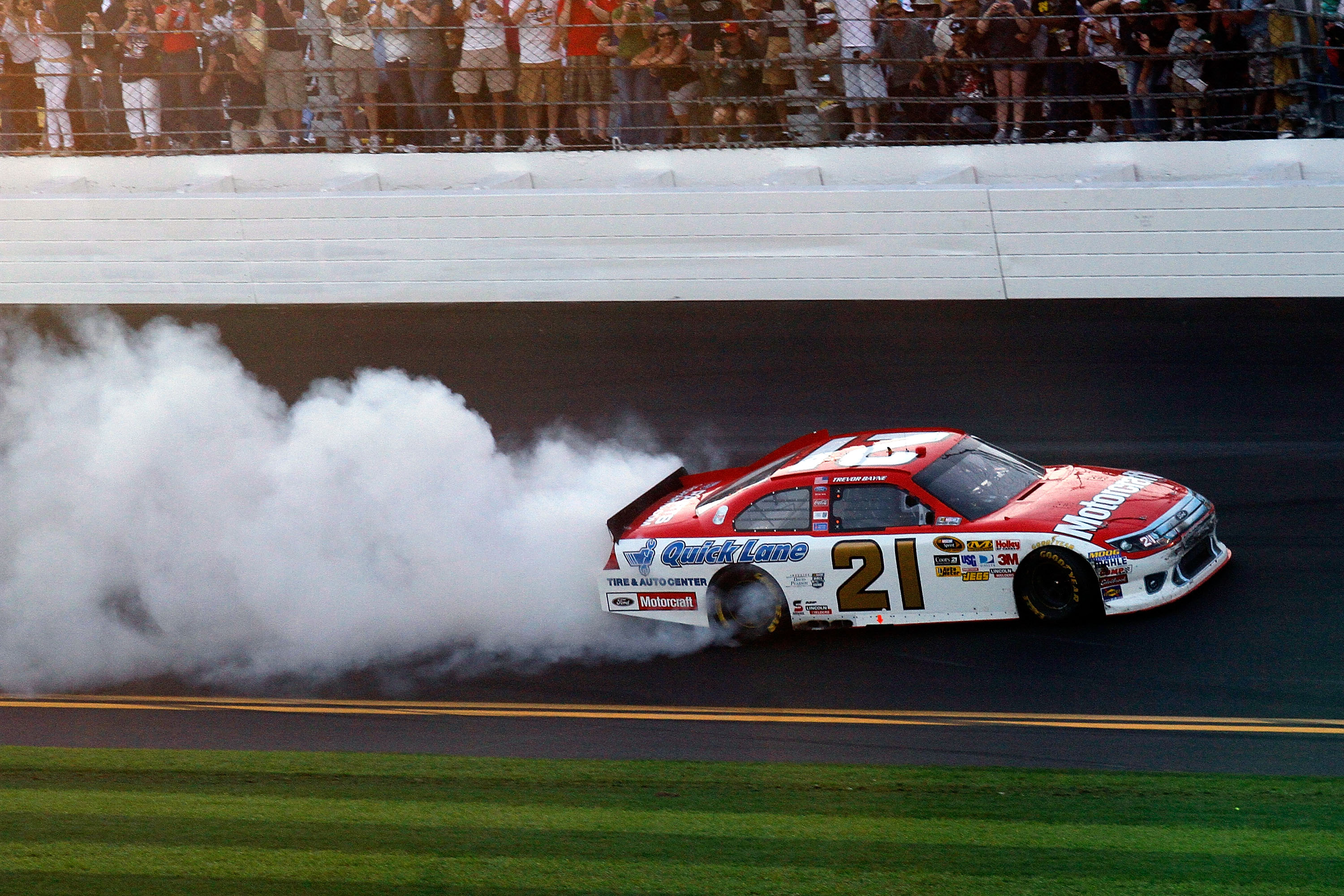 While NASCAR does have the recently built Hall of Fame, there's no real attempt by the sport to market itself as something that has lasted over 60 years with so much tradition.

For example, take the Daytona 500: 20-year-old Trevor Bayne seemingly completely overshadowed the fact he drove the iconic No. 21 Ford for the Wood Brothers, one of the longest tenured teams in the sport.

One could argue that NASCAR let a prime opportunity slip away during the NFL lockout. NASCAR could have mentioned that they haven't stopped once for over six decades and used it as a focal point for an ad campaign. 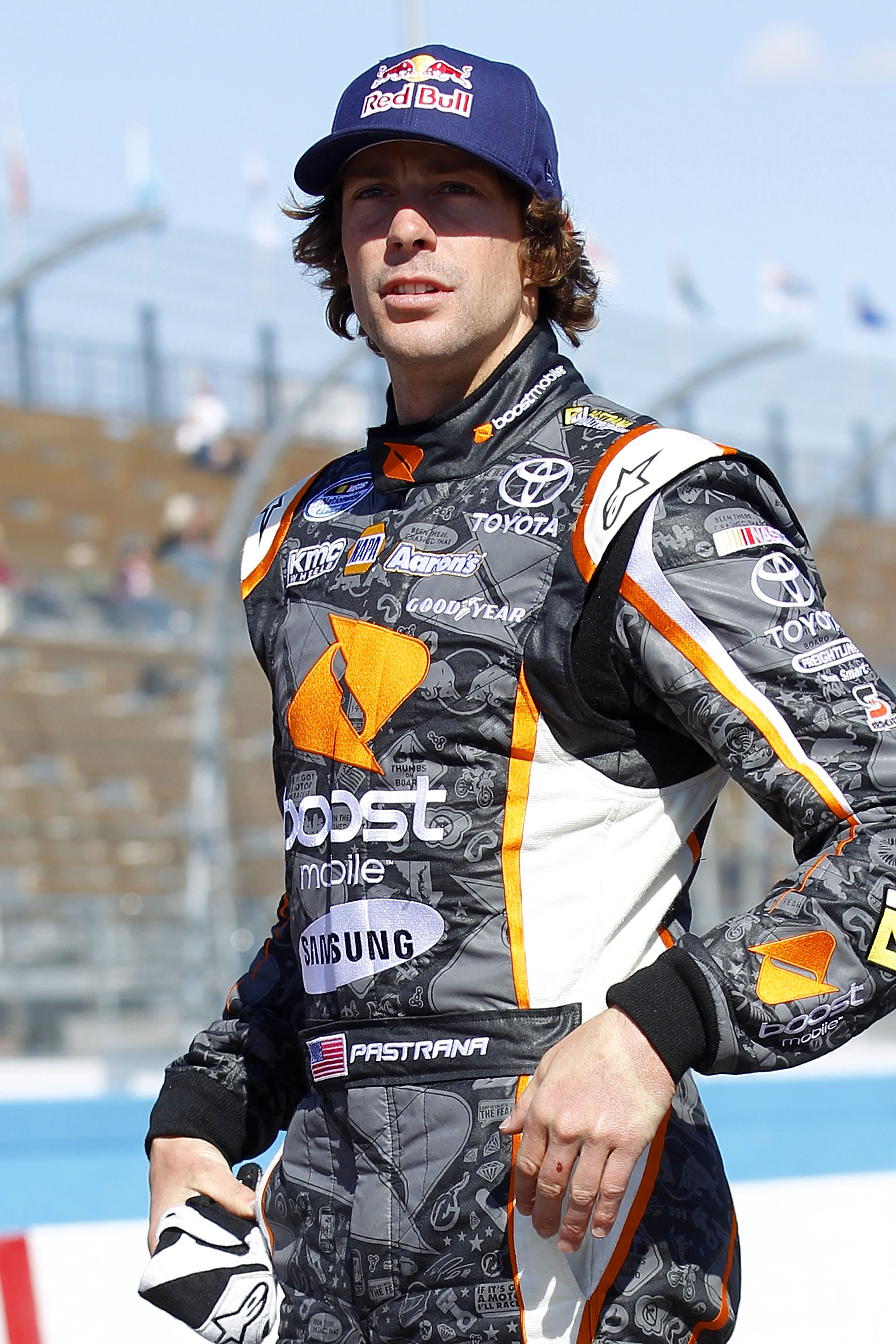 Action-sports legend Travis Pastrana will make his Nationwide Series debut in the No. 99 Toyota for Pastrana-Waltrip Racing at Lucas Oil Raceway in Indianapolis this July.

The lack of hype surrounding a name well-known in the mainstream due to his X Games exploits and MTV's "Nitro Circus" has been startling.

NASCAR has a great opportunity to bring fans into the sport that would not usually watch a race on Saturday night, and they don't need to feature Pastrana yet to do that.

Instead of claiming that "everything else is just a game," advertise the risks that drivers and crews have to face and relate it to action sports culture. This would be an image change that would not hurt the sport one bit.

At the very least, it's better than a commercial featuring a guy installing a massive stereo in his house. 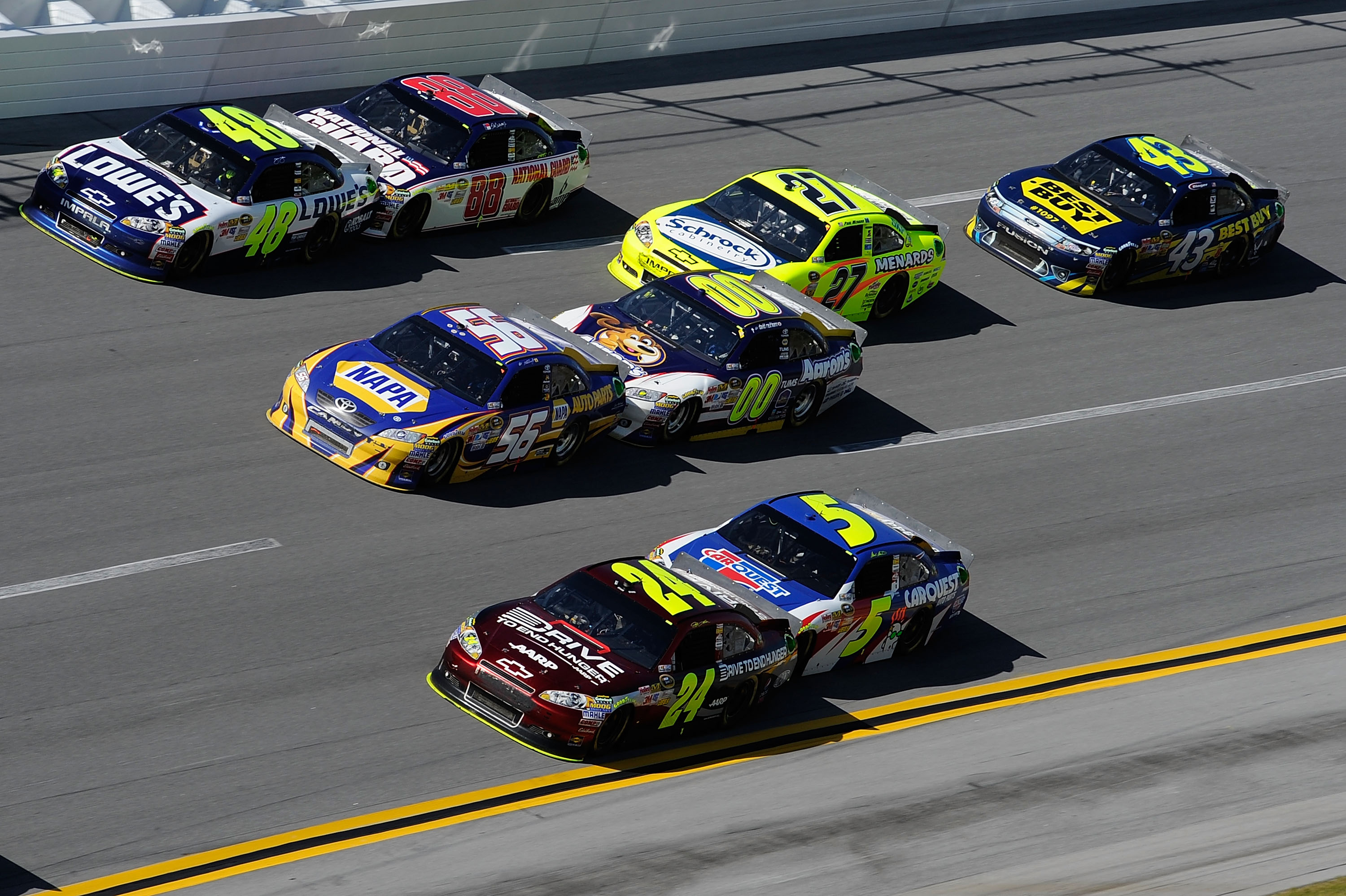 While the current aero package allowed for a fun Daytona 500 with a shocking winner in Trevor Bayne, the visual of cars surging through small packs wasn't quite as thrilling at Talladega.

If it wasn't for a wild four-car photo finish which saw Jimmie Johnson victorious earlier this month, fans would talk about how the race was marred by boring tactics.

There's something about driving in huge packs that is almost iconic at tracks like Talladega, with "The Big One" being such a, well, big part of the sport.

Bringing Additional Dates Back to Darlington, Atlanta for 2012 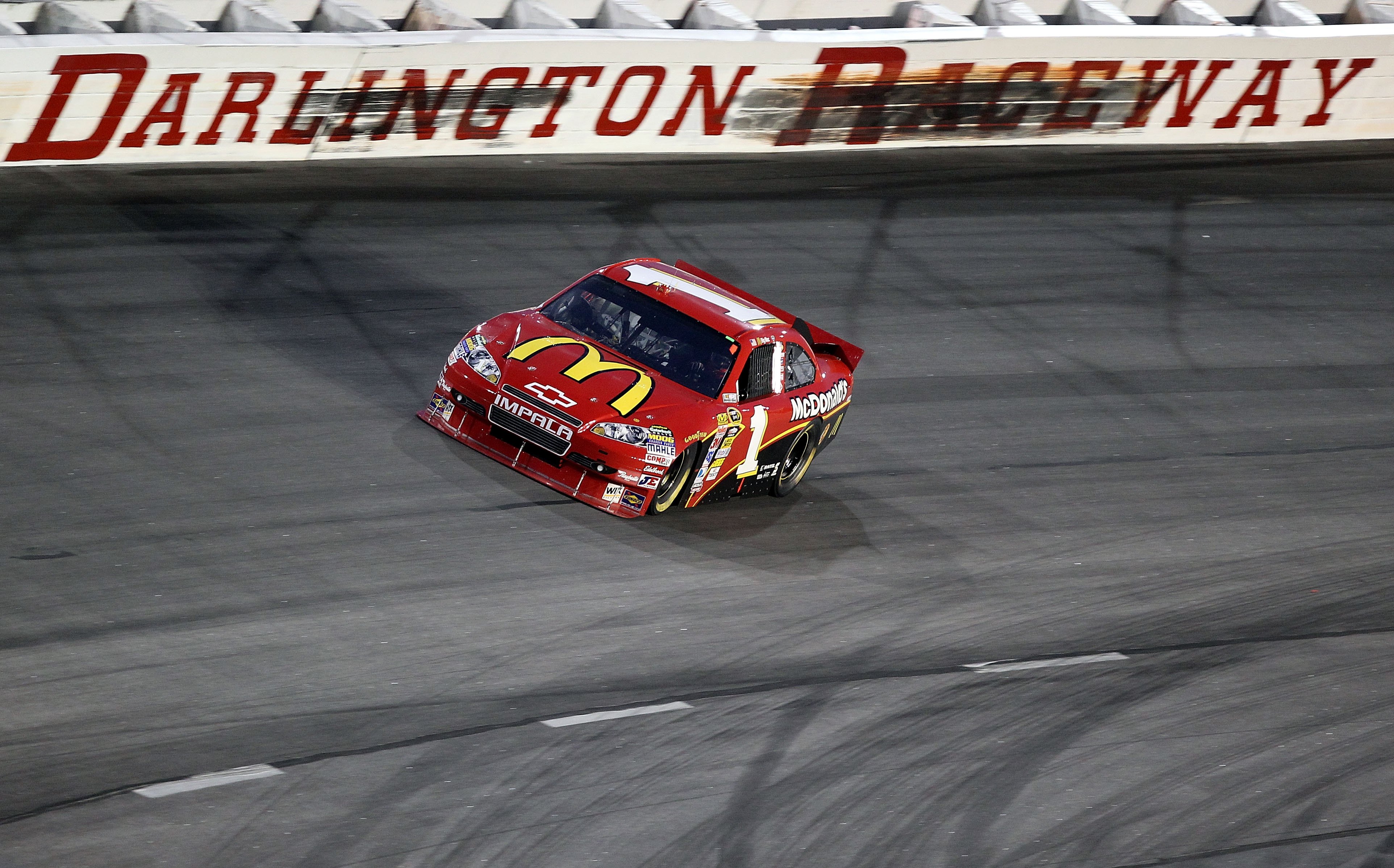 Darlington Raceway and Atlanta Motor Speedway are often viewed as two of the most thrilling tracks on the Sprint Cup circuit, steeped in tradition and classic races.

It's unfair that both tracks are stuck with one race per season, as the attempt to move into bigger markets has certainly failed to pan out the way NASCAR expected it to. 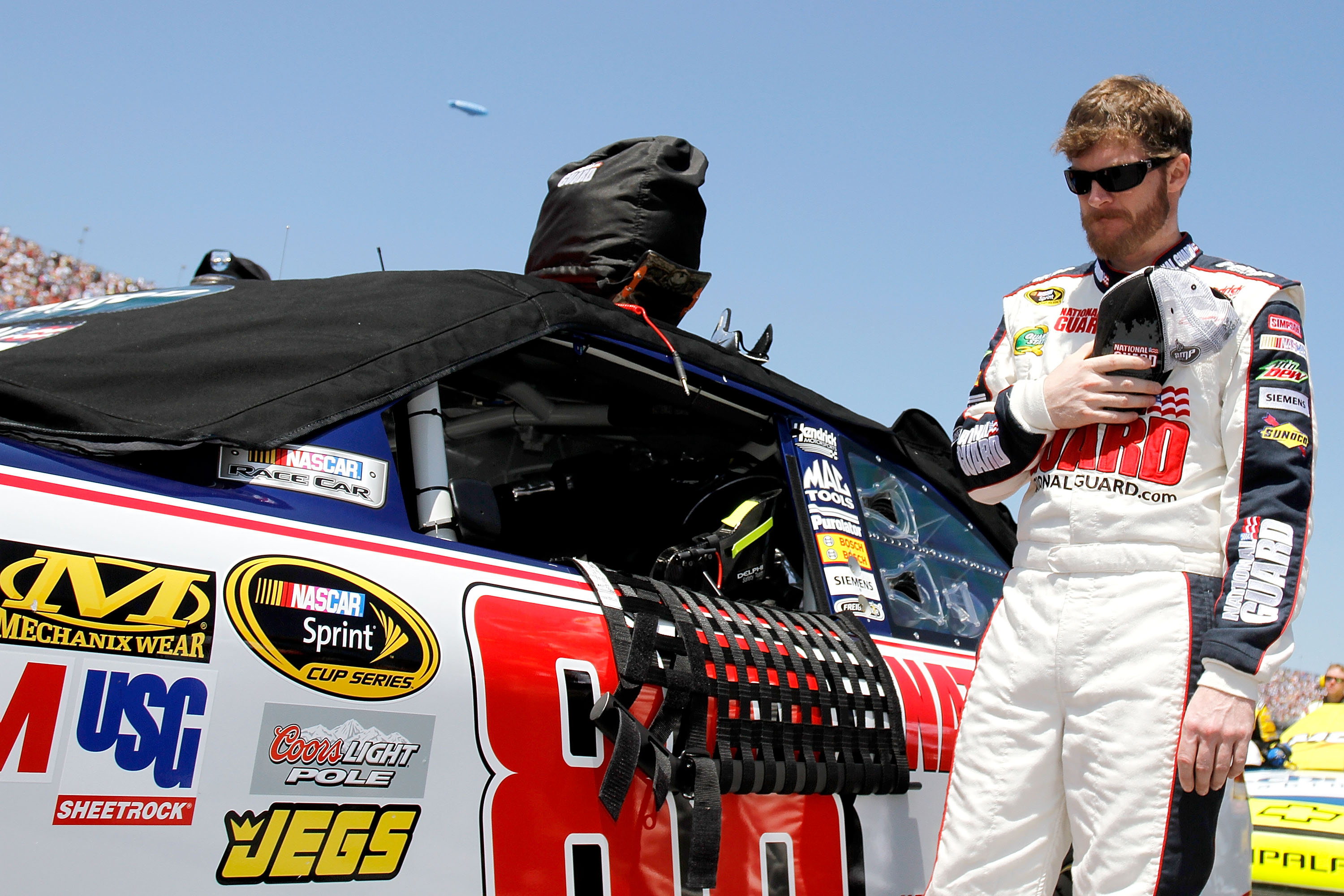 He's been the sport's most popular driver for over a decade.

Thus, an Earnhardt Jr. win that would break an almost 100-race winless streak could be the most popular win among NASCAR brass, with fans becoming excited about a possible title run. 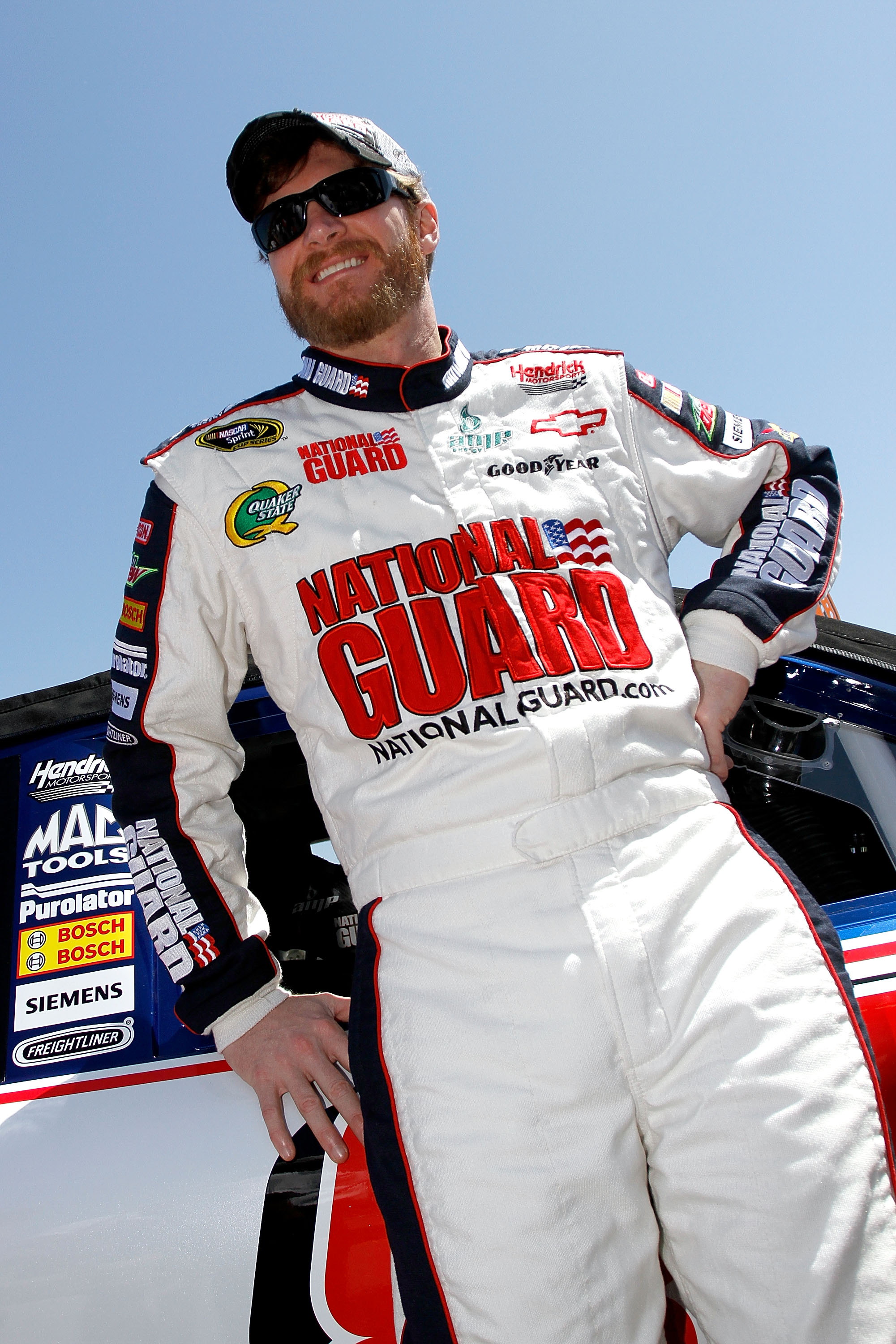 This may be the most bold of my suggestions to help the sport, but could you imagine if Junior wins his first Sprint Cup title this year? 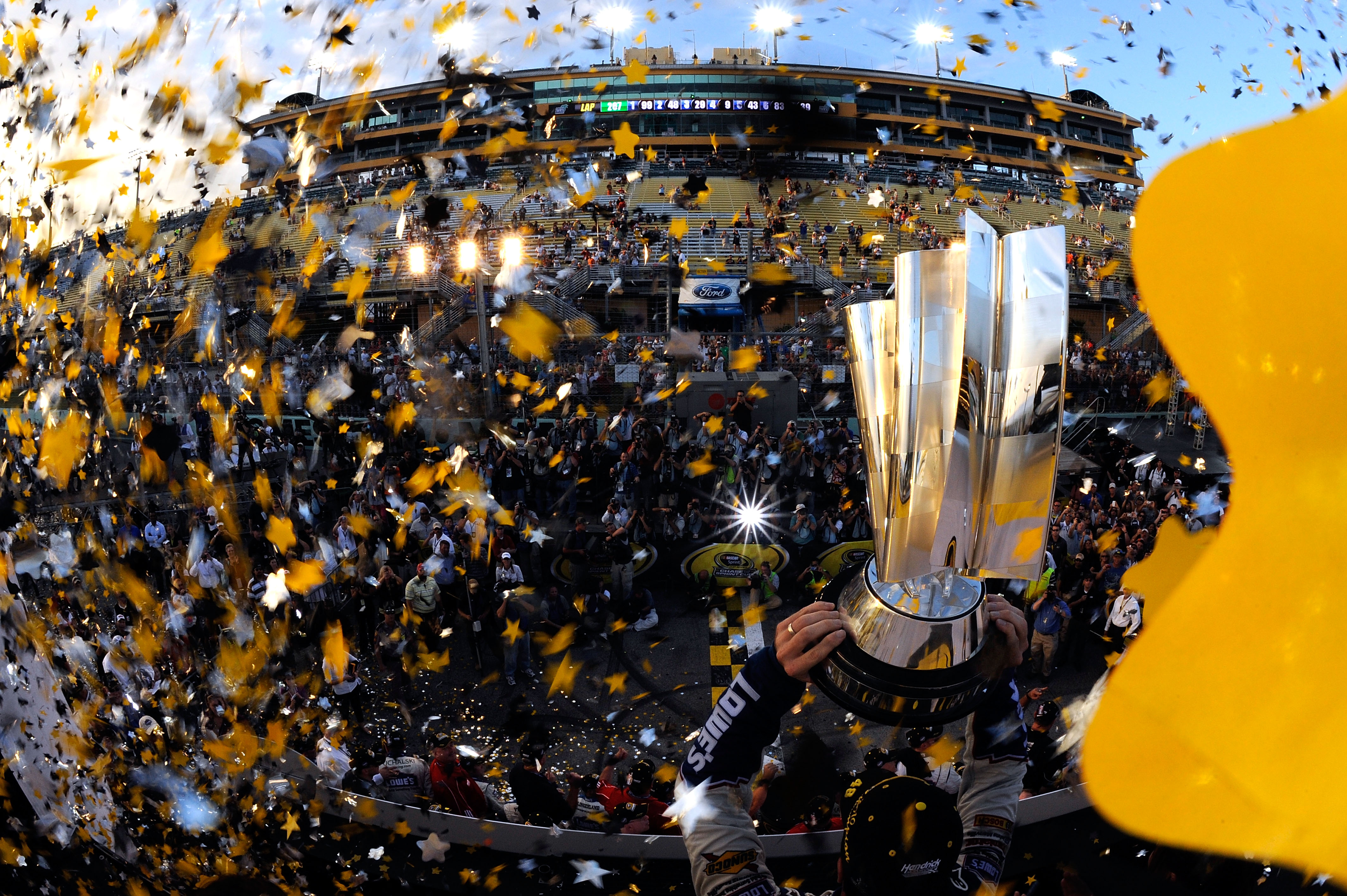 Unlike MLB (now offering a free live stream of one game every night for Facebook fans) and the NFL (free webcasts of Sunday Night Football with enhanced coverage), NASCAR's only legitimate service is TrackPass, a service offering live radio and scanner audio along with enhanced live scoring for a fee.

It's time for the sport to get with the program and allow every race to be streamed online for free, regardless of lost funds.

Eliminating the Chase for 2012 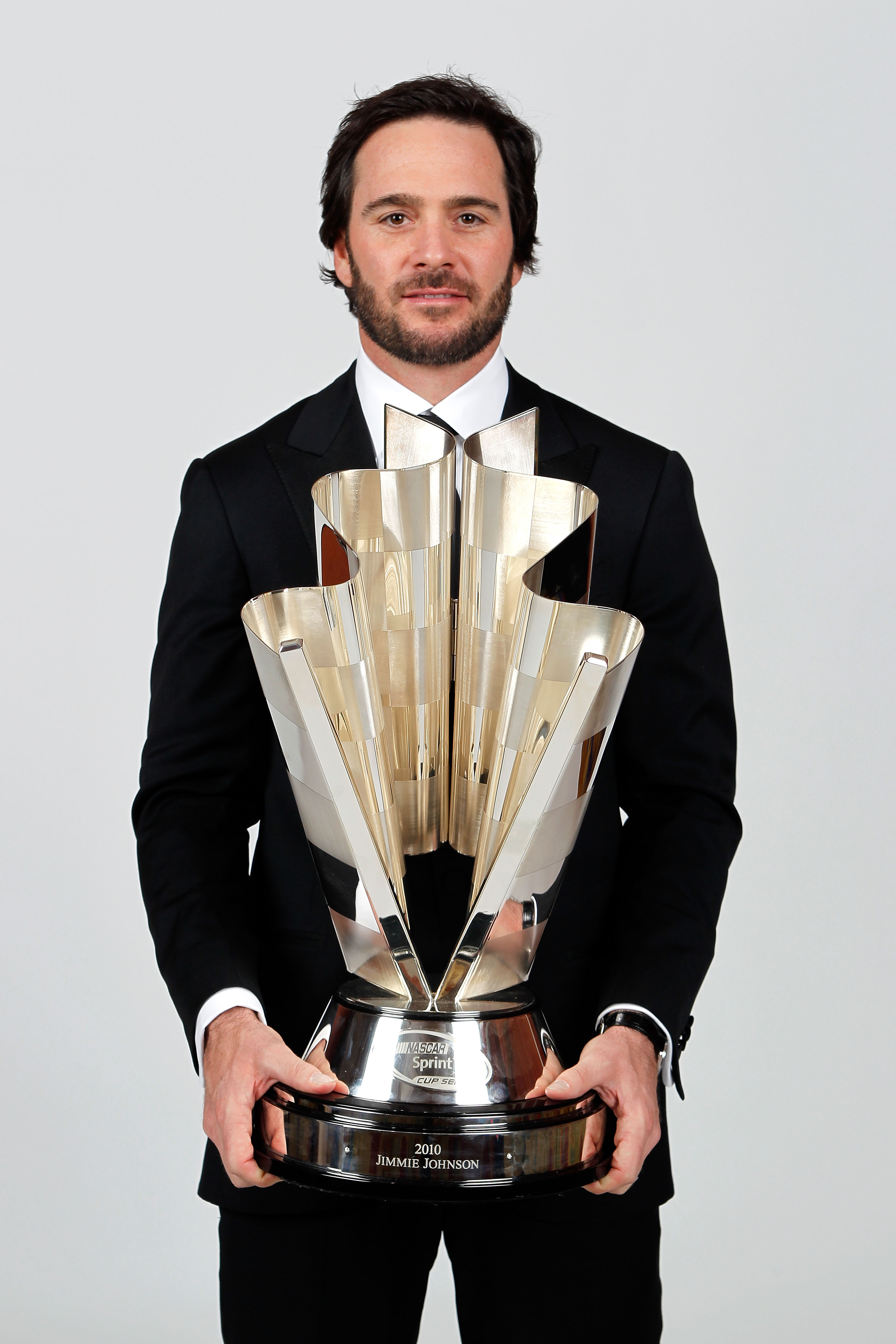 There's no question that the Chase for the Sprint Cup brought some much-needed drama to the final 10 races of the season upon its inception in 2004.

However, it now feels a bit convoluted. The qualifications for making the Chase have changed three times in less than 10 years, leading to a change in how points are tabulated as well.

It essentially boils an entire season down to 10 races for those who qualify for the Chase, and it's not necessarily fair to those who have shown consistency throughout a 26-race regular season.

By returning to a revised version of the old points system, drama and great points battles could be naturally produced.

As Alan Kulwicki showed us in 1992, it's entirely possible.

What do you think would help NASCAR right now? Comment below.