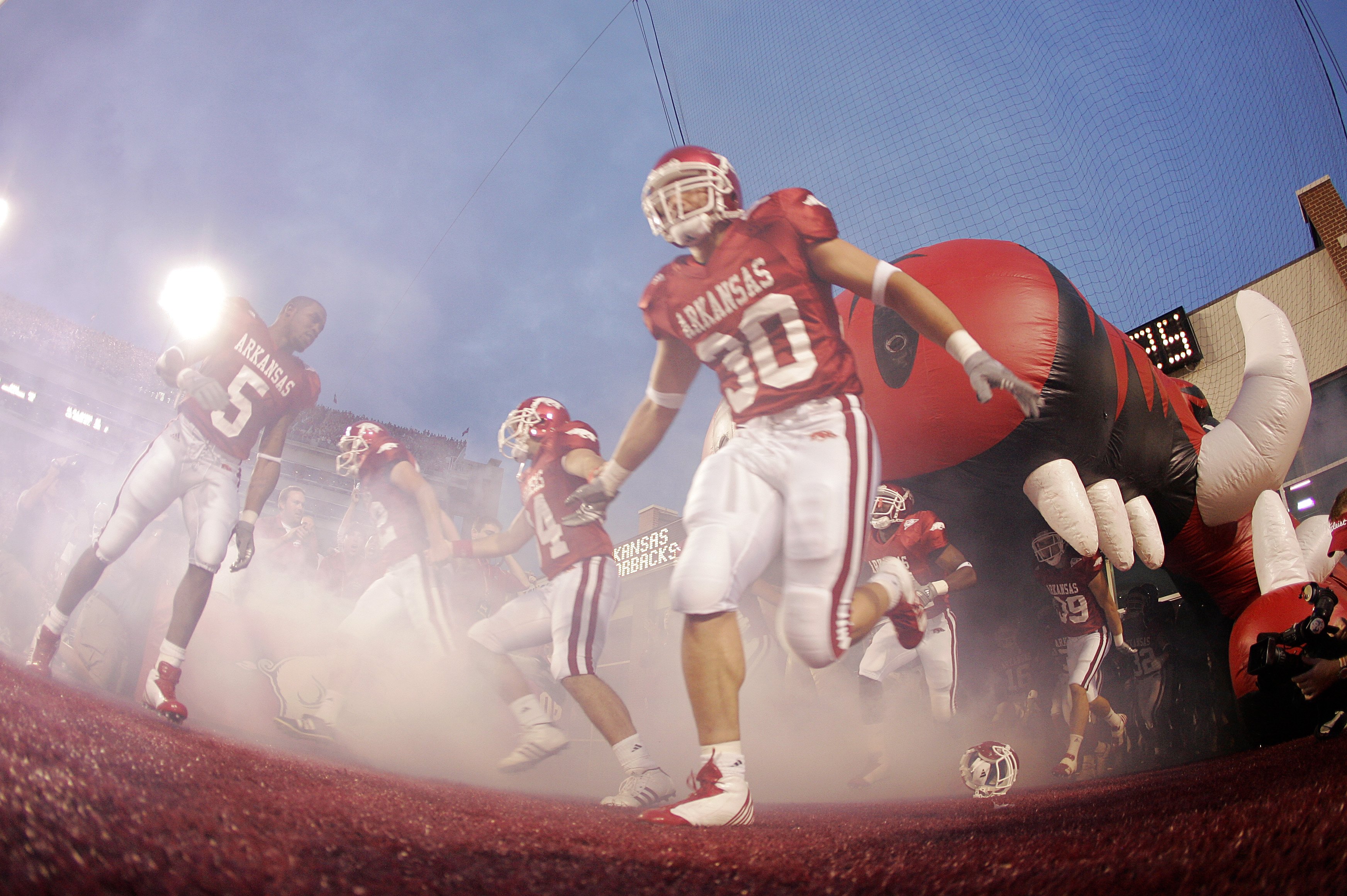 These players repented a proud program with grace and style, making them some of the most beloved figures in Arkansas history.

In no particular order, here are 25 of the most beloved figures in program history. 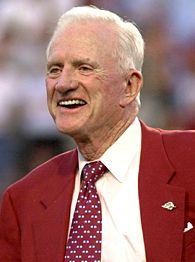 Broyles is the man that put Arkansas football and then the University of Arkansas athletics on the map.  He is responsible for improving football, basketball, baseball and track and field, successfully launching them into the national spotlight.

Broyles used a no-nonsense approach when dealing with his coaches and demanded respect from everyone within the program. He had a National Award named in his honor that was awarded to the best assistant coach of the year. 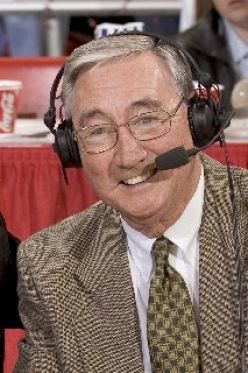 Paul Eells, the voice of the Razorbacks from 1978 till 2006, was killed in an automobile accident on his way to Little Rock from Fayetville.

If a true Hog fan couldn’t make it to the game, they would turn off the TV broadcast audio and turn up the home stereo to listen to Paul explain what was really going on.

Eells was a well-respected individual that never had an ill word said about him. 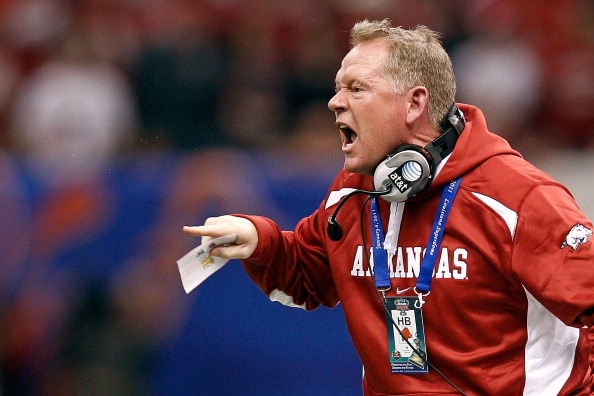 Petrino is the current head coach who came to the Razorbacks under a cloud of scrutiny as he bailed on the Atlanta Falcons. In his short time with the Razorbacks he has been remarkable, bringing the Razorbacks to their first BCS bowl. There is no question that the future looks bright with Petrino at the helm.

To make sure he doesn’t get away, the Razorbacks have locked down Petrino with a contract extension. 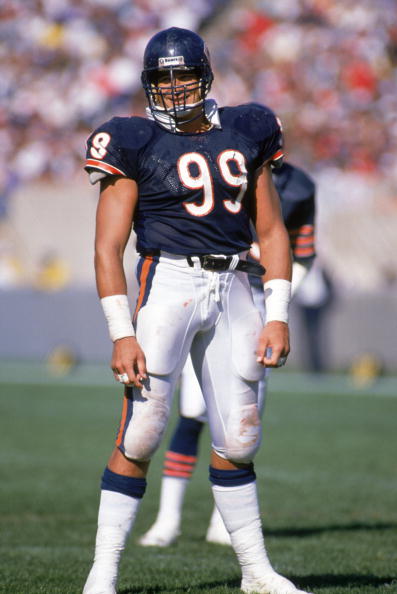 Dan Hampton is in the Pro Football Hall of Fame.

Hampton was unstoppable with Arkansas and brought that same intensity to the Buddy Ryan-led defense in Chicago where he won a Super Bowl. 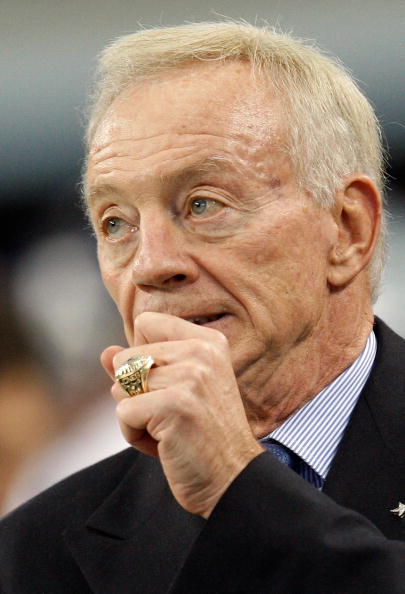 Perhaps one of the most controversial people on the list, Jerry Jones is a Razorback, through and through. The owner of the Dallas Cowboys is a proud alum that still supports his alma mater and always keeps an eye out for the Razorbacks in the draft.

Love him or hate him, Jones is one of the most interesting people in the history of the program. 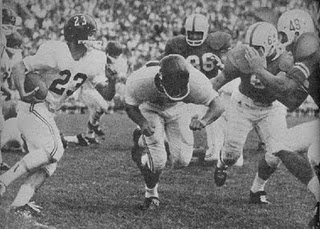 The man is in the Pro Football Hall of Fame and that is all you need to know.  The man’s nickname is Bambi and he is a mixture of toughness and grace.

Alworth turned down a chance to play with the New York Yankees to play for his beloved Hogs. 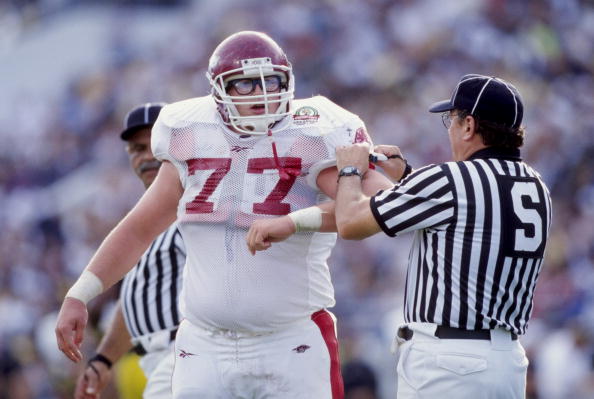 Burlsworth was a big offensive lineman with NFL talent that went from walk-on to All-American. Unfortunately, just days after being drafted to the NFL, Burlsworth lost his life in a car accident.

There is now an annual Brandon Burlsworth award, honoring walk-on players who have played excellent football.

Burlsworth has a foundation in his name that supports the physical and spiritual needs of children, and in particular, those children that have limited opportunities. He is just one of two razorback players to have their numbers retired. 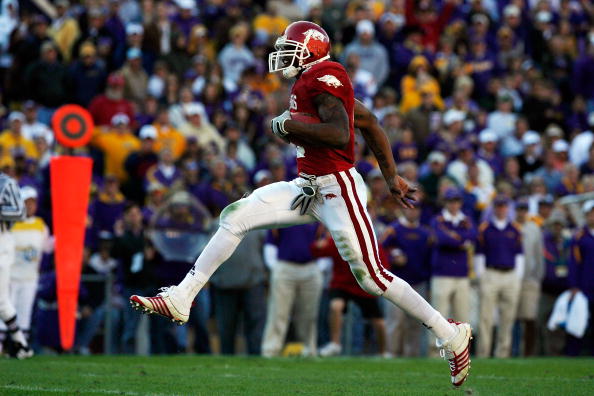 McFadden was one of the most dangerous running backs in the country that sliced and diced opposing defenses.

The talent of McFadden allowed the coaching staff to implement the wildcat and the term "Run DMC" meant something special to Arkansas fans.

D-Mac virtually holds all of the prominent records at Arkansas still to this day and will always be remembered as one of the best to suit up for the Hogs. 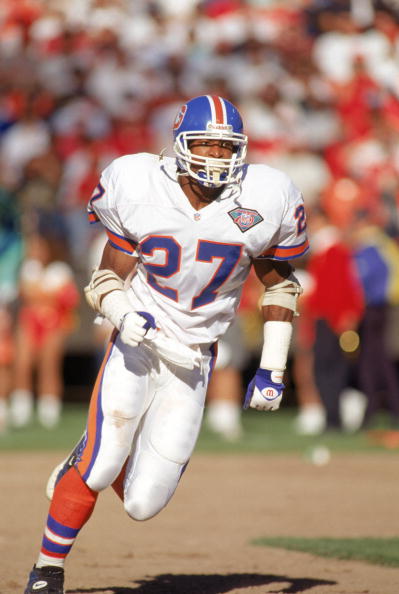 Atwater was named All-SWC three times and All-American twice.  He finished his career at Arkansas as the school’s leader in interceptions at 14.  Sadly, it is the one he dropped that is remembered by college football fans.

If someone wants to see how the position of safety is played, watch the Arkansas at Hawaii game in which the Hawaii QB Ken Niumatalolo (current coach at Navy) had to be pulled simply because of Atwater. 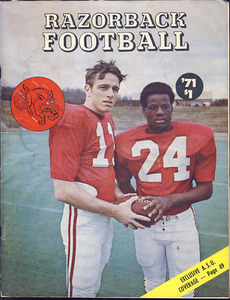 Ferguson was the 1971 SWC Player of the Year, highlighted by completing 31 passes in one game.  After years in the NFL he came back to Arkansas to coach quarterbacks, mentoring a young Clint Stoerner in the style of play that brought the possibility of “Hope and Change” to hog fans everywhere. 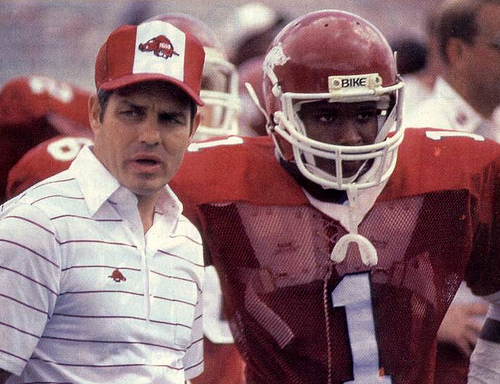 Hatfield was a player on the national championship team and currently has the highest winning percentage of any Razorback head coach at .760 overall, and .783 in conference play.

His legacy changed the football program and set the standard for others to follow. 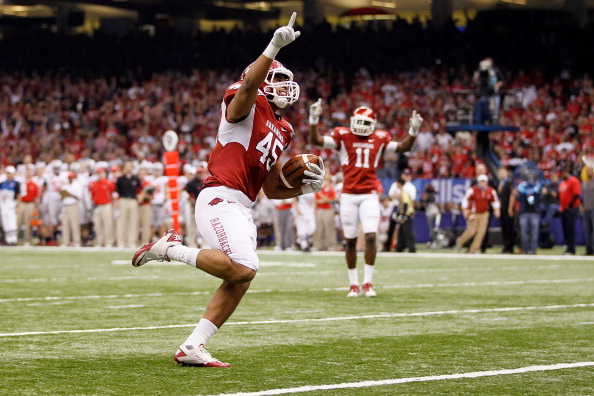 D.J. Williams is the perfect mix of athletic talent and a class act off the field. Williams was the recipient of the Mackey Award and the Disney Spirit Award.

Williams was a hard worker on the field who did not seek the spot light. His contribution on and off the field will be tough for others to match in the future. 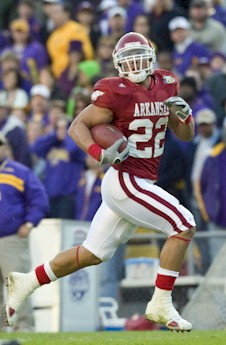 The tough bruising back for the Cleveland Browns got his start with the Razorbacks. Hillis collected 2,624 all-purpose yards and 23 touchdowns as a three-year starter at Arkansas where he set school records for running backs with 118 career catches, 1,195 yards receiving and 11 TD receptions. 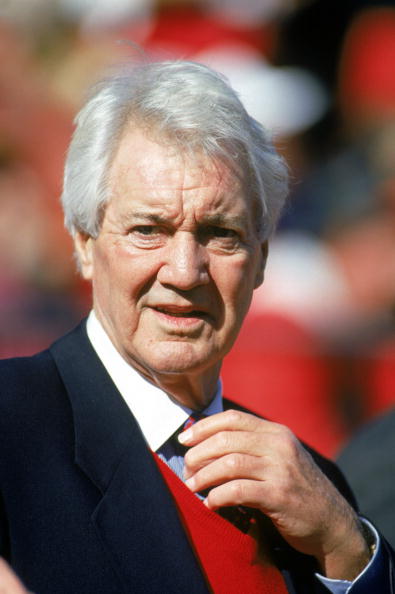 While there are few around that remember watching Pat play as a Razorback, there are very few hog fans who don’t revel in the fact that the smoothest voice in play-by-play belongs to one of our own. 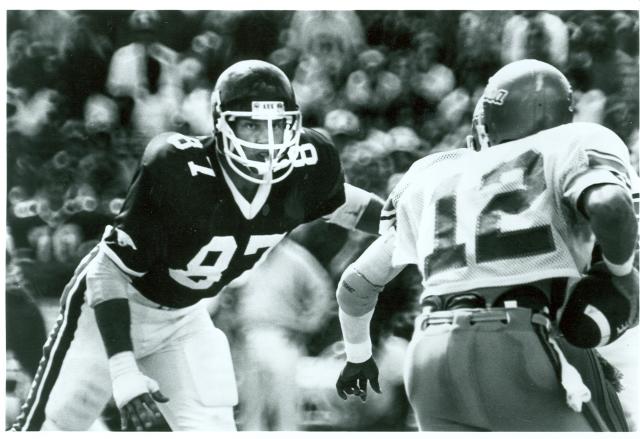 Billy Ray was a chip off the old block that followed in his father’s footsteps. 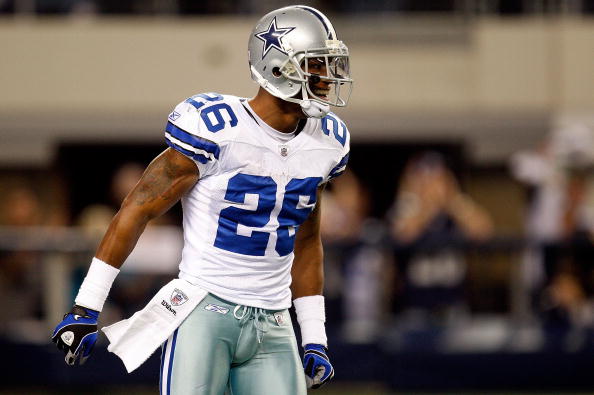 Hamlin, as known as the Hammer, was a hard hitting player that followed the mold of Steve Atwater.  Hamlin finished his three-year career at Arkansas with 381 tackles and was named to multiple All-American teams. 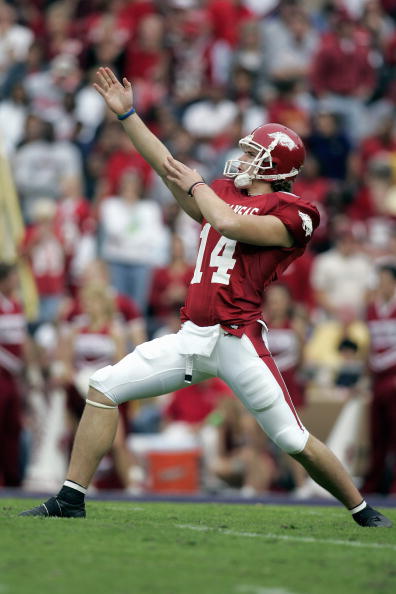 It is rare that a punter would make the list, but Skinner makes the cut.

Not only is he near the leader in every punting category the school has, there was the “pre-punt ritual” that was plastered all over ESPN and even became a student ritual before every punt. 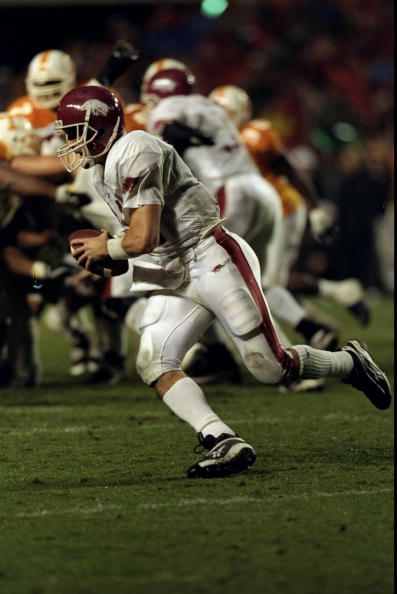 Stoener will forever be known outside Arkansas for the fumble in Knoxville.  In state, he is known as the guy who came back and beat them the next year.  Probably the last time you will see a goal post carried down Dickson Street. 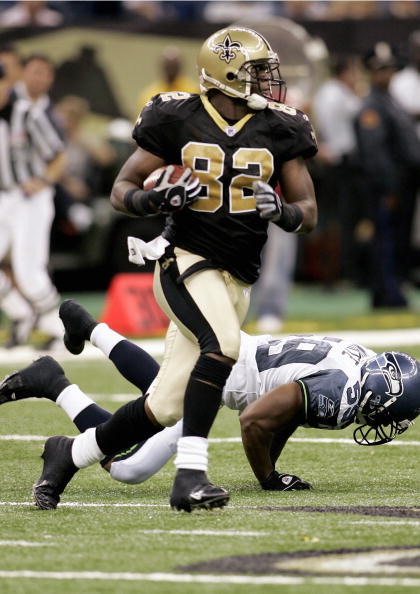 Boo Williams sounds so much better than Eddie Lee Williams, and so it became the second most common chant for the hogs during Williams' years in Fayetteville.

At first announcers didn’t understand why everyone “Booed” when Williams got the ball, but it didn’t take them or the NFL to realize his talent. 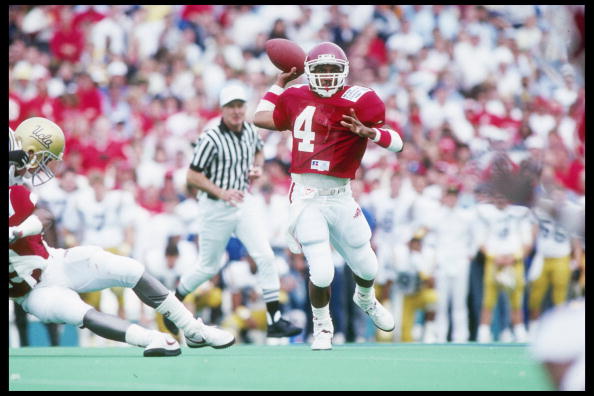 Quinn Grovey is probably one of the best option quarterbacks in the later half of the 20th century.

His skill is one of the main reasons that Hatfield’s winning percentage is so high.

To understand what a threat this man was, all you need to do is watch his first series against the Hurricanes when they played in Miami.  The ball was snapped, Miami’s defense ran to the short side of the field, while Grovey handed the ball off to Foster who took it up the middle for a huge gain. 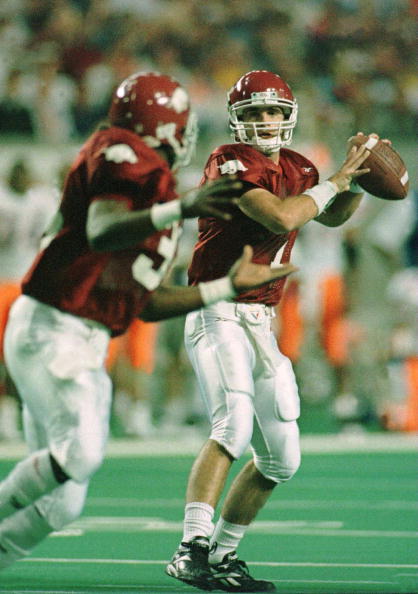 If Arkansas football had royalty, it would be the Lunney’s.

During the dark years of Danny Ford, even though the team won the Western Division Championship, if something special was going to happen, Lunney and Hill had to be involved. Although J.J. Meadors was involved once or twice, Barry Lunney was a special player. 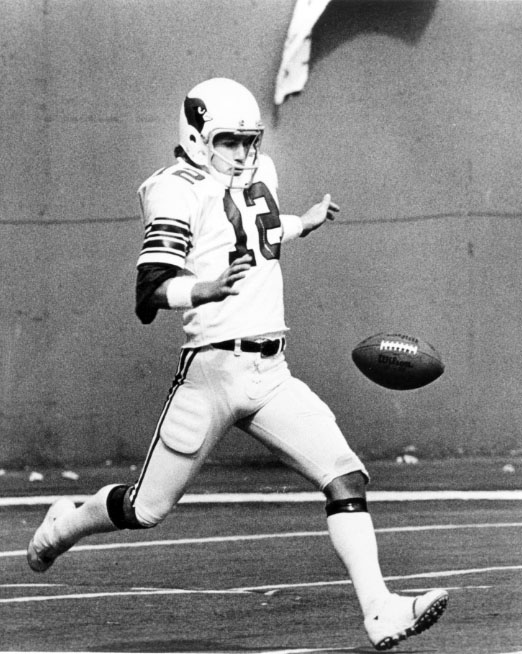 Steve Little is arguably the best kicker Arkansas has ever had.

Unfortunately, Little had a miserable NFL career and was later seriously hurt in a car accident, leading to his death at the young age of 43.

What ever happened to the “Steve Little helmet” car that used to run all over the field before games? 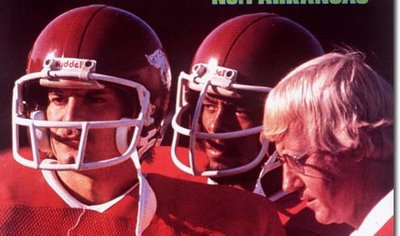 Calcagni had the best winning percentage of any quarterback in school history.

He led the team to a win against Oklahoma in the Orange Bowl and a victory over the Georgia Bulldogs in the Cotton Bowl. Tied UCLA in the Fiesta Bowl. 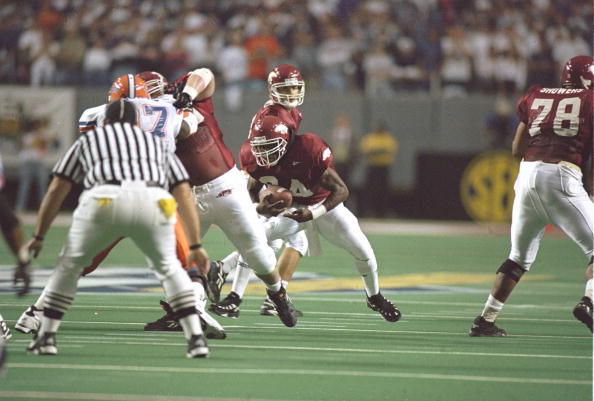 Hill is a monster running back from Malvern that could have put up the numbers that Darren McFadden did and Knile Davis will.

However, after suffering a knee injury during the first half of the SEC Championship game, he was allowed to return to the game and destroy what was left.  He endured and had success, but nothing compared to what should have been. 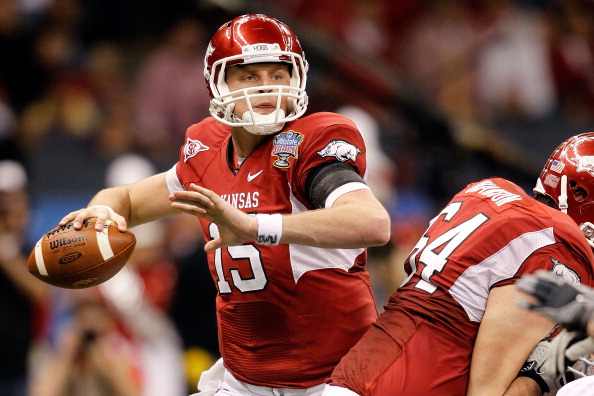 Mallett was a perfect fit for Petrino’s offense and put up astronomical numbers at his time in Arkansas. His style and his bravado was perfect to lead the Razorbacks to a big BCS game in his final season.

These are not the only beloved players in Arkansas history and others will soon follow as the years go by.