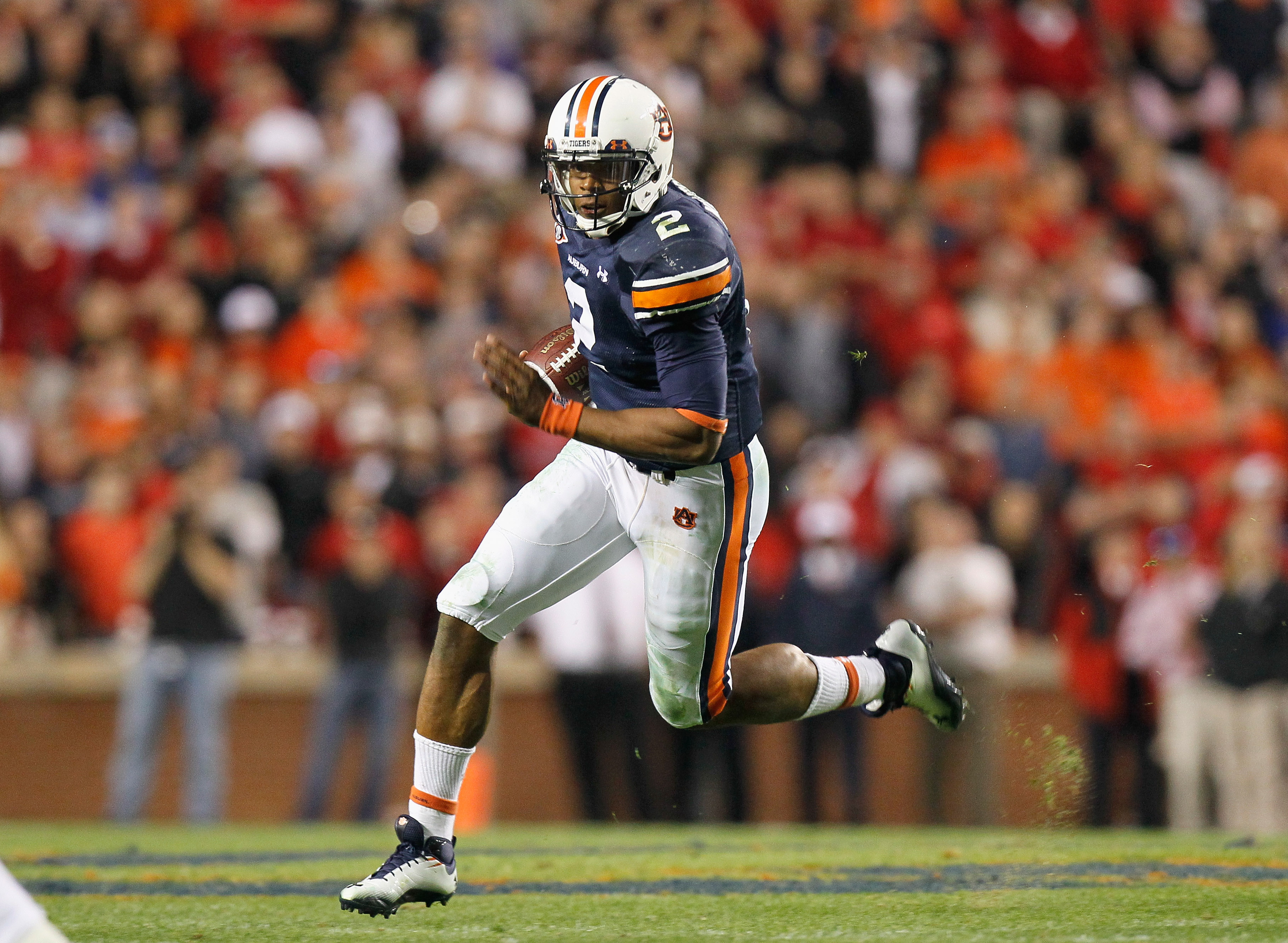 Tebow had an uncanny ability to make an offense better and even to make a team better. The guy had a motivational presence about him. Tebow was a leader for the Florida Gators.

When Tebow was making headlines with emotional speeches and leading his team to national championships, Cam Newton was waiting in the wings at Florida. After the 2008 season, Newton decided to take his services elsewhere.

Leaving for Blinn College was a professional decision for Newton. Shortly after arriving, Newton led Blinn to a JUCO national title. Let the man, the myth, the Auburn legend begin. Has college football witnessed the best players of the modern era back-to-back? Yes.

In comparing the legacies of the two, Newton seems to be pulling away with the lead with each snap, and at the end of the day Tebow won't hold Newton’s jock. 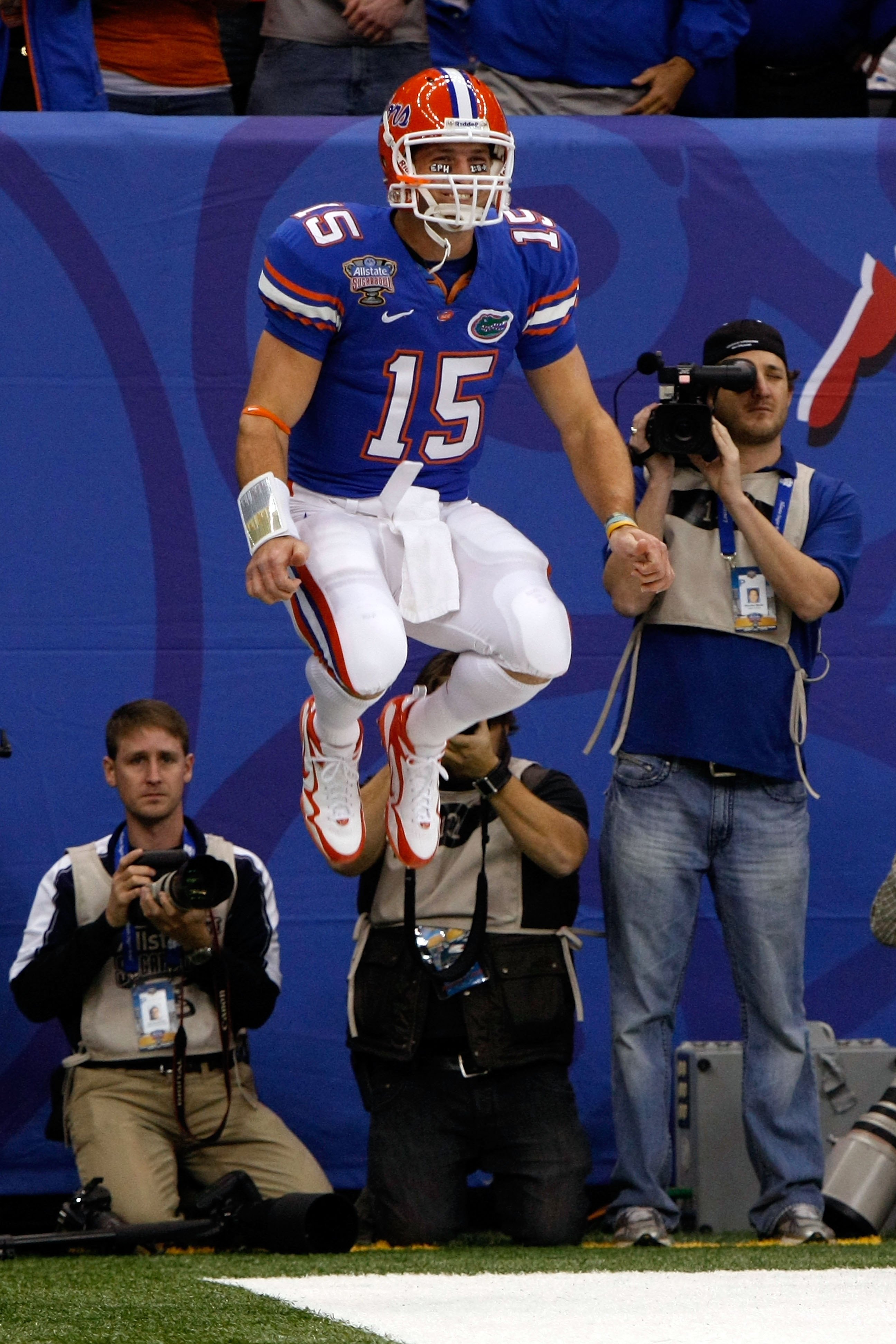 Tebow could run the football. He was a power guy that would get those tough, grinding yards. But only in his final season did Tebow have a carry of over 30 yards. He never was a speed guy, but no one seemed to be able to stop Tebow on the 4th-and-inches play.

Tebow had the ground game under control for much of his career. The only season he did not eclipse the 500-yard mark on the ground was his freshman year. Tebow got close to 1,000 twice, but never could peak the mountain that is the 1,000-yard rusher.

Tebow managed 4.4 yards a carry through his career. Far from modest, those numbers would be good for an every-down running back. That distinction is what won Tebow the Heisman as a sophomore and what carried the Gators to the National Championship Game twice in his four-year career there.

What made Tebow’s running game so special were the grinding yards and the nasty streak he seemed to carry onto the football field. No matter what his image was off the field, the guy played hard and lights-out on the football field. Tebow made the most of every carry and made sure that he pushed the ball forward. 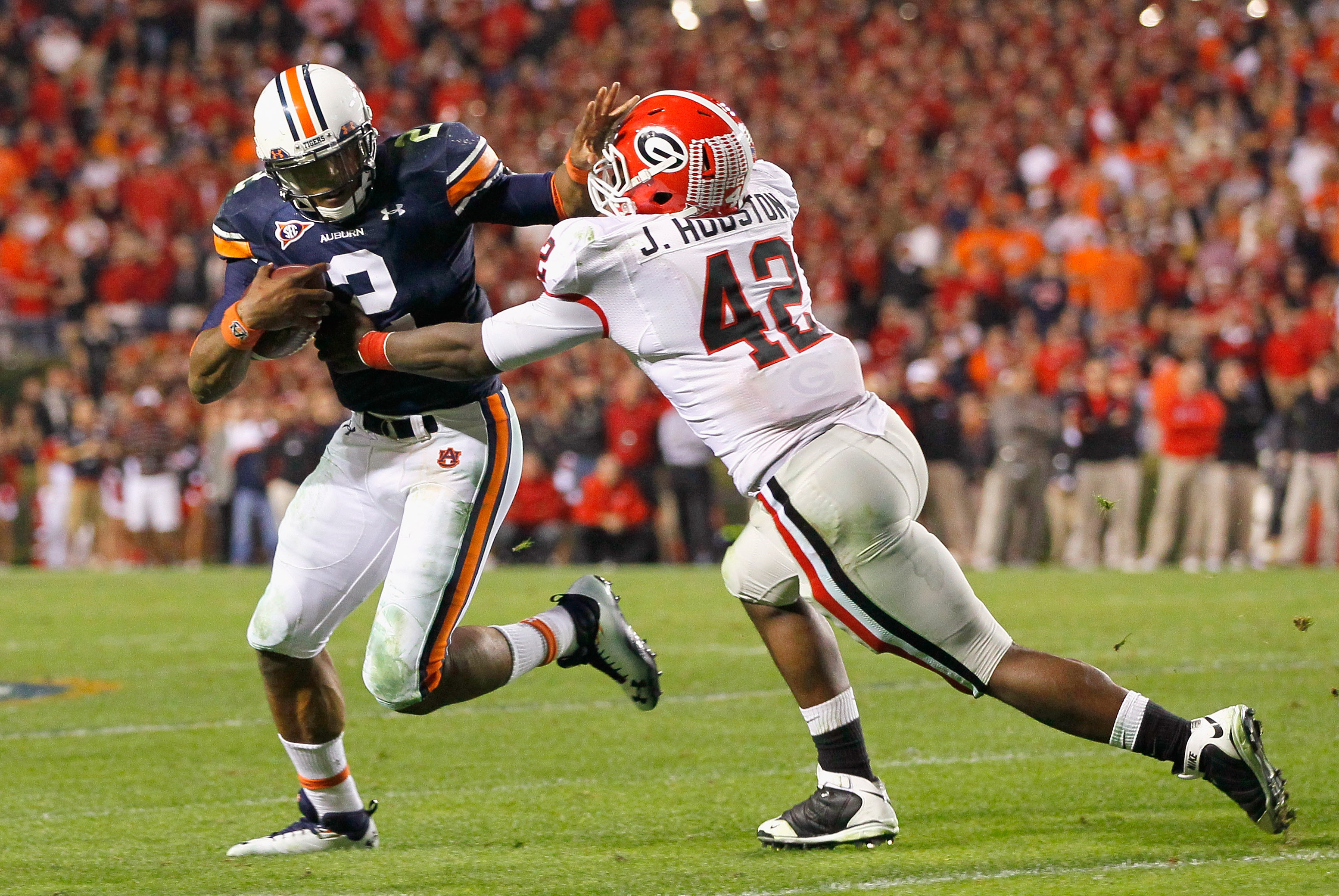 In 11 games this season, Newton has done something that no other SEC player has accomplished. Newton reached the 2,000/1,000 club against Georgia with 2,000 yards passing and 1,000 rushing. This distinction puts Newton in elite quarterback company, considering only eight players have accomplished this feat. His running game has led the way.

Newton has a career average per carry of 4.9 yards. Keep in mind this average includes a season with the Gators where he carried 5 times for 10 yards. Yes, Newton played at Florida. Eliminate those carries and his average jumps to 6.3.

What separates Newton from his predecessor is his speed. Newton and Tebow may have the same measurable speed, but Newton seems to have a unique game speed that puts him over the top. An extra gear, so to speak. That gear is what led to his Heisman-defining moment agaist LSU earlier this year. Newton seemed to accelerate past a fast-moving Patrick Peterson.

With a career-long run of 71 yards, Newton has far exceeded the longest carry of Tebow's career. This one statistic is not the one that gives the nod to Newton in the rushing attack, but it is Newton’s combination of speed, vision and power that makes him so unique. 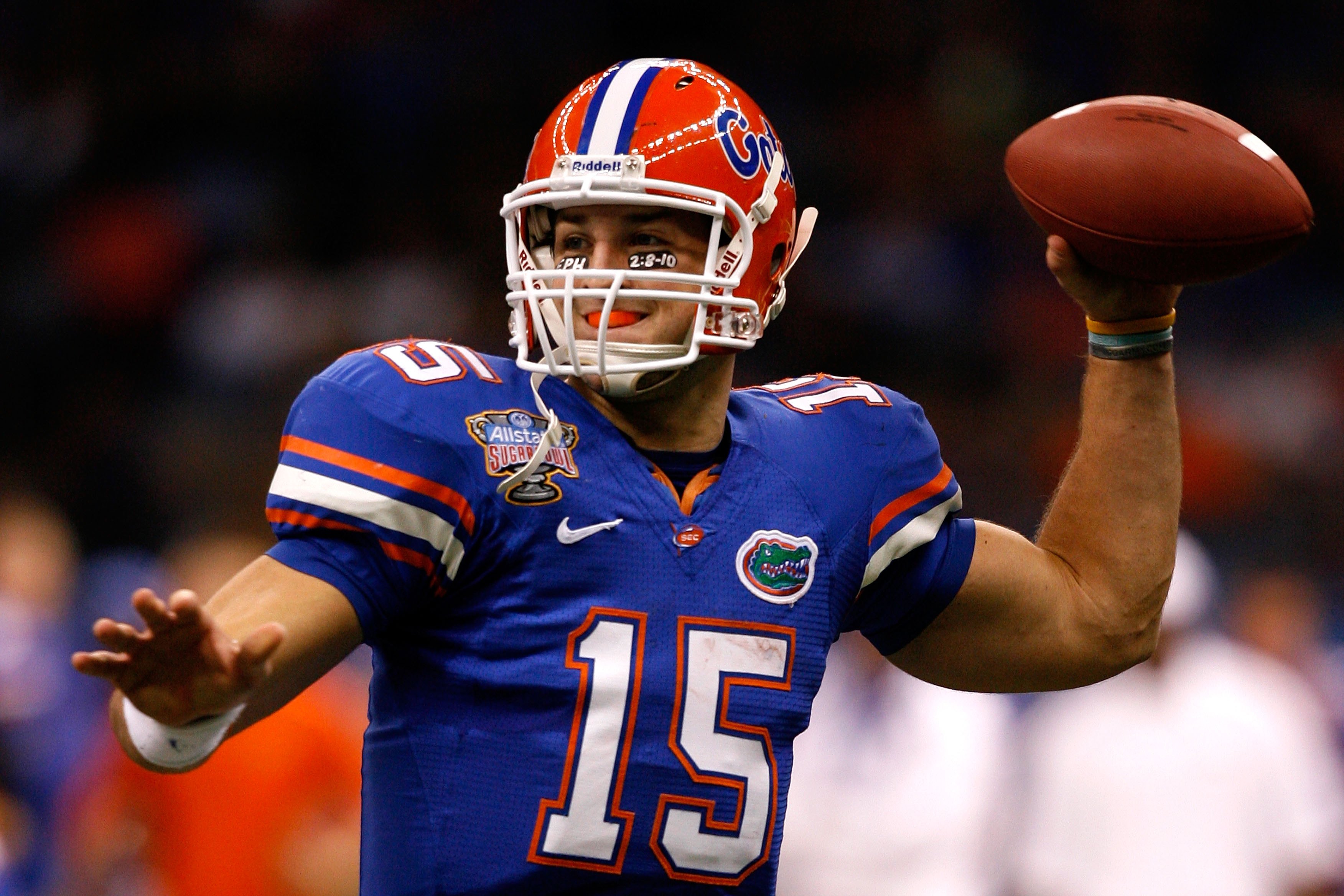 Tim Tebow was not known for his amazing mechanics throughout his career as the Florida quarterback. When he was a freshman, the one-two punch combo was Chris Leak throwing and Tebow running. Everyone focused on his ability to run and his seeming inability to throw.

Tebow was above the 65 percent completion mark three times in his career, and in his junior year finished at 64.4 percent. The guy completed passes. His passing efficiency rating led the nation his senior year and he maintained a top-five status throughout his career as well. What an awakening that stat should be.

Tebow had the reputation of a guy that loved to run—but he could throw. Granted, he had some great receivers around him at Florida, but he still had to put the ball where only his guys could get it, and he never tossed more than six interceptions in one season.

Despite the misgivings about his throwing motion, he connected when he needed to and redefined the jump pass to be what we know it as today. At the end of the day, he got it done. 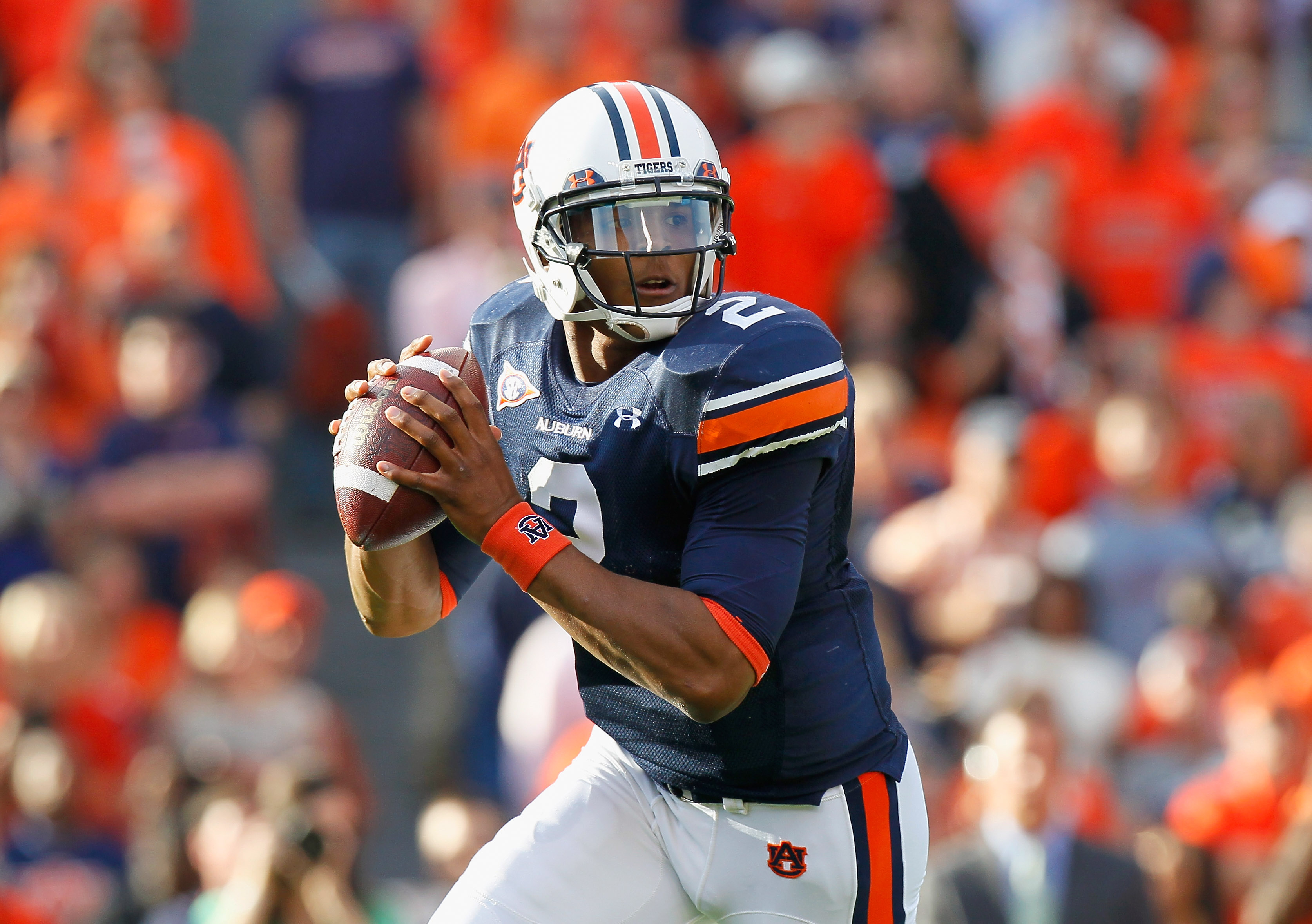 Early this season, Newton received the same distinction that Tebow had in his career: The guy can run, but force the pass and he is beatable. This carried some weight against Tebow, it seemed, but watching Newton as of late you have to notice his passing is not a weakness, but a strength.

Newton is second in the nation with passing efficiency so far, with a 183.58 rating. This number is better than any number Tebow finished with in his career. Projections have Newton finishing around the 2,500-yard mark for the season as well. With 21 passing touchdowns in only 11 games, he is in the driver’s seat to own Auburn’s single-season passing touchdown record.

Newton has the ability to extend the pocket, make guys miss and get the throw off. This elusiveness is one that college football has never witnessed.

The arm strength of Newton is a trait that seems to set him apart as well. Against Georgia, he threw a dart from 30 yards out into the end zone for a touchdown. After the game, Phillip Lutzenkirchen said he didn’t see the ball until it was in his hands.

Newton has the ability to make big-time throws. And he does it flat-footed. 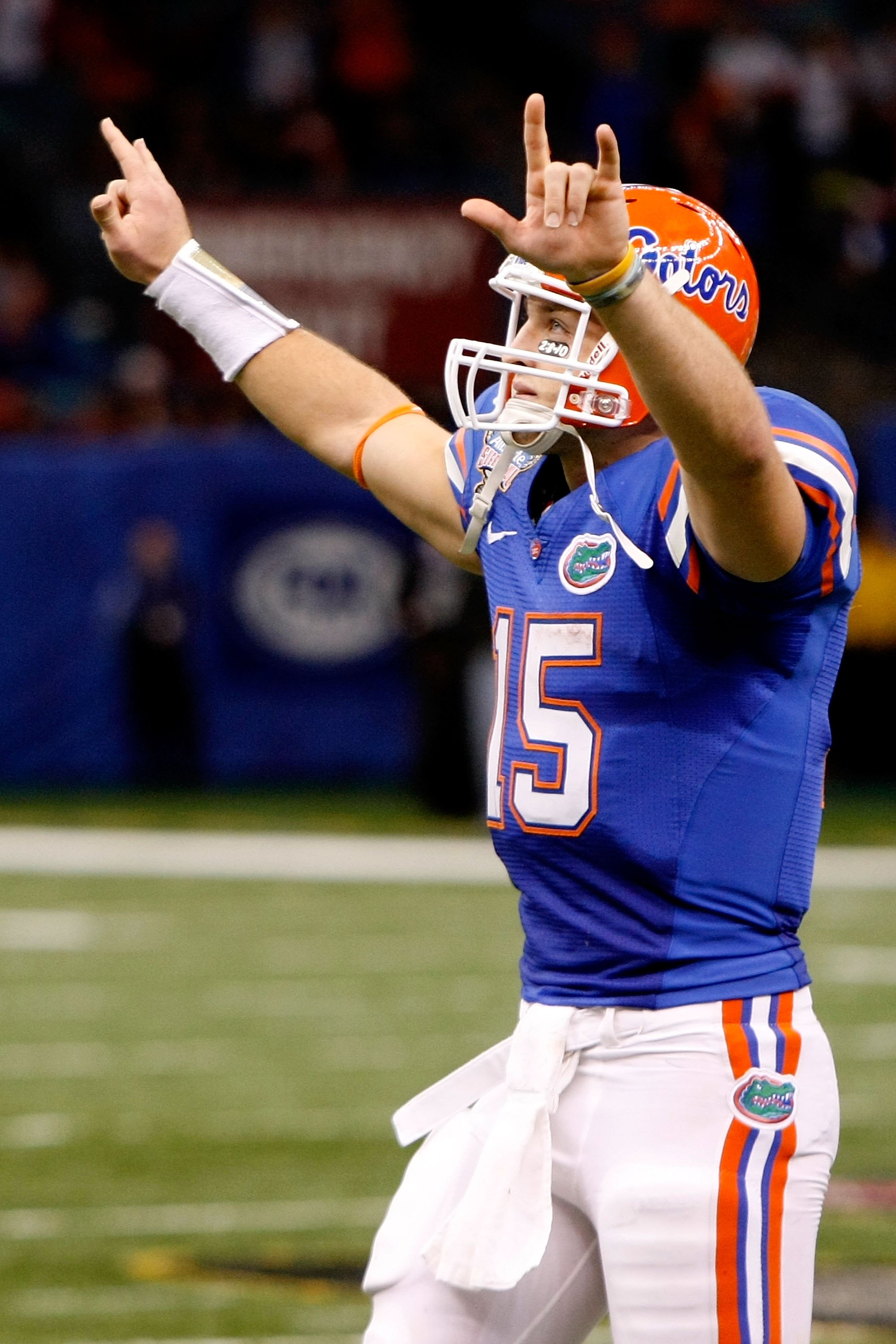 One distinct ability that Tebow carried was his leadership. Watching Tebow could get annoying at times, but his teammates followed his lead. He was a motivator. His team listened when he spoke and he had a presence about him.

On the field and off, you knew who Tebow was and, love it or hate it, you had to respect it. The speech he made famous after an upset loss to Ole Miss is now engraved on the walls of one of the dorms at Florida. He didn’t lose again in 2008 and led his Gators to a national championship. 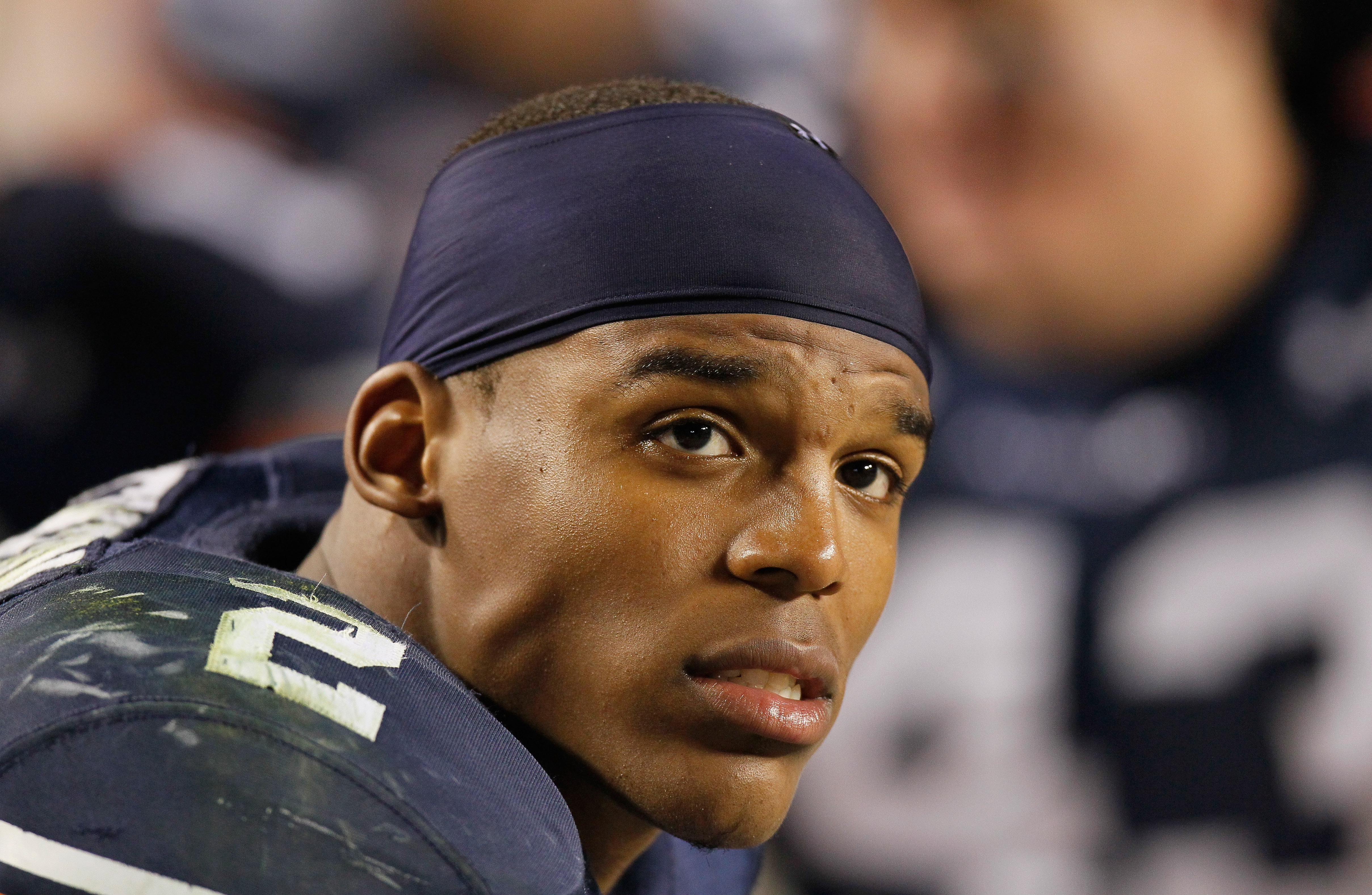 Cam Newton has faced his fair share of adversities this season, but opposing defenses haven't counted among them. He handles those quite easily.

So far, through 11 games Newton has shown that adversity off the field doesn’t affect him or his teammates on it.

Newton has stood in front of the media and answered tough questions. He also leads a team that no one picked to be undefeated at this point, but is. That underdog philosophy is a tough pill to swallow.

Being on top does bring a target, but it also brings a swagger and belief that you can and will win. Auburn didn’t have that heading into this season, but Newton seems to be the X-factor that led this team into the gates and toward college football's crystal-ball promised land.

How Auburn and Newton finish will determine who gets the edge here, but if Auburn does win out, the adversity that Newton and this team have faced surpasses anything in recent memory. 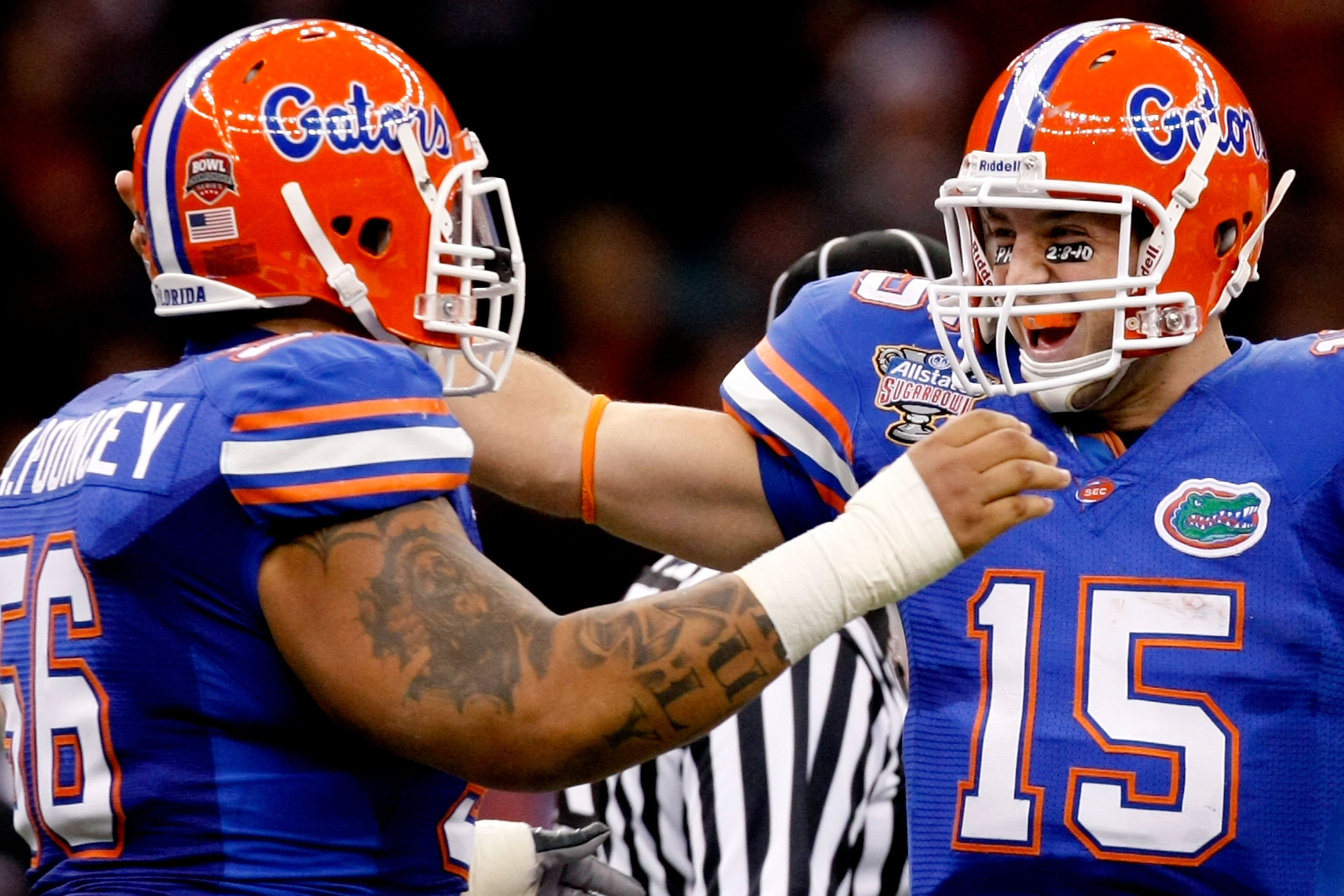 Tebow was an amazing athlete. He played college football with a passion like no other. He would run you over or run you down depending on the situation. He was a guy that hunted for hits, it seemed.

Despite his athletic ability, his intangibles as a quarterback still seemed to lack. Yes, the guy was strong and played well, but the debate about his ability to play the quarterback position is still in the air.

Even as a pro quarterback, the wildcat formation—or single-back for you old-school folks—is his best position. Tebow never was and never will be a true quarterback. In college, he was like the big kid that could outplay everyone on the playground, so you made him the QB.

Tebow doesn’t seem to have the intangibles to be a pure passing quarterback. This is what allows Newton to separate himself. 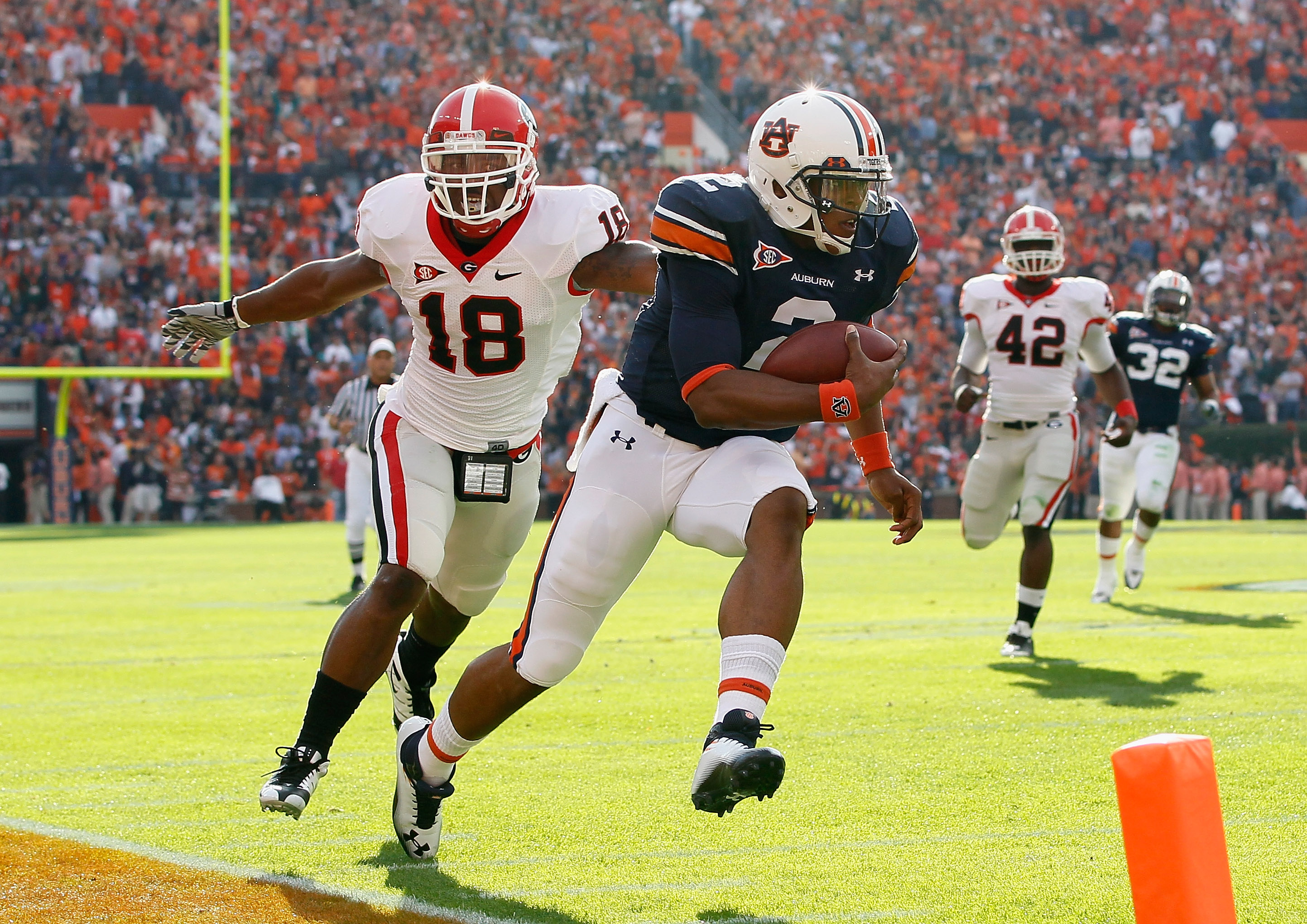 Newton has shown through the second half of the season that he plays the quarterback position well. He also has the big-kid-on-the-playground look, simply out-performing All-Americans up and down the field.

Given the chance however, Newton would sit in the pocket all day and throw the ball 30 times. The Auburn game plan doesn’t ask for that and Newton humbly obliges the coach’s calls to win ball games.

Newton’s ability to scramble and make plays, throw the ball, lead his team from the quarterback position and carry the weight of the team and an NCAA investigation shows his uniqueness.

Newton is a pure quarterback. At this point, it just seems easier to outplay the competition any way possible. Why put the ball in the air if you don’t have to? 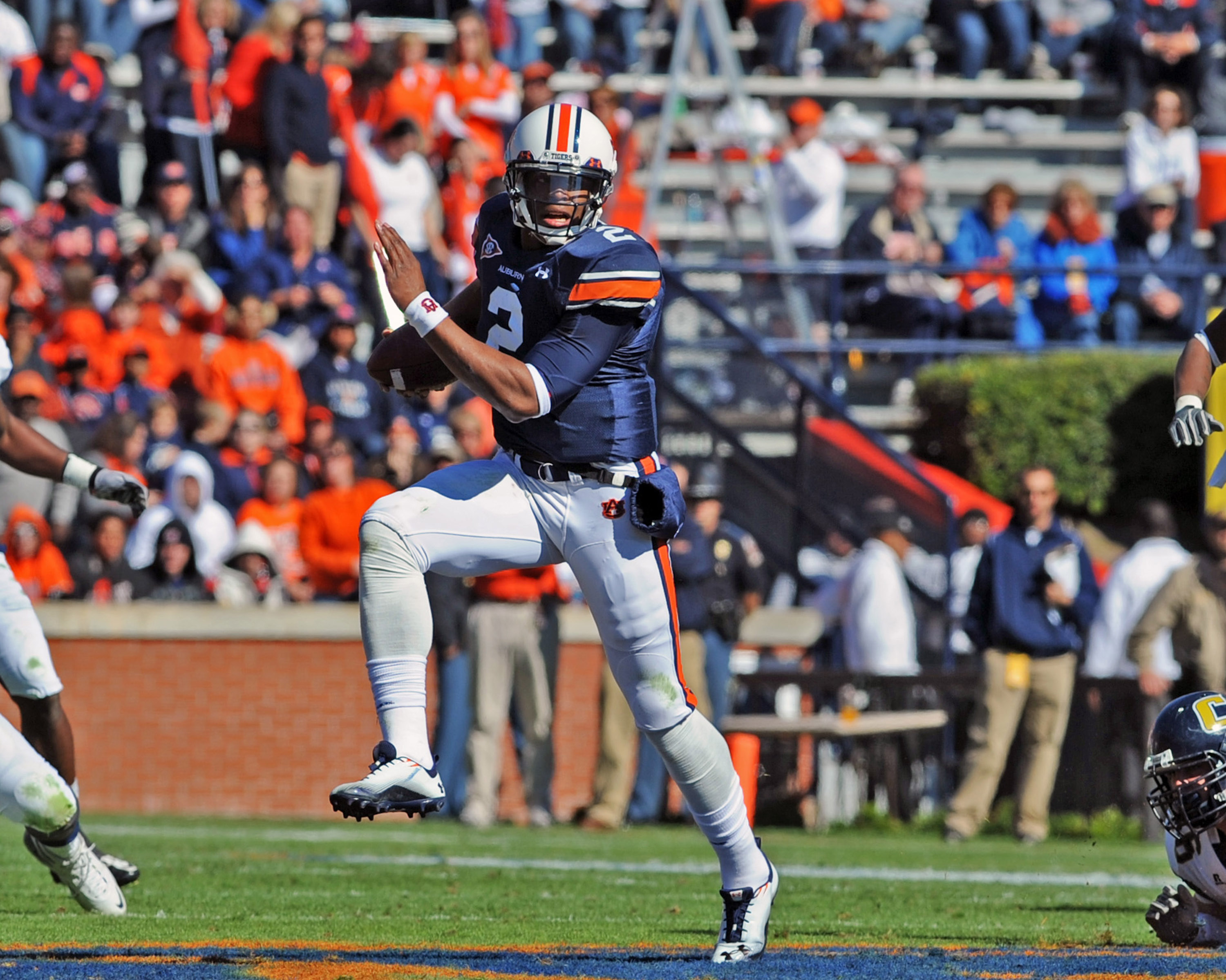 Looking back, Tim Tebow was an amazing leader and player for the Florida Gators. He made throws when he needed to and won a ton of games for Urban Cowboy and Co. The issue that he faced in college and the issue he faces in the NFL is his ability to play only the quarterback position.

Newton has won 11 games in a row and a lot of football is left to be played, but at this point he he has shown what an athlete and quarterback he truly is. With the weight of a university—and really, half a state—on his back, he has won. Tebow never had those kind of pressures.

When the closing bell rings on Newton and his college football career, many things are going to come to mind. There is no doubt the alleged scandal and personal issues will be remembered, but no matter what happens, Newton is the best college player of the modern era.

The great Vincent “Bo” Jackson put it best when he said Newton was the best he had ever witnessed. Anyone that has watched Newton play this year will agree. To say anything different is just foolish.

There is no doubt Tebow was a great player and will go down in college football lore, but pulling away with the lead right now is Cam Newton. He is about two steps ahead now, but barring a major change to health or eligibility Newton will finish off this run and Tebow will be standing in the wake as a distant second as the best college football player of the modern era.