Nebraska Football: Who Has the Edge Between the Cornhuskers and the Wildcats? 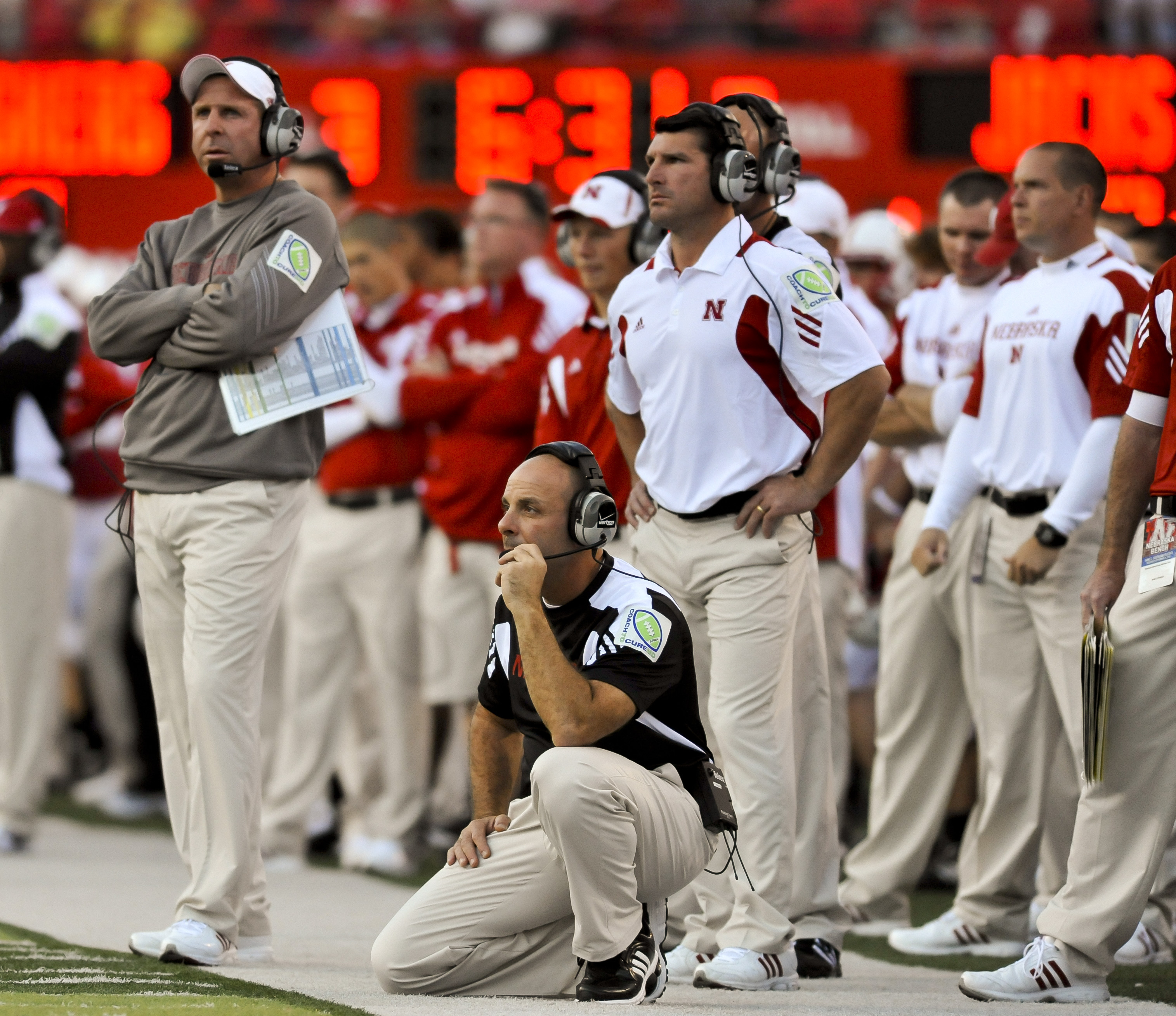 South Dakota State found a way to douse the fire by putting some heat right back onto Martinez.

Kansas State is undefeated in 2010 under the watch of Bill Snyder, who took a short hiatus while Ron Prince undid everything he had built up.

Thomas Daniel has been doing damage after shooting out from behind the Wildcats' offensive line, and one of the most dangerous running backs in the country looks to do the same versus the Blackshirts.

Speaking of the Nebraska defense, while questions have formed about the Cornhuskers' ability to contain the inside run, there is no doubt about linebacker LaVonte David or any member of the secondary.

Just who has the edge in this Thursday's night brawl in Manhattan? Let’s have a look. 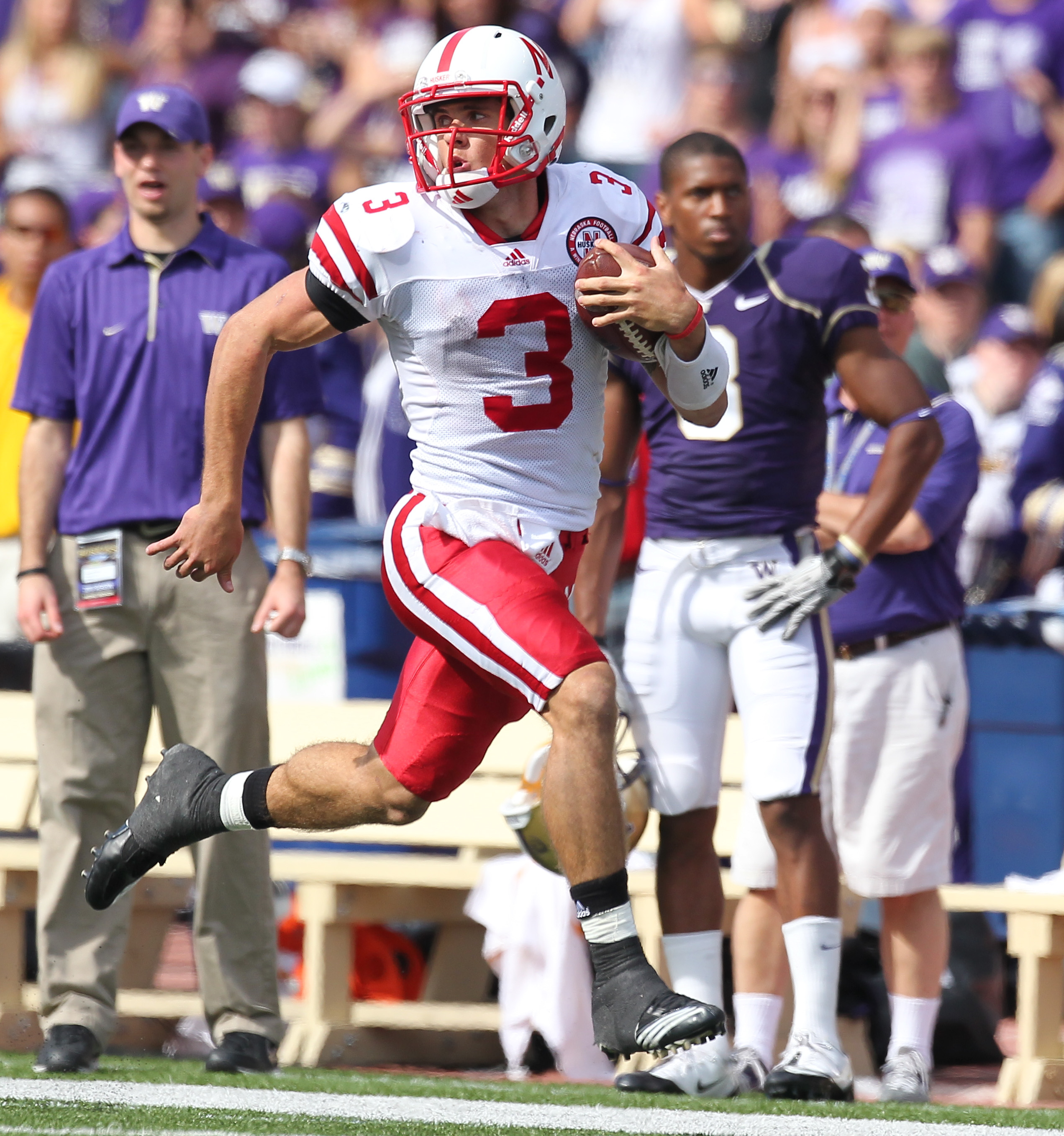 While the nation has been introduced to Taylor “T-Magic” Martinez on a few occasions already, not much has been heard about Coffman. It's easy for him to get lost behind the shuffle and simply be known as "the guy that hands off to Daniel Thomas."

Coffman is currently ranked No. 28 in the country in pass efficiency at a 60.5% clip. Martinez is unranked. While both haven’t had the best days throwing the football, the freshman Martinez laps the senior Coffman when it comes to toting the rock.

If the receivers go cold for Nebraska, or the Cornhuskers decide to head into Manhattan, Kansas, with a ground-based attack, Martinez should roll per usual. While serviceable, Coffman isn’t able to truly hit on all cylinders. 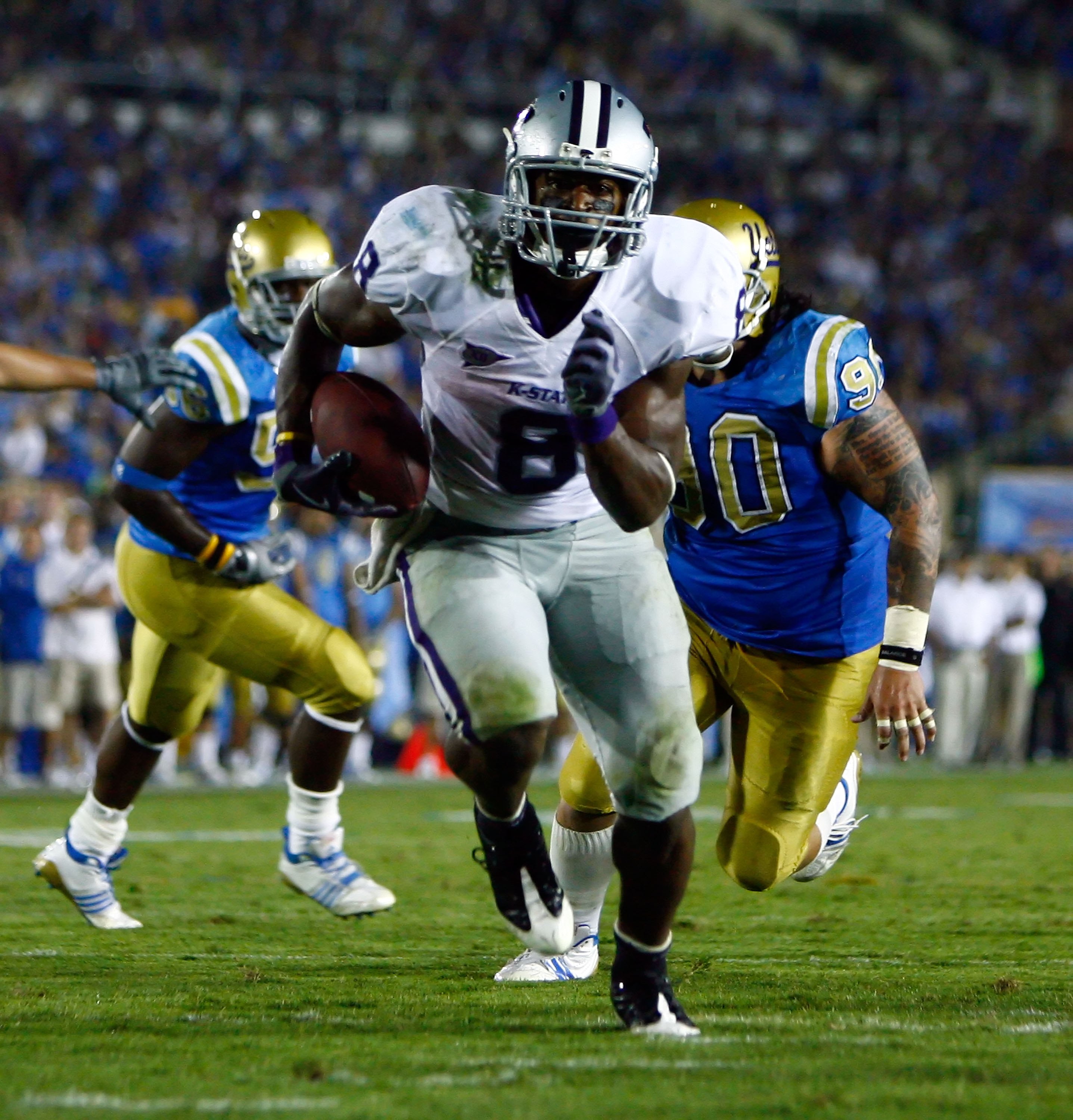 Here’s an area where the two teams can truly compare. Nebraska’s dual-headed monster of Helu, Jr. and Burkhead has left defenses smarting when they aren’t trying to wrangle Martinez. Helu, Jr. has more of a fluid style to his runs, whereas Burkhead provides a bit more power, yet still remains agile.

Daniel Thomas is the face of the Kansas State Wildcats. This could prove to be more of a negative than a positive depending on KSU head coach Bill Snyder’s game plan.

Since Thomas has carried the football more than twice as many times as either of Nebraska’s running backs, the Cornhuskers will likely target him to further wear down KSU's most explosive offensive weapon.

The Cornhuskers still have had some issues defending the inside run, and no doubt Kansas State will run Thomas right at the heart of the Blackshirts. The key question is: Will he find the daylight he needs?

At the end of the day, either of these talents is one to take to the bank. 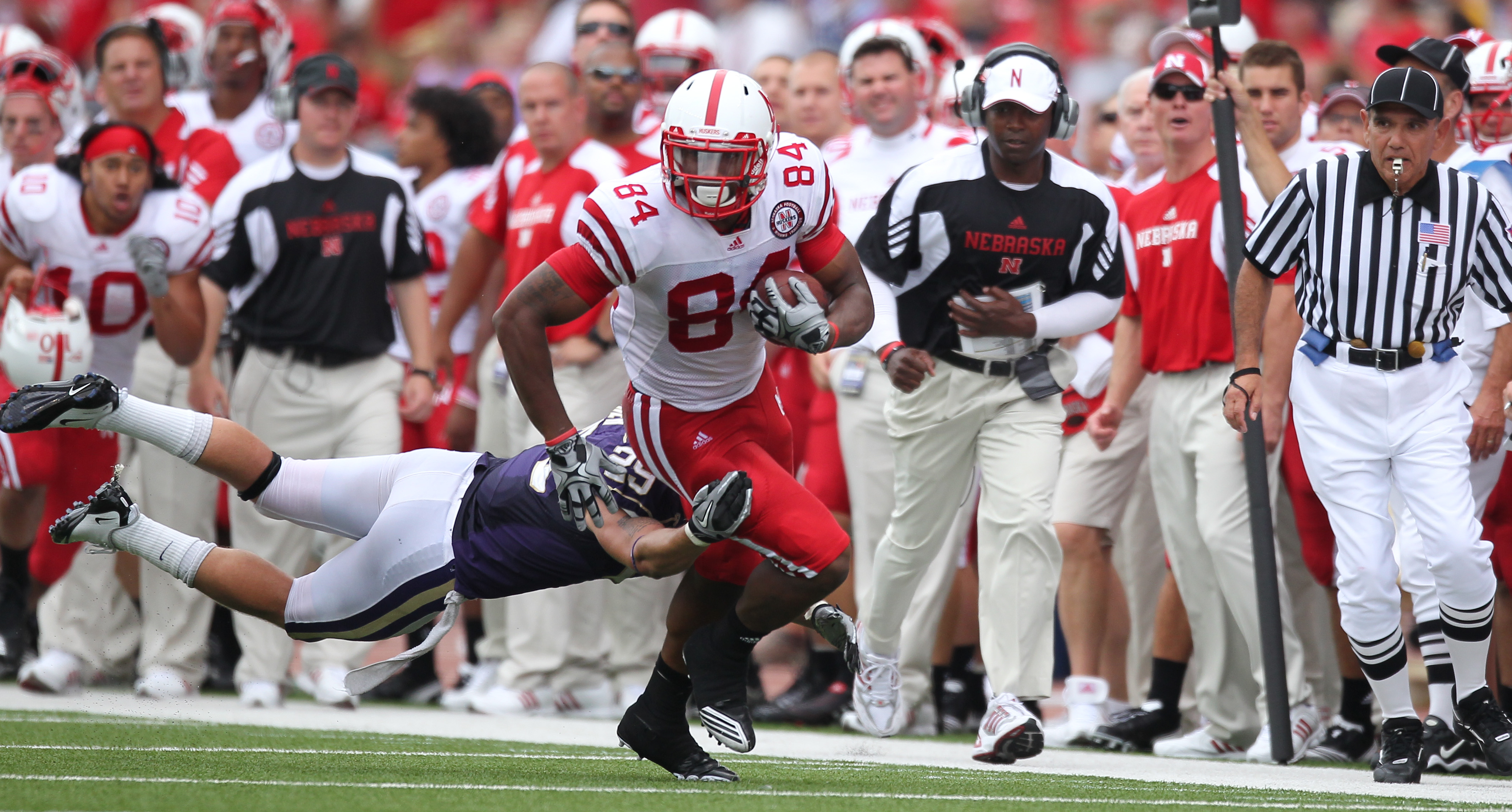 An area again deadlocked but, this time, not for a good reason. Kansas State sits at No. 99 in the country when it comes to sacks allowed (11 for the year, 2.75/game).  Head coach Bill Snyder wanted to use Daniel Thomas to help set the tone, not necessarily be the entire offense.

Smith, Quarles, and Thompson all seem to be a bit out of sync with their quarterback, not to say they aren’t trying. The same could be said for Kinnie, Paul, and McNeill, except they have several roles to play.

While Nebraska’s offense requires a passing game that moves the sticks in a West Coast Offense manner, the wide receivers also must block for any variation of a Martinez-Helu-Burkhead burst up the gut or around the edge.

Still, the opportunities have been there for all three. Kinnie has made the most of them thus far, though has yet to put up points reflecting his catches. Kinnie seems to have at least one big catch per game, and even had a few near misses that would put the massive Cornhuskers further up the chart. 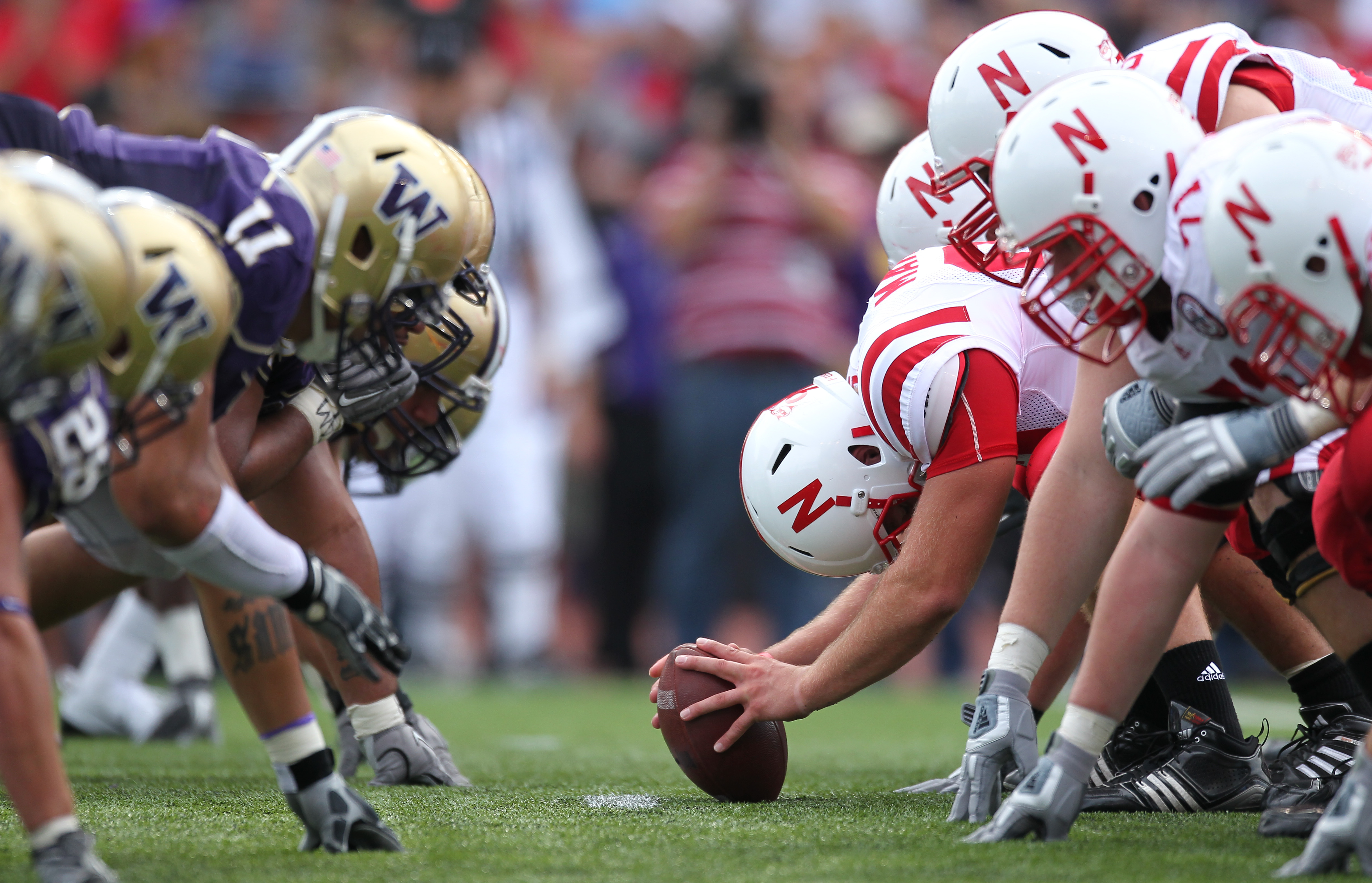 Nebraska’s newly found offensive outpouring had been scorching scoreboards until South Dakota State’s visit. Kansas State was chugging along just fine on the wheels of the Daniel Thomas Express until Central Florida paid them a visit.

Time to go back to the drawing board.

For Nebraska, their crew is holding up well and gelling around center Mike Caputo, who blocks very well for any runner. The guards are solid, but the tackle positions are still a mixture of youth and inexperience.

The run is solid for the most part, but expect Pelini and coach Barney Cotton to focus on how to get the zone-read options back into Taylor Martinez’s hands.

Even the Iowa State Cyclones were able to almost find an answer to the Wildcats’ Thomas. 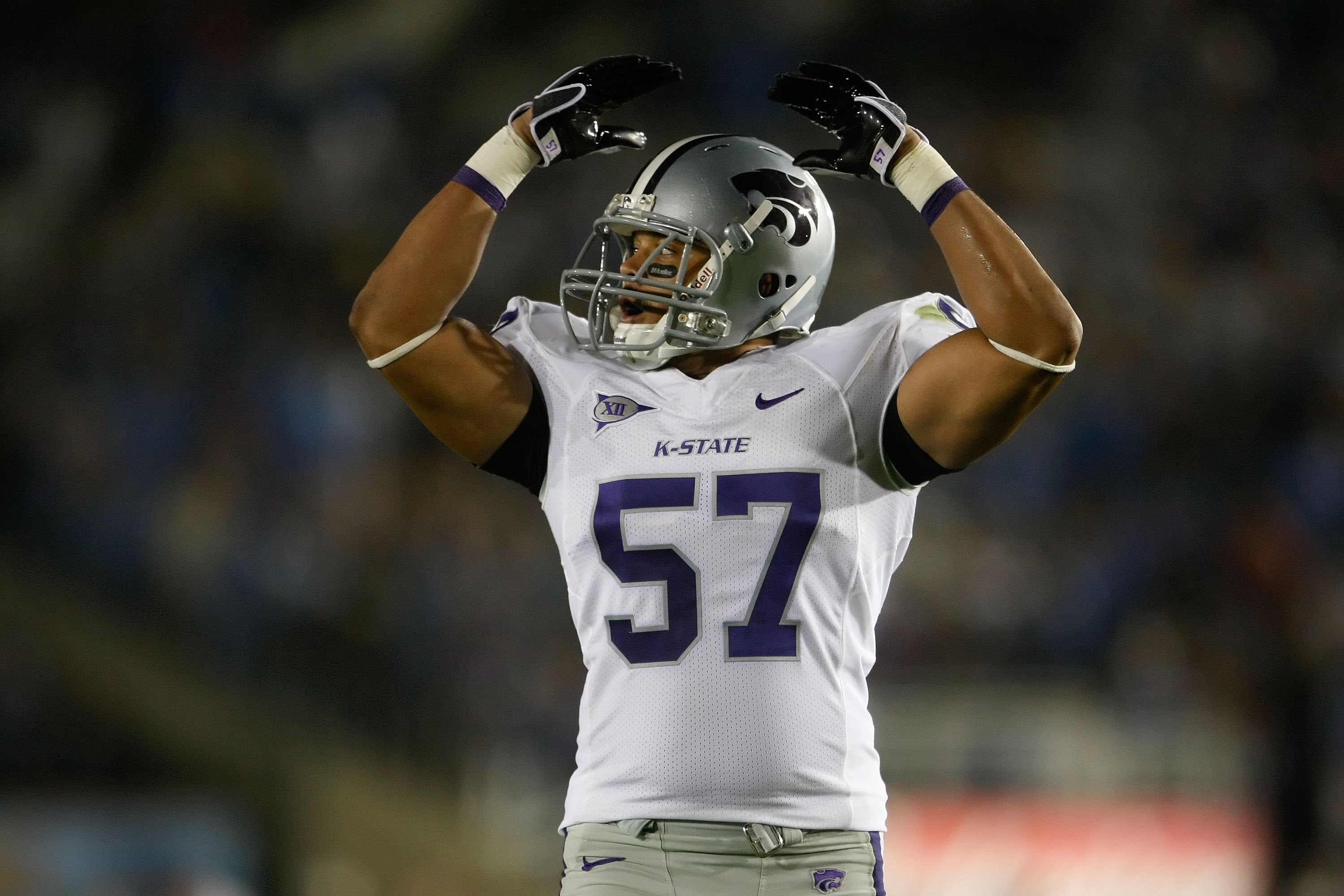 Since Game 1 versus Western Kentucky, Nebraska has faced some problems with the inside run, giving two starting running backs 100-plus-yard games. That’s the main knock on the Blackshirt line doing their best to replace Ndamukong Suh.

A defense should feel good if a day’s work equates to 250 yards or less. The Cornhuskers aren’t far off that.

Penetration is starting to find itself a bit more often, as the Pelini brothers tweak their talent to find ways to utilize the talents of the maulers on the field.

Kansas State has had its hands stomped on and just flat-out haven’t been fast enough to stop rushing attacks from UCLA (193). Iowa State (171), and Central Florida (252).

The Wildcats have managed to sneak through for the occasional sack. Honestly, it’s a surprise that KSU is, in fact, undefeated, but Central Florida nearly put an end to that last week.

This Thursday, if Nebraska clamps the door shut on Thomas a la UCF, the Wildcats are done. Regardless, Coffman’s going to face plenty of pressure from the front four. 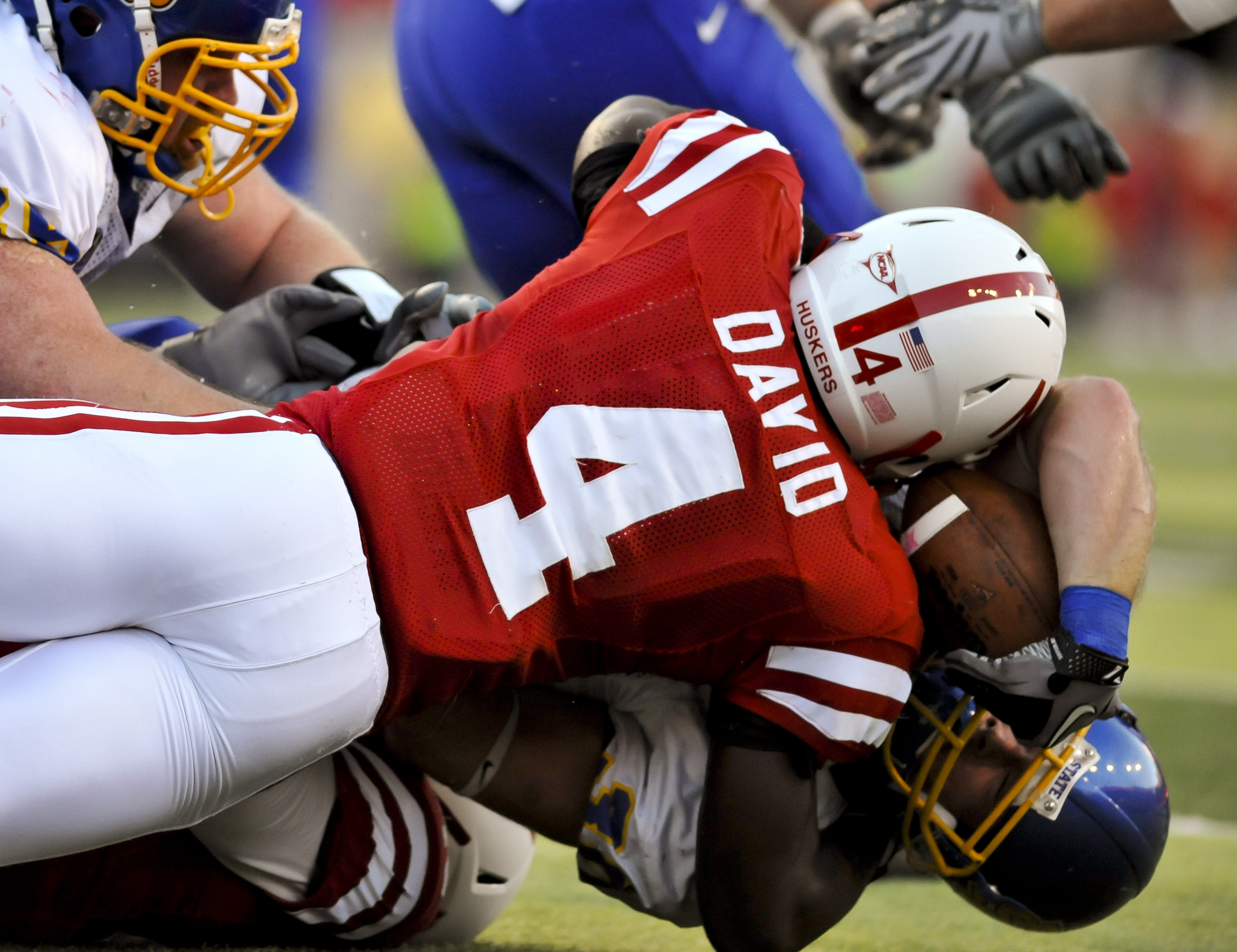 Nebraska has been able to move along without assistance from Sean Fischer and Will Compton thus far. Compton looks like a possible return for Texas, but caution is likely being used.

LaVonte David has been a pleasant surprise for the Blackshirts and an unwelcome one for the opposition. Versus South Dakota State, David racked up 19 tackles in total and added two pass breakups.

He has served as leader to an inexperienced but talented duo. His coaches have described Eric Martin as a “physical freak,” and Whaley plays in place of his “blood brother” Compton.

The two have had difficulties learning proper calls and signals, but time begets knowledge and that appears to be the case with these three.

Hrebec has been KSU’s answer to David, leading his team in tackles in the same fashion and being an anchor in the second line of defense.

He, along with Blake Slaughter and Jarrell Childs, fills more of a traditional linebacker role than that of David, and either Martin or Whaley, in their 4-2-5 “Peso.”

While Nebraska might have the edge in the talent with David, KSU has cohesion and should know their calls up and down. 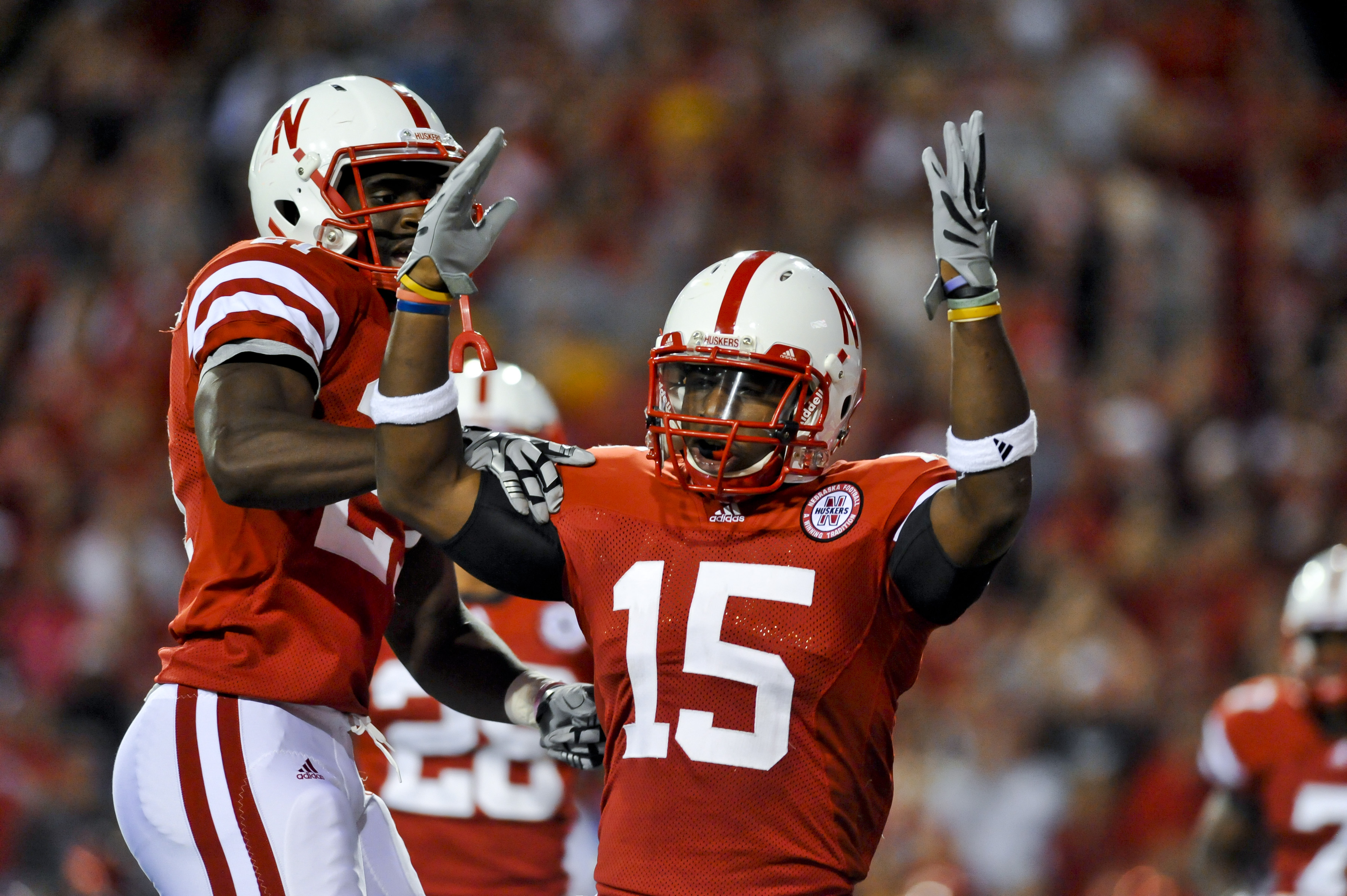 Aside from Daniel Thomas and the running game, Kansas State has been able to field a formidable secondary. The Wildcats rank No. 13 in the country at defending the pass.

This has proven to be their redeeming quality, as without the four interceptions and three resulting touchdowns, the Wildcats would likely have lost by now.

Nebraska’s secondary, however, is the elite and envy of the FBS. Eight individuals can be counted on to be put in mix-and-match scenarios to play in perfect harmony in not only the standard cornerback and safety roles, but also the “Peso” back.

Both team’s quarterbacks will be put to the test should they attempt the trap of throwing through either secondary, but Nebraska’s will always be a given loss for Coffman. 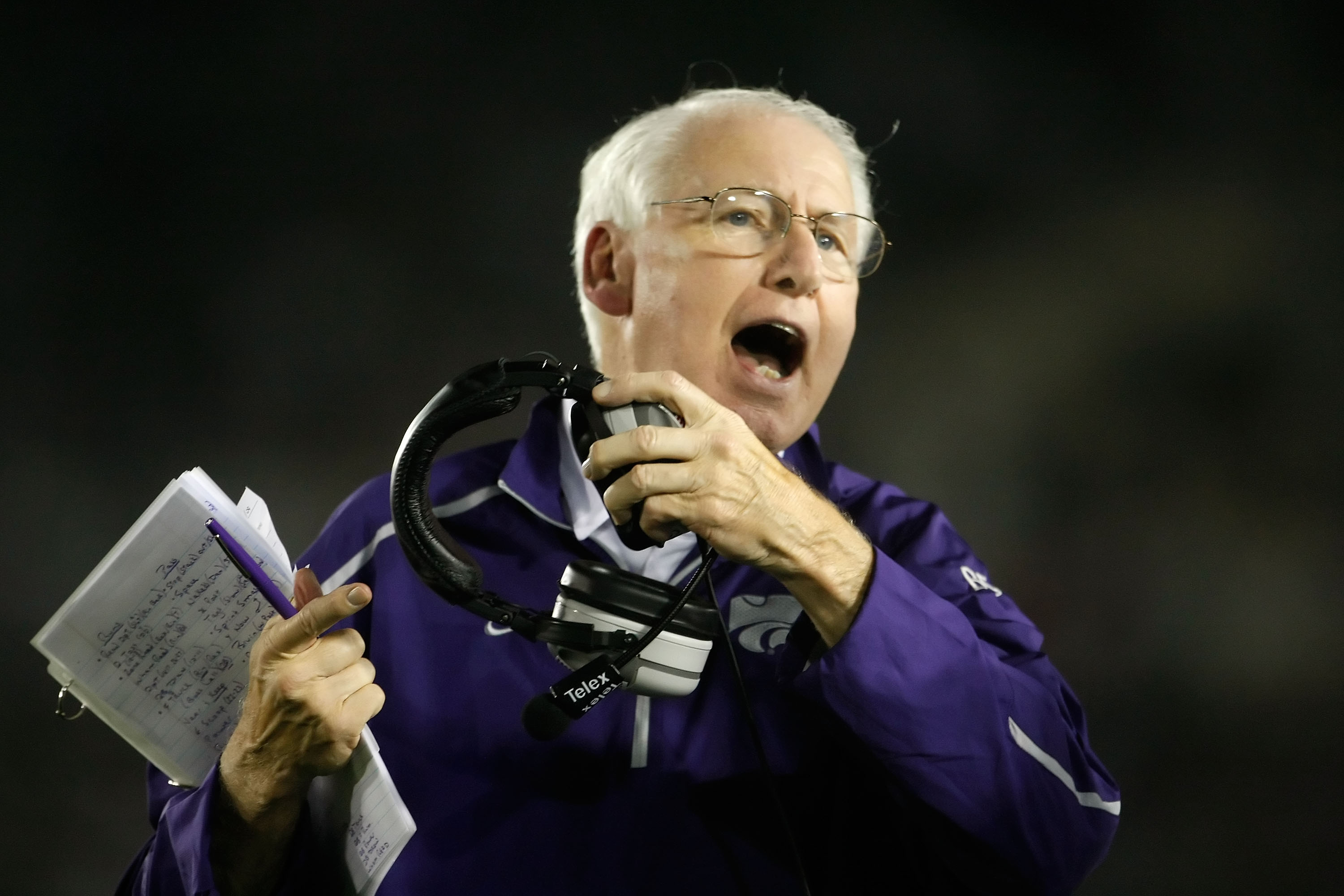 These two remember each other very well. In 2003, Nebraska lost to Kansas State, 38-9, on Senior Day. A game in which Bo Pelini thought Snyder was “padding the stats” a bit. Pelini was just an assistant then. Now, he is in charge.

Snyder had to rebuild Kansas State from a hapless do-nothing on the college football landscape into a championship-winning program. Pelini can empathize. Walking into his project, Pelini’s duties were to not only bring championship-style football back to Lincoln, Nebraska, but also to energize a polarized fanbase.

Since returning to the college game, Pelini welcomed Snyder back with a 17-3 defeat as his Blackshirts suffocated the Kansas State running attack just enough. That introduced Daniel Thomas to Pelini and perhaps the college football world.

Now, in front of a nationally televised audience with what should be an energized night in the Little Apple, Pelini has to face his 2003 tormentor in a stadium bearing his own name. Both teams have a lot to both gain and lose.

For Nebraska, if they can show they’ve stopped the bleeding and backs don’t just file through the Blackshirt defensive line, they send a message to the Big 12 and the rest of the nation. If they stuff KSU, they march back home and welcome the Texas Longhorns with the grin of a Cheshire cat.

If Kansas State should score the upset, however, they will have knocked off a Top-10 opponent, even further legitimizing a Top-25 ranking, making a strong case for Big 12 North champion, and perhaps a shot at the whole enchilada.