When he was signed in the 2008-2009 offseason, Juan Cruz was of the few Dayton Moore acquisitions met with widespread approval. Having waited to sign Cruz until the market shook itself out, Moore found himself nabbing Juan Cruz for a mere $6 million over two years with a club option that would bring that total to $9.5 million if exercised.

Granted, he was a Type-A free agent, so the Royals ended up forfeiting their second round pick, but no one seemed put off by this at the time.

Sure, he was in the NL and 73 of his innings pitched in 2006 were as a starter, but given the desert air/elevation he'd been playing in for those three years, it seemed reasonable to expect those numbers to translate over to a solid run in 2009.

It was also probably pertinent that for whatever reason the Diamondbacks only saw fit to hand the ball over the Cruz in mop-up duty. Of his 126 relief appearances, only 46 occurred when the D-backs were ahead or tied. Given that his signing was presumably to act in the capacity of a set-up man, a bit more experience in the role probably would have been preferable, but everyone pointed to the strikeouts to alleviate the minor concern such a fact caused.

Well, we all know what ended up happening to Juan Cruz in 2009.

In short, he struggled mightily.

Some of these struggles would seem to be tied to his fastball. His reliance upon his fastball dropped significantly regardless of whether you look at the pitch type figures provided by Baseball Info Solutions or MLB's PitchFX. While looking at the data provided by BIS (at the very least, it covers the span of Cruz's career), Cruz ranged from 64.7-68.1 percent fastball usage in every season from 2003-2008 but his abysmal 32.2 IP season in Oakland.

It wouldn't seem that such a minor drop in velocity should flip the value of his fastball on its head and then some.

When looking at horizontal and vertical movement on his fastball (thank you, FanGraphs), 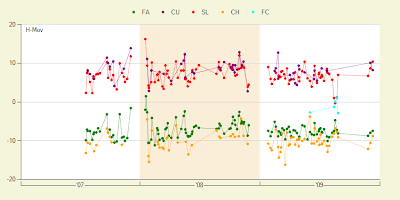 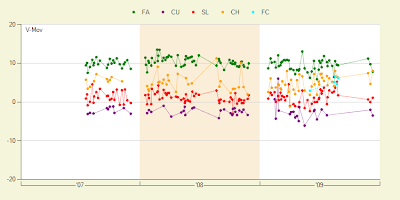 it does not appear as though there is a great deal of difference in movement from his two prior seasons as a reliever and 2009. Furthermore, his fastball still moved at least an inch more than the MLB average on both horizontal and vertical planes. Perhaps the explanation can be seen in the fact that his lost an inch of vertical movement on average from 2008 to 2009.

It did supplant that inch of lost vertical movement with a 1.1 inch gain in horizontal movement from 2008's -6.6 average, although my admitted lack of expertise on PitchFX surely leaves me lacking an explanation as to whether these shifts explain the insane drop in value he experienced in his fastball.

This sabermetrically semi-literate can just as easily chalk this drop in value to a simple change in leagues or the recession that set in toward the end of the 2008 season.

In 2007 and 2008, Cruz's repertoire was limited to almost entirely fastballs and sliders as he pitched in relief—92.6 percent of his pitches thrown in '07 and 95.4 percent in '08 were one of the two. His reliance upon his slider throughout his career makes sense as, in all of his seasons but one*, it was his most valuable pitch.

Obviously, if he was almost exclusively a fastball/slider pitcher in his last two seasons of relief in Arizona, and his percentages thrown of each dropped in 2009, then other pitches were reintroduced to his arsenal. Last season, batters saw him changeups at a much higher rate*, and he brought back the cutter (7.7 percent), which he hadn't thrown since last he was a starter.

The increased prevalence of these pitches could certainly be questioned were it not for their positive values of 2.9 wCH and 0.4 wCT.

When looking at his variety of pitches thrown, it was clearly his fastball that hitters had the easiest time with, as all of his other pitches were of positive worth.

Looking past pitch types, there is one more startling difference between his relief campaigns in Arizona and his 2009 season as a Royal. As a reliever in the desert, he induced an O-Swing% of 24.7 and 30.1 percent. These were both above his current career mark of 20.8, so perhaps expecting hitters to keep reaching outside the zone for pitches at that rate was unrealistic for 2009.

As it happened, hitters only reached on 19.2 percent of balls Cruz offered outside the zone last season.

While that was more or less in line with his career numbers, if not his two prior relief seasons, his O-Contact% was not. His career O-Contact% sits at 50.3 percent, while in 2007 and 2008 it was 45.3 and 50.3 percent, respectively. As a Royal, that rate took an absurd jump to 63.6 percent, which also helped bring about a rise in hitters' Contact% to 77.9 percent. Since his Contact% in his two previous seasons was 69.9 and 66.0 percent, there is clearly something wrong here.

It is entirely possible that I am making far too much out of what can be solely chalked up to a small sample size and a run of bad luck. After all, relief pitchers are one of the least predictable sets of players from year to year. Perhaps it can all be attributed to his move from the weaker Senior Circuit.

All of these possible reasons are simply trying to make sense of the fact that a previously effective relief pitcher found himself proud owner of a 77 ERA+ at the end of the 2009 season. What exactly rendered him ineffective?

Was it all because he can't handle the pressure? It was the first season since 2002 that his Average Leverage Index peaked over the 1.000 mark.

Was it all related to an ineffective fastball?

There are a lot of questions. We can take a little solace, albeit premature, at the fact that nearly every projection system sees a rebound for Cruz in 2010. It would be disappointing to see a Type-A free agent signed only to have him implode for two seasons, thus flushing a second-round draft pick for some awful relief pitching.

Hopefully, 2010 sees a return of a positively valued fastball and the rest of the pieces fall into place for Cruz. If that can happen, one has to think with an effective arsenal of three other pitches, Cruz could actually be a dangerous reliever and the key to bridging to Joakim Soria.

Sure, it'll optimistically help lead to 45 Soria saves, but we Royals fans love The Mexicutioner...