No. 16 Notre Dame ended its regular season with a 45-24 win over host Stanford on Saturday.

Fighting Irish quarterback Ian Book completed 17 of 30 passes for 255 yards and four touchdowns. Two of them went to wideout Chase Claypool, who had three receptions for 63 yards.

Notre Dame struggled in the first half, finding itself down 17-7 after Cardinal quarterback Davis Mills found wideout Michael Wilson for a 27-yard score with 9:29 left in the second quarter.

Book responded with two touchdown passes, however, with one going to Tommy Tremble for six yards and another headed to Claypool from 41 yards out.

The two teams then traded touchdowns to close the scoring, with Stanford running back Cameron Scarlett converting on a one-yard rush and Khalid Kareem recovering a fumble for a touchdown following a Adetokunbo Ogundeji sack.

The 10-2 Fighting Irish end their regular season on a five-game winning streak. The 4-8 Cardinal finish their campaign on a four-game losing skid.

Notre Dame started out sluggishly after scoring a touchdown on its opening possession, punting the ball three straight times to Stanford after unsuccessful drives.

The Cardinal offense went to work in response, mounting a 16-play, 82-yard drive that ended with a field goal before Michael Wilson's 27-yard touchdown catch to help give Stanford a 17-7 lead.

The Fighting Irish soon got a huge break, however, when Isaiah Foskey blocked a Stanford punt to give Notre Dame the ball at the Cardinal 1-yard line. The Fighting Irish scored three plays later off a Tommy Tremble touchdown catch.

Notre Dame couldn't bank on great special teams play to carry the day, though, as the offense needed to step up and take control.

The Book-led unit did just that, with the quarterback's connection with Chase Claypool proving to be the difference.

The Fighting Irish forced a Stanford punt following the touchdown. Book immediately went to work, finding tight end Cole Kmet for 21 yards before connecting with Claypool on passes of 14 and 41 yards, the latter of which resulted in one of the best plays of the day thanks to the wideout's ups.

Chase Claypool went ALL THE WAY UP for this @NDFootball TD 🙌 https://t.co/gdEnlRHakg

Pete Sampson of The Athletic provided this comment after Claypool defied gravity to help give Notre Dame a 21-17 halftime lead:

Those targets were just the first and second on the day for Claypool, but his number would be called once again.

Both teams traded a pair of empty possessions to start the second half, but the Fighting Irish passing game got it going yet again on an eight-play, 86-yard drive.

A Braden Lenzy 43-yard reception moved Notre Dame to midfield, and another Claypool touchdown ended it from eight yards out.

The 6'4", 229-pound Claypool has an NFL future waiting for him, as partially evidenced by his 59-catch, 891-yard, 12-touchdown stat line from this season.

As for now, he and Book were the catalysts for Notre Dame's fifth straight win and 10th of the year, marking the third straight year where the Fighting Irish have posted double-digit wins.

Stanford will be home for bowl season after coming short of the six-win benchmark for postseason eligibility, but Notre Dame will take part in an extra game, which is to be determined.

Brett McMurphy of Stadium placed the Fighting Irish in the Camping World Bowl against Iowa State in his Nov. 25 projection. 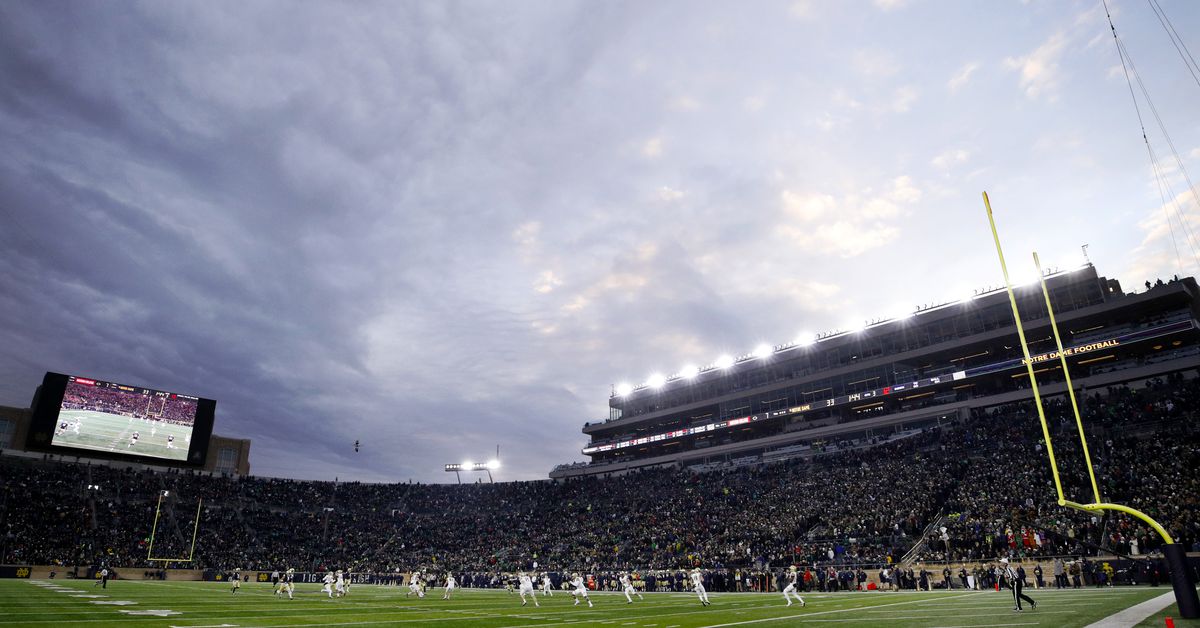