Oklahoma has an opportunity to regain control of the Big 12 and creep back into the College Football Playoff conversation Saturday.

The Sooners visit undefeated Baylor in what could be the first of two meetings in the next four weeks.

If Lincoln Riley's team wins, it would put both squads at one conference loss with two games to play. If they win out, a Big 12 Championship Game clash awaits.

If the Bulldogs, Golden Gophers and Sooners pick up Top 25 wins, the discussion about the best one-loss team will intensify. 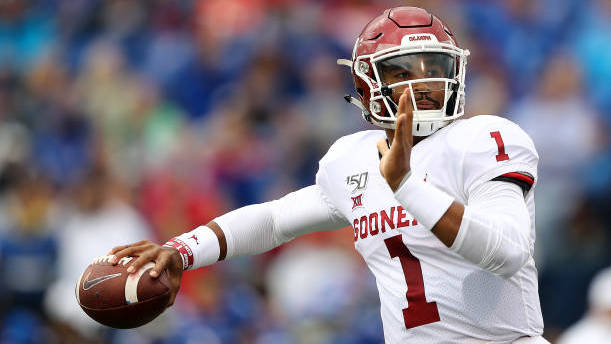 Odds via Vegas Insider; predictions against the spread in bold.

For tickets to Michigan State at Michigan, go to StubHub.

Bleacher Report has an affiliate marketing relationship with StubHub. We will receive revenue from your purchase.

For tickets to Georgia at Auburn, go to StubHub.

Oklahoma has scored the most points in Big 12 play and Baylor has allowed the fewest points in conference action.

If Jalen Hurts can solve Baylor's defense, it seems like the Sooners could roll to a road victory that could boost it a few spots in the polls.

Lincoln Riley's team failed to reach 40 points once. It was six points short of the mark in its October 12 win over Texas.

The Sooners experienced some trouble in their pair of Big 12 road trips. They managed seven first-quarter points against Kansas and faced a double-digit deficit in their loss to Kansas State.

But Baylor struggled to finish off its three home conference foes. It beat Iowa State by two, knocked off Texas Tech in double overtime and won a defensive battle versus West Virginia.

In those games, the Bears produced 73 points and they were limited to nine in regulation against TCU.

To win Saturday, Baylor has to keep up with Oklahoma's offense, and while that is possible against a Sooners defense that allowed Kansas State and Iowa State over 40, its season-long production suggests otherwise.

The Baylor defense also has not faced a quarterback like Hurts, who can hurt opponents with his arm and legs.

In all but one game, Hurts achieved a passing and rushing touchdown. In Week 11, he burned Iowa State for five total scores.

How many times Oklahoma needs to score is dependent on its defense that allowed one opponent over 30 points before the defeat at Kansas State.

Charlie Brewer and the Bears offense reached 40 once in Big 12 play, so if that trend holds up, the Sooners could be able to limit the hosts to 20-25 points.

If that is the case, Oklahoma could easily cover. Expect the Sooners to pile on to the score to make a potential win stand out more to the playoff selection committee.

Iowa has not proven in recent weeks that it is a worthy favorite against Minnesota.

The Hawkeyes produced 37 points in three Top 25 matchups, with 22 of them coming in the Week 11 loss to Wisconsin.

Those numbers suggest a low-scoring affair will occur at Kinnick Stadium, but Minnesota's offense may prove otherwise.

Tanner Morgan is coming off a 339-yard, three-touchdown outing in which he completed 90 percent of his passes.

Since the start of October, the Minnesota sophomore has 11 passing touchdowns and two interceptions.

During the same span, Iowa quarterback Nate Stanley threw for four scores and was picked off five times.

The Minnesota secondary, led by Antoine Winfield Jr., could feast on Stanley, just like they did against Penn State's Sean Clifford Saturday.

Winfield has seven of his team's 14 interceptions and his teammates on the interior are capable of putting Stanley under pressure to cause turnovers.

Linebacker Carter Coughlin and defensive linemen Sam Rehner and Esezi Otomewo lead the Golden Gophers in sacks, and they should have a few backfield meetings with the Iowa signal-caller.

If the Big Ten West leader forces Stanley into bad decisions, like Penn State and Michigan did, it could be a long afternoon for the Hawkeyes.

A victory would push P.J. Fleck's side closer to the Big Ten Championship Game and a potential matchup with Ohio State for a playoff berth.

Auburn HC has taken the Tigers to a Natty and beaten Bama 3 times, but can never seem to avoid the hot seat ➡️