As the midway point of the 2019 season nears, only the SEC has a greater number of College Football Playoff possibilities than the Big Ten. And thanks to a favorite-filled group of victories in Week 6, the conference has set itself up for a dramatic October.

Saturday was merely the appetizer to a season-shaping month.

Ohio State earned the marquee victory of the night, toppling No. 25 Michigan State behind a dominant second-quarter performance. That's becoming a familiar theme for the No. 4 Buckeyes, who boast a 134-20 advantage during the frame in six games.

Earlier in the day, 19th-ranked Michigan pulled out a 10-3 victory in a slugfest with No. 14 Iowa. Wisconsin and Penn State―both Top 15 teams―rolled over inferior opponents, as they should have.

Each of those six schools entered Week 6 ranked in the AP Top 25. Before the end of the month, they're all slated to face at least one of the other six. Michigan will host Notre Dame too.

The pretenders are about to be separated from the contenders.

Ohio State clearly stands atop the Big Ten hierarchy, which can be organized into three tiers among the top programs. Wisconsin and Penn State are close behind with 5-0 records, followed by Michigan, Iowa and Michigan State―each with one Big Ten loss.

The Buckeyes are the most balanced team, and the offense has unmatched upside. They've exploded for a 20-point quarter in every game this season. Ohio State scampered for 323 yards Saturday against a Michigan State defense that had surrendered 279 total rushing yards in five previous contests.

Throw in a defense that hasn't surrendered more than 10 points since Week 1, and OSU is an undeniable national title threat.

But after traveling to Northwestern (Oct. 18), the Buckeyes will host Wisconsin (Oct. 26) in a potential preview of the Big Ten Championship Game. The winner will be declared the favorite to represent the conference in the CFP.

That is, unless Michigan State upsets Wisconsin first.

While the Spartans are flawed offensively, the defense had allowed only 3.9 yards per snap to its first five opponents. They are fully capable of sticking with the Badgers (Oct. 12) and frustrating Penn State yet again. Over the last five years, the Spartans have defeated Penn State four times.

Granted, before the Nittany Lions can think about the Oct. 26 matchup, they have two major obstacles in the way. Penn State heads to Iowa (Oct. 12) and hosts Michigan (Oct. 19).

First-year starter Sean Clifford has played wonderfully, but he's about to face three excellent defenses in a row―with two on the road. This is a defining stretch for Clifford and the Nittany Lions, who could either be a Top Five team or effectively eliminated from Big Ten and national races by November 1.

Penn State deserves to be favored when Michigan comes to town, and Jim Harbaugh's record in Top 25 road games (1-6) is horrid. Nevertheless, the Wolverines must be taken seriously because of a defense that can be terrific. Beyond the inexcusable showing at Wisconsin―and by no measure should that be overlooked―U-M has limited each opponent to fewer than five yards per snap.

Will the Wolverines be adequately prepared? Perhaps not. Recent history is unkind. But they absolutely have enough talent to compete with Penn State and Notre Dame (Oct. 26), even if only to complicate or spoil one of those teams' seasons.

Michigan knocked off Iowa, yet Kirk Ferentz's squad is still in decent shape. If Ohio State is helpful and topples Wisconsin, the Hawkeyes aren't finished. As long as they go 2-1 the rest of the month, they'll enter November with a chance to claim a decisive tiebreaker in a showdown at Wisconsin.

Is it likely? No. Elite defenses can cause a bit of havoc, though.

The last three Saturdays in October won't decide the Big Ten champion or the division winners, and it's no surprise that several teams will be eliminated soon. That's bound to happen every year.

However, the league hasn't officially lost a realistic contender before it should. The number of marquee games all around college football is set to rise significantly, and the Big Ten has positioned itself to attract a large share of that attention. 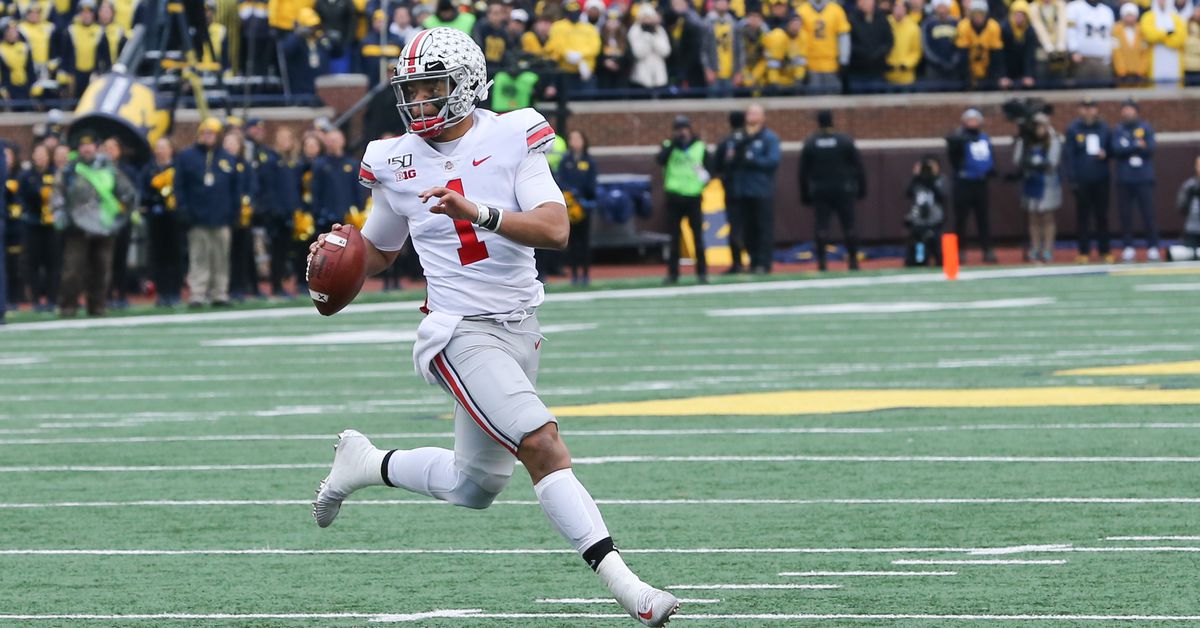 Risk acceptance, protocols: Gene Smith on what needs to happen

Risk acceptance, protocols: Gene Smith on what needs to happen