The early discussion among scouts for the title of top 2020 NBA draft prospect has begun. North Carolina's Cole Anthony is a popular mention, and Memphis' James Wiseman has support, as well.

Neither stretch nor spark the imagination like Georgia freshman Anthony Edwards, though.

Only a select few NBA players who play predominantly at shooting guard possess Edwards' 6'5" size and 225-pound frame. He won't even turn 19 until after the 2020 draft. Explosive athleticism enhances his physical profile a notch further.

But credit gradual skill development for his rise and transformation from attacker and dunker to advanced shot-creator, three-level scorer and capable playmaker.

He's steadily moved up rankings since his second year of high school, and his reputation took off midway through 2018 during the Under Armour Association. He capped off April's session with a 43-point performance before eventually going on to win UAA MVP later in the summer with Atlanta Xpress. 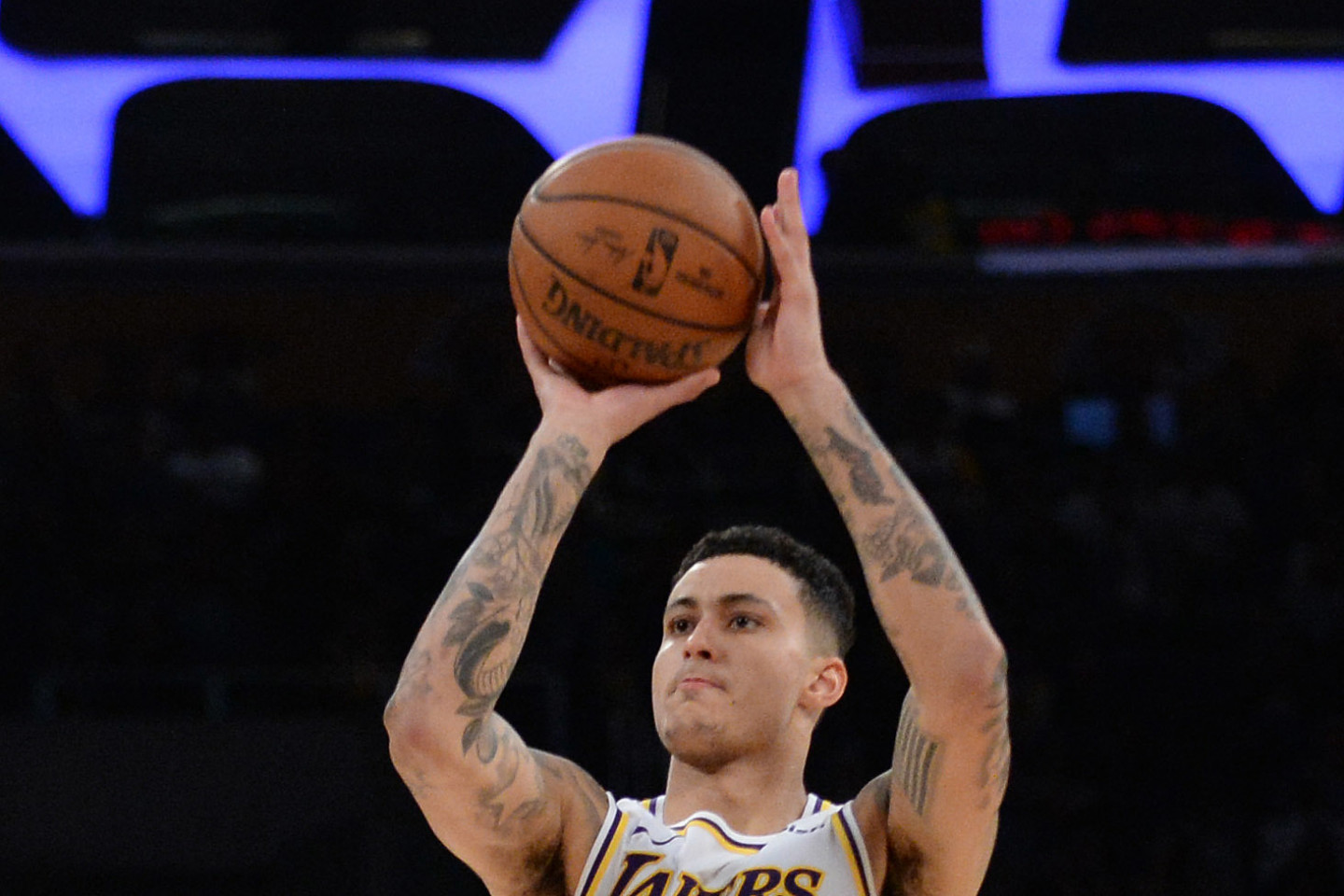 In June 2018, Edwards led the NBPA Top 100 Camp in scoring. That August, he was named co-MVP (with Anthony and Villanova-bound Bryan Antoine) at Stephen Curry's SC30 Select Camp. He'd unsurprisingly reclassify and go on to average 25.7 points, 9.6 rebounds, 2.7 assists, 2.1 steals and 1.1 blocks as a 17-year-old senior for Holy Spirit Prep.

But scouts aren't allowed in gyms for high school or AAU. The last two times they saw Edwards, he scored 12 points on eight shots at the 2019 McDonald's All-American Game and 21 points in 18 minutes at the 2019 Jordan Brand Classic:

His improved perimeter game has become a clear, notable takeaway that's strengthened his credibility as an elite NBA prospect.

Edwards' power and explosiveness regularly translate to easy baskets in transition. His open-floor ball-handling creates more opportunities at the rim, and he shows good control with both hands while dribbling at full speed. He doesn't need a straight-line path to finish on the break as he's capable of weaving through traffic with violent changes of direction.

He'll use athleticism, acceleration off hesitations and handles to put pressure on defenses before they can set early in shot clocks. His burst also serves him well for attacking in the half court, particularly when paired with his ability to execute quick crossovers, in-and-outs or blow-by steps off hang dribbles that freeze defenders.

An obvious threat to get downhill, he earns himself high-percentage layup and dunk attempts, usually by bouncing high off two feet, which is his preferred launch method. He can explode upward for a finish above the cylinder before putting a foot in the restricted area, allowing him to beat rim protectors to the spot:

His progression as a pull-up and step-back shooter has still been the primary way he's elevated his scoring. With a green light and budding confidence in his perimeter game, he can get carried away with low-percentage hero shots. But at this stage, more stock should go into what he's become capable of than correctable shot selection that needs fine-tuning.

Edwards has developed effective methods for creating his own shot away from the basket with crossovers, jab steps, behind-the-back moves and in-and-out dribbles to distract and build rhythm before elevating into his jumper:

He's developed step-back footwork, plus the shot-making skill to convert falling away:

He separates into rhythm-dribble jumpers out of isolation or ball-screen situations, mostly from behind the arc, as opposed to mid-range zones where there is more traffic:

Still more of a shot-maker who tends to lean on deeper dribble jumpers than a pure shooter, Edwards is a long shot to top the 35 percent mark from three as a freshman at Georgia or rookie in the NBA. He also hasn't been great from the free-throw line (68.0 percent in AAU), which is a potential negative indicator.

But this early, it's more about the makes than the misses.

Edwards already seems on or ahead of schedule compared to similar NBA 2-guards when they were freshmen: Donovan Mitchell (18-of-72 from three at Louisville), Victor Oladipo (8-of-26 at Indiana) and Bradley Beal (63-of-186 at Florida).

Flashes of playmaking have led to some optimism about Edwards' potential as an initiator and combo guard. He's made a habit out of delivering long passes down the floor in transition. And when he sees an opportunity, he's shown a willingness to set up teammates off ball screens and penetration.

Edwards ultimately draws a lot of attention when he has the ball on the move, which leads to assist opportunities. Still, it's unrealistic to expect high assist averages early in his career given his role and scoring mentality.

Though comfortable executing specialty moves with space to operate, he can stand to improve his handle when pressured or maneuvering in tight spaces. His ball control weakens when he's forced to multitask, seeing what's in front of him and figuring out what move or shot he should attempt:

Edwards is vulnerable to losing the ball when going up for a finish in a crowded lane. He could also use more of a runner and floater as he moves to college and the pros.

As mentioned earlier, he also tends to settle for highlight jumpers, common for a high school scoring machine trying to show he's expanded his repertoire:

Defensively, he's proved an exciting playmaker, able to jump passing lanes or block shots from off the ball. But the steals and flashy rejections don't always equate to engaged team defense.

He'll enter a situation at Georgia with pros and cons for an incoming freshman preparing for a one-and-done season.

On one hand, he'll immediately take on a featured role, and head coach Tom Crean has previously mentored NBA 2-guards Oladipo and Dwyane Wade. There shouldn't be any shortage of opportunities to produce.

Already, Crean has said all the things you want to hear about "moving without the ball," "being able to play at a really intense level on both ends of the floor consistently" and "[helping] him be a pro."

However, the Bulldogs are coming off a 2-16 SEC record, and they just lost leading scorer Nicolas Claxton to the Brooklyn Nets in June's draft. Last year's assist leader (William Jackson II) averaged 2.1 per game, and he graduated. This year's group will rely heavily on Edwards for creation.

Georgia's roster won't make it easy for the projected high-usage freshman to be efficient. Learning to score off the ball, like Crean mentioned, will be critical as Edwards answers defenses keying on him with extra pressure and double teams.

During one of the Holy Spirit Prep games I scouted live at the Hoophall Classic in January, the opponent silenced him from start to finish. There will likely be more games early in his career during which he has trouble figuring out how to generate offense within the flo and without isolation or spaced pick-and-roll ball-handling possessions.

Maybe the biggest question he'll end up facing will concern his impact on winning, especially if Georgia struggles to make a case for the NCAA tournament.

However, can't-miss talent still figures to win over scouts and persuade them to overlook Edwards' win-loss record or consistency during one NCAA season of roughly 35 games.

Edwards Versus the Field

Anthony could end up the safer choice for some, assuming he puts up monstrous numbers running the show for a top-ranked program. Scouts have probably seen more of him at various camps and Oak Hill, which lost in the GEICO High School Nationals semifinals. Plus he thrived at the Nike Hoop Summit, and Edwards wasn't invited after he turned down invites to USA Basketball training camps, per ESPN's Jonathan Givony.

Anthony will start the year No. 2 on our board with only his decision-making as a lead ball-dominator holding him back.

I'm not as high on Wiseman, though it's understandable that some could have him No. 1 in September. Athletic, 7'1" and 240 pounds, Wiseman possesses high upside at both ends with budding inside-out offensive skills and more defensive potential than the top guards or wings.

LaMelo Ball isn't far behind, and he's off to an encouraging start during exhibition play in Australia. Israel's Deni Avdija is our No. 3 prospect after his MVP showing at the U20 European Championships this summer.

But Edwards starts at No. 1 with can't-beat positional tools and athleticism, a level of skill that's already high but still rising and enormous room to improve based on his age and fixable weaknesses.