When Feleipe Franks was carted off the field with what we later learned was a likely season-ending dislocated ankle, it instantly felt like AP No. 9 Florida's quest for the 2019 College Football Playoff left with him.

The Gators were down 21-10 on the road late in the third quarter and had just turned the ball over on downs to a Kentucky team that dominated in the trenches for most of the night. Perhaps Franks could have dipped into his bag of tricks for some sort of miraculous comeback from that scenario, but throwing an inexperienced backup quarterback into that fire should have been a disaster waiting to happen.

Kyle Trask was up for the job, though, and he just may save this season for the Gators after he led them to a 29-21 comeback win Saturday.

"It was obviously a really hard time for the team because he's a great leader for us," Trask told ESPN's Molly McGrath after the victory. "But at the end of the day, we're still here to win the game."

The redshirt junior—who was, by far, the lowest-rated player in Florida's 2016 recruiting class and who previously had not attempted a pass in a game decided by fewer than three touchdowns—looked unfathomably comfortable from the outset. 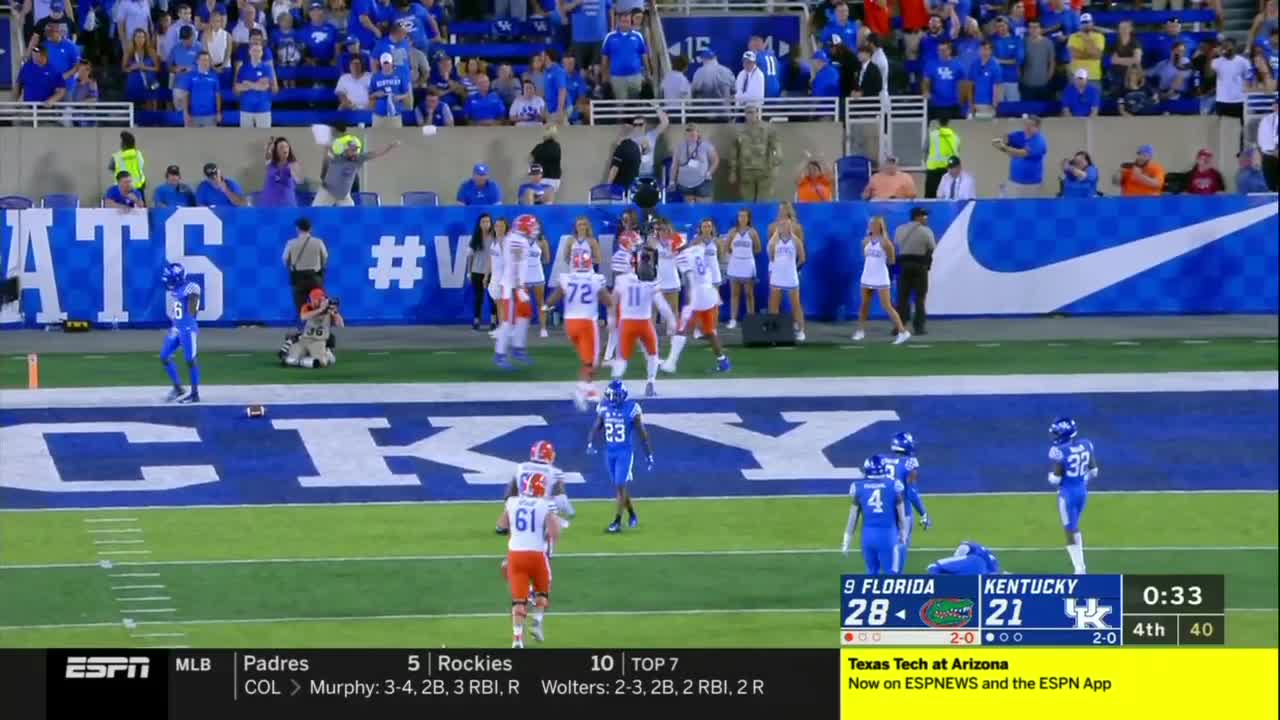 Trask's first four snaps were all successful passing plays, as the Gators marched 54 yards in less than two minutes. Though he wasn't credited for anything on Lamical Perine's rushing touchdown, which got the Gators back to within one score, he made it possible with impressive awareness on what looked like a broken play:

Trask with a gorgeous pitch to his back, easy 6 https://t.co/ea1eBS3kT2

On Florida's subsequent possession, Kentucky got a phenomenal bounce on a punt to pin Trask inside the Gators' 5-yard line. Unfazed yet again, he led the offense to three first downs, flipping the field and putting the pressure back on the Wildcats.

After a Sawyer Smith arm-punt and a pair of 15-yard penalties against Kentucky's defense, Trask connected with Kyle Pitts on a 30-yard strike to get inside the UK 10. On a designed keeper from the Kentucky 4, Trask finished the comeback with what proved to be the game-winning rushing touchdown.

Florida tacked on a 76-yard rushing touchdown in the process of outscoring Kentucky 19-0 in the fourth quarter.

Trask finished 9-of-13 for 126 yards along with that four-yard, six-point run. No sacks, no interceptions, no fumbles and no nerves displayed.

Solid work from a quarterback who probably wasn't expecting to take a single snap.

"Next man up" has been an unfortunately common refrain among SEC East quarterbacks coaches this season. South Carolina lost senior quarterback Jake Bentley to a fractured foot in Week 1. Kentucky's Terry Wilson suffered a torn patellar tendon late in last Saturday's win over Eastern Michigan. And now Florida needs to adjust to life without Franks for the first time since 2016.

"We feel we have three starting quarterbacks in our room," Florida head coach Dan Mullen told McGrath. "Now everybody got to see what type of quarterback we knew [Trask] was the whole time."

Trask had a relief performance for the ages in Lexington, but will he even be the starter next week against Tennessee?

As Mullen insinuated, there's a third man in the mix who didn't see the field against Kentucky—but who most assumed would become the starter if Franks ever relinquished the title. Emory Jones was a Top 100 recruit last year and one of the prized commitments of Florida's 2018 class.

Jones is a dual-threat guy, though, so it's not much of a surprise that the Gators opted to plug and play the backup who more closely matches Franks' skill set. Even though the plays Florida was calling before Franks' injury weren't working well, it would've been an abrupt, likely unsuccessful in-game pivot to the Jones-heavy packages.

But give Mullen and Co. a full week to plan how to use Jones, and it's a safe bet he'll be heavily involved in the offense.

The big question then becomes: Will the law firm of Trask and Jones be enough to keep Florida in the hunt for the playoff, given the lack of a star running back and an offensive line that was the team's biggest weakness long before the season began?

With all due respect to Tennessee, next week's home game against the Volunteers and the subsequent one against Towson will serve as a pair of warm-up affairs for the real challenges. Florida hosts No. 8 Auburn and travels to No. 4 LSU on the first two Saturdays of October, followed by the World's Largest Outdoor Cocktail Party against No. 3 Georgia on Nov. 2.

Even with Franks, the Gators would have had a hard time winning at least two of those three games. Without their leader, even a 1-2 projection feels optimistic.

Then again, who thought at the beginning of the fourth quarter that Florida had any chance of coming back to beat Kentucky?

Every season, there seems to be one college football team that has a horseshoe up its you-know-what on a nearly weekly basis for three months, snatching enough victories from the jaws of defeat to at least play in a New Year's Six bowl, if not the playoff. Between the way the Gators won this game and the ugly opener against Miami, they just might be this year's unlikely contenders.