"You have no idea," says LSU safety Grant Delpit.

"So we're in spring practice," Delpit begins, and he stops and smiles at the thought of his tough-guy story about Tigers quarterback Joe Burrow.

But something doesn't feel right.

"He got hit, he thought late, on a play," Delpit continues. "They call [quarterback] run on the next play, he comes around the end and he goes right after the guy he thinks hit him. Running right at him, and the next thing you know, we're all fighting, offense and defense."

It doesn't matter who you are. An opposing defender, a teammate in practice, a projected top-six pick in next year's NFL draft, like Delpit. 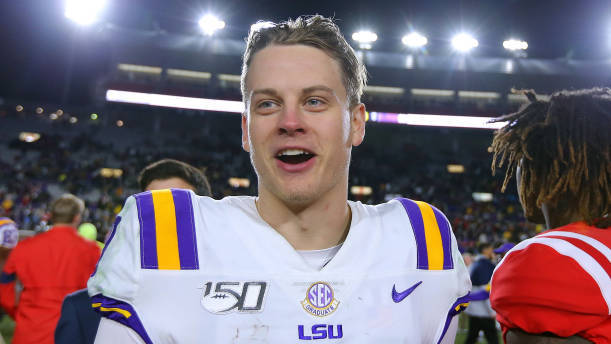 Joe Burrow is coming. Get out of the way.

"There was a little fight after I got hit late that first time, but I wasn't part of it," Burrow explains, and he's starting to get lathered up right now just thinking about it. "So, yeah, I gotta start another fight. Next play, I started another one. I have no idea how long it lasted. But we were getting after it."

That, more than anything, is why we're where we are today, with a loaded LSU team rolling into Texas this weekend and staring at a statement game with a tough-guy quarterback who has changed the way they think and act.

We barely heard from LSU this offseason. No problems, no drama. None of those questions of what could be from seasons past.

All those years of everything in place except the quarterback, all those wasted seasons with all that NFL talent—only to come up short while chasing Alabama in the SEC. And all that changed with the addition of one tough and talented player in the spring of 2018.

Just how important was it when Burrow, the hardscrabble grinder from Athens County, Ohio, found his way to the South and caught on with a program desperate for real, genuine attitude?

Burrow hears Orgeron's words, and his head drops. He has just returned from a trip to Athens, where so many live below the poverty line and have never made it out. A place that can swallow hope.

He sat for three years at Ohio State, backing up Braxton Miller and J.T. Barrett and Cardale Jones. Dwayne Haskins was next in line when Burrow finally bailed.

He never wanted to go home to Athens during those three years at Ohio State, because he'd only hear the inevitable: Even he, a kid from a proud football family, was swallowed. May as well come back home.

Now he's nervously rubbing a big oak table in the LSU football offices, and the toughest guy in college football is about to reveal a side few see.

"I didn't save them," he says, his eyes beginning to well. "They saved me."

The momentary silence is overwhelming.

"Now we're getting ready to make a run at this thing, the whole thing, and who knows what will happen with my career after this."

He knew it was a bad throw in last year's Fiesta Bowl as soon as it left his hand. What he didn't know as he tried to run down UCF cornerback Brandon Moore to rectify his mistake was that defensive tackle Joey Connors was zeroing in on him.

Connors took Burrow down with a blindside hit. A dirty hit. Burrow was decleated and driven into the ground. Moore turned the poor throw into a 93-yard touchdown return, and suddenly, LSU was down 14-3 early, looking like it might be the latest Power Five team taken down in a major bowl by giant killer UCF.

On the sideline, Orgeron screamed at his offensive staff to get backup quarterback Myles Brennan ready to play. Burrow slowly pulled himself off the turf, walked to the sideline and got in Orgeron's face.

"You're not taking me out of this game!" he screamed.

Then he went out and completed 19 of his next 28 passes for 363 yards and four touchdowns—and no more interceptions—and a depleted LSU team beat UCF and wrapped up its first 10-win season since 2013.

"We put two full IV bags in him after the game," Orgeron says. "He's not one of those fake tough guys. He walks it every day."

When Burrow was leaving Ohio State, he chose LSU because he wanted to play in the SEC and he wanted a program that needed him.

He knew about the shaky history of LSU quarterbacks since the national championship season of 2007 (no All-SEC selections, 84 INTs) and knew he had to shake it up from Day 1.

He arrived in June of 2018, and his introduction to the team was set in the heart of the bayou summer: 95 degrees, 100 percent humidity. He blew away his teammates, winning nearly every conditioning test.

"I remember thinking, Who is this guy?" says LSU center Lloyd Cushenberry III. "The next thing you know, he's in the locker room, and he's hanging around the offensive linemen. You know, those quarterbacks usually stick together. Not Joe. He belongs with us."

Teammates can tell when someone on the field with them isn't genuine. More to the point, they can tell when someone is. But when you grow up around football—when your dad was a longtime successful defensive coordinator at Ohio and your brothers played at Nebraska—lacking an understanding for how to thrive within a team environment doesn't tend to be a problem.

Those who work and lead and set an example for others are those who find success.

A few months after that day in June, Burrow was picking himself off the turf in the season opener against eighth-ranked Miami and its athletic and dynamic defense and persevering in a big win over a Top 10 team. Two weeks after that, he led a game-winning drive in the final minute at No. 7 Auburn.

The locker room after the game was a madhouse.

"That's when everyone was like, Hey, we got something here," Delpit says.

After years of the unknown and uncertainty with Jordan Jefferson and Ryan Perrilloux, and Brandon Harris and Danny Etling, and every quarterback in between, LSU finally knew what it had at the most important position on the field.

Someone who could win big.

"I didn't consciously try to be someone different," Burrow says. "A lot of coaches try to tell people what kind of leader they should be, but everybody is kind of their own leader. Tom Brady's leadership isn't the same as Matt Ryan's. Everyone has their own secret sauce. You can't steal someone else's secret sauce. If Burger King tried to make Cane's sauce, it would be crap.

"Everyone has their own. You just have to find yours."

The Tigers, too, have clearly found their secret sauce.

"It's more than their ability to throw the ball consistently now," says one SEC coach. "It's Burrow's attitude; they're feeding off it. He has made them the most dangerous team in the league."

According to a 2016 report, 30 percent of Athens County’s residents live below the federal poverty line.

The lung cancer rate is higher in Athens County than any state in the nation.

The opioid crisis led to babies being born addicted to drugs at five times the national rate.

High school athletes just don't leave Athens for Power Five schools. The talent level isn't there. It's just about unheard of for a native son of Athens to go play at Ohio State.

So when those first three years at Ohio State led to nothing for Burrow—when one of the few guys to make it out couldn't make anything from it—it was devastating.

Then he went back this past summer. He talked to the local middle school and spoke to kids about making good decisions and making the most of what you have.

The local liquor store had a marquee that read, "Go Joe." GiGi's Country Kitchen, where Joe and his family ate so many meals together, had one too.

For the first time in four years, it was good to be home again.

"When I was eight years old, I didn't decide, 'Hey, I'm going to be a tough guy.' It doesn't work that way," Burrow says. "My family was fine, but over half of our school was below poverty level. Growing up around people who don't have a lot, it kind of gives you perspective. It makes you want to go harder, be tougher."

He's getting lathered up again now, and it has nothing to do with winning games or cheap shots or trying to change the culture of a position at an SEC heavyweight. This is about life.

"A lot of kids where I'm from ... they don't get a lot," Burrow says. "It's sad. There were kids who had to wear the same set of clothes to school every day and got made fun of because that's what middle and high schoolers do to each other. Looking back on it, that really sucks.

The Mannings know tough. Archie played for years in the NFL for some truly awful Saints teams and got beaten up season after season.

Peyton and Eli each lasted more than 15 years in the NFL, both dealing with countless injuries, some career-changing. So it should come as no surprise that the Manning family reached out to Burrow during the family's annual passing academy, held in June in Thibodaux, Louisiana, to offer some advice.

Learn to get on the ground. Protect yourself. Extend your career.

"Hopefully the Mannings will have a little more impact than my request," says Jimmy Burrow, Joe's dad and a longtime college assistant coach. "It's just part of who he is. In his mind, if you're the quarterback, that doesn't give you any right to not think you need to be physical and initiate contact. But they're trying to get him to be a little smarter about it."

That might be difficult considering how the LSU offense is evolving. When Joe Brady arrived this year from the Saints to be LSU's new passing game coordinator (it's Brady's offense), he focused on making changes to spread the offense from sideline to sideline and allowing Burrow to read coverages and throw more.

It will also include specific quarterback run sets, where Burrow will be running quarterback power- and zone-read plays.

"It's the offense we ran in high school and very similar to what we ran at Ohio State," Burrow says.

It's also similar to what LSU tried over the last month of the 2018 season after an embarrassing 29-0 loss to rival Alabama in the first week of November. The Tigers opened up the offense, and Burrow took control.

In the nine games leading up to and including that Alabama loss, Burrow had a total of six passing touchdowns, with four interceptions and a 53.5 percent completion rate.

In the four games after that, with the offense opened up, he had 10 passing TDs (along with three rushing) with one interception and completed more than 66.9 percent of his passes.

That's why Orgeron and the LSU players were so confident this offseason. And it's why after beating Georgia Southern 55-3 to open 2019—with Burrow completing 23 of 27 passes for five touchdowns and no interceptions—the Tigers will roll into Austin, Texas, this weekend as tough and dangerous as they've been since they won it all in 2007.

"I like to think of myself as an offensive lineman," says Burrow. "I relate to them. The offensive line is the heartbeat of the team."

Joe Burrow is coming, everyone.

Get out of the way.