The Milwaukee Bucks had an excellent 2018-19 campaign. They won an NBA-best 60 games during the regular season, reached the Eastern Conference Finals and watched as superstar Giannis Antetokounmpo elevated his game and was named league MVP.

Still, the Bucks have unfinished business after winning the first two games of the Eastern Conference Finals against the Toronto Raptors before losing the next four against the eventual champions. It's a title or bust for the Bucks this season.

They'll largely bring back the same group after re-signing Khris Middleton, Brook Lopez and George Hill. They also bolstered their bench with the signings of Wesley Matthews, Robin Lopez and Kyle Korver.

But there were losses. Malcolm Brogdon is now a member of the Indiana Pacers after a sign-and-trade. And Nikola Mirotic signed with FC Barcelona of the Euroleague, though he likely wouldn't have returned to Milwaukee as a free agent regardless.

Nonetheless, the Bucks head into the 2019-20 season as a top contender. With Kawhi Leonard now in Los Angeles, the Boston Celtics weakened by the losses of Kyrie Irving and Al Horford and Brooklyn's Kevin Durant unlikely to play this season, the Philadelphia 76ers likely are the Bucks' biggest threat in the East.

Below, we'll break down the schedule Milwaukee will face as it seeks the title it couldn't quite achieve a year ago.

If ever there was a team that seemed constructed to slow down the Greek Freak, it's this iteration of the Sixers.

In adding Al Horford, the Sixers brought aboard one of the few players who has had some measure of success dealing with Antetokounmpo.

The Sixers can also utilize Joel Embiid on the reigning MVP, who is big enough, strong enough and athletic enough to cause him some issues. And the Sixers are big in general, with Ben Simmons a third option to guard Antetokounmpo and the 6'6" Josh Richardson their shortest starter.

So the Sixers have the players to face Antetokounmpo one-on-one. In a 130-125 win over Milwaukee last March, the Sixers did just that, and Antetokounmpo went for 52 points, partly because he finished 19-of-21 from the charity stripe. 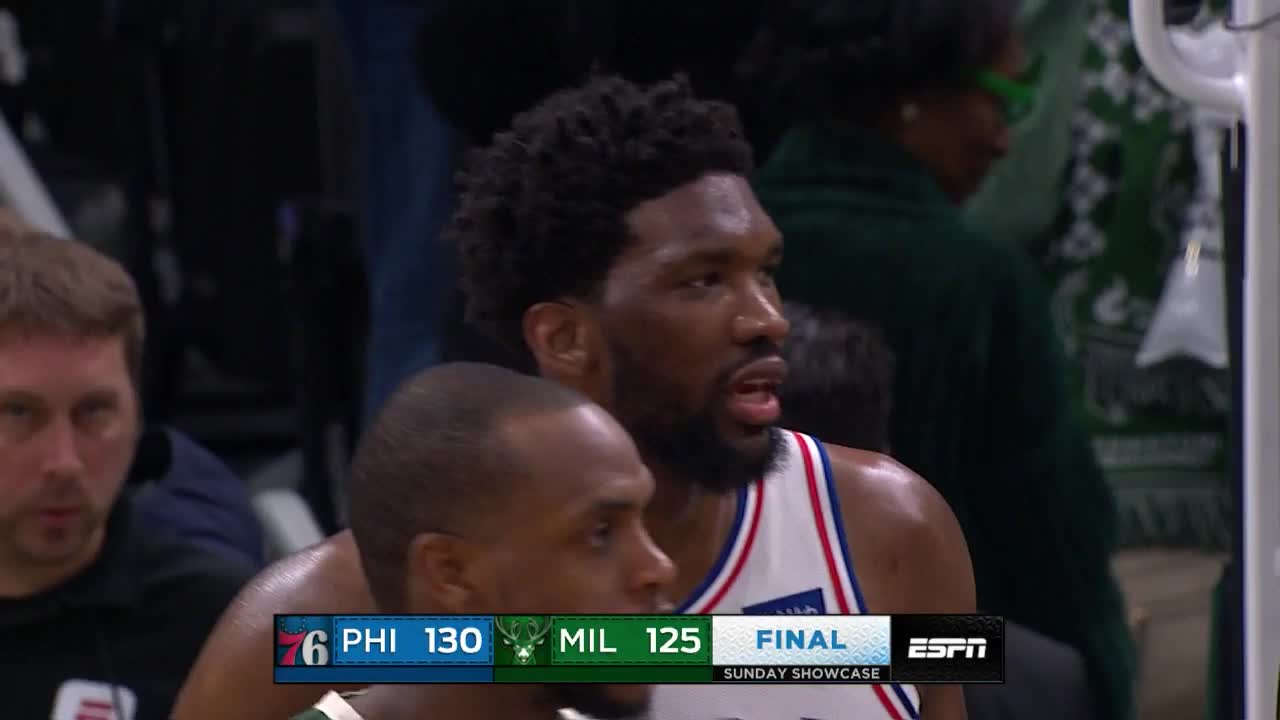 One of the knocks on the Bucks is that they don't have a true superstar to pair with the Greek Freak, a fact that becomes apparent when Antetokounmpo struggles. Leonard and the Raptors held him to 20.5 points per game in their four wins over the Bucks in the Eastern Conference Finals—modest marks by Antetokounmpo's lofty standards—versus 27 points per game in Milwaukee's two wins.

In those four losses, Middleton averaged just 14.7 points (though to be fair to him, he did score 30 points in Game 4), Eric Bledsoe averaged 11 and Lopez averaged 14.5.

The Bucks simply don't have a second player capable of consistently lifting them to wins against elite competition if Antetokounmpo isn't firing on all cylinders.

Most teams don't have players capable of giving him issues one-on-one, so the Bucks generate a ton of clean perimeter looks when help shuffles toward the paint. The Bucks, at their best, beat you with both Antetokounmpo dominance and total team offense.

But the Sixers have defenders in Horford and Embiid who can frustrate Antetokounmpo on his drives to the basket, perhaps enticing him to settle for threes (where he's shot just 27.7 percent for his career). And it will also allow them to stay home on Milwaukee's shooters, forcing them into tougher looks.

Obviously, the risk is that Antetokounmpo just wills the Bucks to victory, regardless. He's good enough to do just that, and he averaged an incredible 43 points against the Sixers last season as Milwaukee won the season series, 2-1.

With Horford on board this season, though, the Sixers should be even better equipped to deal with the Greek Freak, and watching that matchup will be fascinating.

The Bucks are the favorites to win the East and the resounding favorites to be kings of the Central Division. But don't sleep on the Pacers.

Despite being without star guard Victor Oladipo for 46 games last season, the Pacers still finished 48-34 and earned the fifth seed in the postseason, where they were unceremoniously swept by the Boston Celtics.

They improved this offseason, though. For one, Oladipo—their leading scorer the past two seasons—will be back in action at some point once he recovers from a ruptured quad tendon.

The addition of Brogdon was huge as well. His defense, shooting (40.8 percent from three for his career) and playmaking will be a major bonus in Indiana's backcourt. The eventual pairing of Brogdon and Oladipo should fit together seamlessly and is arguably the best backcourt in the East.

Plus, Brogdon's return to Milwaukee will add even more intrigue to the matchup.

The Pacers also improved on the wing, adding two scorers in T.J. Warren and Jeremy Lamb, who are each capable of giving them buckets in either a starting or rotational role.

Add in the big-man pair of Myles Turner and Domantas Sabonis, and the Pacers are legitimate contenders in the East. They don't have the overall star power of the Bucks, Sixers, Boston Celtics or Brooklyn Nets, but they have a well-constructed roster that should be tough defensively, with some added scoring punch brought aboard this offseason.

Milwaukee won the season series last year, 3-1, but expect the Pacers to be an even tougher opponent this time around.

The Bucks are going to be really, really good. They have the best player in the Eastern Conference in Antetokounmpo and a roster built to maximize his talents that fits into the modern NBA's emphasis on floor spacing and three-point shooting. They are built to succeed in the regular season.

The question surrounding this team is whether its ready to take the final step to become champions.

Will Middleton play like a true second superstar after signing a five-year, $178 million contract extension this offseason? How much will the absence of Brogdon—who was at times Milwaukee's second-best player during last year's playoffs—hurt this team? Can Bledsoe finally overcome his postseason woes, where he's averaged just 10.3 points per game and shot 25.5 percent from three?

As much of a feel-good story as the Bucks were last season, the summer of 2021 looms over the franchise. That's when Antetokounmpo can become a free agent. Building a championship-winning team around him should be the organization's only goal, or they risk losing him in two years.

So yes, the stakes are high in Milwaukee. They're good enough to roll through the regular season, but the postseason is where the future of the organization may be decided.