Golden State Warriors forward Draymond Green acknowledged after Saturday's 110-99 win over the Portland Trail Blazers that he's allowed himself to get too caught up in arguing calls with officials in the past.

Green was excellent in Game 3, posting 20 points, 13 rebounds, 12 assists, four steals and a block, and he said a greater focus on the game played a role:

"I think it definitely helps the energy of the guys. I still like to pick and choose my spots. Sometimes I may take a tech, but that's more mindful than just getting a tech. Sometimes I know like, 'All right, I need an energy burst, maybe I'll take one.'

"But sometimes I'm not mindful and I'll get a tech, and that will just kill the energy of our team. I've been really focused and locked in on that, and I realized I got to a point where I was doing more crying than playing. I'm sure it was disgusting to watch because I felt disgusting playing that way, and I just wanted to lock back in on the game."

"I don't even know what to say about Draymond," Steve Kerr said. "He was like a wrecking ball out there. He was just destroying everything in his path. The pace that he was generating was incredible, and it just seemed like he never got tired. ... It's one of the best games I've ever seen Draymond play."

"I mean, his stat line's ridiculous," he said. "Four steals, doing it on both ends, plus-16. But it's nothing new. I've seen him do it for seven years. ... He makes us go, especially when we push that pace. I'm proud of Dray, and he's not satisfied." 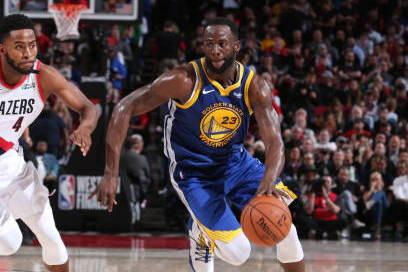 Green noted that his teammates follow his body language, and that his mother, Mary Babers-Green, and his fiancee, Hazel Renee, have helped him better channel his energy after he picked up his fourth technical earlier in the postseason.

He's trying to avoid getting a seventh technical of the playoffs, which would lead to a one-game suspension.

"I understand that officials aren't perfect, and I still have conversations with them now when they miss a call, but it's completely different conversations. You know, my mom has been really big [in helping me]. My fiancee has been really big [with] just talking to me about that and just telling me to stay locked in on the game. I also have some little ones at the house that's enjoying watching me play. I don't necessarily want them to see that. So just try to be more mindful of it."

With Kevin Durant still out injured, Green has done his part to give the Warriors a commanding 3-0 lead, with Game 4 set for Monday at 9 p.m. ET in Portland.