The Utah Jazz are reportedly expected to initiate offseason trade talks with the Memphis Grizzlies about Mike Conley after failing to acquire the point guard before the NBA trade deadline in February.

Kevin O'Connor of The Ringer reported the update Wednesday, noting "multiple league sources said this week that the Jazz are expected to make another push" for the veteran guard.

Conley bounced back from an injury-plagued 2017-18 campaign to average a career-high 21.1 points along with 6.4 assists, 3.4 rebounds, 2.2 threes and 1.3 steals in 70 appearances this season. Among point guards, he ranked sixth in ESPN's player efficiency rating and ninth in ESPN's real plus-minus.

Despite his individual success, the Grizzlies posted a 33-49 record and finished 15 games shy of a playoff berth in the highly competitive Western Conference.

After the regular season ended, Conley admitted he's been dealing with mixed feelings about wanting a realistic chance to chase a championship and being comfortable in Memphis.

"I want to win a ring, man, ultimately," the 31-year-old told reporters in April. "I think that's everybody's goal, especially once you get older."

The team's No. 4 overall draft pick in 2007, the Ohio State product has two guaranteed seasons left on a five-year, $152.6 million contract he signed in 2016. That deal could be a trade deterrent for many of the league's top teams that lack the cap space to add another max player.

Utah won 50 games for the second time in three years this season but got eliminated in the first round of the playoffs by the Houston Rockets. With Ricky Rubio set to become an unrestricted free agent, the Jazz will have financial flexibility, and Conley could fill the void at the 1.

Although it's unclear how close the sides came to an agreement ahead of the deadline, the Jazz appear ready to make another run at finding rising star Donovan Mitchell a more dangerous backcourt mate.

Quin Snyder and Jazz Are Prepping for a Lot of Unknowns 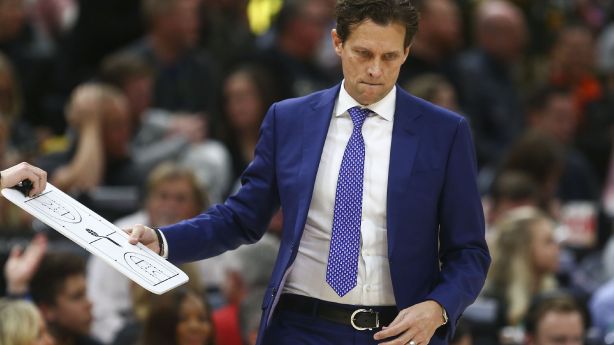 Quin Snyder and Jazz Are Prepping for a Lot of Unknowns