BOULDER, Colo. — He's trying to explain this one-in-a-million shot, and the captivating tale is sounding more improbable by the moment.

Davion Taylor played only one game of high school football. He tried out and was almost cut from his junior college team before a Colorado coach somehow found him while recruiting other players in the talent-rich Mississippi JUCO ranks.

"They told me they wanted me, and I remember thinking, You gotta be kidding me," Taylor says.

He stops there, because to this day, he is still blown away by his remarkable journey from Magnolia, Mississippi, to Boulder. He's trying to explain this unthinkable metamorphosis, and it's just not working.

"I wouldn't have believed it. I absolutely wouldn't," he continues. "Even now I sometimes catch myself doubting myself. How can a kid from Magnolia, with all of those obstacles, be here at this level competing against people who have been playing high school football and have played all of their lives?"

So why didn't Taylor play in any more high school football games? His mother's religion forbade it.

The Sabbath for Seventh Day Adventists is observed from sunset on Friday to sunset on Saturday, when Adventists refrain from secular work and recreation to honor the holy day. Since high school football games in Mississippi are played Friday nights, it created a problem. A big problem. 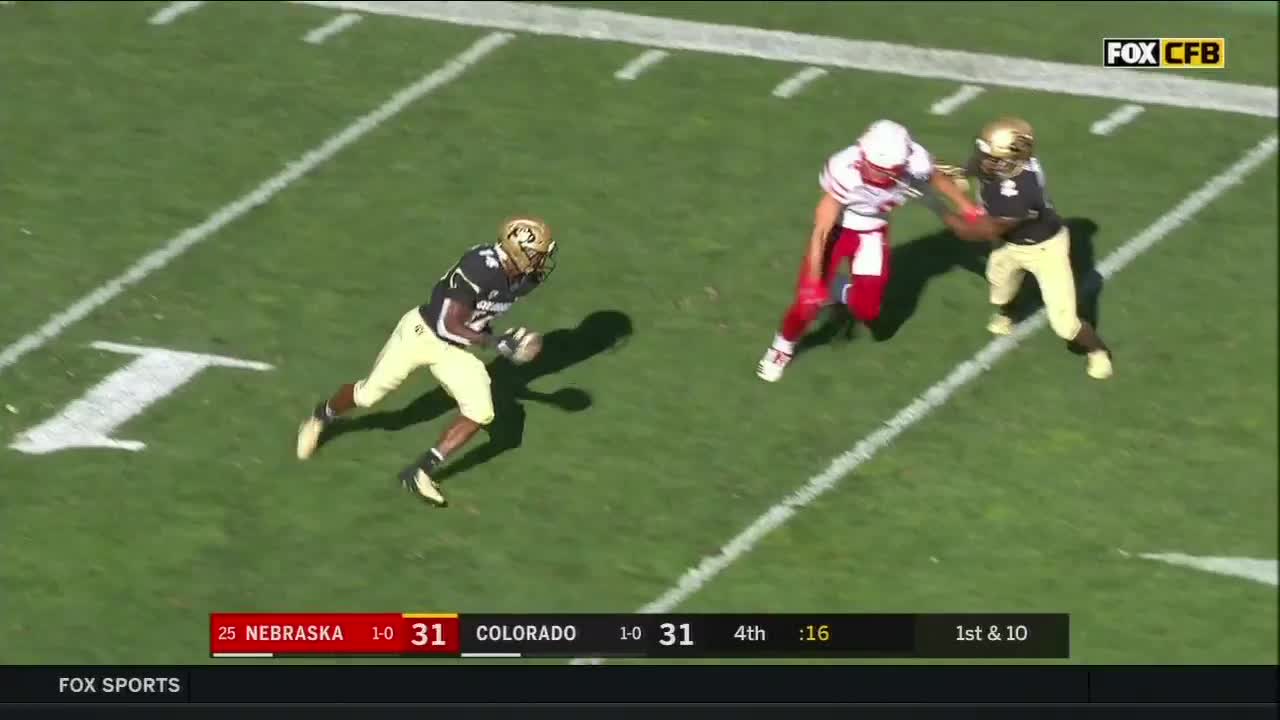 "I wouldn't allow it," Davion's mother, Stephanie Taylor, says. "As long as he lived under my roof, he followed my rules."

Stephanie, a single mother raising two boys in an old cotton mill town in southwestern Mississippi, decided it didn't matter how many jobs she had to work—her boys would get every opportunity to succeed. So, the idea of strictly honoring the Sabbath wasn't a price to pay—it was the way Davion was taught to live.

Commit to something and never waver. Be honest and sincere in your core values and beliefs. Respect everyone you meet.

Those characteristics help when your friends don't know why you can't play football games. When high school coaches—"more than one," Davion says—offer to pay your mother so you can play.

They help when you practice all week with your high school team and are sitting in the locker room late Friday afternoon while everyone else puts on their uniform and gets ready to play. The other players run out on the field, but you walk two lonely blocks home—the setting sun preventing you from joining your teammates. With tears in your eyes, you trudge through the door before curling up under the bed covers so you can hide from your mother and at least watch the game as your friends Facebook Live it for you.

There was one game, the first of Davion's senior season, when Stephanie relented. It was late August, when the sun doesn't set in Magnolia until about 8:30 p.m.—just enough time to play two quarters for South Pike High School. Stephanie let him play the entire game.

"He was unbelievable out there. Best guy on the field," says Jason Tillmon, South Pike's center and Davion's best friend since they were eight years old. As a cornerback, Davion "was all over the field, making tackles, had an interception," Tillmon says. "Anyone who was on that field will never forget it."

Stephanie knew she was wrong to disobey a central tenet of her religion by allowing Davion to play, and it never happened again. He never played in another high school game.

Later that season, his friends offered to sneak him in and out of the house on game nights so he could watch in person. Your mom will never find out, they promised, just like his older brother LaDarrius' friends promised him years earlier, when Stephanie refused to let the best quarterback at South Pike—maybe ever—play a down.

"When he was in ninth grade—in ninth grade—he could throw the ball 70 yards," says John Culpepper, who coached the Taylor boys in middle school and was their father figure. "Once Davion grew into his body, you could see the same talent in him."

But it didn't matter, because regardless of the talent and potential in both boys, those traits didn't outweigh Stephanie's religious beliefs. All along, though, Stephanie told her boys they were free to make their own decisions when they turned 18.

So when Davion turned 18, he took those four measly quarters of game tape from South Pike and started pursuing what almost everyone else considered a pipe-dream.

"The tryouts were on Friday," Davion says. "And because of my religion, I had to call and ask if I could try out on Thursday."

He was invited to camp and moved from defensive back to linebacker (he knew nothing about the position), and was one of three players vying for one spot. Were it not for another player's injury, which opened another slot, Taylor says he likely would've been cut.

By the end of November, despite his inexperience, he had started the last three games of the season. A few months later, during spring practice, Colorado assistant coach Ross Els was recruiting at Mississippi junior colleges when he called Buffaloes head coach Mike MacIntyre.

"He says, 'Mike, I found a linebacker.' So I say, 'Tell me about him,'" MacIntyre said. "He says: 'He was a backup linebacker and played special teams and started three games at the end of the season. He's really athletic, and I just watched him run in a track meet—and he ran the 100 meters in 10.6 [seconds].'"

"Then Ross tells me he didn't play high school football," MacIntyre continues. "He says: 'This kid is different. He's a 4.0 student; he's 220 pounds and can run. You look in his eyes, and they're bright and beaming. He'll start for us next year.'"

He'll start for us next year.

So Colorado flew Davion and Stephanie to Boulder. They fell in love with the university, and the Buffs staff fell in love with Davion—a player with four quarters of high school football and three starts at an obscure junior college on his resume. Colorado offered him a scholarship after his freshman season.

Davion still had one year to play at Coahoma. There were two ways Colorado could lose him: An SEC school could become interested—which happened when he blossomed during his sophomore season and became the nation's No. 1 JUCO recruit at outside linebacker, per 247Sports—or he could fall victim to what he described as the unsavory element at Coahoma.

"I made sure I stayed cool with everyone—I wouldn't say friends—but stayed cool and stayed in my room and made sure I didn't get in any trouble," Davion says. "I got lucky with my roommate. He played football and was down-to-earth. If I would've been in a room with a gangster or some dude that was bad for my life, I probably would've ended up in the same place as them now."

Of the SEC schools that expressed interest, none came after him harder than Ole Miss, which is four hours north of Magnolia—instead of 19 hours northwest.

He wanted the challenge of playing at Colorado—but he didn't want to leave his mother behind. That became a moot point when she encouraged him to head to Boulder.

"I told him, 'You need to get out of town, some place where I can go visit,'" Stephanie says. "He needed to grow into a man. He needed to be away from momma. I think it was a great move."

It took 15 spring practices and one fall camp for Davion to do exactly what Els had predicted when he first saw him: start on day one for the Buffs. When Colorado began its season Aug. 31 in a rivalry game against Colorado State in Denver, Davion stood in the most massive stadium and in front of the largest crowd he'd ever seen.

He thought those 500 fans at Coahoma games were loud, but this was ridiculous. His knees were shaking and his ears were ringing as he stood on the Broncos Stadium at Mile High field for the first play on defense, with all of 13 career games under his belt (one in high school, 12 in junior college).

"It's a story that's truly unbelievable," Tillmon, Davion's best friend, says. "When he left, I told him, 'I know you're going to be great. Just do what your brother never got a chance to do and put our city on the map.'"

Davion says he knows what some people are thinking: "Why are you playing on Saturday now? That's still the Sabbath," he says.

To that, he answers: "I believe God is on my side the whole way. There's no way he'd let me make it this far if it's not meant to be."

Colorado plays host to UCLA this weekend in its Pac-12 opener. The Buffs are 3-0 and, like in 2016, represent an early feel-good story. They made it all the way to the conference championship game two years ago and will get there again if the defense grows into a force like the 2016 unit did. That defense caused turnovers and made big plays at critical moments.

Taylor has done that already. He scored the Buffs' first defensive touchdown of 2018 in a 45-14 victory over New Hampshire, picking up a fumble and taking it 14 yards to the end zone.

"The more people see him, the more everyone is going to know about him," MacIntyre says.

"He's not our secret anymore."