The Oklahoma City Sheraton is about a three-hour drive from the family home in Keller, Texas, and while it was not exactly Lee and Midge Muncy's dream vacation spot—especially when they have a getaway in upstate New York's Finger Lakes region—what else were they going to do last summer?

Their son, Max, had been released by the Oakland A's in March 2017, signed by the Los Angeles Dodgers and dispatched to the minor leagues. The 2012 fifth-round pick was clinging to his baseball life from the edge of the Triple-A cliff.

"That was home for me last year," Max Muncy, 27, says of that Sheraton. "Where I spent a lot of nights. It's just kind of how it worked out."

So back and forth they went, Lee and Midge, from Keller to Oklahoma City, watching their son, supporting him, hoping against hope that the major leagues would still have room for him before his bat-swinging days were finished.

"It's kind of hard to let go like that," says Midge, 64, speaking for her son. "Because you're not ready to give it up."

Max's breakout season for the first-place Dodgers is a testament to sticking it out, a shining beacon to all those who follow their dreams, with persistence often boxing out reason. For all those who refuse to give up.

From his perch among the National League home run leaders, where he ranked fifth with 24 at midweek, and speaking just days after swatting his way past the Chicago Cubs' Javier Baez in the first round of MLB's Home Run Derby, Muncy knows the Oklahoma City Sheraton is a place that will remain with him always.

The utility player arrived in Oklahoma City after the season started. His teammates already knew each other and were sharing apartments. "There was a team-special rate of less than $100 a night" at the Sheraton, says Muncy. "I started adding up how much an apartment was, furniture rental, and it just made more sense. Plus you rack up points."

The Sheraton was downtown, so Muncy would walk to the ballpark every night. "It was interesting because at no point during the year did I have an actual home," he says. "But that's kind of how it is in this life."

That's the thing that makes Muncy's 2018 rise all the more wipe-your-eyes unbelievable. The guy was buried in Triple-A all last summer, hitting .309 with 12 homers. And it wasn't exactly like his five career major league homers and .195 batting average in 96 games screamed for a second look.

Then came a new year, a fresh canvas and that extra coat of persistence.

"The first week-and-a-half, two weeks of spring training, I don't know if he made an out," Dodgers third baseman Justin Turner says. "It's been fun to watch. Fun to watch him absolutely dominate the strike zone."

Muncy did not break camp with the Dodgers but was summoned from, yes, Oklahoma City on April 17 after infielder Logan Forsythe injured his shoulder. In his first game, in San Diego, Muncy cracked a pinch-hit single. In his second at-bat the next day, Muncy ripped a home run off the Padres' Luis Perdomo.

As he rakes, his teammates have moved from intrigued and wowed to wholly appreciative. Not simply of Muncy's emergence, but also of an organization that continues to dominate the secondhand market the way Muncy dominates the strike zone.

"It's a good thing that, compared to other teams, we know how to find talent," closer Kenley Jansen says. "It shows you why they talk about the depth we have in this organization."

Says Turner: "I think it's a product of the culture we have around here, the environment. The way everyone is treated. I've been on teams where there is an obvious separation between the veterans and the young guys. That doesn't exist here. When someone comes up, we see him helping us win ballgames. We see it with Muncy now; we saw it with Belly [Bellinger] last year."

Always, Muncy has known his way around the strike zone. Dodgers starter Ross Stripling faced him in high school (Stripling pitched for Carroll High in Southlake, Texas) and in college (Muncy played at Baylor, Stripling at Texas A&M). Though they didn't get to know each other until both became Dodgers, Stripling certainly knew enough of Muncy to try to avoid him when they were in school.

"He's always been a guy who absolutely commands the zone," Stripling says. "If you throw it over the middle of the plate, he's going to whack it. He's always been that guy. My two losses against Baylor were basically his fault. I think he hit a game-winning single and a game-winning sacrifice fly off of me my junior and senior years."

Stipling says he thinks Muncy struggled with the A's because he wasn't getting consistent playing time: "He was playing all over the place and was having a hard time finding a routine. Over here, he got in the big leagues and got a chance to show what he could do everyday, which is command the zone, get on base and hit for slug [slugging percentage] when pitchers make mistakes."

Muncy says his hitting coach in Oklahoma City, Shawn Wooten, and his father helped him fine-tune not only his approach at the plate, but also his mental game during the difficult times in 2017. After his release from Oakland and before the Dodgers signed him, Muncy and his agent even investigated professional opportunities in Japan and South Korea.

"It's been a whirlwind of emotions, a whirlwind of talks, not knowing if I was ever going to play baseball again," Muncy says. "Was a team going to give me a chance? Was I ever going to make it back to the major leagues? Was I going to be a career minor leaguer? You never know. There are not really words for me to describe it other than crazy and unbelievable."

Lee Muncy says he thinks the turbocharge that boosted his son into this new stage of his career is confidence born of desperation.

"I think when they released him he realized, 'I can't be conservative. I have to be more aggressive and sure of myself,'" Lee says.

Max agrees, and as he speaks, the metaphorical odometer counting the miles between him and that Oklahoma City Sheraton continues to practically do cartwheels, the distance traveled so mind-blowing. Take the Home Run Derby, for instance.

"Incredible experience," Muncy says. "It was something very special to me, especially having my dad there. Growing up, it was something my dad and I always watched together. Obviously, you had the All-Star Game, but we always thought the Derby was the coolest thing to watch, and having him there was very cool."

As Lee, a geologist in the international oil and gas industry, sat watching the Derby, there was this, too: So far, the family has made one journey to Los Angeles this season to watch Max. It came during the first Dodgers homestand after he was called up to the majors. In town that late April weekend were the Washington Nationals.

Forget the past year. Simply from April to now, who could have conjured up this?

"You know what?" Midge says. "We've learned to just go with it."

Then, after the Derby, Max disappeared with his family to their vacation home in the Finger Lakes, and next thing he knew, not only were the Dodgers acquiring superstar Manny Machado, but everyone was speculating on whether Max would be asked to give up his No. 13, which had been Machado's jersey number with the Baltimore Orioles.

"I was never asked. I was never told anything about it. I just know I was at our family lakehouse, found out we got Machado, and we were all excited," Muncy says. "Me and my family were talking about how he probably would want that number, and what number would you go with now?

"I didn't know what was available, what numbers can I get. So I started thinking about it, but I never received any calls, texts, emails ... then I showed up in Milwaukee and everyone said he had chosen No. 8. I was fully prepared to give up No. 13."

Max Muncy and the other Dodgers infielders confer during a pitching change.Dylan Buell/Getty Images

Instead, as he solidifies his MLB resume one home run at a time, maybe this simply is the latest indicator that in his seventh professional season…with his second organization…as he bounces around the infield from third base to second base to first base, even playing some outfield as well…maybe Maxwell Steven Muncy has finally made it.

Dare he feel that way?

"I should have had a moment like that," he says. "But I think because of how crazy this year has been, I still haven't."

He thinks for a minute—another strike zone to conquer tonight, a Los Angeles stretch run close enough to reach out and touch, the Oklahoma City Sheraton still there but fading in his rear-view mirror.

"Probably," he continues, "that's helping me out in not getting content with where I'm at."

Things to Know as Los Angeles Prepares for Season 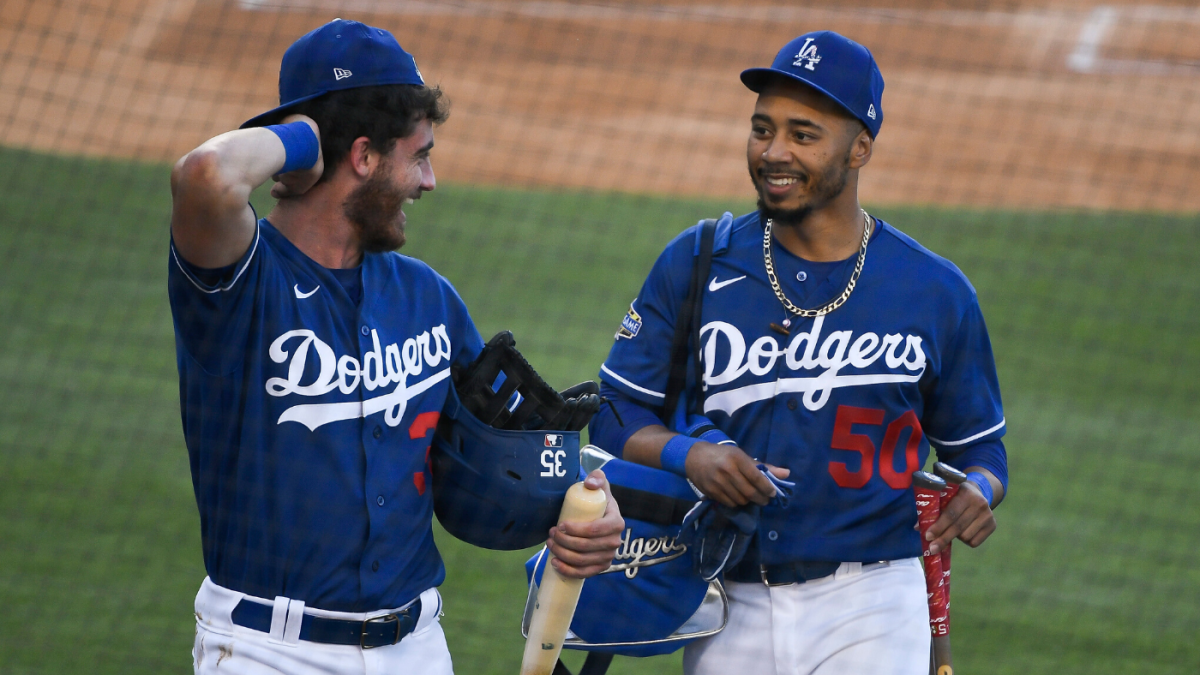 Things to Know as Los Angeles Prepares for Season

Kenley Jansen Reports to Camp After Recovering from COVID-19 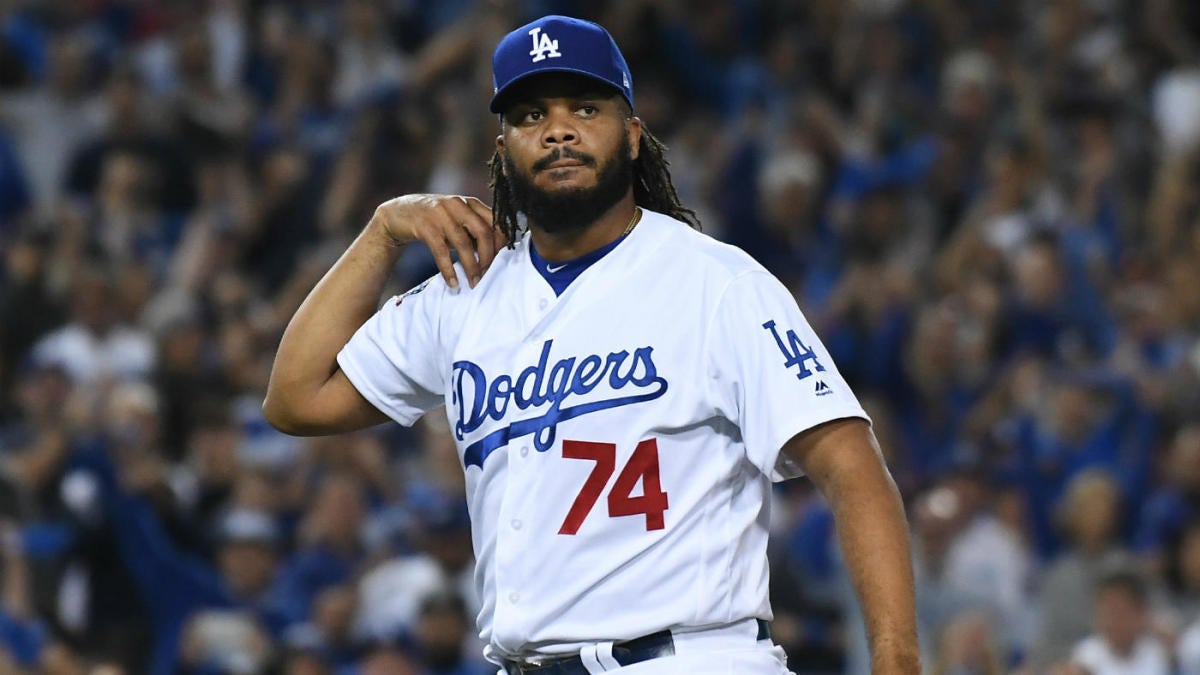 Kenley Jansen Reports to Camp After Recovering from COVID-19